Invisible Ink is one of the many party games that I brought back from Essen in 2017.  I find that I have a bunch of party games in my collection, and while many of them are similar, the ones that stick around are those that bring a new twist or gimmick to the genre.  This particular game uses red-film glasses in a mechanism that is new to me.

The story here is that all the players are secret agents, and they’re trying to communicate with each other.  One player each turn is the message bearer – and he will use a yellow highlighter (which in this game is cleverly disguised as a bottle of nail polish) – and he will try to draw his secret message on a piece of paper.  The secret message is found on one of 200 double sided codeword cards.  The other spies are all looking at him do this, and the first person to blurt out the correct answer will score points.  They have to do it quickly, because there is also a sand timer counting down, and in order for points to be scored, you have to beat the time limit.

So – that sounds pretty dull so far.  But, here’s where it gets better.  At the start of the round, a die is rolled, and based on the results, different groups of people will have to put on the red film glasses.  It might be receivers.  It might be the person drawing.  It might be everyone!  So, fun fact here that I learned when playing this for the first time – yellow highlighter can’t be seen thru red film!  So…. There will always be someone who can’t see the picture – sometimes, no one can see the picture!  This invariably leads to much laughing/chortling – usually when whoever is wearing the glasses finally gets to take them off and see what picture is actually on the paper!

There are actually two different types of games included – a BLUE game and a BLACK game.  Each has its own deck of cards.  We have tried them both so far, and each has a different feel.

In the BLUE game, the player gets a codeword card that has two different words on it.   There is a green primary word as well as a secondary blue word.  They tend to be related in theme but not in appearance.  Examples would be: Baby bottle/Milk, sailboat/waves, umbrella/cloud.  In the round, the main goal is to get someone to say the green primary word.  If this happens in the time allotted, both the answerer as well as the illustrator score 2 points.   If during the round, someone also said the blue secondary word, both involved players score 1 point for that.  The round immediately ends when the green word is said though, so the timing and order is important. 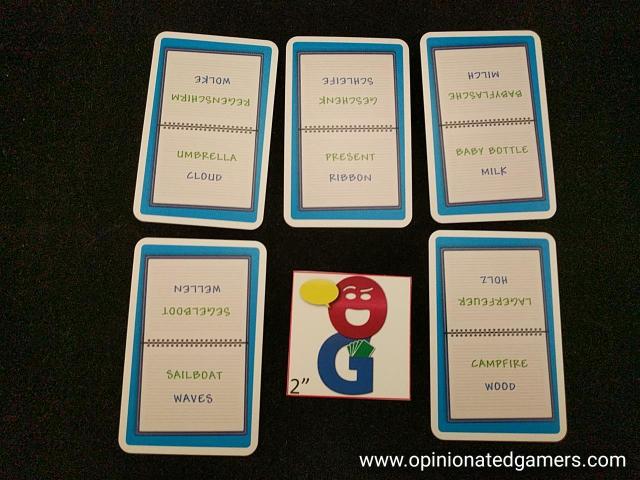 In the BLACK game, the codeword cards are a little different – as are the scoring rules…  The cards here still have two words, but now they are things which can look alike or are very often associated with each other: Sleepwalker/Zombie, Christmas/tree, donut/ring, suitcase/bag.  Here, the challenge is different.  The illustrator needs to get someone to say the primary word (for a 2 point score) without anyone saying the other word (which becomes a 1 point penalty for both involved players).  While this seems easy enough to do, some of the pairs of words are really difficult to separate. 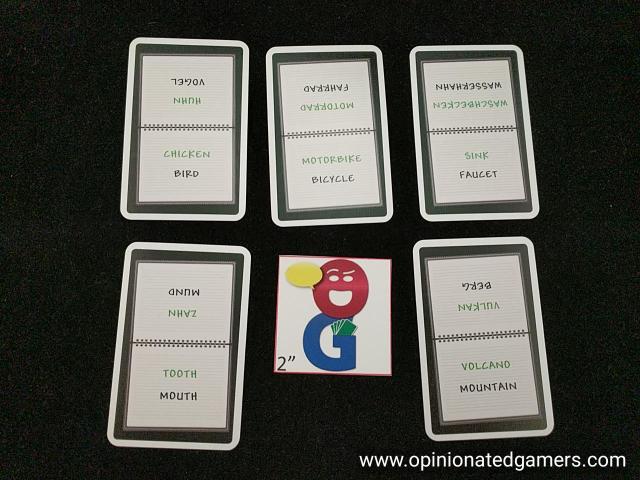 The victory point pool is set at the start of the game with 10 points per player put into it.  In practice, this turns out to be usually around 3 full turns around the table in our experience thus far.  This is honestly right around the time when everyone has had enough of the game, so no complaints there.

While I’m normally not a big person for house rules, I am a bit more relaxed about them when it comes to party games – partly because the point is usually not to win or lose as much as it is to enjoy time with friends and laugh a bunch at everyone’s ridiculous illustrations.  After my first game, it was recommended to just ignore the die, and play three full rounds.  In the first round, the illustrator always wears the glasses.  Then in the second round, only the answerers wear the glasses.  Then, in the third and final round, everyone wears the glasses.   It seemed weird for the different players to have different experiences just based on their inability to roll the die to the fun side – and this rule makes it better for everyone (well, at least in my opinion).

The cards are fairly diverse, and we have found that it’s probably best to let people have a mulligan if they pull a card that they don’t understand – or maybe one that has a dodgy translation from the German to English.

Of the two different forms, I think I prefer the BLUE game – it’s just more spontaneous and fun.  When you have the poison word, the word combinations are sometimes too hard – and then no one can answer the real word… and, the whole rules about penalty points and sitting out and whatnot are clunky.  In a game where people are yelling out words willy-nilly, it’s hard to sometimes pick out who said what in the heat of the moment.  But, of course, YMMV, and I think it’s great that the game gives you two different options to play – so you can do whatever you want!

I’ll never ask to play a party game, because I guess I’m just not a party kinda guy.  But this is one that  I wouldn’t mind playing, so that’s an endorsement of some kind at least.  And, since I like the gimmick, this is a game that I’ll probably keep around for those times when a party game is appropriate.

No really – you can’t see the highlighter!!

James Nathan: It was fine. I’ve recently realized that one of the great tricks that Codenames pulls, which you don’t even realize, is that you know all the possible guesses.  Here’s what I mean – when you play other drawing/describing guessing games (e.g. Pictionary, Catchphrase, Concept, Word Slam, Crosstalk, etc.) the possible answer pool is largely limitless. While I like or love many of those games, their weakness is the unevenness of some of the clues. Sometimes your Concept word will be the name of a French novel that may be well known in France, but is quite obscure in the United States.  Other times it will be something almost trivial to guess.  The hidden genius of Codenames (and the later rounds of Celebrities/Time’s Up/Monikers) is that you know the game’s whole dictionary so it smooths out the ubiquity/obscurity landscape of the possible guesses. I think Invisible Ink also manages to escape this vocabulary pool problem, but unfortunately, to me, it’s through making the clues largely too easy.  In my one play it was simply too easy to guess.

Karen ML This is another party game that I think non-gamers or family gamers would have fun with. As James Nathan says, guessing wasn’t that hard, so if you want a casual, fun party games, this will fit the bill. It wouldn’t be difficult to make it more difficult by making the clue cards trickier. I also like Dale’s suggestion of skipping the die roll and just having equal rounds where each person takes a turn under the 3 types of drawing experiences.