Face Cards is one of the many party games that I brought back from Essen in 2017.  I find that I have a bunch of party games in my collection, and while many of them are similar, the ones that stick around are those that bring a new twist or gimmick to the genre.  This particular game breaks the rule because it doesn’t really offer anything groundbreaking – but I will say that it does it well and has never failed to cause lots of laughter.  I suppose the one novel thing is that this is the only party game that I have which I am also a part of.

What does that mean?  Well, at the Ravensburger press event, each of us was given a copy of the game as a party favor.  I was surprised (and a bit humbled) to see that each press member got a personalized copy of the game.  Included on the top of the deck was a card with my name and picture on it!  Sure, it’s kind of a gimmick – but it definitely has make me show it to other people when they ask about my Essen games, and once they see it, it usually means that we end up playing it…  (And of course, here I am now writing about it!)

So, the game is made up of large deck of 142 cards – each with a face on it.  (Well, my deck has 143 as I have my own card…)  There are three different categories of cards – humans, animals, and inanimate objects.  Though, the cool thing is that all of the inanimate objects still show a “face” on their card! 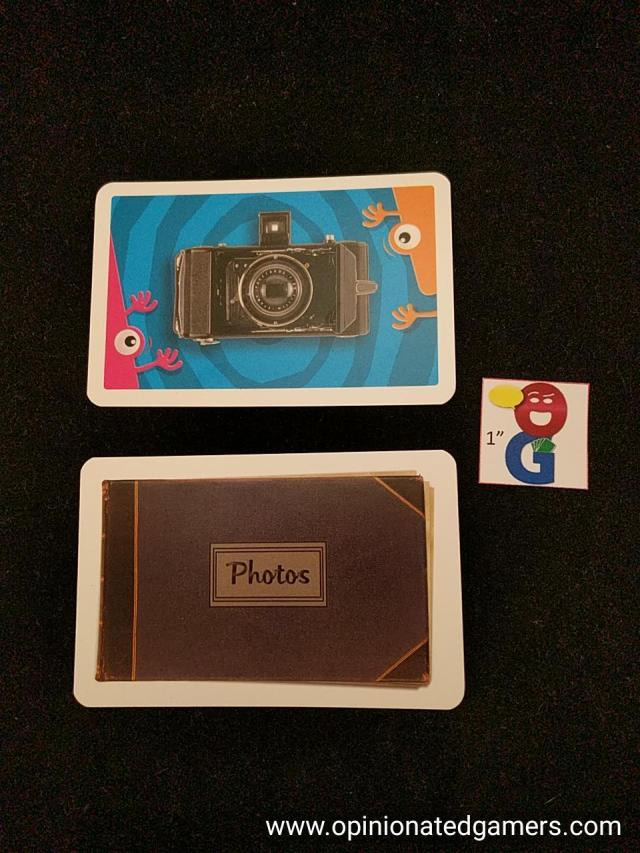 Each player is dealt a hand of 7 cards to start the game.  Players look at this hand of card and choose two cards which they think make a good pair.  There are really no guidelines for what makes a good pair – it’s whatever you think works!  It might be that they have the same coloration or maybe they look familiar or share a common feature (two cards with big noses).  It might be that they are thematically related (i.e. George Washington and Eagle).    Just look at the cards and make your best pair.

here is an example from a recent game. can you identify the four pairs that were made? (answer at bottom)

Now, starting with the current start player, you try to identify a “matching” pair of cards – one from the center and one in front of another player.  If you are correct, you and the player who made the pair each take one card of that pair and put it in your scoring pile.  Additionally, if the two cards are of different types (i.e. one human card and one animal card), each of you takes an extra card from the deck as a bonus point.  If you are incorrect, nothing happens.  The other player should make no indication what his matching card is.  All cards remain in the same place.

When the round is over, the start player card is passed to the next player, and all players draw 2 cards from the deck to bring their hand back up to 7.  New pairs are made and the game continues on.  The length of the game (with 5 players) is twice around the table – so ten rounds in total.  At the end of the game, the player with the most scoring cards is the winner.

This is a nice light party game which has come out on a number of different occasions, and it has yet to not provide rounds of laughter.  Like most party games, the goal for me is not to win or lose but for the players to have a good time and be entertained by the game.  The humorous pairings that people come up with here are a blast.

In concept, this is similar to Dixit, Attribut, or Apples to Apples… or even maybe Cards against Humanity – where your goal is to match up cards that you think certain people have played.  Those games, when viewed as games, sometimes fall apart because they rely too much upon knowing what other people are like (especially when they are in charge of the scoring).  This game seems to mitigate that by having all players able to take a stab at making a pair each round.  Thus, it’s harder to take advantage of knowing another player better because everyone will be making a guess at the cards.

The only frustrating thing that I’ve found in the game is that sometimes you can get stuck with a hand of cards that just don’t match up for you.  But, then some of the fun is still trying to make the best pair you can, and then hopefully someone else will share your inspiration and guess it correctly.  If nothing else, you still get a chance that round to guess to make a pair, so you’ll still be able to get some points on your own.

Here, the vulture could plausibly be linked to the card on either side?  (big noses on left, same smirk on right?)

The game moves along quickly and doesn’t outstay its welcome.  There are enough cards that it hasn’t felt old yet, even after 5 plays. Sure, I think that I’ve seen most of the cards now, but it’s all about the combination of them in your hand.  And google tells me that with 143 different cards, there are 209,004,408,899 different ways to get a 7-card hand.  So it’ll probably be awhile before I have a duplicate hand.

I was a bit worried when I saw the designer that this would be some dry abstract game – and I’m happy to say that I could not have been more wrong.  Face Cards is a lighthearted time which so far has guaranteed laughs and enjoyment.  As I have probably said multiple times this month, I’m pretty much never one to suggest a party game – but this is one that I would be glad to play if someone else requested the genre.  And, thanks to Ravensburger, the fact that I have a card in the game makes it all the more likely that I’ll play this one.

The answer to the example grid near the top:

James Nathan: It was fine. I’ve recently started having to say “that was a joke” after I think I say something funny because I’m only funny to myself to such a degree that you can’t tell when I’m trying to be humorous let alone is your instinct to laugh. In that sense, Face Cards and I are BFFs. Sometimes these matching card games are obviously funny.  Other times they need to tell you when something was funny because it wasn’t observably so.

Karen M: This is a fun party game for family game night. The faces are fun, especially the inanimate objects faces. I’d bring this out for the apples to apples crowd and I’m positive they would have fun with it. It’s also the kind of game where keeping score is pretty much irrelevant; the point if just to laugh and have a good time.