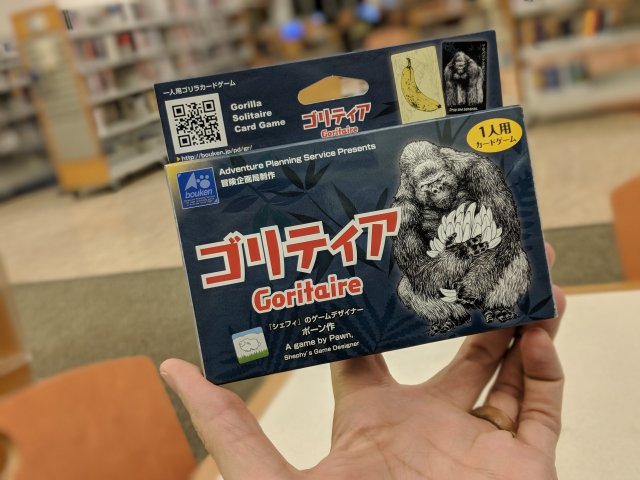 Gödel’s proof is probably my favorite proof, and I’m quite fond of Gödel’s Proof the book. Not for what the proof shows, though we’ll get to that in a minute, but for how creatively he gets there.

Gödel sets out to show that in an axiomatic system, there will always be statements which you cannot prove. He proves that you can’t prove.  That it isn’t “complete”.

From what I remember, he does it by reducing each possible item in an equation to a number, and using a sort of reverse prime factorization, creates a unique number for every possible equation. It’s pretty great. I love the way he hides little nuggets of information in a recoverable way in that one number, and has inspired many Excel formulas that I’ve written.

So I was surprised to learn in the Goritaire rules that Gorillas have a complete language. The rules argue that a grunt means both “I want a banana”, and “Earth’s axis always maintains its orientation, regardless of rotation or revolution.” Further, the rules state that a grunt contains all possible meanings, and ensures mutual understanding.

Here are some examples of things a grunt can mean: 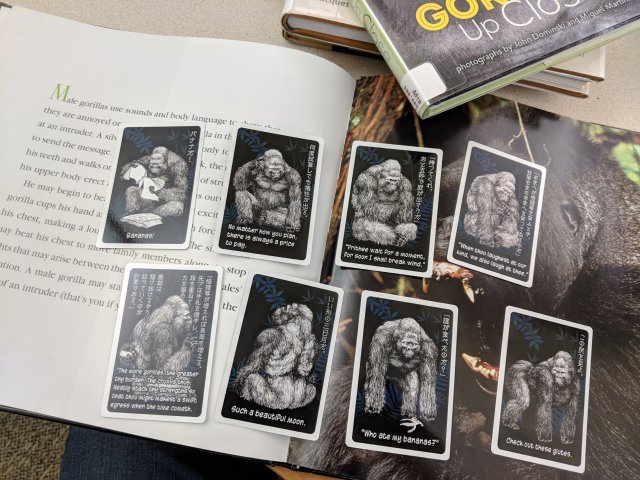 I was surprised to learn this about Gorillas, so I headed to my local library to learn more. This is the only page I could find:

So I headed down to the kid’s section to see what I could learn.

Turns out gorillas have shrieks and chuckles and hiccups and belches. Huh, didn’t get to that in the rules yet. Let’s keep going.

The books did have maps of the gorillas habitats, and I think I remember there being a book out a few years ago about bananas. Specifically, I remember it talking about some bananas which are quite tasty, but simply untransportable, and so will likely remain unavailable for most people to try. Let’s see if Mr. Goritaire is lucky enough.

OK, I’m back. Learned very little about bananas. Mostly the names of quite a few banana diseases and parasites. Helpful tip: if you peel your banana, and the flesh is purple, probably don’t eat it. 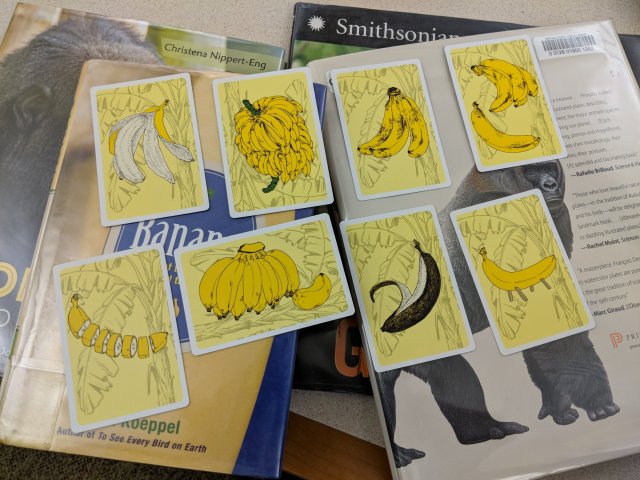 Uhhhh,…so the rules include instructions on some sort of Gorilla seance that makes a hypothetical banana appear from the void. That is an unconfirmed rumor at this point. They also say you can crack open a rock to predict the weather. I’ll try that in the morning and give you an update.

According to the game, gorillas are on the edge of extinction, and they need to increase the size of their band and ensure there are enough bananas to see them through the crisis. You start the game in a phase called “Equality”. Once you’ve established that, you move on to, um, “Mounting”, then “Destitution”, and several other steps.

Shuffle up, draw 7 cards, and begin.

Here is the turn structure:

OK, we can skip step 1, that’s untap your gorillas.

In step 3, you can play one gorilla, and use each of your gorillas for an action. These are fairly routine during “Equality”. Let’s call the first two Reverse Pearl Diver and Mean Wishing Well. You could look at the top card, and either leave it, or put it on the bottom. Alternatively, name what you think the top card is; if you’re right, put it in your hand – otherwise, in the discard pile. Alternatively, you can “binge”, with two of your gorillas, to create some hypothetical bananas out of real bananas in your hand, or “Crescent”, which is that banana seance, but needs three gorillas.

That also means that if you miss on a single banana with the Mean Wishing Well, that you’ll need to conjure even more hypothetical bananas.

So at step 5, if you have more than 7 cards, discard down, and step 6 will check for victory.

Throughout this, your gorillas were placed in a line.

At “Mounting”, your gorillas learn to form cheerleader pyramids. 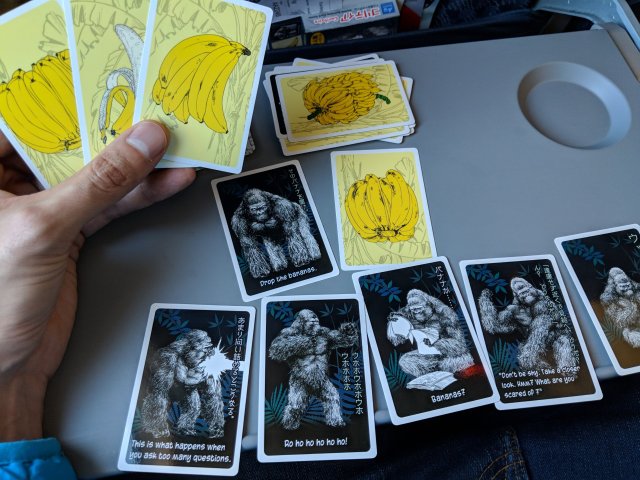 The actions described earlier, are for first level gorillas, or “(1)” as the rules describe them. (2) gorillas have other abilities, such as , err, scapegorilla. You can also use your (2) gorillas as (1) gorillas. In that picture above, you can also see I’ve planted bananas on the second row. During feeding, that (2) gorilla can harvest that planted banana for 1 hypothetical banana.

That (2) gorilla does not count towards the 7 victory gorillas. Plus you’re down to 25 banana cards: you’re starting off 3 bananas short, and may end up well short – as not only does the gorilla on (2) not count towards the 7, but he does count as one you play for the turn when you play him, so you might end up needing 8+ rounds of feeding the pack on the bottom, putting you well short of enough bananas.

What happens at phase 3, “Destitution”? Well, according to the rules, in emergencies, gorillas can fire destructive laser beams from their mouths.

Well, sure. This calls for a visit to a larger library to see what I can learn.

OK, nothing about laser beams in here. 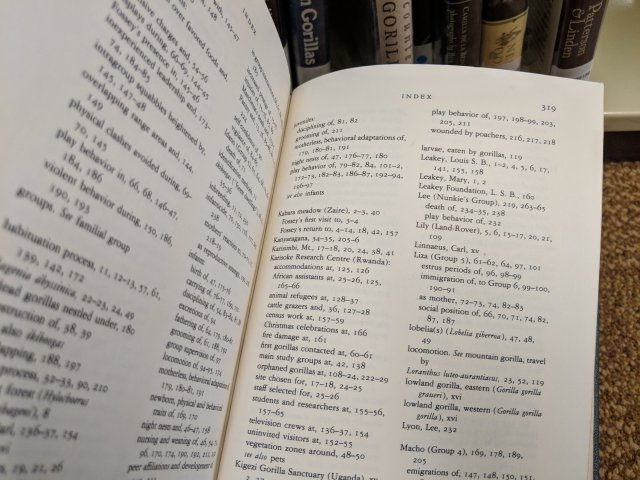 (If it’s any consolation, I also checked the index to Gödel’s Proof, and there was nothing about gorillas.)

Regardless, those laser gorillas get you ready for the “Silverback” phase where you can get third level, (3), gorillas. Eventually you make it to (4) gorillas.

In my Essen posts, I shared my experience of finding Goritaire in my day two post. It was absent from all preview lists I had consulted, and in two days of wandering, I hadn’t found it until the last stop. I’m lukewarm on Shephy at best, and have no idea how I’ve become the solo game reviewer recently.

I guess I didn’t cover how to lose. You lose if you can’t feed your gorillas, or if you need to draw a card during step 2 and can’t. One of the great things about Goritaire is that games are fairly short (the box says 15 minutes), but are quite addictive – when I lose, I’m often 1 or 2 bananas short of feeding my 7 gorillas, and it’s so easy to envision a way in which if you had spent one or two actions differently, you’d be shooting lasers out of your mouth at this point rather than looking around for who took your banana. So you try again.

There isn’t a mulligan mechanic, and dealing with draws skewed one way or the other can be quite difficult. Do you have enough bananas to feed your gorillas? Do you have enough gorillas to grow your clan, or are you in stasis feeding a static number of gorillas for multiple turns?

Between flights home from Essen and to BGG.CON, I had ample time to delve pretty far in here, and I’m still trying to master the best strategy for managing what has become a deck of 18 gorilla cards, and 18 banana cards – where at least 10 bananas each game will need to be summoned from the aether.

I’m very glad I ran across this, and will be on a lookout for whatever Pawn offers us next. 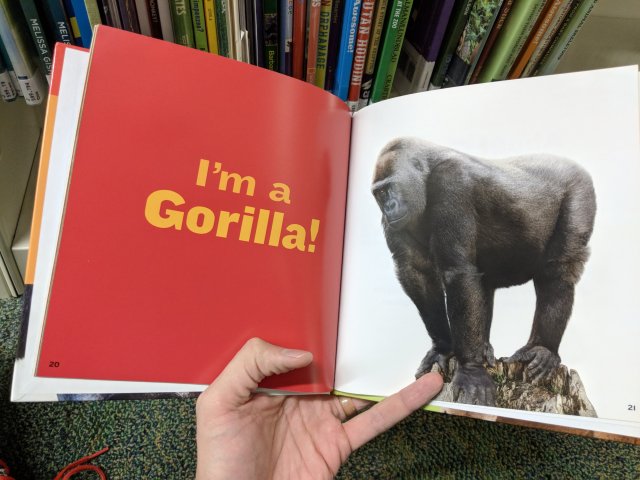 I love it! James Nathan
I like it.
Neutral.
Not for me…