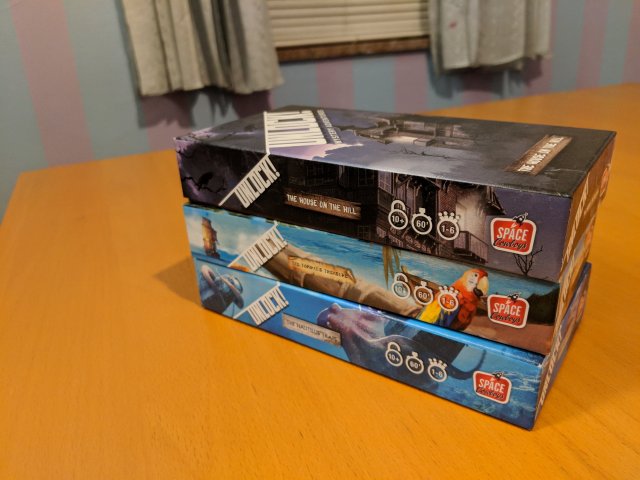 Sometimes I don’t know what I like and all that.  I’m starting this review not knowing what my feelings are on Unlock!.  Let’s go back to the first escape room I’d ever done a few years ago.2

My mind was immediately blown. I’ve subsequently done quite a few more, but still far less than many people I know.  One of those situations where your local circle of influence thinks you’re the expert, but you see yourself at the novice end of a different circle.  As such, folks are often asking for recommendations on local rooms, and I talk about which had good production values, and which had the most creative puzzles, and which felt short for the cost, and I never know what to do with that first one.  It was the most fun, but why?

Then, as things go, I met other rooms, and didn’t like the things the new kid on the block was doing, and wanted him to get off my lawn.  Stickers for “this isn’t part of the puzzle”? Hints in a different way? Labels for which pieces go to which puzzles?

OK, that’s where we were headed.  I was listening to an interview with Scott Nicholson the other day about escape rooms, and he discussed a number of critiques of escape rooms that hadn’t crossed my mind, and these were largely theme based.  E.g. Why is there a blacklight?3 One of the points he covered was a dislike of rooms that are essentially: find a bunch of 3 or 4 digit codes and try them in all the locks.  Perhaps the sources of the digits and the destination of the digits should either be thematically linked, or keyed with symbols to know they are a unit, or be able to be derived from clues and context.4

I think Scott makes good points, but I find something grating about clues that have symbols keying me into what puzzle they are a part of. For me, it makes a room less cohesive, and more like a set of disjointed riddles.

In a sense, this is the Exit or Unlock! discussion to me.  More than the app or the destructive components, Exit tends towards the disjointed set of riddles end of things, while Unlock! seems to default towards dumping a pile of clues.  Which is your taste?

Unlock! attempts to pull off escape-room-in-a-deck-of-cards by using an app, and without any destructive elements.  I said it doesn’t label which clues go with which puzzle, but in another sense it does. Unlock! uses color-coded cards to distinguish between a few things: red cards, blue cards, yellow cards (locks), and green cards (machines).

Red and Blue cards have interlocking puzzle piece icons on the top, to show you that you may be able to combine those cards.  If you have card number 10, and it is a red hammer, and you have blue 33 and it is a ceramic sculpture of a fortune cookie, the mechanic is that you add the numbers together, 43, and then see if the deck of cards has one labeled ‘43’ on the back.5,6 Yank it if you want to try combining those elements.

Yellow cards involve punching a 4-digit code into the app. 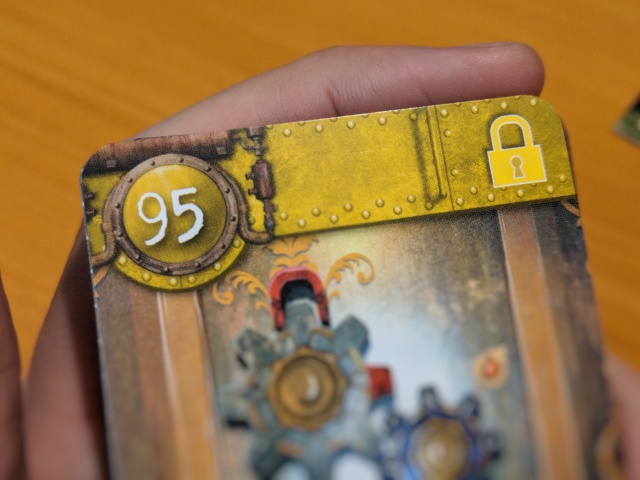 Green cards are “machines”; punch the card number into the app and it pops up a machine you can interact with (e.g. connect the wires in this diagram in the right way to launch the rocket). 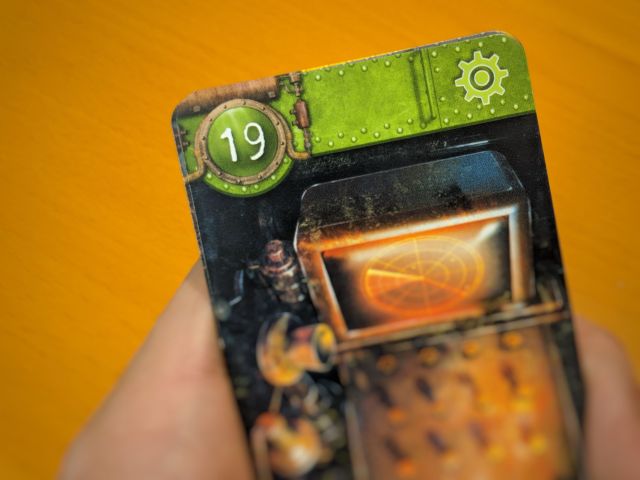 Some cards do not have colors.  Who knows what they do.  Many are dioramas of the room you’re in.  It will show you in clear graphic design certain cards you can take from the deck that represent items and objects you see.  As in a physical room, other items will require you to look quite closely to find them.7

As each card has a number on it, you can request multiple levels of hints for each card through the app.

In some manner, I’m a Space Cowboys apologist. As with T.I.M.E Stories, Unlock! is not without its translation issues.  These can be jarring, or game breaking, and other choices can be quite polarizing8, yet I generally fall on the side of “but it’s worth it”.

When it comes to Unlock!, I love that it keeps the escape room feel of how do I use these physical objects (like the hammer and the ceramic fortune cookie) to get out.  The decks generally have a narrative arc that I enjoy and find lacking in Exit.

That said, the new set is a mixed bag for me. I liked House on the Hill – but if you are less inclined towards room that give you piles of codes and locks, you may not enjoy yourself. There was one specific puzzle in Nautilus that left me cold; in communication with Space Cowboys there was a typo in the app’s hint giving the solution, but we had to agree to disagree on the legitimacy of the intended answer as well.

However, I very much enjoyed both Tonipal’s and Ra. The Ra scenario is 24 cards, rather than the usual 60, but do not let that fool you.  Somewhere I read or heard that Ra came about, roughly, because they had puzzles they thought were too difficult to put in a published set, and while I don’t know that we necessarily found it harder than the others9, I found the puzzles quite rewarding.  I think Tonipal’s also does rewarding things with the system, but that I would also expect to be enjoyable if it was your first Unlock! box.

1: https://images-cdn.asmodee.us/filer_public/58/12/581287ca-4a2b-460b-9d77-a32d1fe19d48/us_demo_ra_temple_telechargeable.pdf
2: Also worth pointing out that I had not done any puzzle hunts at this point.
3: Scott has a specific blacklight song and dance he does when a room inevitably reaches that point.  The rooms sometimes put them on YouTube.
4: I may be getting some of this wrong, but this is how the points he was making stuck in my head.
5: Some cards have letters on them
6: It probably goes without saying, that sometimes this is a bad idea.  That cookie was filled with acid and now it is eating through your shoes.
7: This can be a point of contention among Unlock! naysayers, and the app has an option to auto-reveal any of these more hidden numbers
8: Such as the ending of Asylum
9: Or that being ‘hard’ is necessarily admirable or desirable
10: I don’t know how I feel at the end either.
11: ibid.