When I was six I wanted to be a paleontologist.  Right now I don’t know what I want to be, but I knew then.  (We all wanted to be paleontologists, yes?) (Well, my sister didn’t; she wanted to be a pizza hut.) I learned about dinosaurs in kindergarten like many of us probably did. I loved my kindergarten teacher because of dinosaurs.  She didn’t make dinosaurs or invent dinosaurs.  She didn’t discover them, but she did teach me about them.  Maybe it was in the curriculum as fiat from elsewhere, but she directly taught me about it.  I mean, dinosaurs!  How amazing were dinosaurs.

She also taught me about narwhals.  Wow, dinosaurs are amazing, but, well: narwhals!

Here’s the thing though.  I was so excited to go home and tell my parents about narwhals – let alone that they are still around.  But when I told them about this magical dolphin with a spiral horn, well, they didn’t believe me.  I was just a kid in kindergarten claiming this crazy thing existed.  They were adults who surely knew better.

A little while later we were in a museum- I think it was in Chicago, my sister thinks it was in West Virginia- and I rounded a corner to see a lifesize reproduction on a narwhal in a display case.  My jaw dropped.  Up until now it was only my kindergarten teacher, my classmates, and me that knew about narwhals. My parents would believe me now.  I ran back and begged them to hurry around the corner.  “Huh.  He was right – it is a real thing.”

I had just needed the data to show them; to convince them. 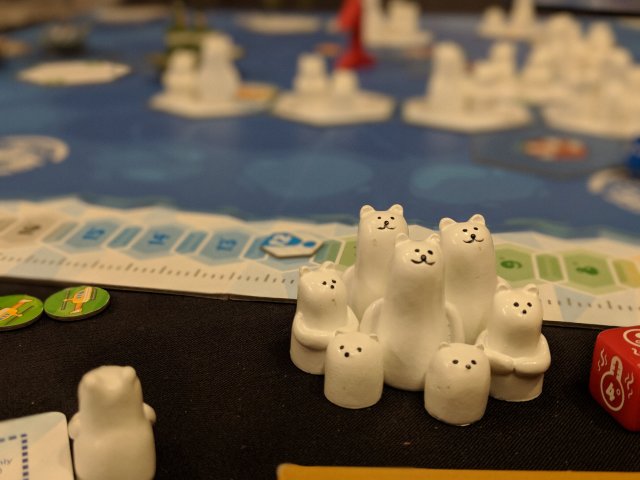 From the rulebook, the theme of the game is as follows:

The consumption of fossil fuel and releasing of greenhouse gases yield global warming.  Around the north pole, the last icebergs are melting and the polar bears are facing the risk of being extinct.  The players form a scientific organization.  They try to collect data about climate change to persuade the governments to change their energy policy. 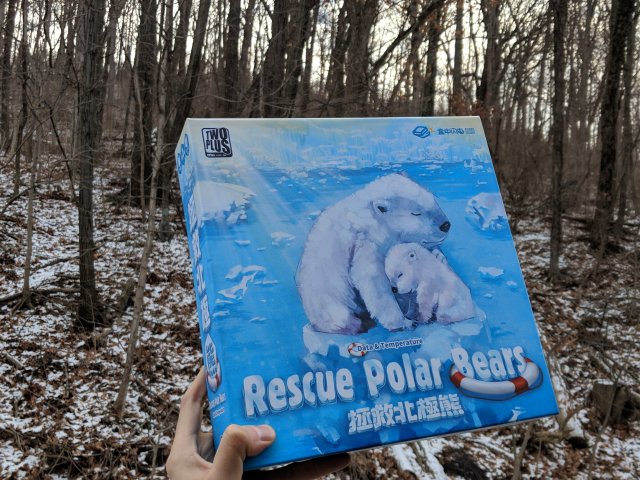 Rescue Polar Bears: Data & Temperature is one of those co-op games – hope-crushingly difficult and tries to distract you from the win-condition with an encroaching lose-condition.

In RPB:D&T, your goal is to collect 20 pieces of data.  You set up a random ice flow from a mix of ice tiles, open water, and bonus-card buoys. Depending on the color of the ice flow, the tile starts with a specific population of bears. The tiles are numbered 1-20, which also corresponds to the temperature above which it will melt  (if it’s the current Tile of Doom). Lastly, you’ll start with 6 helicopters for emergency bear rescue. 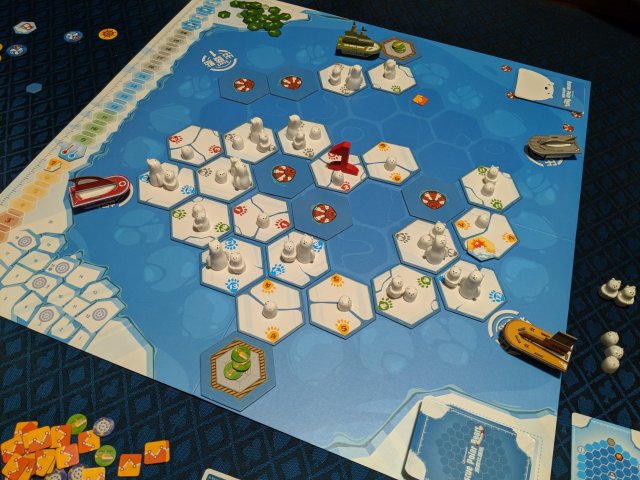 Each player takes a boat and its corresponding card – which depicts an overview of the turn structure, available actions, possible upgrades, and bear storage.

Play proceeds in clockwise order, with each player taking three actions on their turn. You can move (up to the speed of your ship); load a bear from an ice flow or unload bears at a rescue station; and break an ice tile. If you end your move on a data token or a Bonus Buoy, you can take it for free. 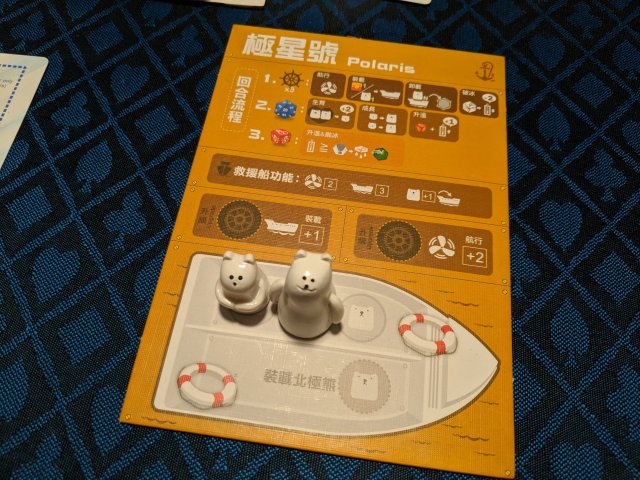 If you collect a data chit, flip a card from the corresponding deck, and a new piece of data becomes available. (There’s no free data, so draw again if it populates onto your boat, and if it lands on an ice flow, you can spend an action to take a data chit from an adjacent hex.)

For every three chits your team collects, you unlock a special ability.  Some boat cards have permanent abilities that you can unlock (e.g. an extra action point each turn; extra bear storage; etc.) and some have one-time bonuses (e.g. deploy additional helicopters; re-use Bonus Buoy cards). 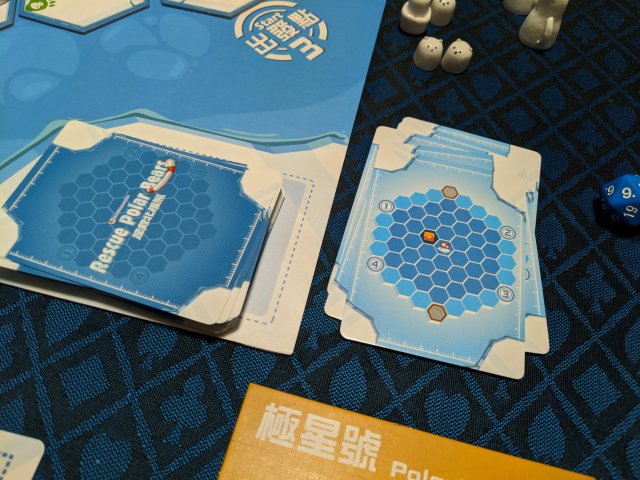 The Bonus Buoy cards are quite powerful effects.  You’ll play them immediately upon receiving them, but you are basically limited to 5 of these cards, at random, throughout a game.

After each player takes their three actions, you roll a blue 20-sided die and consult the bear reproduction chart: on the corresponding tile, happy polar couples may have babies, the young cubs may grow up, or if you aren’t able to do either fully – you’ll add a +1 modifier to the next step. 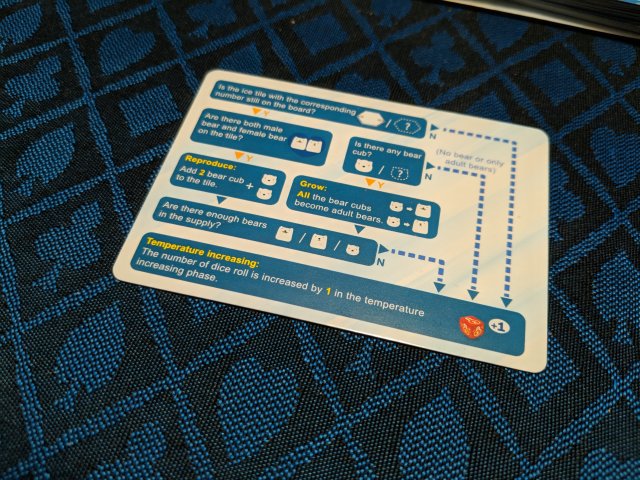 After that, the temperature raises.  The temperature track will always have two markers – one showing which tile is Doomed and will be melting soon, and the other showing the current temperature.  Roll the red 6-sided die (plus any modifier), to see what the temperature increase is this turn.  If the temperature ends up higher than the Doomed Tile’s number, that tile melts. 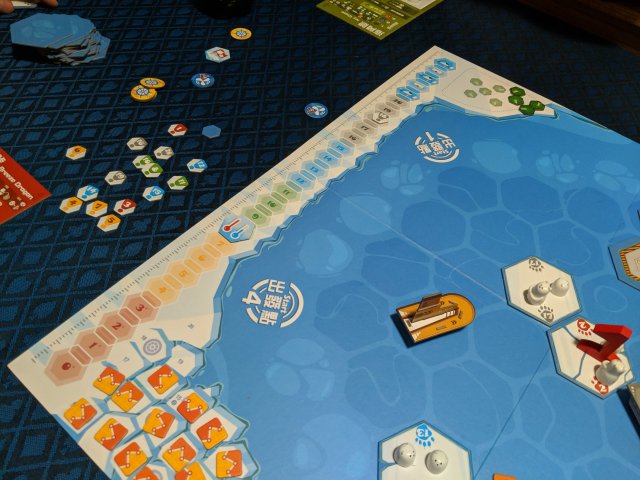 When a tile melts – the temperature drops by 5 degrees, and all bears must flee to an adjacent tile, but each tile only has room to support three bears. If there’s no room at the inn – a rescue helicopter must be used to save the bear. If you have an especially fertile mother bear who bears more offspring than the tile can support, those cubs will also flee to an adjacent tile, but may require rotory assistance.

Your team will lose if bears start to drown, as you’ve exhausted your chopper budget, or the temperature at the end of a player’s turn is above a certain value. 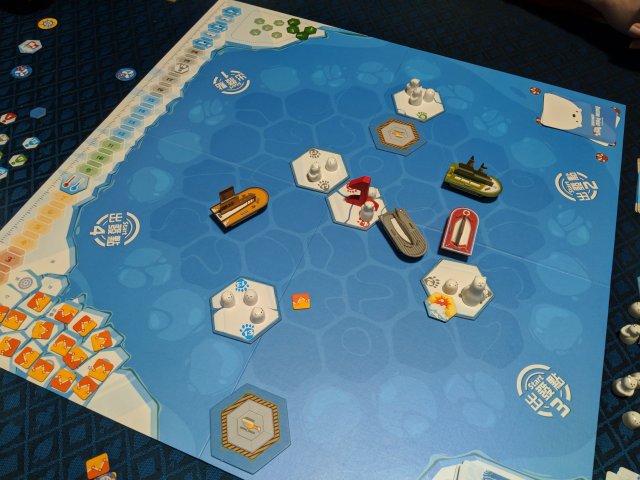 Too focused on collecting data, and you’ll lose from drowning polar bears.

Too slow in collecting data, and you’ll lose from heat death.

We’ve had trouble winning with three players, losing both games, and have barely eked out a victory in our two four player games. There isn’t much scaling in the game- what do you gain with an extra player – a little more bear capacity in your boats? More reproduction and heat between your turns? From our fairly limited experience, having the 4th boat on the board to pick up nearby data makes the difference between three-player failures and four-player victories.

The tension between collecting data and bear rescue is tough.  Unlocking those abilities (and getting closer to victory) is great, but those bears fill up the tiles quickly.

I’ve really enjoyed this game, and it has two of the co-op game staples that I enjoy: you want to play again immediately in order to win, and even if a victory seems within your grasp, you have to play to the end as you just don’t know what could happen.

My therapist talks about having conversations and making decisions not by trying to persuade someone, but by laying all your cards on the table; presenting the facts – and the best decision will present itself.

Thematically, that’s where this game lives – collect the data; present it.  That’s not where it shines though – mechanically, it’s a little random for my taste (e.g. initial setup, bear reproduction, Tile of Doom), but when you’ve got a few of these bears, out on an island, and you’ve used up your helicopter budget, and you know they are about to drown as the ice melts… this game tugs at your heartstrings to save these bears in a way that plastic cubes or wooden minis never could— 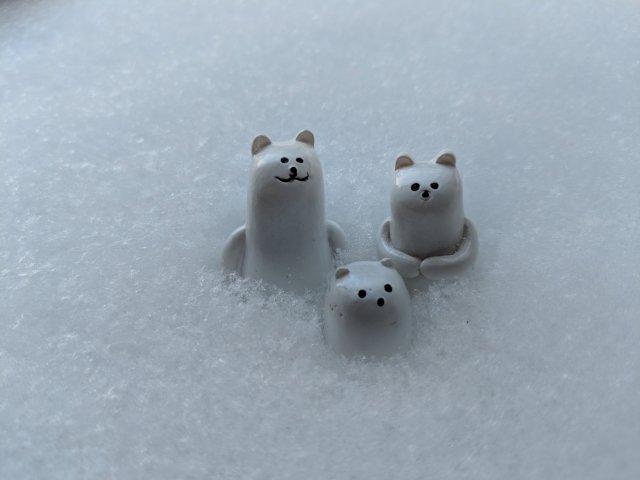 I love it!
I like it. James Nathan
Neutral.
Not for me…