TIMES PLAYED: 4, with a copy I purchased

Gimmicks in games can be a mixed bag; a fancy timer or cool apparatus can add to the game, but they can also be disguising a game flaw – putting lipstick on a pig is the phrase that comes to mind. The wheel in Noria is not what drew me to it – and in fact it made me a little wary – but I was intrigued by the idea of manipulating actions. Besides, what’s one more game when your luggage is rapidly approaching its weight limit? (In this case a few pounds, since it has so many bits.)

In Noria, players are explorers, discovering new flying islands. Players are also scientists, developing technologies, and merchants, buying ships to sell the things they develop. They are also lobbyists, trying to influence politicians to support their developments.

There is a central board shared by all players as well as a stack of flying islands. There are knowledge tokens, resources, goods, ships and warehouses as well as wooden cubes. 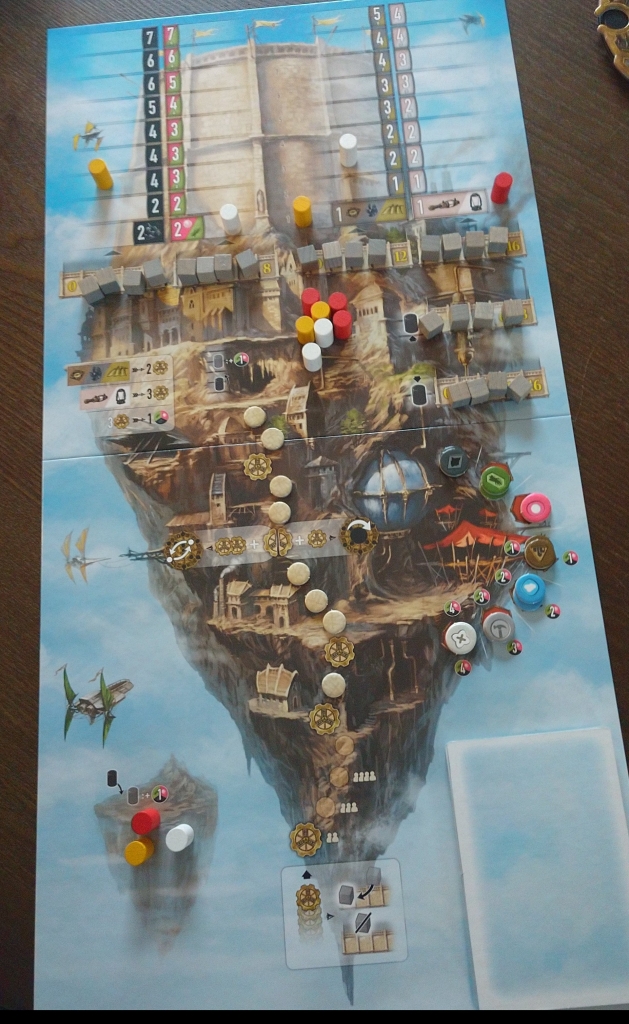 Each player has a board of their own that includes a three-part wheel, a factory and a player aid as well as five representative pieces in their color. Players also start with a ship of each color and a resource of their choice as well as a resource token and choose one politics track to start on. Players also start with City, Journey, Tool, Obsidian, Mycelium and Energy discs; the rules provide a suggested setup for the wheel for the first game.

The wheel and player aid 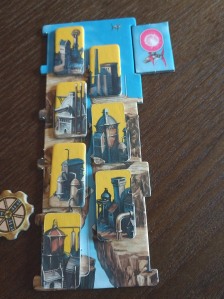 What you can do on your turn is dictated by the discs that are available to you in the active section of your wheel, which is marked by the player aid.

The first phase of your turn is the influence phase and it is optional. If you wish you can spend one knowledge token to rotate either your medium or your large wheel by one space, thus making different discs available that turn. You could also spend two knowledge tokens to switch the position of two discs. You can do each of these multiple times if you’d like, but the cost doubles each time.

Next up is the action phase. You can activate up to 3 discs in the active portion of your wheel. You can only activate one disc per wheel, and the discs must be adjacent, meaning you can draw one straight line between the center of each of the discs that you plan to use; that line cannot cross any line between other discs or empty spaces.

The available discs are in the half of the wheel touching the player aid.

Each disc is associated with one or two actions; you choose which of those actions you would like to take.

Action discs in the market

Resource discs (obsidian, energy, mycelium) let you take a resource tile of that color for every ship you have that matches the color. So, if your pink disc is available and you have three pink ships, you can take 3 energy.

City discs allow you to: 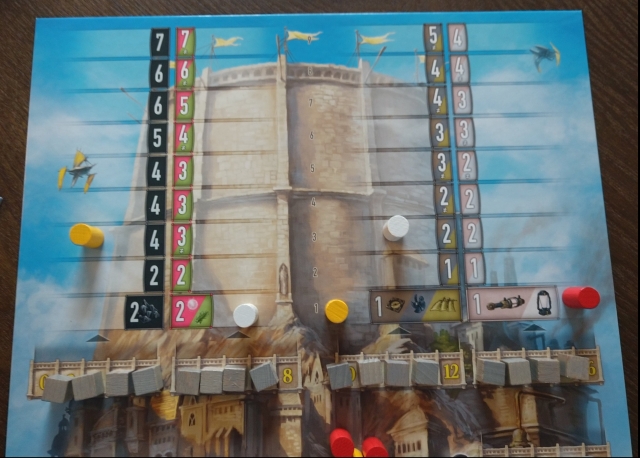 Journey discs allow you to travel to the floating islands. You can choose to either move to an already-revealed island or, if there are islands still not revealed, reveal a new one. When an island is revealed you place a number and type of ships as indicated on the island.

You place your ambassador on 1 island and either:

Tool discs let you either: 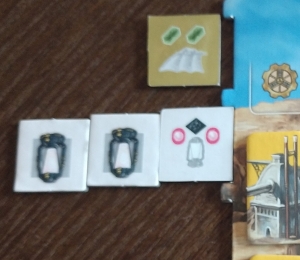 Bonus discs lets you choose one other disc that you will activate this turn; when you activate it you can use its ability one additional time,

In addition to using the discs you have the option to:

After the Action Phase comes the Politics Phase, which is optional.  If you choose to do it, you pay a number of knowledge chips equal to the number indicated on the round track and move one politician from the top section of a politics track to the empty, leftmost seat in the bottom and then take another politician from the top section of your choice and remove it from the game. You can do this more than once per turn, but the cost doubles each additional time you do it. You want the politicians to support your discoveries, so you will want to increase the politician that supports the goods you make and remove cubes from politicians that support others. 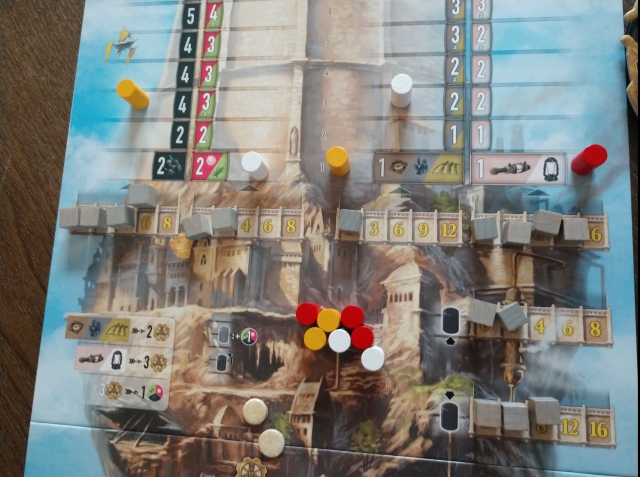 The final phase is the Administration phase.  Rotate all 3 of your rings one space each, using your player aid as a guide. If you have placed any factories take knowledge chips as indicated. If you acquired any new discs place them on your wheel now.

So why do you care about any of this? It’s all about scoring victory points. The game ends after 14-16 rounds, depending on the number of players.  Players score for each politics path by multiplying the level of their representative by the victory point value of that chamber. If a player is not on a particular track they would score zero for that track. For example, yellow would score 21 points in the picture below – level 3 x 6 points on the far left, level 1 x 3 points in the middle and zero for the pieces not on a track. 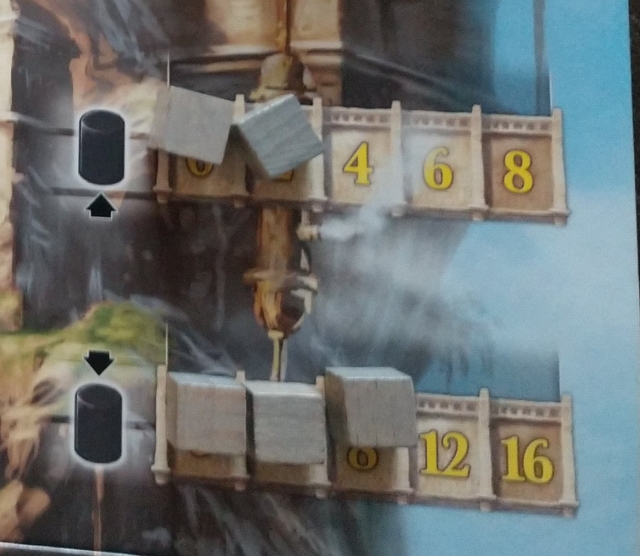 Add these three scores together and the player with the highest points wins.

The game also contains some expert rules.  You choose where your initial discs go in your wheel (as opposed to following the recommended setup in the rules). The Islands are positioned face-up in a circle to start the game and you can only travel to adjacent Islands. The Price of the discs on the market is determined random and you do not start the game with any resources, knowledge or step on a path.

Let’s start with the major negative. The rules are needlessly complicated and a bit scattered. While they are clear enough, the layout is odd, there is unnecessary flavor text adding to the confusion and it can be hard to find what you want when you are looking to clarify something. It was a struggle to learn the game from the rules and a few of the people I have taught the game to told me they gave up on trying to learn from the rules and were glad they could find someone to teach. The game is not nearly as complicated as you might think while struggling through the rules.

However, once you make it through the rules there is an interesting game here. The decisions to be made in order to maximize your score are tough and interesting and while you can undo some of them, the cost to do so is high.

The wheel is a cool way to order your actions; sure, it’s fiddly, but the player aid provides helpful guidelines to rotate it and it works.  It provides a good visual for planning ahead as to what you’ll have available in future turns or when placing your new discs and I enjoy the puzzle of trying to maximize the placement and the upgrades.

The theme of the game doesn’t quite fit with the mechanics.  You are building a goods machine in order to influence politicians to support your scientific developments, but it doesn’t feel like you are doing anything but manufacturing, and it doesn’t quite tie to the politics chart for me.

While I think the theme could have been adjusted or changed to make a better fit, it doesn’t really affect my enjoyment of the game, though; the mechanics work just fine and I can build an engine, regardless of why I am doing so.

There is limited player interaction; you are working alone to build your engine and only interact with other players when you are influencing the politics track, possibly negatively for them. I don’t consider this a problem at all, but mention it for those who like more interaction.

The components are well-made and everything is very pretty. At Essen the game came with another set of discs, which are thicker than the ones in the box; I assume this was done to make them easier to place in an out of the wheel.

Simon Neale: This was one of my instant buys at Essen Spiel last year as I was intrigued by the wheel mechanism and enjoy both engine building games and “cube pushers”. However the lack of clarity in the rules, as Tery mentioned, is a real problem and it took me ages just trying to understand how to set up the wheels at the start of the game. After playing once though, the game is straightforward. The manipulation of the scoring tracks via Politics really only takes place in the early stages of the game and sets a all too fixed agenda of how to score victory points. This is the crux of the game and if you have started in the lower scoring columns you have an uphill battle on your hands. Maybe an expansion will provide alternative routes to victory such as Contracts to be fulfilled, but as it’s stands my group tired of the game quickly which is a shame as the wheel mechanic is interesting and different.

In answer to Tery’s point about a second set of disks at Essen Spiel, it was because the original ones were on thinner card and slipped beneath the rings when they were rotated.

Alan How: This game was squarely in my interest zone and so it was bought at Essen Spiel like Simon. I have had extreme reactions- “barely a game” to “very exciting “ and I think this is down to two aspects of the game. The wheel which tipped over repeatedly causing the first reaction to the political scoring which was more confusing than clear. I agree with Tery that there is a disjoint between theme and mechanics. The overall game works, but in a game about building up stocks of various goods, which tends to suit Euro gamers, the negative feel of reducing someone’s points potential knowing that they’ll do the same to you is too close to tit for tat. And this kind of game reaction can easily annoy you when the rest of the game is of interest. So my hopes for the game rest of finding those players who like Euros and some take that, which is a smaller set of people than the game seems to indicate.

Dan Blum (1 play): I liked the wheel mechanism well enough, but that’s really the only interesting aspect of the game. Everything else is very standard, which wouldn’t be so bad except that there’s so much of it – the game outstays its welcome for me by quite a bit because you spend such a small percentage of the time dealing with the wheel. To me this seems like a fairly typical first design which hasn’t been developed properly – the designer probably had this one good idea and wrapped standard Euro elements around it. A good developer could have either made these other elements more interesting or pared away enough of them to make the game palatable. (For an example of the latter approach see Otys, which also has one nifty mechanism married to standard stuff, but keeps the standard stuff short and simple enough that the game is still decent.)

Joe Huber (1 play): As with Dan, I found the wheel mechanism interesting – but looking for a better game to fit in with.  This moved instantly on to my “wait a few years, pick up an inexpensive copy, and play around with other ideas using the wheel mechanism” list.  Which isn’t bad – it’s a big step up from “ignore completely” – but not enough to encourage me to play a second time.