Catan Universe is the digital, multi-platform version of the beloved classic Settlers of Catan.  In this version, “you have reached the coast of an uncharted island! However, other explorers have also landed on Catan: The race to settle the island has begun! Build roads and cities, trade skillfully, and become ruler over Catan! Set out on a journey into the Catan universe, and compete in exciting duels against players from all over the world. The board game classic and the Catan card game, with totally new graphics, bring an authentic gaming table feel to your screen.”

As you would expect, there are plenty of options of things which you can buy via in-app purchases… you can activate the complete Catan base game as well as the add-ons “Cities & Knights” and “Seafarers”.  You can also play the two player Rivals for Catan game.

Many of you may have played the original phone version of Catan. The good news is that your purchased scenarios in that app will translate to the new app.   The existing Catan apps (Catan and Catan HD) for iOS and Android were renamed Catan Classic, to clearly distinguish them from the new Catan Universe.  For the time being, support for the classic apps will continue after the launch of Catan Universe. However, there will be no more content updates.

In the new Catan Universe, buyers of the Catan Classic apps for Android and iOS will have an easy start with no additional costs, because there they can unlock, for free, the “Basic game,” “Seafarers,” and “Cities and Knights” content they already purchased as part of Catan Classic.

I have only played the game on my Android phone thus far, and only in solo mode, but so far it’s been enjoyable.  The AI is decent, and I have had fairly challenging games so far.  I’m not sure how it decides to make trades or not, but it seems to make decent choices in this regard.

As you continue play, you will accumulate scrolls and gold which will help you get advantages in the game or allow you to buy differen game modes. 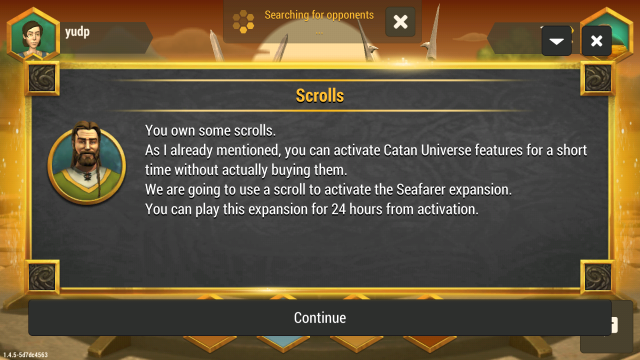 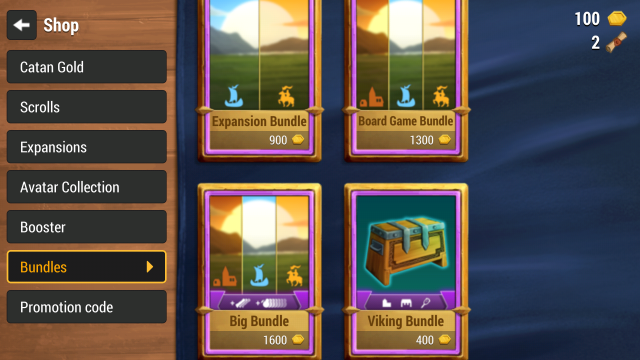 For me, this has been a great way to play some games while waiting for the boys at soccer practice.   There are still plenty of features which I have yet to explore such as an online chat system as well as an ELO ranking system. 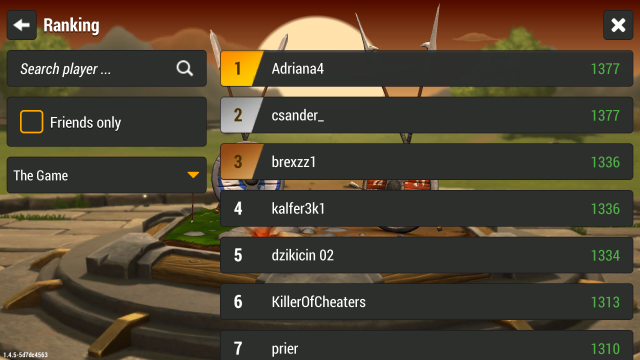 Catan Universe is a good implementation with intuitive controls and an easy interface to work with.  My only complaint of the game is that it’s not build well for multitasking.  If you have to flip away from the game (i.e. to answer your phone or send a text message), when you come back to Catan Universe, you must sit through the loading screen each time.  The game saves your progress, so it’s not like you lose the game you’re playing, but it’s a short but annoying delay with each time that you flip back to it. 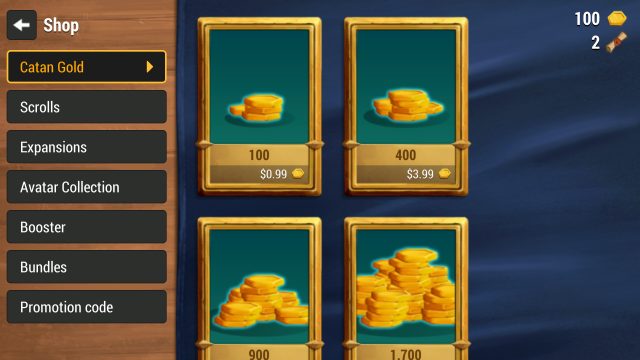 I’d highly recommend this for an electronic implementation of a board game.  You can play a fair amount for free, and the costs are quite reasonable to add on the features that you’d like to play.