Jonathan Franklin: Review of Explorers of the North Sea:  Rocks of Ruin 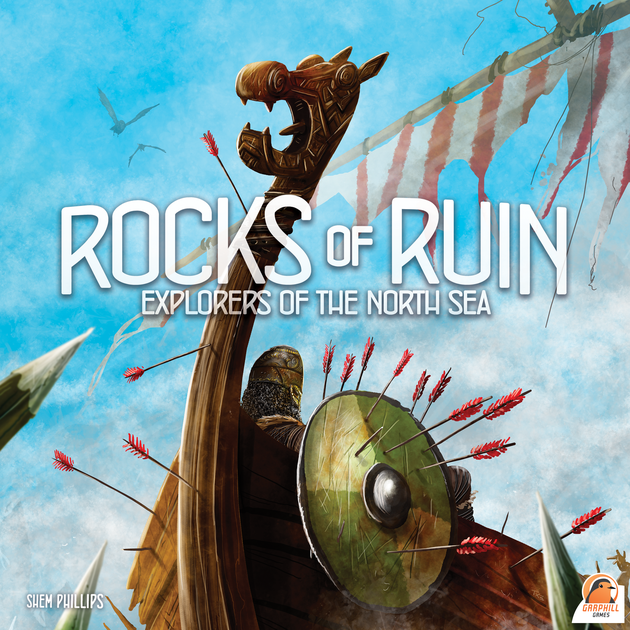 Explorers of the North Sea: Rocks of Ruin (expansion)

Art by The Mico (Mihajlo Dimitrievski)

Expansion from Renegade Game Studios, Base Game from my collection

All images courtesy of Renegade Game Studios
So, the North Sea was not exciting enough before?  Well, it sure is now.

Explorers of the North Sea is a tile placement pick-up and deliver game that fits into 40-60 minutes.  As such I would call it superfiller. It feels less deep than Raiders, which is fine because it fills a different niche.

If you already know Explorers, skip to the heading Rocks of Ruin.

In short, Explorers is very clean design.  After 48 tiles have been placed, you score based on islands controlled, livestock returned to your home, outposts constructed, enemy ships sunk, settlements raided, etc.  One nice touch is that because they are vikings, if they die when attacking an enemy ship, you have fewer vikings for the rest of the game, but those who died go to Valhalla and earn you end game points.

Each turn is place a hex tile to expand the map, place relevant tokens on the newly placed hex (animals, settlement tokens, and enemy ships), take up to four actions, then draw a new tile.

You can spend your four actions each turn to

The game zips along, as each turn takes maybe a minute and there are a fixed number of tiles.  Note of thanks to all game designers who permit you to draw your tile at the end of the turn, rather than at the beginning – saves a ton of downtime.

Rocks of Ruin (RoR) supersizes Explorers.  If you want to play Explorers with five players, run to get this expansion.  One benefit of a tile based game timer is that the game runs just as long no matter how many players.  Each player just gets fewer turns. 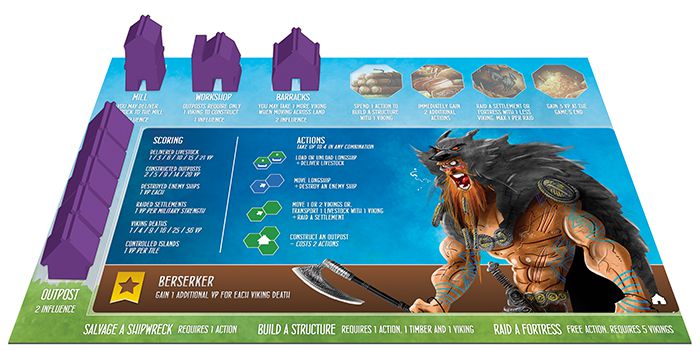 In the expansion, RoR, you get beautiful player mats that match the base game, new buildings beyond outposts that give you special abilities, a few more variable power starting captains, and more hexes.

There are two new types of hexes, and these are the heart of the new systems.  Fortresses are super-settlements.  Surrounded on all sides by land, they require 5 vikings to successfully attack and you may lose 0, 1, or 2 vikings to Valhalla while scoring 4-6 points. There are three fortress tiles, but five fortress tokens, so you never know exactly what you will find there.

The other new tile type is Shipwrecks.  They offer supplies that did not exist in the base game. Timber (10x) is used for building the new buildings, Gold (4x) is 3vps at end game, provisions (4x) get you two immediate extra actions, and battering rams (6x) let you attack a settlement or fortress with one fewer viking.

To add fortresses and shipwrecks to the base game, the expansion comes with 24 new tiles, bringing the total to 72 tiles.

The three new actions are fairly self explanatory.

Enough of the bits & rule summary, what did I think?

I love Mico’s art and it shines here, meshing well with the base game as well as bringing the vivid blues and greens of the series alive.  There are six kinds of animals in the game and we had a hard time telling some of the animals apart, esp. brown and black, but that might be my poor lighting.

I liked the greater complexity – I have a weakness for exploration games, but the base game was a bit too streamlined.  There were not many aha moments. With the expansion, the fortresses take more coordination, and synergize well with the new barracks building.

I liked the race aspect where two players might be able to get to some juicy target, but it often felt like tiles were placed where only the player placing could gain the benefit and/or there was hate placement to cut someone off, forcing them to backtrack.  I think this is because the rules are very open about tile placement – only one side of the hex has to match up with an existing tile. In two games, the board looked like a starfish by the end. In the friendlier games, we tried to have tiles touch at least two sides with existing tiles, making a less gamery layout – more like a normal map.

Part of exploration games is luck.  Timber feels important to the expansion and this is implicitly acknowledged by having 10 of the 24 tiles be timber.  At the same time, a player who goes out and while playing the livestock strategy gets two battering rams can feel a bit bummed that they still cannot build their mill.  If this is not acceptable to you, this might not be the game for you.

A few players were irked that some fortress tiles were strictly better than others.  So I raid and get six points plus a viking in Valhalla while you do the very same thing and get five points and a  viking in Valhalla. As with the shipwreck tokens, it is part of the game, so accept it or maybe it is not for you.

The only real negative for me is that it moved the game from ~50 minutes to ~75 minutes. The addition of the 24 tiles is great for variety, but it pushed the game into a zone where there is more competition.  In my fantasy world, the designer would have a variant with 24 known tiles that get removed so that all strategies are viable and the game is still playable in under an hour, but I understand it is far more easily said than done.

I have not played Shipwrights or the North Sea Trilogy, so I cannot speak to how this expansion affects the full megagame experience.

4 Responses to Jonathan Franklin: Review of Explorers of the North Sea:  Rocks of Ruin