Nimble was recently released by Edition Spielwiese (in Germany) and Stronghold Games (in the U.S.), and we’ve been using it to start game nights.  Just about anybody could play this game — it is extraordinarily simple — and it can be played in fewer than five minutes. The game is marketed as a “rapid reaction” game, and though I’m not normally a fan of speed-based games, this one has proven to be fun. 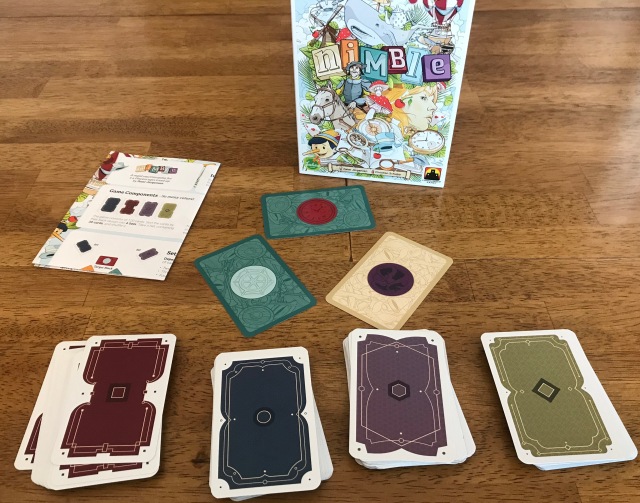 Nimble consists of 120 cards, sorted into four decks of 30 cards each.  On the face of each of these cards, there are two elements: the circle color (in the middle of the card) and the frame color (surrounding the circle color).  There are six total colors in the game, and each of these represents a different classic tale:

The first player to get their deck of cards out of their hand and onto the target stacks wins.  All players play at the same time, and one player is chosen to give a signal to begin.

At that point, players begin flipping cards out of their deck (which they typically hold in one hand) onto the table, starting their discard pile.  Once a card hits the table/discard pile, a player may then move it onto the target stack, but only if the frame color of the card they play matches the circle color on one of the target cards.

You can flip a new card onto the discard pile at any point.  Alternatively, you can play cards from the top of the discard pile as long as the colors match like normal.  When a player can no longer draw a card, he or she takes her discard pile, turns it over (without shuffling), and begins again.

Play continues until one player wins by getting rid of all of their cards.  In the unusual event that no player can play a card, the player with the fewest cards wins.

When I wrote my one-sentence reviews of Gen Con games a few weeks ago, I said that Nimble “cool dexterity game that actually isn’t a dexterity game in any way but rather a real time how-quickly-can-my-brain-process-colors-and-throw-down-cards game.”  We’ve had laugh-out-loud fun playing Nimble, and both game groups I’ve played it with have immediately wanted to play again.

It takes a game or two, but each player seems to work out a different psychological way of dealing with the game’s rules.  Some — which includes me — weirdly start verbalizing what they’re doing. Others rapidly flip through their deck to find the frame color they want.  Some seem to take short rests in the game to recenter and refocus. Others still lie in wait, hoping that another player plays down a card that lines up with what they want to play.  (That last tactic doesn’t seem to work all that well to me.)

Nimble gets surprisingly tense, with lots of moments where one player is sliding a card in just in the nick of time.

My biggest complaint is the color choices.  Though I didn’t have issues, some players felt that the green and light blue were a bit too close to each other.  Other than that, the cards were beautiful, and the game was well produced.

This isn’t the sort of game I’d normally enjoy — I don’t do well with “real time” games — but I’ve enjoyed Nimble, and so has my group.  It is a cool 5-minute filler that would work even with younger kids, and I don’t have any game in my collection quite like it. It is especially fun to see how much better you can get with repeated plays.

Jeff Allers: Disclaimer: I am friends with both the original publisher and designer, and Edition Spielwiese is the publisher that has grown out of the board game cafe where I started a weekly game design meetup 12 years ago.

Even so, I join Chris in not usually enjoying speed games unless I’m playing with my wife, who is very good at them. But I enjoy this one, especially when I put my thumb over the circle on the card in my hand to help my mind block out that color. In fact, I much prefer it to the 3-D cup stacking game which I also recently tried (same concept, with cups that each have 2 colors).

Edition Spielwiese continues their high standards for graphic design with beautiful illustrations that are also unusual for a game this simple. And it is admirable that this publisher has retained the concept of its game cafe in supporting local talent, giving yet another Berlin designer their first published game.  It won’t be Peter’s last.