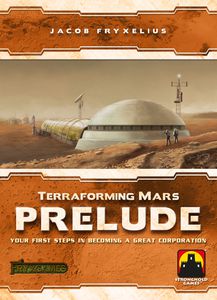 Terraforming Mars is one of the hobby’s biggest successes of the past couple of years.  We loved it when we reviewed it back in 2016.  Since then, the game has gone on to win numerous awards, including first prize in Deutscher Spiele Preis voting.  The game currently sits at #4 in the BoardGameGeek ratings.

The third expansion for the game, Prelude, was one of the most anticipated releases of Gen Con 2018, and it seemed to be selling exceptionally well there.  I’ve already played the expansion several times, and I love it. If you like Terraforming Mars, I suspect you’ll enjoy Prelude, which adds a couple of cool elements and speeds up the start of the game.

If you haven’t played Terraforming Mars, check out my review from 2016.

Prelude is a card-based expansion, and the game comes with 48 cards: 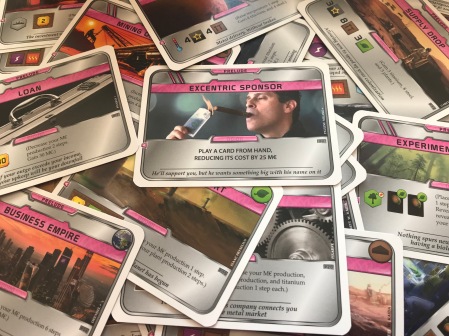 The 35 Prelude cards are the biggest addition.  At the start of the game, when players choose their corporations, they are also dealt four Prelude cards.  They can keep two of these. These cards jumpstart the terraforming, and the majority (but not all) of them give the players starting production and a couple of small bonuses.

By way of example, here are a few Prelude cards that give a feeling for what is in the deck:

Many of these also have a tag, and that tag counts towards in-game bonuses, including awards and milestones.

If you play solo, you have two fewer generations to terraform the planet.  There’s also a new solo mode, where you try to reach TR 63 in 14 generations.  If you’re attempting this new mode, there’s a new standard project: you can pay 16 megacredits to increase your TR 1 step. 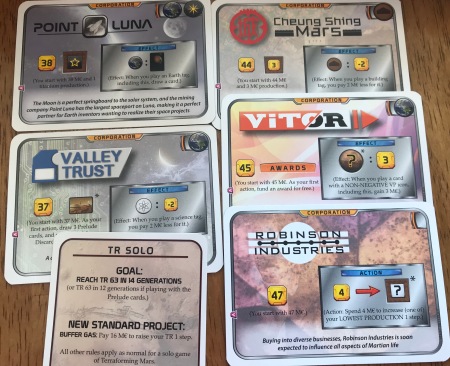 The game comes with 5 new corporations, which are: 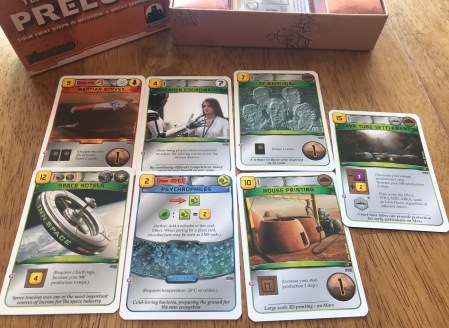 As mentioned above, there are also 7 new Project cards, plus a summary card for the new solo mode.

My thoughts on the expansion…

Of the three expansions available for Terraforming Mars, Prelude is easily my favorite, and I enthusiastically recommend it.  This expansion adds exciting new elements to gameplay, but it doesn’t complicate the game. In particular, the Prelude cards are an outstanding addition, and I will likely use then in most of my future games.

The Prelude cards shorten gameplay, often by 1 or 2 generations.  With my group, this seems to cut 15-20 minutes off the game. The start of Terraforming Mars has always been the slowest part, and this expansion speeds thing up nicely.

The Prelude cards seem well balanced, and there is a nice variety of them among the 35 cards.  Keeping two from a lot of four allows you to customize your Prelude cards to your corporation and project cards, adding interesting strategy towards the start of the game.  I suspect that isn’t ideal for new players: it is never a good idea to make the most important decision be the first one of the game. But for those of us familiar with Terraforming Mars, recognizing the significance of the Prelude cards will come naturally, and they’ll take less than a minute to teach.

So far, my favorite Prelude cards have been Excentric Sponsor (play a card from hand, reducing its cost by 25 megacredits), Loan (decrease your megacredit production two steps, but gain 30 megacredits), and Ecology Experts (play a card from hand, ignoring global requirements).  But with 35 of them in the deck, there are still several that I haven’t had the opportunity to play with. And that’s one of the best features of this expansion: it is highly replayable.

I’ve tried the new solo mode, and it was a fun challenge.  I don’t normally focus on my TR rating: in multiplayer games, I get a lot of points from the map, awards, and milestones, and in solo games, the TR rating doesn’t normally matter that much.  So being required to maximize TR was a fun way to play.

As I frequently say, most expansions tend to fall flat with me: I often find they add clunkiness or break an otherwise fine game.  But all three Terraforming Mars expansions have been streamlined and well-thought out additions that enhanced the best parts of the base game.

Prelude is my favorite of the three, and I highly recommend it to fans of Terraforming Mars.

Craig M: I’ll second Chris’ thoughts on Prelude being the best expansion yet. My early experience confirms that the prelude cards indeed trim off one to two generations. More companies are always welcome too. I cannot think of a reason to leave them out going forward.