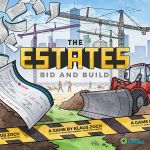 Spiel ’18 (a.k.a. Essen) starts on Thursday, so our coverage here on The Opinionated Gamers begins in the next few days.  Several of us will be at the fair, and I’ll be in town from Tuesday to Monday.

I’ll be doing coverage from the fair like I normally do, though I’m cutting back this year, instead opting for more frequent Twitter updates (@OpinionatedGmrs) throughout the day.

But due to the magic of importing games and/or games coming out slightly before the fair, I’ve already started playing several Essen ’18 titles.  Below I put quick thoughts on 5 games.  These are just my personal initial thoughts, and some of the ratings below are after just one play, so keep that in mind.  Also, to cover all of these titles, I’m skipping any rule review and going straight to my opinion.

Carpe Diem is a tile placement game from Stefan Feld.  Like many of Feld’s most notable games, it has a decidedly point salad feel, with most in-game activities scoring points.  The question becomes which ones score you the most points.

On your turn, you move your character to take a tile, then place it on your board, earning resources and/or points for completing structures.  Feld is perhaps best known for Castles of Burgundy.  Our group played it and Carpe Diem on back-to-back nights, and though I know I still prefer Castles of Burgundy, my group thought it was a closer question, noting that this doesn’t have the luck aspect since Carpe Diem lacks dice.

I have some concerns about balance issues — the fountain tiles in particular seem like a “must have” item — but overall I thought Carpe Diem was a worthy addition to the alea series.

There’s a cryptid somewhere on the board, and you have to deduce its location faster than your fellow players.  Each of you has a piece of the puzzle — one person might know the type of terrain it is near, for instance — and based on questions you ask other players and the questions they ask you, you try to find the creature.

I’m an avid fan and collector of deduction games.  And I was really looking forward to Cryptid.  But to me this game categorically does not work.  It is entirely too mentally taxing without deduction sheets — you have to hold a lot of information in your mind at once — yet entirely too easy with deduction sheets, as it becomes an exercise in crossing things off.  Plus, several of my plays haven’t made it past the second or third turn: this is a very fragile game, and if you’re not watching what information you give other players, it can be over really, really fast.

This is one of my biggest disappointments of the year, not because I didn’t like it, but because I had such high hopes that it didn’t live up to. 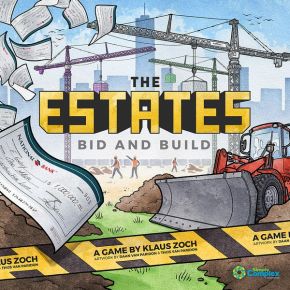 I’m in love with The Estates.  I had never played Neue Heimat, the 2007 title on which The Estates is based, and I had long lamented that, so I eagerly backed this game when it was on Kickstarter.  It arrived this week.

I like auction games, and The Estates has an interesting once-around auction mechanic where the player starting the auction either (a) receives the money from the highest bidder or, (b) pays that amount to the bidder.  The goal is to control buildings of the colors you own when the game ends, and basically everything hits the board because it was auctioned off at some point.  Buildings in complete rows are worth points, but buildings in incomplete points subtract from your score.

As a fair warning, though the rules are simple, this is a devilishly mean game.  My game group is very mild mannered, but this cause animosity at the table in both games we played last night.

But this is highly interactive, with an extremely cool auction mechanic, and several viable strategies.  The Estates is one of my favorites of 2018 so far. 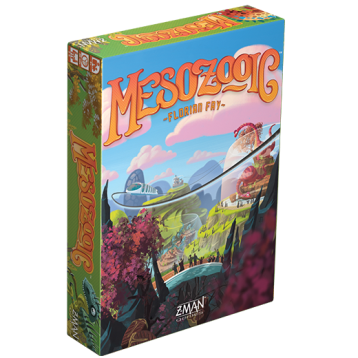 I had written about Mesozooic in my September recap, but my love of this game continues to grow.  It is a new game from Z-Man about building a dinosaur park.  Gameplay lasts three rounds, and at the start of the round, players each draft 11 cards to go into their park.  Then they randomly put these out in a 4×3 grid, but one card will be missing. Cards score based on what is next to them, so players have a short time (about 45 seconds) to rearrange their cards in a “missing piece” puzzle format.  If you’ve never played a missing piece puzzle, you have to slide things around into the missing space to rearrange: you can’t just lift things up and put them where you want them.

I’ve now played this six times with two different groups, and we’ve really enjoyed it.  It is really simple — it’d be a great way to teach card drafting — and the puzzle part is always fun. 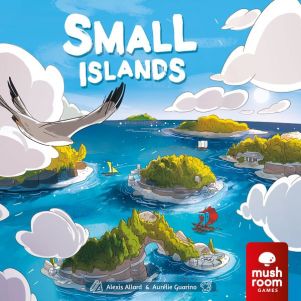 Small Islands is another tile placement game that is, at first glance, reminiscent of Carcassonne.  Players place tiles — Carcassonne style — into a central display.  But from there, differences emerge, particularly with regard to scoring: each player has a different scoring objective (and you get a few different ones over the course of the game) and tries to place tiles to maximize his or her scores from his or her objective.  At the end of the game, their score is how many ports are next to their ship — every player has a ship tile that can be placed on the board to trigger scoring — plus their in-game points from objectives.

This didn’t work for me.  I love tile placement games, but the scoring in this seemed frustratingly random and chaotic, and I saw little elegance in this design.  The components were beautiful, and I suspect many fans of tile placement will like this, but the entire idea here seems underdeveloped to me.  If you’re going to give people varying score objectives, it needs to last more than a few rounds where you’re building a large central display.  Otherwise, they’re at the mercy of whatever is fortuitously sitting on the board when they start that objective, even if they do pick from a couple of different ones.