Thought I’d mention some games that I enjoyed that were off my radar. There are so many games released these days it’s easy to miss some good ones.

Paris La Cite de La Lumiere – At first glance it looks like just another polyomino game but this one provides a bit more challenge. It’s 2 player only and comes in a lovely small box that just fits all the components. The graphics are representative of the Belle Époque. 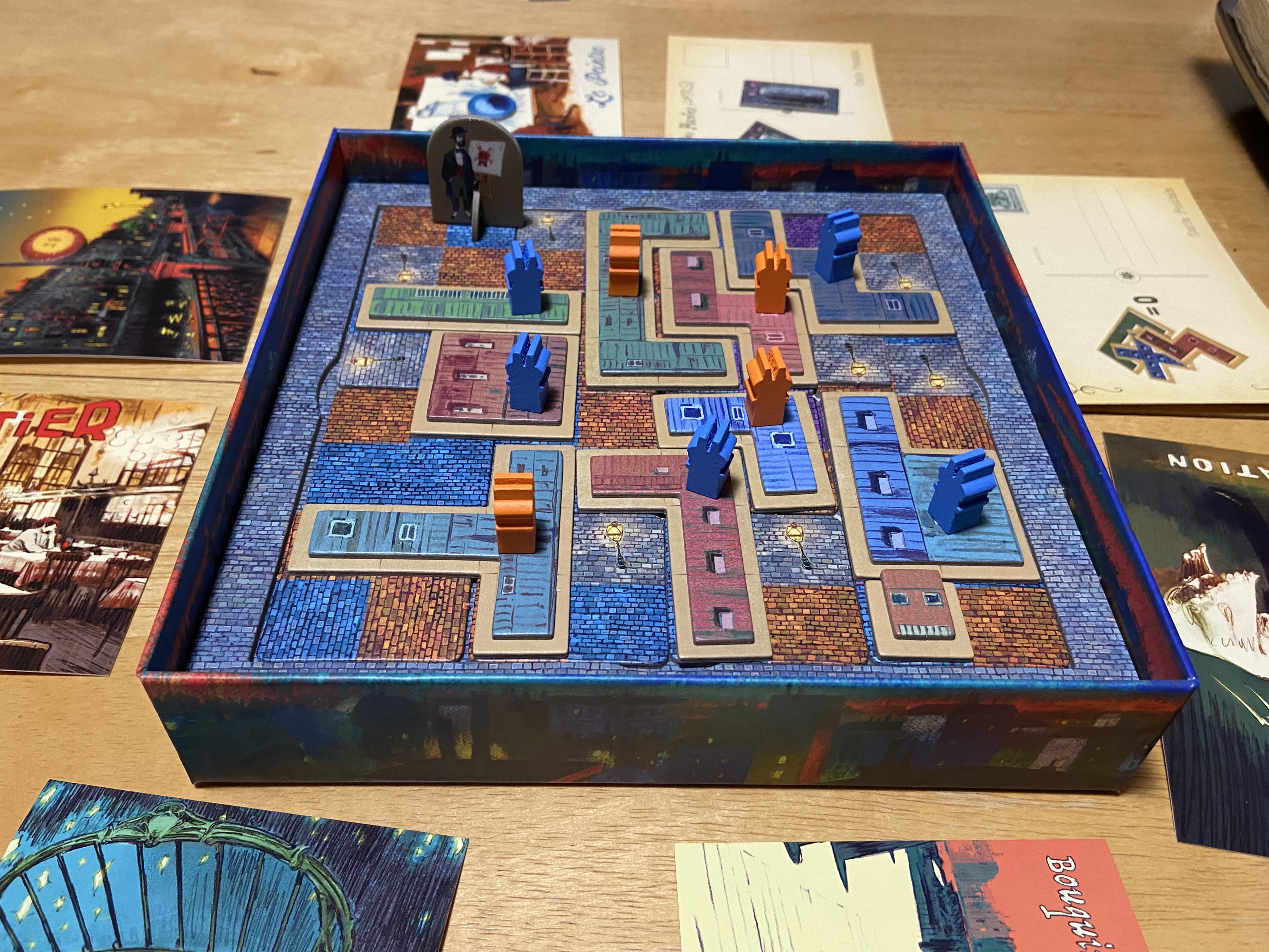 In the first phase each player places cobblestone tiles with spaces of their color, opponent’s color and a shared color/neutral as well as spaces with street lights in anticipation of placing building tiles in the second phase. They may also draft building tiles in this phase.

In the second phase players may either place buildings they’ve drafted onto spaces of their color or neutral colors. They may instead take a special action postcard. Buildings score for # of spaces in a building x # of streetlights adjacent and for the player with the largest area of adjacent buildings.

The game provides some nice challenges as you have to play and plan for 2 layers of tiles somewhat simultaneously while holding off your opponent from positioning for the neutral  spaces and street lamps. The other nice decision point comes with deciding when to draft buildings or take special actions and out guessing which ones your opponent wants or needs. One of the better small box 2 player games to come out, highly recommended if you like puzzle type games.

Players send their workers out to collect resources to build a portal to safety.  Each player also has a leader with a special ability.

The shrinking board as Atlantis floods provides good tension visually and emotionally as the game progresses. Fun cooperative game it’s plenty to do for each player. I’m looking forward to a more difficult level and trying other leaders.

Refinery – A 3 player economic game from Japan. It has the feel of a much bigger game in a tiny box. This game incorporates Puerto Rico like role  taking with the active player getting an extra benefit and everyone getting to perform a basic action. Players are pumping different kinds of oil and moving it through their refinery where they can then either ship getting points and money or using it for limited buildings which may earn points and extra abilities. 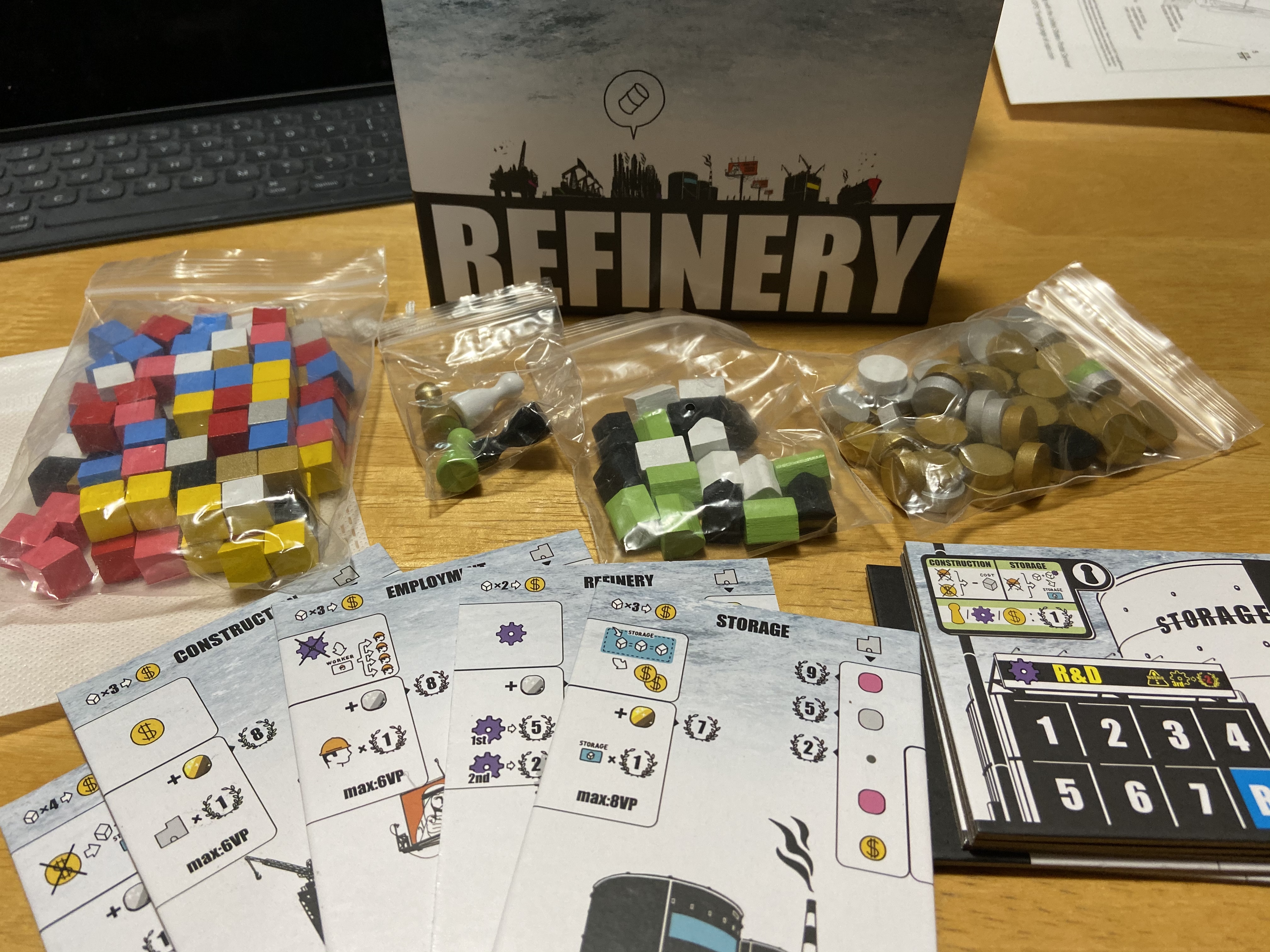 The game has some nice limitations built in like only one type of oil may ship each shipping action and oil refined is based on the type a player has the least of. I’ve only had the chance to play twice since it requires exactly 3 players and I’ve been a bit rough on the rules but it’s definitely worth more exploration.

Mum-Mum Bronze Leaf – This is a beautifully produced game with a wooden board and pieces. It’s a 2 player petal placement game. Simple rules but still enough decisions to make a decent filler. On their turn players may place a petal onto an empty  entry spot on a flower and place any appropriately colored petals adjacent lay scoring points. If Billie Bee is also on the same flower they may use the special action as well. The nicely painted board and colored petals enhance the game play. 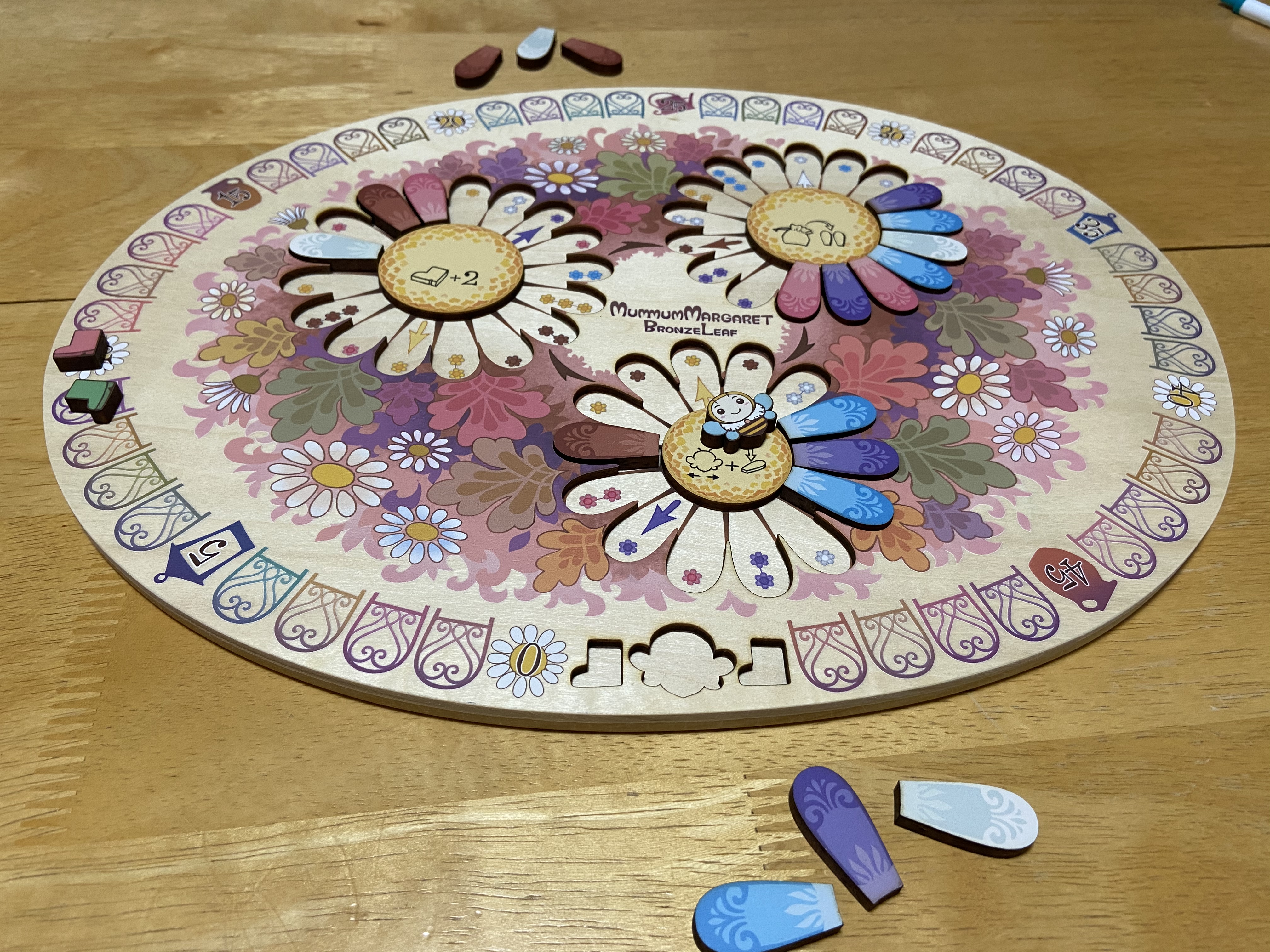 2 Responses to Odds and Ends