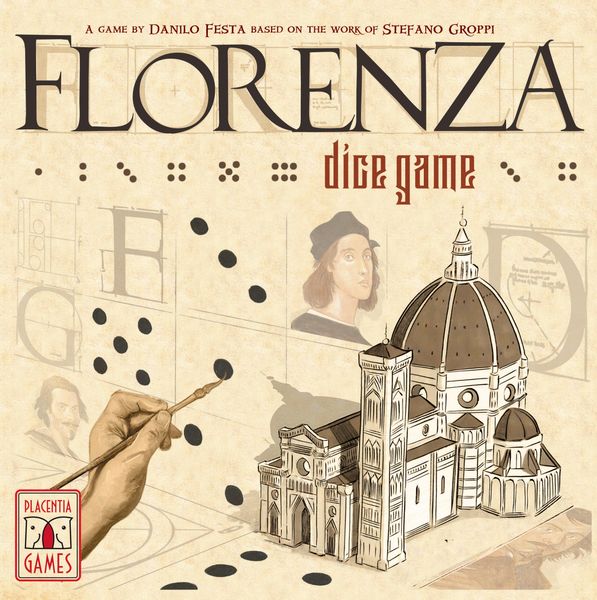 Florenza was one of the big releases from SPIEL 2010 – I remember playing it back then and being slightly overwhelmed by the complexity of the game (no review here as I think my review was lost when Boardgamenews went under).  The game was somewhat streamlined in a card game in 2013 – we previewed it here.  The game has now received a third incarnation, this time as a dice game… (Not many other ways to skin this cat, but maybe there could be a deckbuilder or something in the future!)  This game got a few plays in the fall, and then moved to the back of the line, and it has re-emerged during the Coronavirus pandemic as it was a nice option for 1-2 players… the perfect number given my relative isolation!

In this new release, the game of designing and decorating buildings in Florence is now a “roll and write”.  Each player gets his own player sheet, and there is a central board where players can place dice and see what the different action options are.  The player sheet is split up into a number of different areas, each color coded: Church, Palace, Building district, a supply area and personality tracks.  It is helpful for each player to have a second scoring sheet so they can use the chart on the backside as a reference for the 25 different building types used in this game.  To start the game, each player rolls a d6, and gains the building of matching number (1 to 6) and writes it on their sheet in the first of eight building spaces in the Building district.

The game is played over a number of rounds (4 rounds for 4p, 5 rounds for 3p, 6 rounds for 1-2p), and in each round, there are three phases.  In the Income phase, players get income for completed areas in their Church area.  Next, you look at the personality tracks to see who is the Captain of the People (furthest ahead on that track) and the Bishop (furthest ahead on that track).  The Captain of the People gets a free resource which he must immediately use on his sheet. The Bishop gets a special ability to use in the next phase (more on this later).

The third phase is where each player gets one turn to roll the dice and take actions.  The active player rolls all 6 dice and then places them on the left side of the board in the corresponding row to the color of the die.  Then, the Active player chooses any 3 dice to use, takes the action of those dice (based on the number shown on that die), and then moves the used dice to the right hand side of the board.  All other players can choose any one of the three unused dice for this turn, and they take the action corresponding to the rolled value.  It is possible for multiple non-active players to choose the same die.  If a non-active player is the Bishop, that player can choose any of the six dice; he is not limited to choosing from the unused dice.

Each die has two options.  Four of them are 50/50 propositions with option A going for 1-3, and option B going for 4-6.  The other two are Option A for 1-2, and Option B for 3-6.  In general, you have three choices with each die: gain resources of the color, recruit a personality/artist, gain 200 Fiorini.  Option A is better for personalities and Option B is better for resources.

If you gain resources, you simply cross off matching icons somewhere on your sheet to show that you have used those resources.  In the building area, you are providing building supplies.  When the next empty building spot has enough resources crossed off that match any of the 25 building types, you can build that building.  Write in the name of the building in the space and any VP that come with it.  If you had crossed off extra resources that weren’t needed for that building type, they are lost.  (The pens don’t have erasers, so essentially, once something is marked off, that’s it).  Most buildings come with a special ability that you can use for the rest of the game. I find it helpful to write a little reminder of this ability on the space as well.

In the artwork areas of the Church and the Palace, you cross off resources which the artist needs.  You will need to have crossed off all of the resources as well as having hired an artist to complete a work; this can provide you VPs at the end of the game as well as some extra bonuses such as resources or advancement on the Personality tracks or in the case of the Church, income to be gained at the start of each round.   For the Palace Area, there is also some bonus scoring available for players who are able to complete all four of the paintings here.  For the Church area, you get to move ahead FOUR spaces on any of the three Personality tracks if you complete all 4 paintings in this area.

If you choose personalities, you simply cross off the next space/spaces on the corresponding tracks.  As you move forward on the tracks, you will reach spaces with money, VP, goods or other personality track icons on them.  You immediately take the rewards of any step that you reach.

The phase continues until all players have had a chance to roll the dice.  If you have not reached the end of the prescribed number of rounds, do it again.  Otherwise, you move into scoring.  There are a lot of things to add up now!

The player with the most points wins.  Ties go to the player who finished the higher number of combined artworks and buildings.

Well, this game was sold as a roll-and-write, and I suppose by definition it is – each player gets their own sheet, and uses some results from the dice to determine what they do.  Initially, I guess I was maybe expecting a bit more variation in the rolls, because essentially each color is really just a d2 or d3 – but after a few plays, I have come to realize that there are still plenty of decisions to make, and there is plenty of choice each turn. 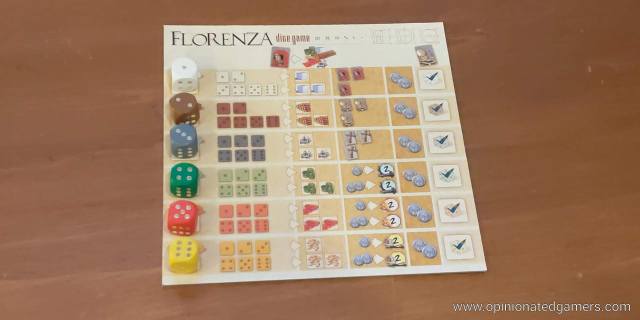 This game really feels like the original board game to me; and as a result, it puts this game at the upper end of complexity for a roll and write.  The box states that there could be a 90 minute game at the upper end of the spectrum, and I can definitely see that as a possibility!  There is a lot going on here, and some decisions will take a while to make.

I think you have to be fairly focused when playing the game; over the course of a 4 player game, you are only going to get to choose 24 dice (3 each on your active turns, and 1 each on your 12 inactive turns).  That doesn’t leave you a lot of time to get the resources, money, artists, etc you need – and your sheet gives you room for 8 artworks, 8 buildings and the three personality tracks!

Simply stated, you can’t get to everything, so you’ll have to figure out how to maximize each of those 24 actions.  The buildings could be helpful early on as the bonus actions on them can really be useful.  The first six buildings (one of which you get free to start the game) allow you to use a particular color die as any value – this proves to be quite useful in giving you flexibility on your choices.  The next six buildings let you exchange one resource for anything when you gain resources of that color. This is also quite helpful.  However, these buildings don’t score you many points, so there is that tradeoff.  The Church artworks score well, and they do provide some helpful income at the start of each round.  However, there are only four rounds in a four player game, so if you want to get a great benefit from this, you had better finish these early!

After my games so far, I really haven’t figured out a dominant strategy – and I like that about the game.  I think the best path for me is just figuring out how to get the most from each die for what my current strategy wants.   I do like being the Bishop as getting the ability to choose any die for the entire round is quite nice; but if you don’t get that bonus, you’ve likely wasted a lot of actions getting to that point.  This is the one part of the game that I’m not sure about, because this harsh penalty for not winning tends to prevent people from trying to overtake the current Bishop.  This might be group think in my group, but it has held true so far; and any player that managed to be Bishop for the majority of a game has tended to win.  That being said, we also had one game where no one was ever the Bishop as there were ties for it after each round.

For me, Florenza the Dice Game is perhaps a bit more complex than what I’m looking for in a roll-and-write, but on the other hand, there is a complete and complex game here in a super small package – and that is a trait I like to see in games.  I no longer own Florenza, but if I did, I think this would replace it because I get much of the same experience in a smaller and slightly quicker package.

My thoughts on the solo game

I have also played the games a few times solo, and I did want to comment on the interesting mechanism used here.  The solo game is set up the same as a 2 player game, but there is a ghost player that is used to select dice on the non-active turn.  The dice are rolled for the ghost player, and then using the white die, the pips from the white die are counted off to determine the first die “chosen” by the ghost player.  Then the pips from that chosen die are then used to count off for the second die, and the process is done again for the third die. 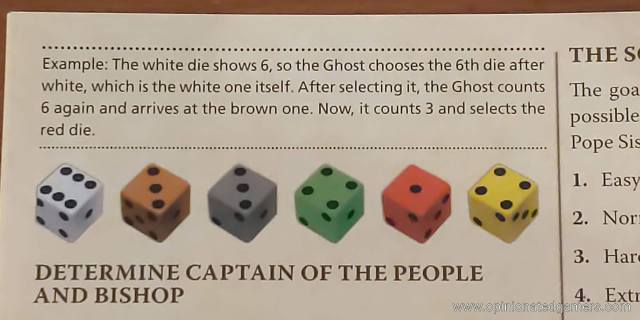 I thought this was a very clever way to automate the die selection process.  The game also includes a rule for the automatic advancement along the Captain of the People and Bishop track to ensure that there is a constant battle for these as well.  Your goal in the solo game is simply to score as many points as possible, and while the highest level goal is 70+ points, the most I have been able to score so far is 51; so I have found this to be an interesting challenge.  A solo game only takes about 20-30 minutes for me, and it has been an enjoyable diversion thus far.  I actually like the solo game a bit better than the multiplayer game due to the quicker play time.

Dale Yu is the Editor of the Opinionated Gamers. He can occasionally be found working as a volunteer administrator for BoardGameGeek, and he previously wrote for BoardGame News.
View all posts by Dale Yu →
This entry was posted in Essen 2019, Reviews. Bookmark the permalink.

3 Responses to Dale Yu: Review of Florenza the Dice Game