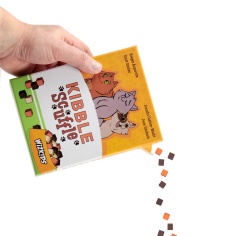 In the past few decades we’ve seen the power of cats. Take a popular item and stick a cat on it, and its popularity grows. Examples include Garfield (whose creator took a look and decided a cat-comic would sell well) and an extremely popular cat-based card game. (A cat game who must not be named – I fail to see the attraction of its randomness.) Today I want to take a look at a few cat-themed games that I’ve encountered in the past year or so. Cat Lady has players drafting cards off of a 3×3 grid to score points at the end of the game. Kibble Scuffle has players playing cats around feeding bowls in order to trigger a feeding phase. The Lady and the Tiger is a slight outlier, as only half of its richly illustrated cards show a tiger. It is also more than one game in a box as it contains five different games that can be played using the cards and glass tokens in the box. The three games span a wide variety of play styles, so read on to see if one (or more) fit for your gaming needs.

First, we’ll take a look at Cat Lady. Here, players score points by collecting cats but only if they also collect enough food to feed them at the end of the game. Along the way, players can score bonus points for collecting cat costumes, cat toys, or catnip. The game starts out with a 3×3 grid of cat cards in the middle of the playing area. Players then take turns choosing a complete row or column of 3 cards which are then refilled for the next player. Cat cards (and food from cat food cards) are placed face-up in front of a player. Special cards like catnip, costumes, and cat toys are held in a player’s hand and score points at the end of the game. Catnip increases the value of all your fed cats, the player with the most costumes earns points, and cat toys are scored in sets of unique items. Most points are scored through fed cats. Cats earn varying amounts of points, and some boost your score in additional ways (such as extra points for cats of a certain color or for costumes.) Cats are picky, so they will want one or more food bits of the three different colors available (Milk, Tuna, and Chicken) but thankfully there are also wild-card food cubes available that can count for any color. If you fail to feed any one of your cats, you will also lose points. In addition to the 3×3 grid, there are always three special stray cat cards set aside at the start of the game. Players can collect one or more of these stray cats which typically create bonus scoring opportunities at the end of the game. 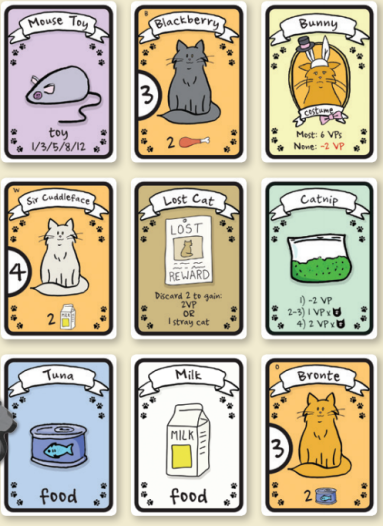 In essence, this is a card-drafting game. However, it proceeds on a particularly brisk pace as players are drafting three cards at a time. There is a nice balance of trying to get good cats, but also having the right number and type of food to feed them. Not enough, and you lose points. Too much, and the player with the most unused food also loses points. The scoring is fairly straightforward, but there are enough options that players can pursue different sorts of strategies: just get and feed cats, collect costumes, claim sets of item cards, or go for a few cats but make them more valuable by using catnip. Of course, there’s always the three stray cats that can change how you score the game. It is a very approachable game and while there are a few different ways to score points, the base values are clear and any special scoring is clearly marked on the cards. I like how there is competition in the game but no direct player antagonism, there’s no way to take away or devalue another player’s set of cats. I suspect the 14+ age limit is a way to avoid toy regulation for small bits, as the game is easily played by preteens. Gamers looking for a fun, quick game with a bit of depth should be able to use the fun cat theme to pull in more casual gamers for a fun family gaming night.

Kibble Scuffle (Previously examined by OpinionatedGamers here) centers around three cat bowls of food. The object of the game is to obtain the most points of food, represented by little wooden kibble cubes. After filling the three bowls in the center with four kibbles each (poured from the cute game box with a side chute like a normal kibble box) the game starts. Players each start with the same deck of 20 cat cards and draw five of them. They then take turns playing a cat card onto one of the three food bowls. When a food bowl has five cats around it, they feed – starting with the player holding the kibble box. A player’s cat claims one of the kibbles and then is placed in its owner’s discard pile. Then the next player’s cat may eat, and so on until all the kibbles are eaten or all the cats have fed. The kibble box is then passed to the left so a new player has first dibs on the next bowl to gain five cats. The strategy arises in the game due to the unique abilities of each cat card. The Fat Cat counts as two cats when counting to five while the Greedy Cat gets to eat two kibbles when it is its turn to feed. Feral Cat discards another cat at the same bowl while Clumsy Cat removes one of the food when it arrives on the scene. When a kitten is played, a player can also play any other kitten cards they have. There are 17 cats in all (+3 extra kittens) for a deck of 20 cards. Once players are familiar with the “base” cards, there are five more advanced cats that can also be added to each player’s deck.

Kibble Scuffle squarely in what I call the “take that” style of game. Players are going to be frequently getting in the way of, and perhaps bumping off entirely, other players’ cats as they all crowd around the food bowls. This style of game seems to be especially popular among the younger pre-teen/teenage set. (Once again, the 14+ I suspect is there just for the toy warnings, this is easily played by a 10 year older or even younger.) There are timing issues as to when to play aggressively and when to hang back to let things develop. Obviously you want to force a bowl (or two if you’re really good) to trigger an eating frenzy when you’re holding the kibble box so that you get first pick of the kibbles available (kibbles come in 3 colors, worth 1,2, and 3 points each.) At the end of the day, though, players need to try to stay under the radar with their cats, and time their strongest plays well. The game suggests a few variations for experienced players. A 2 on 2 game can be played with teammates on opposite sides of the table. In addition to just adding in the 5 advanced cards to make a 25 card deck, players can have the option to customize their deck by using only 20 of the 25 cards available. An option is even suggested to let players cherry-pick their first five cards. All of which give the game a bit more “legs” than it would otherwise have. Kibble Scuffle is a fun cute cat-themed game that is great for gamers who want a fairly light game where players have the opportunity to mess around with their opponents. 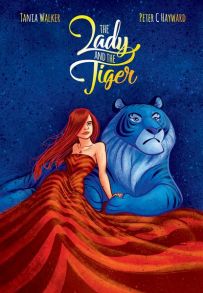 This is actually five games in one. The box comes with a set of 20 very pretty red and blue colored oversized cards. Each card is either blue or red and displays either a lady or a tiger.
Of note, none of the cards sport a number. Four of these cards show a large lady or tiger in red or blue. These are used in many of the games as Identity cards to secretly assign players a color and type. There are also 25 gems of five different colors. These are used to play one of five possible games.

There is something for almost everyone in here. I like how the games have different player counts. My favorite games would be Favor (bidding), Hoard (solo puzzle), and Traps (bluffing.) While Hoard may not always be my go-to solo puzzle game I have enjoyed it on occasion. It’s a nice option if I already have the game on hand. While both Favor and Traps can be played with two players I think they shine brighter with higher player counts. Thus, I feel I’ll get the most use of the various games in groups of 3 or more.

Verdict:
Each “cat” game has something to offer. My favorite is probably Cat Lady as I like games with multiple ways to score points and shy away from the more aggressive titles. However, my boys like the back-and-forth action of Kibble Scuffle (and you just have to love the kibble box…) The Lady and the Tiger is in a separate category. It’s almost a Swiss Army Knife of card games, sourced from a single set of 20 very richly illustrated cards. Chances are, one of the game options would be a fit for any specific group. I have to admit none of them are must-have, but the cat theme is a strong one in my household so I think Cat Lady & Kibble Scuffle will be in the rotation.

Karen M.: I can only speak about Cat Lady. In the time before, when I used to host game nights, this game has been a big hit with casual gamers…it has been one of the most requested games. It’s fun and has enough decisions to make it interesting but not overwhelming. On a side-note, I have also played the iOS app of this game many many times. You can knock out a game in 5-10 minutes and it has cute animations and functions very well. I recommend both.

Ratings from the Opinionated Gamers
I love it!   Karen (Cat Lady)
I like it.    Matt Carlson
Neutral…
Not for me.

Dad, Gamer, Science Teacher, Youth Pastor... oh and I have green hair. To see me "in action" check out Dr. Carlson's Science Theater up on Youtube...
View all posts by Matt J Carlson →
This entry was posted in Reviews. Bookmark the permalink.