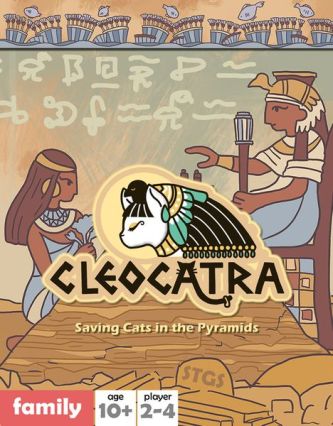 Ta-Te Wu is a designer who must love cats… Two of his previous games are in my gaming basement: Cat Rescue and Cat Sudoku.  This game completes the trilogy of feline fun – where players act as Egyptian cat rescuers (appointed by Cleopatra) trying to save cats in the Pyramids.

Each player takes the three rescuer meeples in his color and places their matching colored score token on the pyramidal scoring track.  The three Royal Inspector tokens are placed near the playing area. The 13 Pyramid tiles are shuffled face down and make into a draw pile.  In the first round, each player draws a tile from the draw stack and then placed that tile on the table, adjacent to at least one other tile if possible, and then places one of their rescuers on that tile.

Play continues clockwise around the table.  On a turn, a player takes two actions – either a tile action THEN a Rescuer action OR two Rescuer actions.  Players must be able to take both actions UNLESS they choose to score with their first action, in which case, their turn ends after scoring. 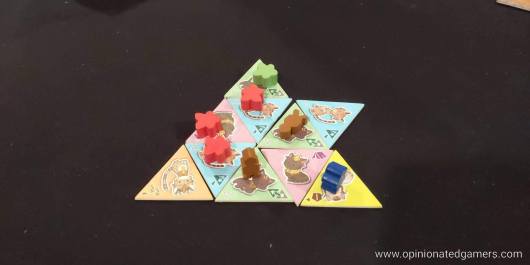 There are two types of Tile actions: 1) Scout – draw a tile from the draw pile and then place it face up adjacent to at least one of the tile; 2) Search – Take an unoccupied tile from the board and move it to a different legal location on the board.  You cannot break up the tiles into more than one group.

There are three types of Rescuer actions: 1) Dispatch – place a Rescuer on a tile that you just placed or moved (to a limit of two rescuers of any color); 2) Team up – place a Rescuer on any tile adjacent to one that you occupy; 3) Rescue – i.e. score points by choosing one of your Rescuers that is NOT on a tile with an inspector, and then score 1 point for each different color seen on the tile the Rescuer was on as well as any directly adjacent tiles.  Furthermore, score an additional point for helpers (any of your Rescuers that are on adjacent tiles which scored).  Finally, remove the scored Rescuer and any helpers and place them in your supply.  Place an Inspector token on the tile that scored – first from the supply, and then if none are available in the supply, taken from another location on the board. 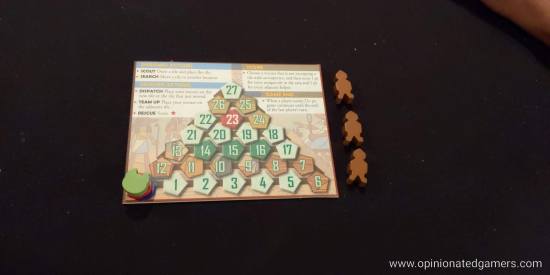 The game continues until one player has scored 23 or more points. The game continues to the end of the current round (so that all players have the same number of turns).  The player with the most points wins.  There is no tiebreaker.

The game also has four small expansions.  There is a starter tile which is placed on the table and acts a blocker of sorts.  You do not score points for the tile nor can you place anything on it.  You can also put the three Caesar tiles in the game, they take the place of the Orange tiles.  They still act as a different color for scoring, but you are rewarded by having multiple of these tiles adjacent to you.  When scoring, score 1/3/6 points for 1/2/3 Caesar tiles in your scoring area.  Finally, the last expansion in the Master Rescuer.  Replace one of your small Rescuers with a large Master Rescuer.  When you score your Master Rescuer, any helpers are worth 2VP instead of 1VP.  Finally, there are 3 Mummy tiles which can be added – and they are placed onto the board and when a rescuer on a mummy tile, you can take the special action depicted on it. 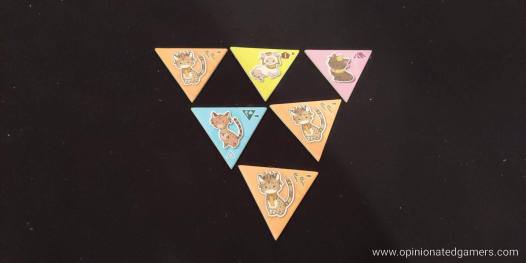 I hadn’t heard of Cleocatra prior to it showing up on my doorstep, but as soon as I saw the designer, I was immediately interested.  While not every game from Ta-Te Wu has been a hit, most of them have been.  I still haven’t figured out the love of the cat theme, but hey – as long as the game is good, who cares?!

Here there is an interesting back and forth of tile and meeple moves.  Ideally, you’re trying to get your pieces in areas where they can score well.  This can be accomplished by either placing your rescuer in a particular spot OR moving the right colored tiles adjacent to your piece.  Most scoring plays will take 1 or two of your turns as it can take awhile to get everything lined up.  You’re often going to move a tile and then score a rescuer – because if you don’t do this, someone else could move the tile away from you in the interim before your next turn.  If you have enough rescuers, you could always move a tile next to you and then place another rescuer on it – as a non-empty tile cannot be moved.  When you do this though, be wary and make sure that an opponent couldn’t swoop in and steal the scoring opportunity away from you!

The inspectors add an interesting race aspect to the game.  If you are cohabitating a space with another player, sometimes it’s worth it to score earlier to take advantage of that location.  Once you score, the inspector is placed on that scoring space, and this means that your opponent cannot score his rescuer until the inspector is moved away.  Sure, this is sometimes only a temporary obstacle – but it is still something that your opponent will have to plan around.

Scoring usually brings in 2 to 5 points per score, and there is often a lot of competition for use of the single lime green triangle – as this is guaranteed to add a point to your score.  I still haven’t figured out whether it’s better to rapidly score smaller sums or spend more time per score but max them out.  So, I just end up doing whatever the board allows me to do at the current moment…

The game itself is quite simple, and the rules can easily be explained in a few minutes.  It has proven to be a nice little opener for game night – while we are awaiting for a straggler, this game can hit the table and we’re generally close to the finish by the time everyone is present.  The basic game is pretty good on its own, and the small expansions give enough variety to keep it interesting.