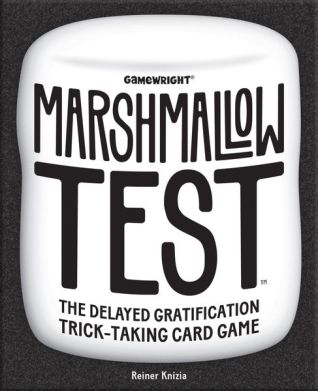 I just received a box of games from Gamewright, and I’ll admit that I am very impressed with their newest selection of games.  In the past, I had always thought of Gamewright as more of a family-oriented company (Slamwich, etc) – but this year’s selection of games looks to be turning a new corner.  Sure, the games are still perfectly suited for families, but two of the three games come from distinguished designers in the genre.  These games are the sort that I’d be happy to pull out when I have non-gamer guests over, but they also have the pedigree behind them to work for the usual gamenight.

Marshmallow Test is a re-vamp of a well received game from Dr Knizia, a designer that most everyone reading this blog should be familiar with.  The original version, Voodoo Prince, was originally released in 2017, and many of the OG writers here took a liking to it.  I missed out on ordering this from Germany, and it never had a US release, and I figured that this was just going to be one of those games that I never added to the collection.

I was more than pleasantly surprised to see that Gamewright had taken the US rights for this and they would be bringing a version of this to stores here.  Interestingly, in a Tweet from the designer himself (https://twitter.com/ReinerKnizia/status/1245631140674732032) – he calls this the “designer’s version”.    This version feels a little more streamlined than the original, which would make sense given Gamewright’s push for family and mass market sales.  Additionally, the change in theme away from voodoo royalty and into soft squishy snacks also probably helps… 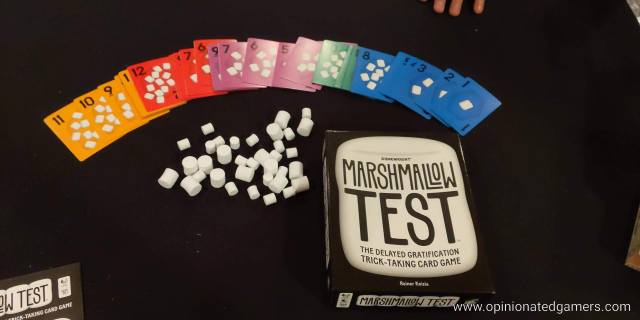 In this game, the deck is comprised of 5 suits, numbered 1-12.  This deck is shuffled and players are dealt a hand of 12 cards.  The dealer then leads to the first trick.  All other players must follow suit if possible, and if they cannot, they can slough whatever they want.   If there is trump in play (which starts with the second hand of the game), you can break trump for the trick if you are void in the lead suit.  Interestingly, once trump has been played, all later players are able to freely play trump, even if they are not void in the led suit.   If a trump card is in the trick, then the highest trump card wins.  IF not, the highest card in the led suit wins.  The winner of the trick collects the cards and sets them aside.

Check to see if this trick causes the winner to “go out” – due to hitting the limit of tricks for the player count.  For instance, in a 3 player game, you “go out” when you win your fourth trick.  When you go out, you score points equal to all the tricks won by the other players at that moment.  Once out, you can discard the rest of your hand as you will not take part in the tricks any further.  However, your collected tricks will still be used to calculate scoring for the other players.  Play continues until all but one player has gone out – at this point the round immediately ends, and that final player scores no points.  The player who scored no points in the hand will be the next dealer (and get to decide trump in the next hand).   In a 5 player game there is an edge case when more than one player is left playing when the final card for the hand is played – if this happens, all players who are not “out” simply score zero for the hand. 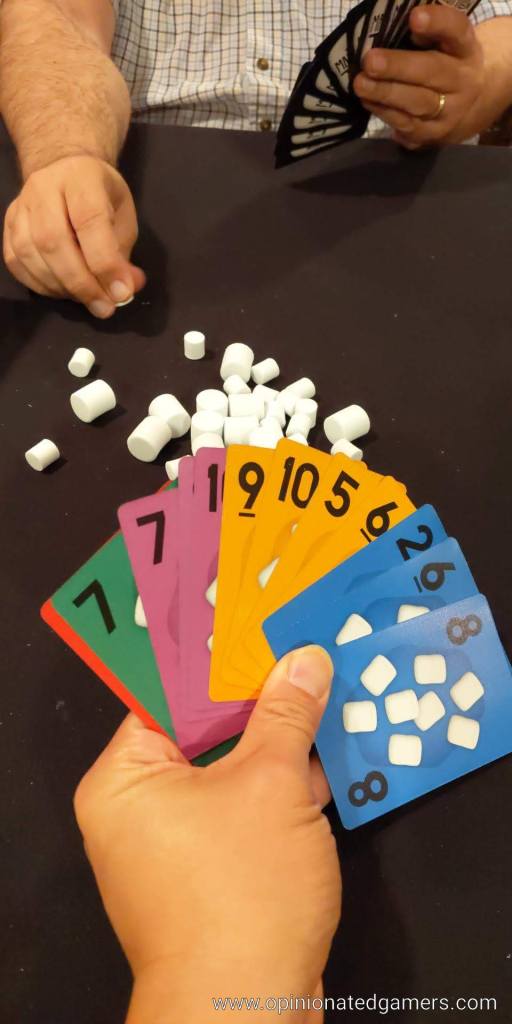 The game immediately ends when one player collects his 20th point.  If this hasn’t happened, another round is played –  The deal rotates clockwise one position and all players receive a new hand of 12 cards.  In the second round and all thereafter, the dealer gets to examine his hand, and he declares a trump suit before play begins.  This suit is trump for the entire hand.  The dealer leads the first trick and play goes on.  Again, the game is won immediately by the player who collects their 20th point.

The subtitle of the game is “The Delayed Gratification Trick-Taking Card game”, and that pretty well sums it up.   Here, you want to win tricks, but ideally you’d like to be the second to last person to go out in order to maximize your score.  Of course, the longer you wait, the higher the chance there is that you’ll get shut out of points – and therein lies the challenge in the game…

I have played the original version of the game, Voodoo Prince, and I remember liking it a great deal.  Marshmallow test feels to be more simple and streamlined version of the game, and it still works for me.   The new theme is a bit weird to me – based on the Stanford Marshmallow experiment – https://en.wikipedia.org/wiki/Stanford_marshmallow_experiment – but I can easily see how a game about marshmallows will sell more in the mass market than a game about Voodoo.  And whether the principle of the experiment is true or not – it does reinforce the idea that you might get more marshmallows if you’re able to wait it out…

The game is made simpler by taking out the special cards found in the original version of the game as well as keeping the deck composition constant regardless of player count.  To play the game, you simply pull the deck out of the box, shuffle, and deal.  In the end, you still have the same basic challenge of trying to be the second-to-last out of a hand to maximize your scoring.   One thing, though, to keep an eye on is the endgame condition.  As the game ends immediately when someone scores 20 points, there will come a time when you actually may not want to be shooting for second-to-last to go out in a hand because you might be able to score enough points to sew up the win by going out earlier.  I find that this adds a certain extra level of tension to the endgame.

I like that rule change, and I have found some interesting subtleties about the trump rule.  I have seen people try to intentionally throw a hand in order to get the chance to choose trump in what they feel will be the final hand of the game.  I’m not savvy enough to worry about things like that, but I’ve seen it done…

The art is cute, and non-voodoo themed – and the suits are easy to pick up as they dominate the whole card.  I’m a big fan of that.  The cards themselves are a little thin and they are a bit more prone to bending that typical cards.  And let me mention the scoring markers.  They are little white squishy things that look and feel like Marshmallows.  I have not yet heard if they taste like Marshmallows though….

Marshmallow Test gives you a nice tight trick taking game where you try to finish second to last in the first few hands, and then as scores creep towards 20, there is this whole second level of maneuvering as you try to figure out how to the first to get to 20 – or if nothing else, try to prevent your opponents from getting there first!  And, it has the cutest scoring markers.

James Nathan – I thought the changes here made it a better game.  I never especially cared for the wrap-around lowest card beats the highest card exception (though I do like it in other games), and the splitting cards were also not my favorites.

But! I thought the trump-declaring choice was an interesting touch here, such as the meta-game of quasi-tanking what you might think is the penultimate round in order to better position yourself for the final round, and is the best choice for trump a suit you are heavy in, or nearly short?  The game’s scoring mechanism makes that an interesting call.

Other things I’m not usually a fan of are large stacks of undealt cards.  However, here it somewhat serves the role of the split cards and the wrap-around, as it adds a tangible paranoia as you play a low rank card and can’t be sure of if you can lose the trick (and later in the round, what can you try to wrap up a win with?) Again, the game’s scoring mechanism makes this usually unwanted factor a feature.

I do appreciate the clear, crisp, and brightly colored cards, though they are a bit too large of print and fanning your cards goes a bit wider than usual. 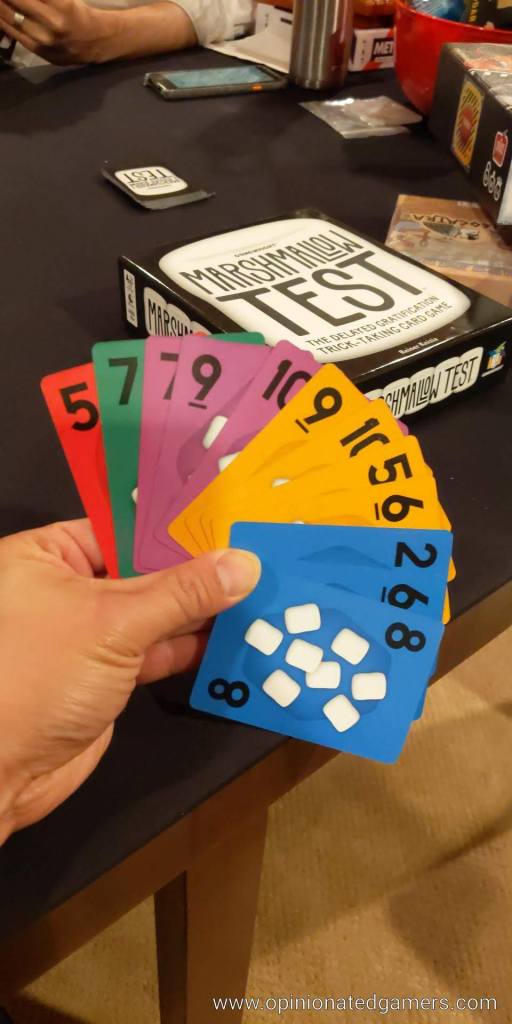