Bar Barians is one of the new fall releases from Giochi Uniti, one of the major players in the Italian boardgaming scene.   They are probably best known for Kingsburg – but many of their games have been hard to find here without a decent distribution plan.  That’s all different in 2020 as Asmodee North America has picked up the distribution rights.  Thus, Bar Barians finds its way to my doorstep and thus onto the gaming table.

In Bar Barians, players are adventurers who are relaxing in a bar between dungeon crawls – and they get caught up in a bar brawl.  Before you know it, it’s every man/woman/elf/mage/troll for itself.  The only way to win the game is to be the last adventurer standing!

Setup is pretty simple.  Choose one side of the bar to play on, either the inside or the outside.  There is a special rule that applies to each side for every 6 that is rolled in the game.  Each player chooses a character, takes their character card and places a hit point marker on 12, and then places the corresponding standee in one of the four areas of the bar.  Players should choose to either use the plain side or the side with a special asymmetric ability. Each player draws a hand of 5 Brawl cards.  The rest of the deck remains nearby. 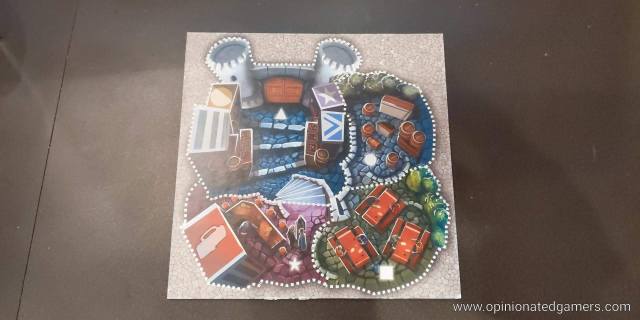 On a turn, a player takes three actions: moving one space orthogonally, playing a card from your hand or drawing a card from the deck.  Any of the choices can be repeated multiple times.  At the end of your turn, you must discard down to 5 cards in your hand.

The game revolves around card effects.  There are five different types of cards (notated by an icon in the upper left)

Play goes clockwise around the table.  If a character is reduced to 0 hit points, that character (and player) is eliminated.  The player who did the final blow gets to draw 2 Brawl cards as a reward.  The game continues until there is only one player left standing, and that player is the winner.

This is an old-fashioned sort of game – just get everyone in the bar and let the fighting begin.   It reminds me of the games I played in high school (you know, back when MTV showed music videos all the time!) There is honestly not a lot of planning that you can do.  You have no control over the cards that you add to your hand, only a random draw from the deck.  Thus, most of the game is tactical and reactionary.  Just draw the right cards at the right time and you’re sure to succeed! 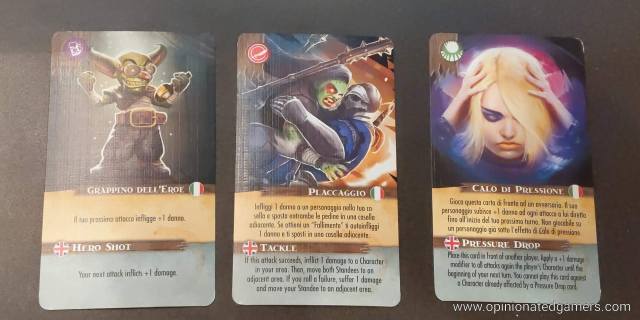 What I like to do keep my hand near the max of 5 – in this way I will have the most flexibility to choose what I want to do next.  Carefully watch the other players, and I try to find someone who has just played a defense card – as it is therefore unlikely that they have another, and then it’s time to pounce!   The KO bonus is also really nice to pick up as it’s essentially nearly a free turn as you get two Brawl cards from the deck.

The game is, as you might expect, unpredictable.  Many of the cards have unexpected or swingy actions.  Furthermore, each time anyone rolls a 6, the game could turn on its head.  In a turn when a 6 is rolled, the die is again rolled at the end of that turn.  If the second roll is a 5 or 6, then a special rule comes into play.  If you’re on the Inside board, all players pass their hands clockwise.  If you’re on the Outside board, all players move to the area of the board where the active player is!

After trying each side, I would recommend playing with the advanced character boards as the extra abilities give you slightly more options.  Again, there’s not really a lot of room for long term strategies, but in a game where anything goes, it’s more fun to add in the extra and different effects.

The components are solid, the cards have a nice linen finish to them.  The rules and cards are bilingual (Italian and English), and the translations seem well done.  To be honest, I have no idea if the English text is a true translation of the Italian – but we had no issues with interpreting what the English words wanted us to do!  I guess, in the end, that’s all that matters….  The artwork is a cartoony, slightly macabre take on RPG tropes.  It really reminds me a lot of the art in Munchkin – heck, the play feels a lot like it too.

As you would expect, this is the kind of game that is honestly probably best played with lots of beer on the table and in the bellies of the players (just as in the game).  If you really care about who wins or loses, this maybe isn’t the best game for you.  If you’re in for a game with lots of laughs, twists from unexpected cards or dice rolls, etc – then this is the game for you!