More thoughts from the Opinionated Gamers from the second day of electronic convention going…  It appears that for now, the bulk of our writers’ time has been spent taking demos of games and/or playing games.  There does not appear to be a lot of video or panel attendance.  My local group is still playing games mostly, though I have my laptop open and I’m still trying to peruse things as they come available.

Day 1 ended on a high, with a great (part) game or Lost Ruins of Arnak. At its heart it is a deck building/deck destruction game with resource collection and some race elements. The art work is beautiful and evocative if somewhat busy. That, plus the theme of exploring this island and finding the lost ruins was what appealed. We all liked the game and most of us bought it, but for me, I worry about the challenges faced at the various site locations being similar from game to game, at which point it becomes more of an optimisation puzzle, with player interaction confined to competing  for card purchases and some spaces on the board. The card purchases could be critical but the board spaces did not appear so.

My group has figured out how to use Tabletopia and the Discord chat via the Spiel website and so we are getting to play the games we want without too much hassle. But we have found some of the functionality of Tabletopia challenging and tiring. For one we could not get the cards in Lost Ruins to stack no matter how hard we tried. It’s interesting comparing sites like BoardgameArena and Yucatá to Tabletopia. While the 3D elements of the latter make it very visually appealing, if they don’t sort out some of the mechanics the former two will always be preferred. Another point is that often the most useful camera views are directly top down, which defeats the purpose of 3D.

Day 2 started with a game I was not remotely interested in,..before today. After a rules explanation we tried a couple of turns of Dwergar. To my surprise I was engaged and intrigued and will buy a copy of it if it ever makes it’s way to South Africa. (shipping is just too costly). It’s worker placement with a relatively novel twist; you place a worker in a spot and take the worker already there to use with your next action. The key is that workers of specific colours give bonuses at specific sites so the colour of the worker one is getting is almost as important as the action space chosen. Chaining the correct coloured  workers is no doubt very powerful. 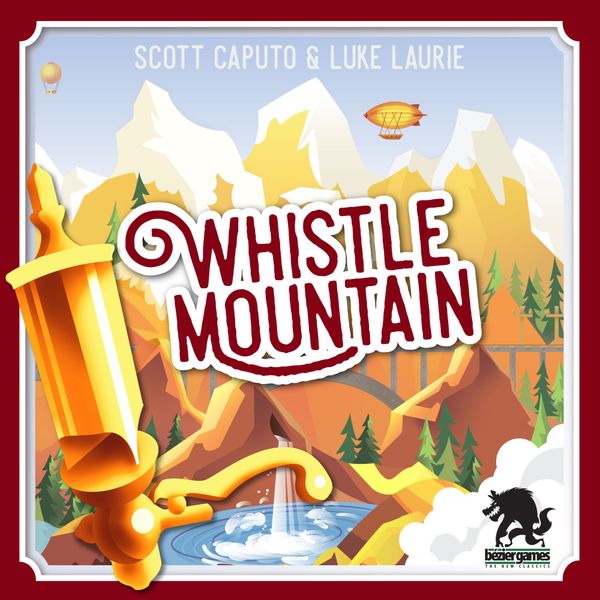 This game was swiftly followed by Whistle Mountain, a game that defies categorization, having so many disparate elements coming together in such a compelling package. One is using dirigibles to collect resources to build scaffolding and machines to collect victory points. Workers are there too, not used for actions but rather to be saved or promoted for victory points; something that happens when machines are built onto the scaffolding on which workers are located. Additionally, in a thematic stretch, tension is created when snow melts and the water at the base of the mountain rises, sending workers to the whirlpool and stopping machines from working.

My powers if description are weak; this is not the mess it sounds like. It’s a heavy game, with turns not thought through resulting in little or nothing to do subsequently. The board and components are a little underwhelming but I see this is a must buy.

So, midway through Day 2, I have watched many videos and quite a few live games. I’ve now played 5 games of the 10 or so I want to try, and I must say I have been pleasantly surprised that not one has been a dud and the quality seems as high as previous years.

Next, Simon W tells us from Holland: 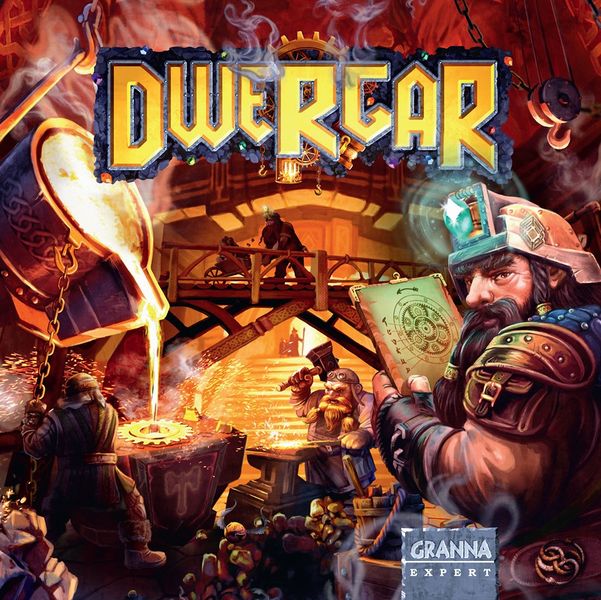 Dwergar: This beautifully illustrated worker placement game was delightful to play. There is an interesting twist to the WP mechanism, in which each player starts with only one meeple and one “Special” meeple. When you play on an action spot, you take the meeple that is there, and the meeples come in three different colours which have different abilities. In your turn you place one meeple three times, but the second and third time you will be using meeples you have swapped from the board –  and so planning in what sequence you play and take meeples is very interesting. The “big” meeple has other special abilities including removing a meeple from the board, so that you may deprive someone of a turn if they go on a spot without a meeple.You try to optimise the sequence of your play so that you put the different coloured meeples to optimum use while still doing what you want to collect the resources that you need. In this game the meeples represent dwarves mining for stone, iron and gold, and as well as using meeples to excavate these materials (they must be dug out and placed in a lift system which allows them to eventually rise to the top, but the lift carries yours and other player’s materials)  meeples allows you for example to perform projects, and light and keep your furnaces burning. Lit furnaces (wonderfully depicted on your player board) are essential to help you get things done, as you can imagine (you are a dwarf after all) and projects are things you aim to build up in the game by purchasing them with the resources you have. Building up more projects than someone else allows you certain special advantages  – for some projects only – and finishing the projects off creates small engines mechanisms which give you benefits during play. There is much more here than in other run-of-the-mill WP games and best of all the artwork is evocative, cheeky (lots of Easter eggs and little jokes) and thematic. I have rarely seen such a nicely designed board. Unusually for me with a WP game –  I love it.

Whistle Mountain – Bearing little relationship to Whistle Stop, this game is a worker placement game in which you must cleverly build structures to span a ravine using airships to collect resources and help you make use of machines. The design is original, with meeples being placed on the board on polyomino (tetris shaped) scaffolding pieces containing resources. To get points you have to place machines on the scaffolding that you or others have built; and activate them with airships while taking care of your meeple workers, which eventually get promoted (when you build machines). A flooding mechanism in the ravine means you must keep your meeples safe or you will lose points at the end of the game;  the flooding mechanism is nicely done with a rising water level as the game proceeds. So here the meeples are not really taking actions but are more a thematic way of earning points, and it is really the airships which are the workers. The cleverness of the game comes from the timing of when to place airships and meeples and when to take the airships back into your hand which allows you to build scaffolding and earn points. There is a lot of extra stuff in the game such as upgrades which help you do things faster and better ; and cards that you draw which also help you along. The game was a bit fiddly to try on Tabletopia and we stopped after only two rounds – I would really like to try it again. I had high expectations of this game having watched a few videos etc, and overall while I think the game is clever, unfortunately the high price tag (especially with shipping to the EU from the USA) means I won’t be buying it. I am convinced however that others will like it, so please try it and I will definitely play someone’s copy next time I see one. – Like it 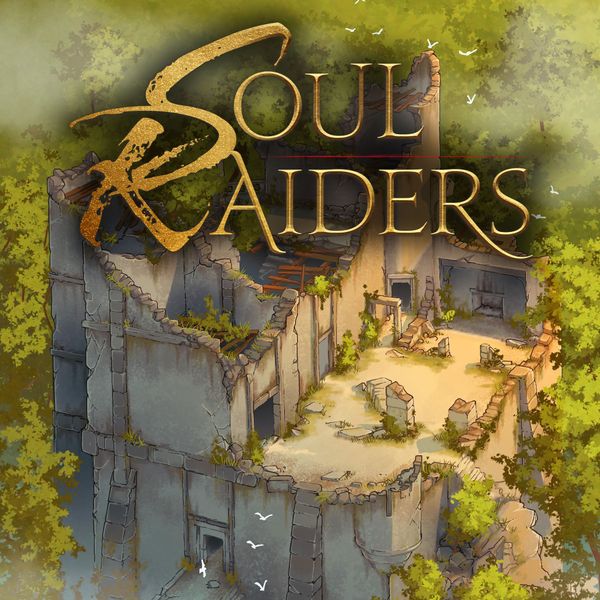 Soul Raiders – This was a demo of a prototype for a game due to kickstart sometime next year. The main attraction for me is that the author is Marc Andre, the guy who designed Splendor and Majesty, both of which get a lot of love in our household! This game however is a cooperative story-telling dungeon-crawler-type game, where you may choose to split the party or not and explore different locations. Each location is represented by a double-sided card, and you will not be surprised to hear that as you explore, you meet monsters and impact your surroundings. The nice thing here is the extensively developed story line – the game will come with 3 chapters and the publisher was keen to underline that you will have a lot of replayability, since each story arc is changed according to the decisions you make (which areas to explore). The way you combat is using cards drawn and each player has his own deck of cards and a further deck of experience cards that he accesses in a fixed order as he levels up. Otherwise, I am not an expert in dungeon crawlers but I liked the gameplay and the artwork and I am convinced Marc will produce an excellent and very rich game. Keep an eye out for this one! – Like it.

Lorna had her own experience with Paleo (from the west coast of the USA):

Paleo-I like the mechanism of how each player has their own card and can make choice to cooperate of have an individual action. The rest of the resource building etc seems pretty standard and I’m not sure I really felt much theme wise. Of course we only played the basic challenge, maybe more challenge is with other modules or maybe it’s all the same cause family edition.  It’s also fairly  repetitive. Takes about 2 seconds to learn but apparently there is a warning not to play your first game with 4 because of too many decisions make the game too long ie, don’t AP over it

That’s it for now,
hopefully one more update later today (night-time USA style)
Until your next appointment,
The Gaming Doctor