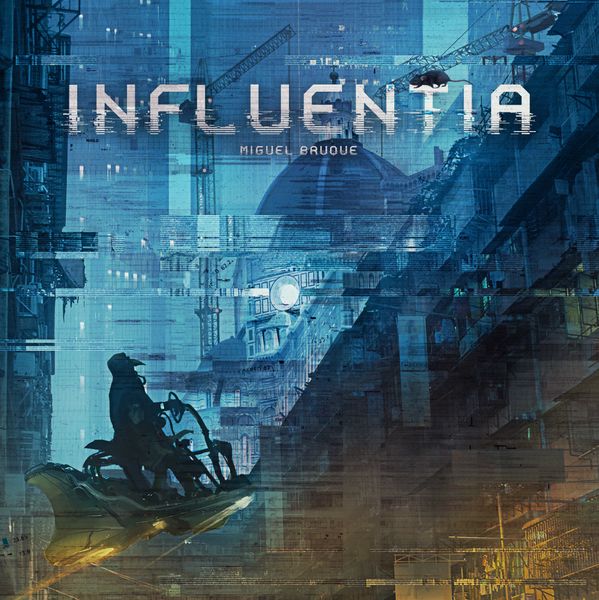 Influentia was a game that I did not know much about at all when I started doing my SPIEL 2020 research.  However, I was drawn to the Ludonova page when talking to an old friend, Peer Sylvester, about his new game Polynesia – which is being done by the same publisher.  The cover art initially caught my eye, and when I saw that this was a trick-taking game with a futuristic setting – I definitely was interested in learning more.  The publisher was kind enough to send a copy of the game to us, and it initially hit the table within 48 hours of arrive here from Spain.

I am not overly familiar with the designer, though BGG has 5 games listed under his credits: Influentia, Idus Martii, New Corp. Order, Arrrh!, Wake Up, Cthulhu!   Upon further review, I had New Corp Order on my 2018 list, but I don’t see that I came home with a copy.  In any event, he definitely has a decent track record, and this particular game appears to have won awards in the past -being names the Winner at City of Granollers Game Design Contest 2016

The game is set in 2077 in a future dystopian Italy.  Players take on the role of top executives of huge corporations that expand their influence in the northern Italian cities (Bologna, Pisa, Firenze, Milano) to become the most powerful family in the country.

The board is setup on the table – it has the scoreboard on it as well as the influence track.  Area on the sides of the board are reserved for the Available city cards (top), Quarantine zone (bottom) and Influence area (left side).    Each player chooses a corporation and takes their token to keep in front of them, and puts the matching score piece on the 10 spot on the Score track.  The Influence marker is placed on a random resource, and the priority marker is placed on the “10>1” space.

Each city has its own card deck.  With the Exterminator card from each held out, each player is dealt one card from each deck, and one card from each deck is placed in the Quarantine Zone (the area below the score track), and a Plague token is placed on each card in said Quarantine zone.  The Exterminator card for each deck is then shuffled in, and the top card is dealt from each deck to by the first available City card (the area above the board).  There is now a draft from the player hands.  Each player looks at their hand of cards, and all players secretly and simultaneously choose a card to lay face down in front of them, passing the rest of their hand to the left.  This is repeated 4 times until each player has a hand of 4 City cards.  They are then flipped over in front of the owners.  Finally, the resources are shuffled and each player gets a starting hand of 6 Resource cards.

Once you are setup, the game is then played over three rounds.  Each round has a number of tricks in it – ending when all the players are not able to draw a card after a trick to replenish their hand.  The current starting player starts the trick by playing any card they want from their hand.  Play then goes clockwise around the board with each player choosing a card that they like.  They are not required to play a card which follows the suit of the lead card; they can play whatever card they like.

As I mentioned in setup, just under the scoreboard is an area with an influence track.  The highlighted suit there is the current trump suit; that is this particular suit will automatically beat all the other suits.  Just above this track are two spaces “1>10” and “10>1”.  Whichever choice is highlighted here tells you whether higher or lower valued cards are better.

The winner of the trick gets to choose a card from two options:

The non-winners of the trick keep the card which they played (but if the winner chose the card of an opponent, that player gets to choose one of the available City cards)

Each of the Resource cards has an effect icon at the bottom of the card.  The collected Resource cards should be stacked so that these icons can be seen.  Whenever a player collects a pair of cards with matching icons, the corresponding effect is immediately resolved, and that pair of cards is discarded.  The effects are

If you take a City card, it is stacked with other cards from the same city. The influence over that particular city is seen in the number at the top of the card (between 1 and 3).  There are also ten different building types.  If you gain 3 cards of the same building type, you also take the control card for that type on the 3X side.  If you get a 4th card of that type, you flip over the card to the 4X side.  If the City card is a Governor card, it does not have any influence, but it will score points on its own and break ties.  If you get the Exterminator card, you play it immediately to remove a Plague token from any card in the Quarantine zone and add it to your area.  Alternatively, you can simply gain 2VP.  Either way, the Exterminator card is removed from the game after use. 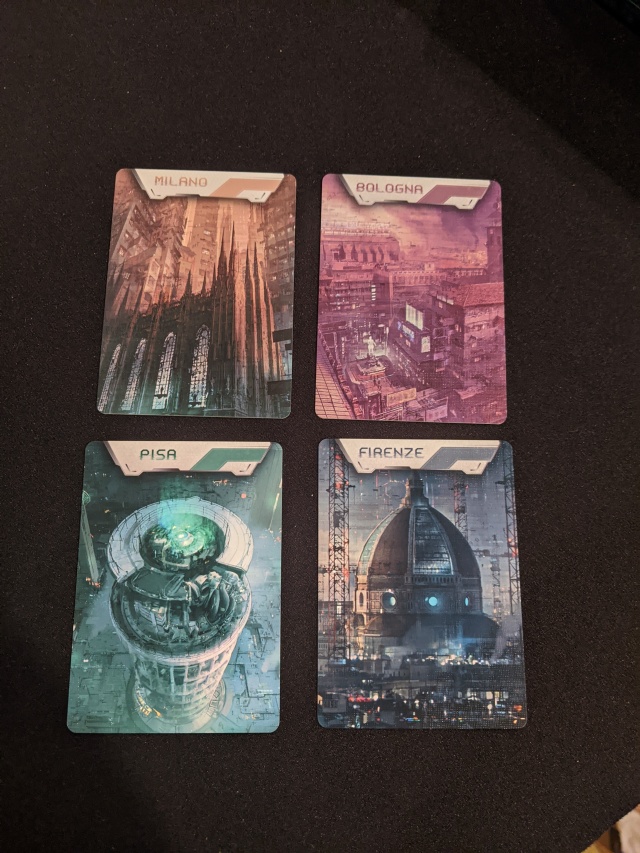 Cards are gained in clockwise order starting with the winner of the trick.  After cards are gained and effects are resolved, all players draw another card from the Draw Deck to replenish their hands to 6.  If there are not enough cards for all players to draw, the round ends.  Otherwise, the person who just won the trick leads a card to start the next trick.

If the round ends, there is a short end-of-round scoring phase.

First, each city is scored for influence (by adding up the sum of the numbers of cards pertaining to those cities) – 5VP for first place, 3VP for second place.  Ties are broking in favor of the player who holds the Governor card for that city.  IF there is no governor, the points are given to both players.

Next, each Governor gives 2VPs whether it helped break a tie or not

The game is played over three rounds as such. If there is another round to be played, the Resource deck is remade and shuffled, and players get a new hand of 6 cards for the next round.  If this is the end of the third round, the game ends.  There is no end game scoring. The player with the most points wins. Ties broken in favor of the player with the most Governors.

Influentia is an interesting take on the trick taking game (if it is in fact a trick taking game).  It is another game where the tricks are not necessarily tricks but rather a way to apportion cards to your play area – like Honshu and Ugly Christmas Sweaters.  There is some advantage to winning as you get the ability to pick which card you want to take into your area, but sometimes you end up playing an off-suit card because you’d rather try to get that card into your own play area, possibly for the action that it would confer.  (Of course, you should always look around and see what other people are collecting, as there is always the chance the winner of the trick would prefer your card, and then he will steal it from you!)

I like the way that there is a bit of fluidity to the game.  Given that both the Politics action as well as the Exterminator action can possibly change the trump suit or priority order, the value of cards in your hand can change – and this keeps you on your toes, constantly looking to see where you can gain more influence with cards that were previously crummy…

I feel that you probably need to try to win tricks along the way as the city cards are really the main way to gain victory points – you need to gain control of the four cities, or at least own the governor cards, in order to score big points.   You also cannot get control markers without gaining City cards…

I had a difficult time in my first few games predicting which tricks I could win as it took me awhile to get used to the “do not have to follow suit” rule – and I would see cards I thought were winner succumb to a trump card played later in the trick.  However, as I mentioned above, sometimes people played cards that I thought were strange – only to see them put the losing card in their own play area…

I think this game does a good job at making all the cards worth something though.  Even if you get dealt a bunch of middling cards – thus, they would never be the “best” regardless of the rank order, you can still work on pairing them together to get special actions. While I’ll admit that these rewards are generally not as good as a City card, they do allow players to make the best of whatever hand they are dealt – and I do very much like that aspect of the game.

Rules – seem to explain things ok.  I’d like the rules to have a better manifest.  IN a trick taking game, I think it’s crucial for all players to know what the ranks of the cards are.  They just tell you in the rules that there are 10 each of the 5 resource suits – but nowhere does it tell you the breakdown of values – for the record, it’s a simple 1 to 10 range for each suit, which might have been predicted – but I still would have liked that spelled out.

The cards are a nice quality, with a clean linen finish. I know that the dystopian artwork theme is the reason why everything is so dark; but I would have liked the Resource cards to be a little more distinct – whether it be colored icons for the suits or a slightly different colored background.  We now play with extra lamps on the table, and we still have trouble at times differentiating between the different suits, but that could just be the downside of playing in a group of middle aged folks who all need glasses…

I have 4 different suits in my hand, can you see that?

Like Honshu (the game which this reminds me of the most) – I don’t know whether the game is actually a trick-taking game – but in the end, the nomenclature shouldn’t matter.  Influentia is a card game that provides players with a number of interesting decisions to make and a novel set of rules that are fun to figure out.  At this point, I am not sure if this will be a keeper, but I know I’d like to play it a few more times as I try to understand how the game works!  It’s definitely not an ordinary card game, and one that I think is worth the time spent exploring it.

Dale Yu is the Editor of the Opinionated Gamers. He can occasionally be found working as a volunteer administrator for BoardGameGeek, and he previously wrote for BoardGame News.
View all posts by Dale Yu →
This entry was posted in Essen 2020, First Impressions. Bookmark the permalink.