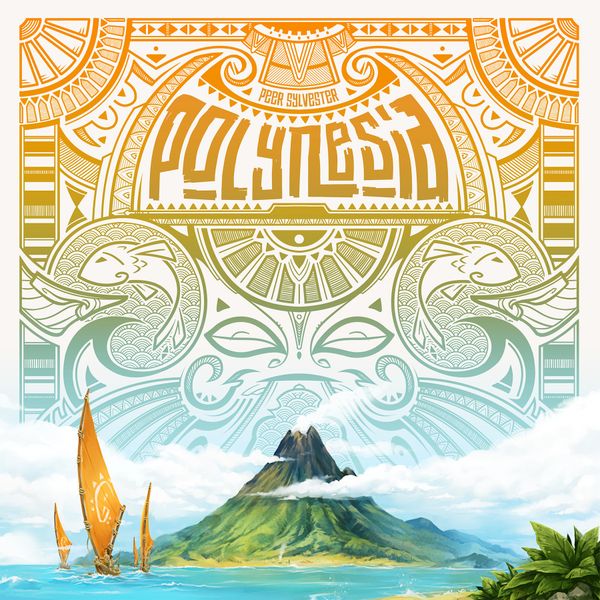 Peer Sylvester has always been a game designer whose designs have intrigued me.  Going all the way back to Koenig von Siam in 2007 and Filipino Fruit Market in 2009, I have always made a point of checking out his new games.  This year, there are two from Peer – Village Green (from Osprey) and Polynesia.  I read a designer diary about this on BGG, and I knew that this was a game that I was going to want to try out. Ludonova has been gracious enough to send us a copy to play, and though we’ve only played it once, I thought that it would be best to get a First Impression out this winter as there are many people who I know what to get more information.

Polynesia is a game that recreates the exploration of the Pacific of the first seafarers.  The designer admits that he has taken some liberties in history – adding in a volcano to give the Tribe Members a reason to get off the starting island and explore a bit… Over the course of the game, players will try to move their tribe members off the starting islands onto the most valuable islands in the sea.  They will also be rewarded if they can meet the criteria on the Tide cards which are drawn at the start of each game.

The main starting island is found in the bottom left corner, and each player has 5 of their tribe members on the starting island.  There is also a volcano found here, and the game is played until this volcano erupts! The other 8 tribe members are all placed on the player’s personal board – there is a row of slots for them.  Each player also gets the 15 ships in their color as well as 3 Fish and 3 Shells. Fish and Shells are the two different currencies in the game.

The rest of the board has a bunch of islands in the sea with four pairs tied together with a black outline around the two islands. Several of the islands will get reward tokens placed face down on them in setup. There are many travel routes between the islands denoted by white dotted lines.  There are also three permanent travel routes from the main island to the three nearest islands – these routes are solid orange, and they are active at all times.  Three Tide cards are dealt out, and they will be in effect for the whole game.  Finally, the 10 Lava Stones (6 red, 3 grey, 1 black) are placed in the bag.

Turns are played in two phases – an Action Phase and a Maintenance Phase.  There is a track at the top of the board that will help you navigate through the phases.   The Action phase has three distinct rounds, and the first three spaces on the track (3, 2, 1) go with this phase.  In each round, players must take one of the 4 actions.  The power of the action is directly related to the number on the track associated with this round: 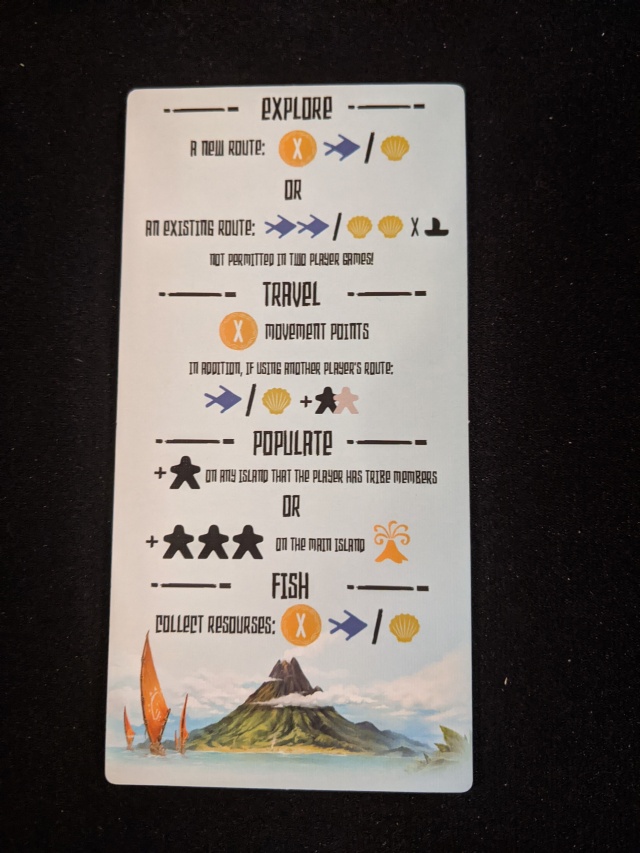 After the three rounds of the Action phase are completed, there are some steps to take in the Maintenance phase (again, easily delineated by the track) 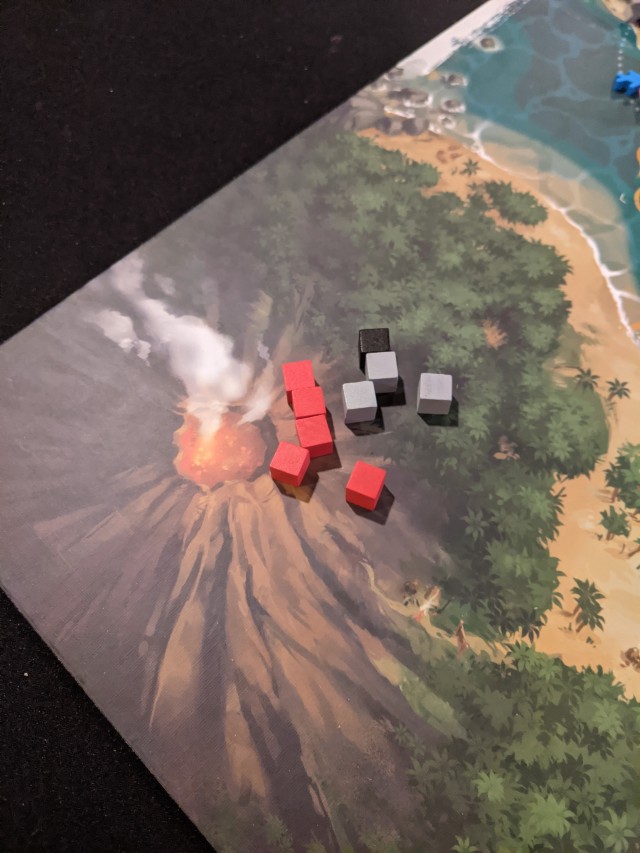 The game ends immediately when the sixth lava stone is drawn from the bag.  The Starting Island and the three closest islands (the ones connected with the solid orange lines) are all destroyed. Any Tribe Members on these four islands are returned to your personal board.  Fill the empty spaces from right to left, and if you fill up the entire main row, move to the next row and continue filling.

The player with the most points wins. Ties broken in favor of the player who has occupied the most islands at the end of the game.

Polynesia is a very intriguing game (which seems to be a hallmark of Peer’s games – at least IMHO).  There are a number of things to watch out for on each turn, and not quite enough actions to do everything that you want to do.  I have enjoyed the difficult decisions created by the unique (at least to me) countdown-action-track.    There is a nice push and pull about trying to decide which action to take with  the “3” power and so on down the line.  Maybe you should gather resources on the 3, to max out the gain – but if you do, perhaps an opponent will claim a travel route first, and now it’s going to cost you extra to travel along that route…   Or maybe you just want to wait out claiming a travel route to get a lower cost…. But there is always the risk that someone will beat you to it.  Furthermore, if you lose the race to a route, the opponent might pay for it with a currency that you don’t have, and you might not be able to travel on it at all!

The first part of the game has a nice racing feel to it as players expand out of the main island, trying to secure nice routes and get meeples on income producing islands. Managing the routes is an interesting exercise… if you set yourself up well, you might be able to get a couple of free moves from your opponents if they use your route.  In this game, even a few free moves can be important…  Don’t forget that by the end of the game, any meeples left on the start island or the first ring away will be burned by the lava from the erupting volcano!  So, any movement away which doesn’t cost you an action just lets you do something else instead. 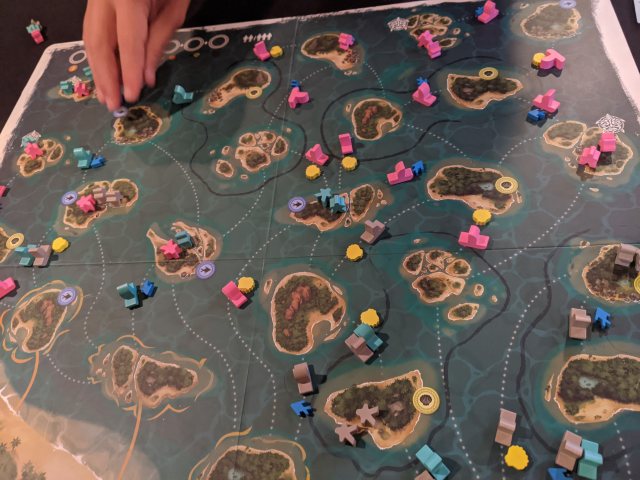 After a few rounds of this though, the strategies can vary significantly.  Some may continue exploring outward, working on reward tokens.  Others may just start getting meeples off their player board and onto the map.  You have an interesting decision here – you can move three at a time onto the start island or a single one to an island that you occupy.  For me, the math seems better to put one on a far away island because then you don’t need to worry about moving the 2 steps away to be safe from the volcano… but early on, maybe you want them on the start island because you don’t know which direction they will eventually end up moving?

The Tide cards add some interesting varied scoring opportunities to each game, and they have kept the game from feeling same-y in my initial plays.  Each time, I have tried to focus on at least one tide card, and the rewards are good enough to make it worthwhile.   The rules do a good job of giving explanations/clarifications on the more complicated Tide cards.

Each individual round goes fairly quickly as there are only three turns per player in the round; though you might want to take an extra second or two to monitor the currency situation of the current starting player… The Decline action, which causes everyone to discard all remaining currency of one type, can be a huge factor.  Trying to figure out which one will be discarded may affect which resources you collect or spend this turn.  We have been surprised at least once when the start player discarded the currency he had more of – mostly because he had a decent income in that type and none of the other players did – resulting in a decent advantage for the next round…

The variable but somewhat predictable end to the game adds some interesting wrinkles.  The game could go as few as 5 rounds but could also go as long as 9 – however, you can track the progress of the red cubes to get a decent gauge on the likelihood of the game ending soon… and this will help you plan your strategies.  Early on, you can do whatever you want, but as the red cubes come out, you need to be looking at your endgame strategy.  The loss/gain of points from meeples on the starting islands can be huge.  You also need to be constantly looking at how you’re doing with the tide cards as they often require specific board positions for maximum score.

Overall, the game is interesting with many things to consider each turn.  It is admittedly a bit dry and abstract, and if you are looking for more theme interwoven into the game, this may not be for you.  I’m generally not bothered by that, and I have liked the puzzle that the game presents.  There are a lot of moving parts, and rarely is there a single move/strategy that seems optimal.  This causes you to constantly re-evaluate the board and the positions of the opponents to figure out what seems best now

As you might expect, there is certainly the possibility for analysis paralysis with this sort of game, but I’ve been blessed with a regular group of gamers that can make decisions fairly quickly  Our games have come in closer to 60 minutes, especially the game that ended super early in the 6th round IIRC with a black cube in round 6 leading to the final 2 red cubes being drawn!  With the right group, the game moves along at a good pace, and it is a pretty intense game.

For now I want to still explore it (and I hope to win the game at least once at some point).  Congrats to Peer for creating yet another complex game that I enjoy.

Simon W (1 play) – I was not enamoured with Polynesia when I played it during Spiel. I thought my (only) game dragged on and became too repetitive.

Mark Jackson (1 play) – all the game mechanics worked just fine but it felt a bit like I was rummaging about on the board. I’m not the best source for an opinion on this style of game design, so take what I say with a grain of salt.

Dale Yu is the Editor of the Opinionated Gamers. He can occasionally be found working as a volunteer administrator for BoardGameGeek, and he previously wrote for BoardGame News.
View all posts by Dale Yu →
This entry was posted in Essen 2020, First Impressions. Bookmark the permalink.