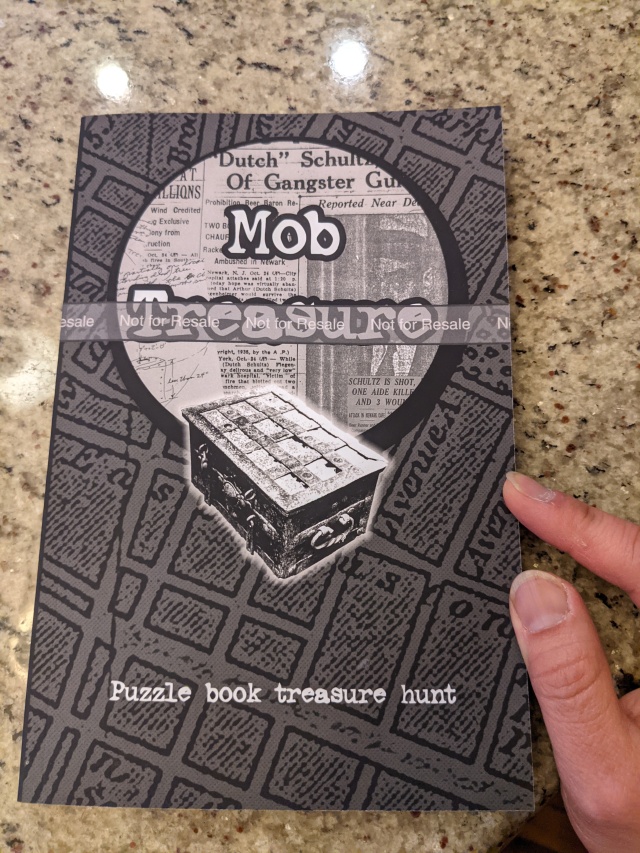 I was approached by the author of Mob Treasure to take an advanced look at his treasure hunt book, Mob Treasure.  The plans are for the book to go live on Kickstarter this week, and since we’ve had fun doing similar books in the past (https://opinionatedgamers.com/2018/11/09/preview-codex-enigmatum/), we were happy to give this one a try as well.  The Crux Club is based in New York City, and it appears that they do outdoor escape room activities (as well as an upcoming one that uses Augmented reality!) and puzzle books. 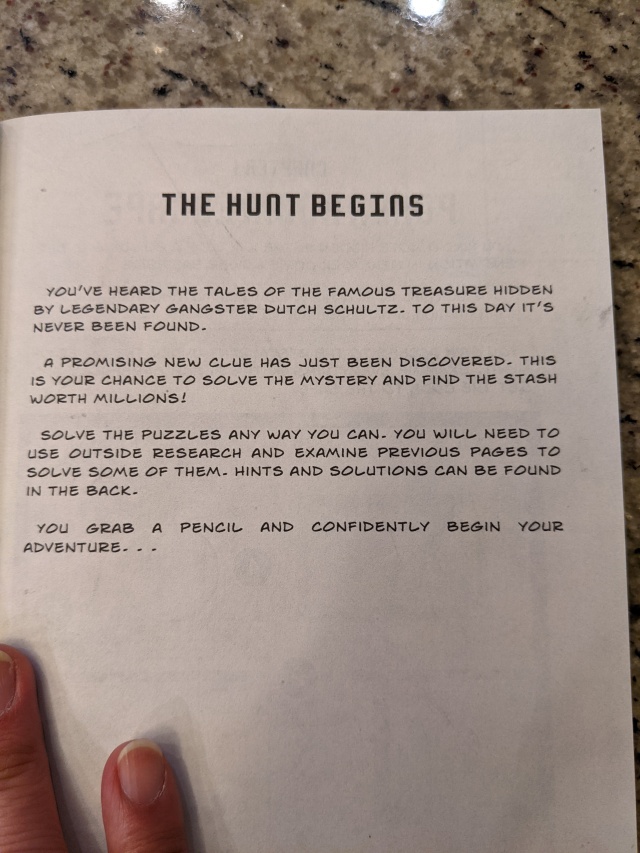 One snowy afternoon (and evening), I sat down on the couch with a pencil in my hand and a thin paperback on my lap.  The story here is: “  This book is inspired by the true story of a missing treasure hidden by New York City beer baron Dutch Schultz. On his deathbed in 1935, the infamous mobster rambled on incoherently for hours, possibly revealing the location of his millions. This scenario has captivated those who heard the tale and even inspired William S. Burroughs to write a screenplay titled “The Last Words of Dutch Schultz”. Mob Treasure may also lead you to the cache – if you can crack the puzzles. Infiltrate secret locations to find the lost journal of a treasure hunter and embark on a quest to find heaps of hidden cash!” 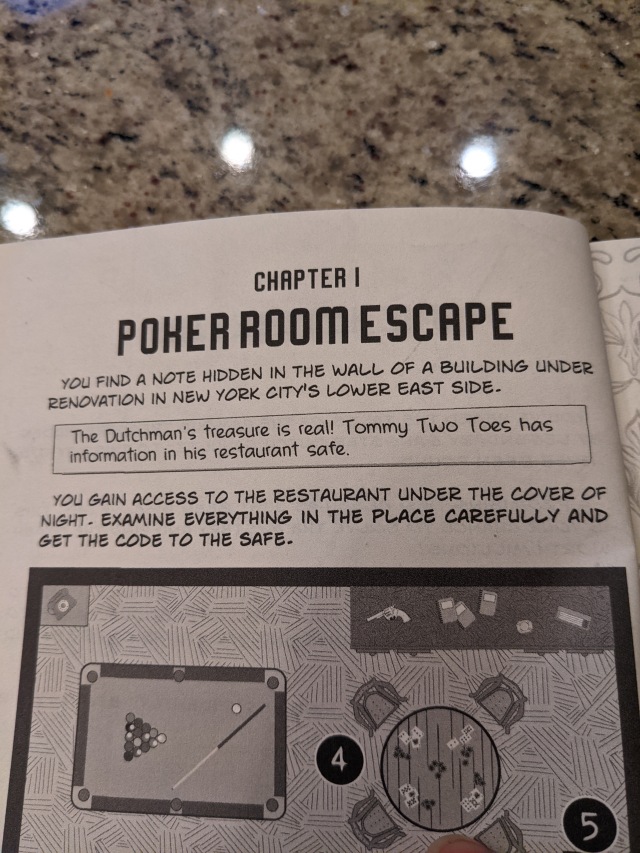 The book is split up into 15 different chapters, each with multiple puzzles and its own “metapuzzle”.   There is a nice variety of puzzle types included in the book – some traditional word play, some visual only, and some surprises that I really can’t describe without spoiling them.  The difficulty of the puzzles is variable.  Some are quite simple and could be solved in seconds while others stumped me, even after taking the hint provided in the back of the book.  Overall though, I felt like most of the puzzles were fair and I enjoyed challenging myself against them.  Given the varied types of puzzles in the book, there was usually something new to look at (and keep me from getting frustrated). 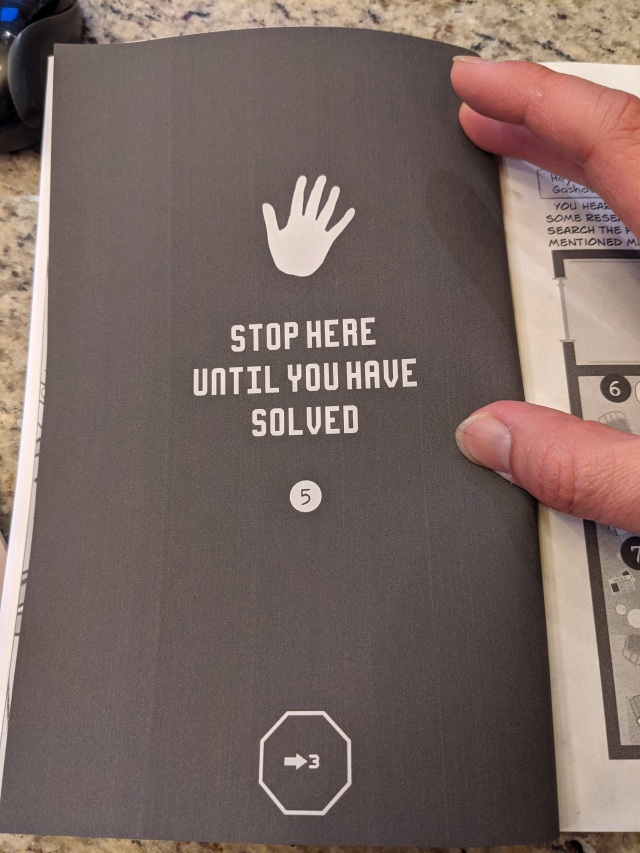 As I mentioned above, there is a hint section near the back of the book.  Each puzzle has a single clarifying hint.  Usually this is enough, but sadly, if the hint doesn’t help you, there’s nothing else offered other than looking up the answer.  I needed hints maybe 20% of the time here, and unfortunately, on more than a few occasions, I already had figured out whatever one piece of information was being hinted at.  Thus, I was pretty much left to figure it out on my own…  It a few cases, my wife was able to come over and help me out (sometimes you just need a new pair of eyes to see a puzzle a different way), but more often than not, I just had to look up the answer. 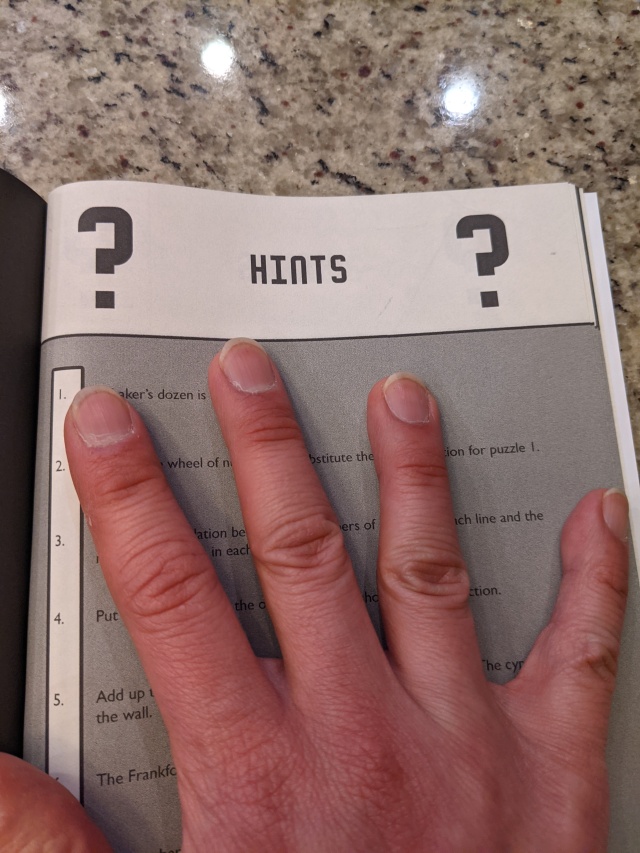 The book is an analog affair – there is no website to check your answers, so you simply turn to the very back of the book where a few pages have the 75 puzzle answers in a row.  I was a little disappointed in this setup because there were a few times when I ended up accidentally reading the answer to the following puzzle while trying to check my progress on the previous one.  I eventually stuck a folded piece of paper there – both to use as a bookmark as well as a shield – but, the answer pages could have used a little more spacing or some sort of way to disguise the answer from accidental discovery.  Of course, I have a preview book, and there could be changes made by the time the KS product is complete.  I would personally hope for a website that serves as an answer checker or answer guide as it would be harder to see information that you didn’t want to see. 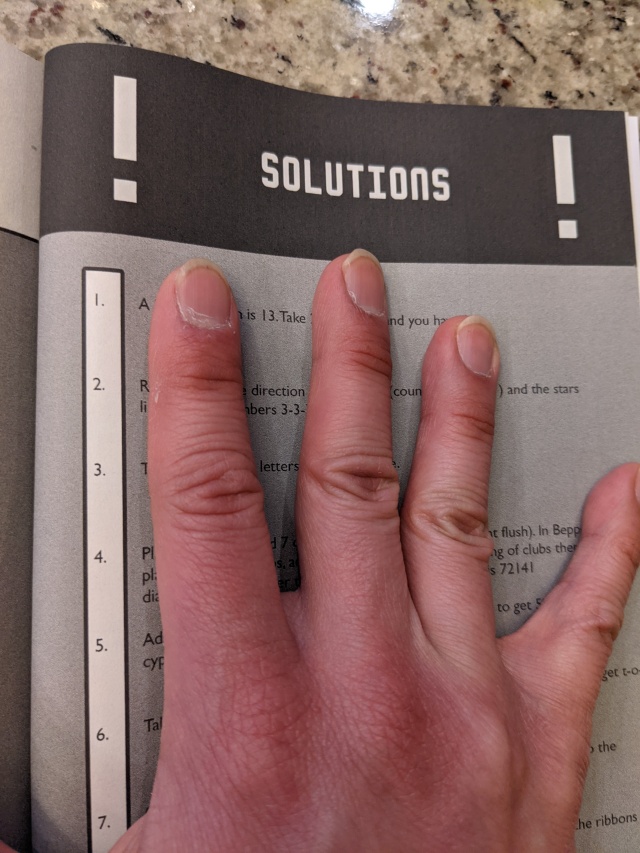 With each successive chapter, you get a few paragraphs to further the story of Dutch Schultz and his treasure, and it’s an interesting tale.  I mean, don’t get me wrong, I’m here for the puzzles – but it was an interesting story nevertheless.  It was an enjoyable experience and a really good way to spend a full day inside.

I’ve definitely added the Crux Club on my list of things to check out the next time that I find myself in the Big Apple.  The idea of an augmented reality hunt sounds awesome, and I like the style of puzzles created by the group.

Dale Yu is the Editor of the Opinionated Gamers. He can occasionally be found working as a volunteer administrator for BoardGameGeek, and he previously wrote for BoardGame News.
View all posts by Dale Yu →
This entry was posted in Kickstarter, Preview. Bookmark the permalink.