Sometimes it is kind of difficult to find three games that go together for this piece, other times like this month, it’s fairly easy. January 2021 was a fresh beginning, an adios to the year that was 2020. We’re still feeling the effects of the pandemic around here, but we saw the numbers dropping and folks started getting their Vaccinations. A fresh beginning nonetheless. Further seeing my shift back away from playing online games, only one, War Chest, which I really enjoy. Twenty nine plays, of 18 unique games, TEN of them being new to me. Surprising thing, I liked nine of those ten in some way, we won’t discuss the other one as it’s an extremely popular card game about cats, and it served its purpose that evening. We played some big games in January, Dune Imperium (need to play again soon), Gloomhaven Jaws of the Lion (Felt good to get back at that one), Lost Ruins of Arnak (declining satisfaction) & Too Many Bones (I am really glad to have played this one and I look forward to the next one), but we’re here to talk about three small games. Three small games from Kickstarter no less, a Kickstarter ran by Board Game Tables. 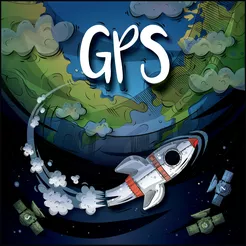 First up, we’ll touch on GPS. GPS was formerly known as Finito! Designed by Hartmut Kommerell and released by Schmidt Spiele  in their Easy Play series (a theme that runs through releases from Board Game Tables, see Bites). A game that I have honestly never played, nor even heard of until this Kickstarter, so there will be no comparisons from me. GPS uses one of the favorite mechanics of gamers, a spinner. GPS is a simple game of aligning your satellites in order. A player wins the game as soon as their satellites that are numbered 1-12 are in sequential order around the Earth. On a turn each player has three satellites in front of them face up, one person will spin the spinner and that will tell them where they can place one of the three face up satellites that they have. Sometimes this is an easy choice, other times it’s far more difficult. You do this all knowing that after you have placed all of your initial satellites you will be spinning the spinner to tell you where you can move satellites that have already been placed. Dead simple, I promise, but executing your plans will not always be simple. You see, spinners are random, a lot like dice and shuffled decks of cards. You know the possibilities, so it’s not completely random, but you never know where it’s going to stop, which can create some fun lighthearted, tense moments. Of the three, GPS was my least favorite, but that doesn’t mean that we didn’t have fun with it. It’s also the most appealing on the table, with a wonderful table presence as the game progresses, especially at the higher player counts when all of the satellites are in play. The game is kind of easily disturbable, meaning that it was easy to knock something astray and while its not awful with that happens, there can be a bit of rearranging of the satellites that needs to happen. Is GPS going to be for everyone? Absolutely not, the random averse amongst you will probably scoff at GPS, but I don’t know that it’s really about the randomness, or the careful planning involved that could be rendered useless at the flick of the rocket. 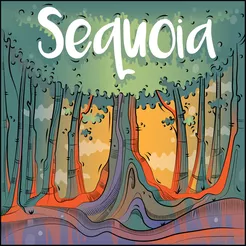 Sequoia is an area majorities game that plays in a 10-15 minute time frame, with dice! Designed by Chad DeShon, Sequoia sees players with five dice, and simultaneously everyone rolls their dice and then chooses a combination of four of them to make two numbers ranging from two to twelve, meaning that you combine two dice to make two numbers, the fifth die is ignored. After everyone has done that, the dice are revealed and you grow your sequoias on the numbers you have combined on your dice. Each player has a number of trees to place, stacking them so that your sequoia grows as you place more on the numbers. When the players are out of tree pieces, majorities are scored, if there are ties, there will be rounds added to the end to see who wins those, which in theory could create some tense endings. Sequoia is a solid game, one that I actively enjoy playing and look forward to my next play. One thing that was pointed out to me is that the green player’s trees do kind of blend in with the cards that you are placing them on, especially in one place, so you may find yourself double checking just how tall the green player’s sequoias are a bit more than other players. 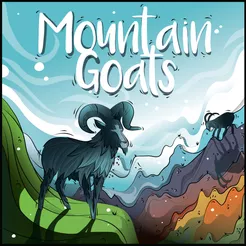 So far we have a spinner and area majorities, now we have some plain ol’ king of the hill dice rolling with Mountain Goats. Mountain Goats is a reimplementation of the game Level X designed by Stefan Risthaus. That’s right, the same designer as Gentes and Arkwright. Level X was a title in the Schmidt Spiele “Easy Play” line, and it keeps that motto in this version from Board Game Tables. Everyone at the table has six goats that they place below each of the mountains that are laid out on the table. Those mountains are labeled, five through ten. The five has four spaces to the top and the ten has two spaces to the top. On a turn, players roll their four dice and create combinations with them with the numbers matching the mountains. So if a player rolls a three, four, five and six. They could advance up the ten and the eight, or they could advance up the seven, five and six. The object is to be the goat at the top of the mountain so that when you roll that number again, you gain scoring chips. The other goats are trying to get there too though, and if they do, they knock you to back down to the bottom while they stay at the top collecting point tokens. Collect point tokens for each of the mountains and you’ll grab a special bonus scoring token for even more points. The game ends either when all the bonus tokens are gone, or three of the mountains token piles have been exhausted, the player with the most points wins! Absolutely my favorite of the three, Mountain Goats has that classic dice chucker feel, almost Can’t Stop like, although in this one, you have to stop after one roll. It’s a wonderful little game.

One thing I hesitate to do is call games “fillers”. I know that we like to have terminology for all things as gamers, I just tend to think that the term feels a bit demeaning when folks use it. I love these short play games, always have, always will, and I am a bit irritated with myself that I didn’t back these and had to rely on friends to bring them over this month. They manage to pack an awful lot of play into10 to 20 minutes of gaming.  As is the norm with Board Game Tables titles, the production value is pretty spot on, especially given the small box nature of these titles. Of note, I didn’t even try any of the expansions that came with the games. Each title has an expansion to add an extra player and something that just slightly changes up the gameplay, a nice touch for games of this stature. If I had to rank them, Mountain Goats is my favorite of the bunch, with Sequoia closely behind. GPS left me a bit flat after the first play, but after a couple more it started to grow on me, and it is the best looking game of the three to look at on the table, especially at full player count after all those satellites are out there. But I don’t think you can go wrong with any of the three, and I think that all three have a place with game groups that like to play great shorter games, in between longer games, or even just to play a shorter game.

Mark Jackson: I’m a big fan of both Finito & Level X… but I feel like the UI of GPS (Finito) will make it more difficult to play. A game of Finito was typically 10 minutes or so – with each player using their own player board. It’s a great “waiting for your meal” game… or will be once we all get back to hanging out in places waiting for food to be brought to the table. Mountain Goats (Level X) is more interesting to me, since I never managed to get a copy of the original game… and it looks like the UI design is still functional.

Tery: Like Mark J, I am also a fan of Finito and Level X, so I had jumped on this package when it came out. However, I have mixed feelings about it.

Finito is a great game; whether you call it a filler or a short game, it takes less than 10 minutes and can be played by any number of players without increasing the length or downtime. In fact, many people I know keep two copies in the same box.  It can also be explained in less than a minute and gamers and non-gamers alike can enjoy it.  I don’t own a copy of the game and was very excited to see GPS come out, but it fell flat for me. The developers added a lot of chrome that makes it prettier, but it doesn’t enhance the game experience at all and in fact makes it harder to play. I will be sticking with my homemade wooden circles and paper print out of the board.

Mountain Goats on the other hand, is great. The basic game play is the same, but the redesign of the components gives it a different feel and I prefer it. It is very well done and I won’t miss the older version.

Sequoia was completely new to me, but I really enjoyed my one play; I look forward to getting this back to the table when I am back to my game group.