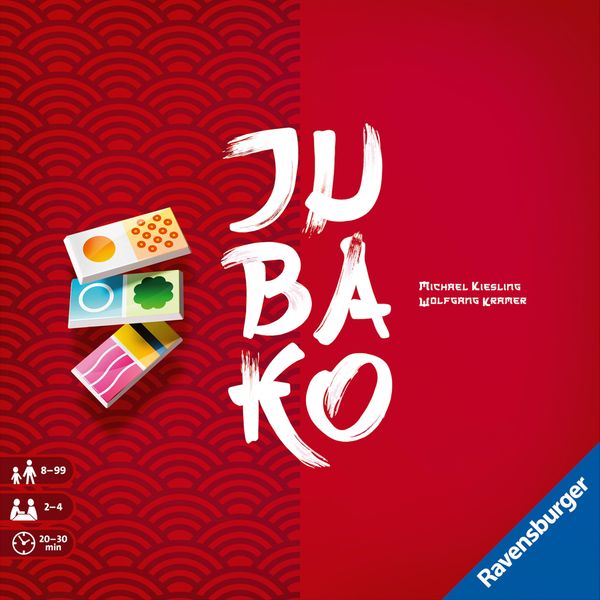 In this game, players each get their own board which represents a Jubako box – that is a special sort of bento box where meals are organized.  Jubako are normally used for New Year’s Day, but thankfully, in this game, you’ll use them every day of the year.

The jubako board has a 5×5 grid in the center with some preprintedj squares on them.  There are 12 different foods in the game, and they are scattered amongst 78 different domino tiles.  These are shuffled, and each player gets a starting hand of 2 domino tiles.  The rest are placed face down on the table, and then a display of 4 domino tiles is revealed.  There is a scoring track that runs along the outer border of the player board, and you put your marker on the 0 space to start. 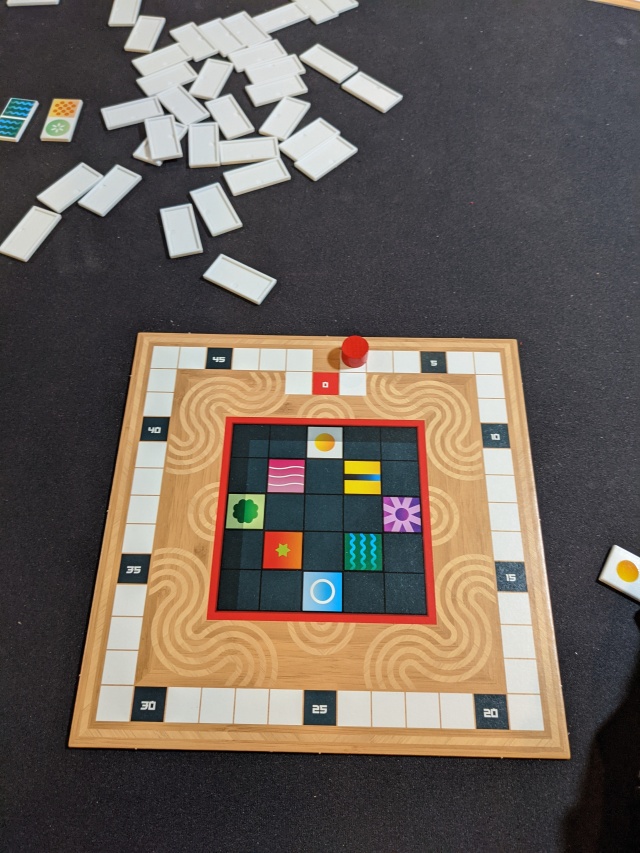 On a turn, you first draw a tile – either one of the four face up tiles or a face down mystery tile  (my usual term of mystery meat might actually apply better than usual here…).  Then, you place one of the three tiles in your hand onto your player board.  The tile can be placed on any two empty spaces without restriction.  You can also lay the new piece over half a tile, a full tile or portions of two tiles – so long as at least one of the halves matches the symbol underneath it.  Next you score for the turn – choose one of the two food types seen on the tile you played this turn and score one point for each visible occurrence of that food type on your board.  You also score a bonus 5 points if you placed your tile on top of other tile(s) and both halves match the foods underneath them.  In the unlikely event that you cannot place any of your three tiles, you simply discard one and take a 1 point penalty.  Then, refresh the tile display if needed and then next player takes their turn.  The game continues until all the tiles are played.  There is no final scoring.  Whoever has the most points wins.  Ties go to the player with the most available space on their first layer. 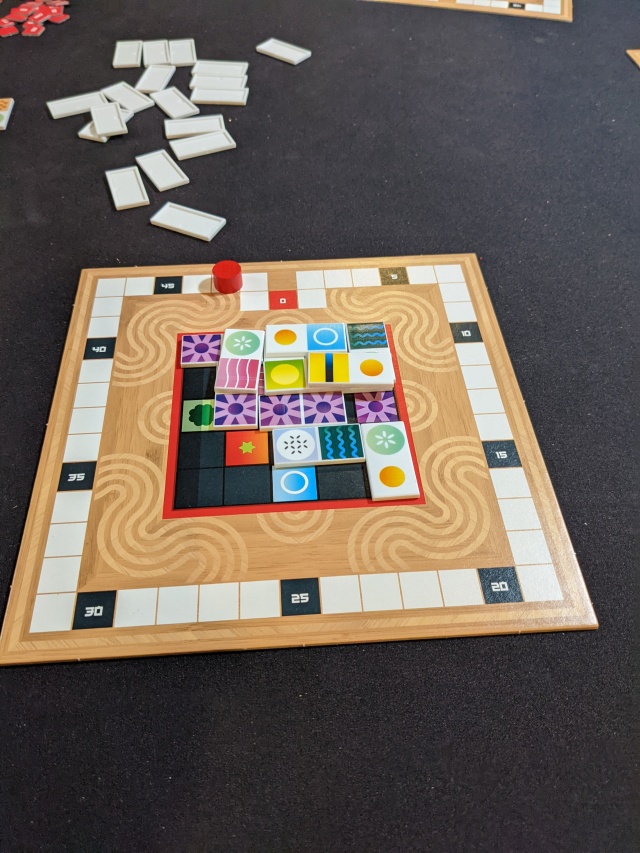 Like many Kramer/Kiesling games, the rules also include a number of variants – each slightly changing the base rules.  One uses the back side of the board which has a smaller grid on it and is more difficult to play on.  Some add different scoring rules.  Others use an additional set of single food tiles to give each player some bonus scoring at the end.  The rules let you pick and choose which variants to include in your game, and many of them can be combined. 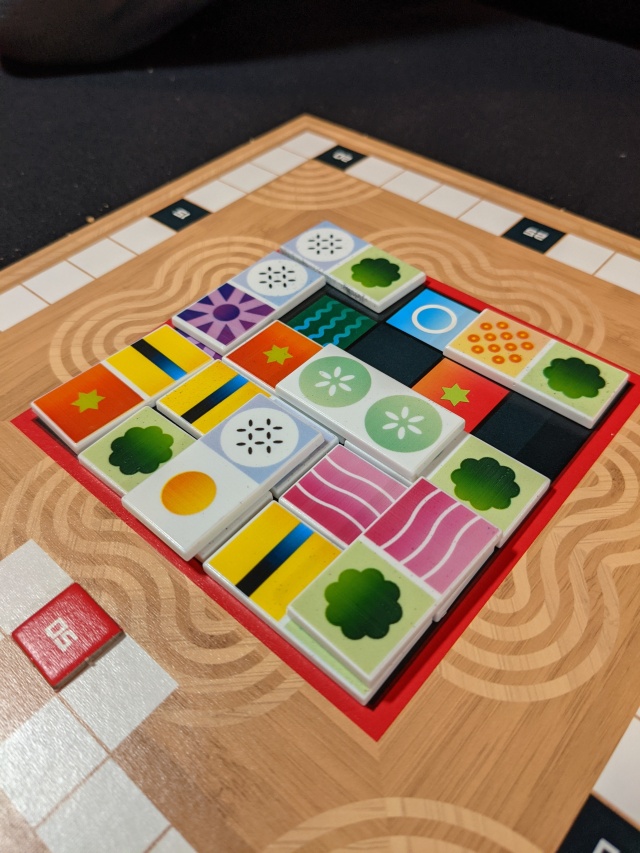 Jubako is a nice domino game that challenges you to use your allotted space well.  For me, there is a nice balance of playing a tile for immediate scoring as well as looking forward to try to make sure that you are leaving yourself with decent scoring options in the future.

Turns tend to go fairly quickly as you have time in between your turns to examine your tiles and also make preliminary plans with the tiles in the display.  Sure, you still have to take the time to choose the right tile and play a tile which is advantageous for you – but much of your deliberation can happen when it’s not your turn.

However, there are also definitely occasions when you have to slow down and take a good look at your board and figure out what you are planning to do next, especially if you are trying to get the 5VP bonus for matching both sides of a placed tile.  This move usually takes a few turns – I generally have to draw the tile first and then make the board match up to the pattern I need. It takes awhile to visualize how the tiles will stack up on your board.

I find that I spend many turns trying not to look at the display – so that the other players can’t tell what I’m fixated on because my next turn depends on being able to draw one of the existing face up tiles in the display!   When my turn comes around, if my desired tile is there, I definitely take it – otherwise, I do try to glance around at my opponent’s boards to make sure that I’m not going to leave an easy 5pt bonus for them in the display!

There is an interesting balance between short and long term scoring. In my first game, i was always trying to maximize my score on the current turn – but what I didn’t see is that sometimes you need to be spending your turns setting up bigger plays such as the 5VP bonus for matching both sides of a tile.  Also, trying to remember the tiles that you’ve seen can help to try to predict which shapes have been mostly drawn.  I had one game where I fiercely protected my visible octopus icons, not realizing that there weren’t many left to be drawn (and that my opponents would hate draft against me and remove and octopi from the display to prevent me from scoring my 8-10VP bonanza). 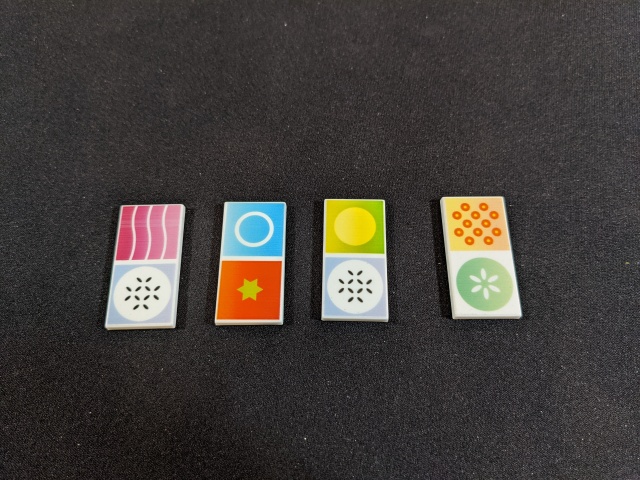 The tiles are plastic and sturdy enough for the game.  They are not scored in the middle like some dominos – and when you lay a tile over half of another one, they do slip around a bit.  The icons are well done, and other than the weird way my brain wants to sometimes see the hardboiled egg and the avocado as the same thing, they are distinct and easy to tell apart from each other.

The rules are simple enough, and there are nice positive and negative graphic examples of the placement rules.  As I’ve mentioned about other K+K games, I’m not a fan of the multitude of variants given in the rules.  I personally would prefer that the designer or developer tell me what they think is the best way to play the game, or maybe even a base and advanced variant – but not give me 6 extra rules that I can use in any combination.  I think I’m in the minority in this opinion, as most other gamers I’ve talked to say that it’s great to have such variety – but it’s not for me…

The one other question that this game brings up is the order of the designer names.  As I cut my teeth on board games (many many years ago), the combination of Kramer and Kiesling was well known, and one with a proven track record of hits.  But, the pair has always been Kramer and Kiesling.  On this box, Herr Kiesling’s name comes first; which would make sense alphabetically, but it’s kinda like listening to music from Oates and Hall.  Or watching an old comedy from Hardy and Laurel.   Does this signify a change in their relationship?  (Ed note – after writing this, I did go and look at the games from the Mask trilogy, and Kiesling does come first on those – so maybe I had just never paid attention in the past?!).  Alphabetical or not, this team of designers continues to make interesting games, and Jubako is one that I’ve enjoyed playing so far.

Brandon K (2 plays) – Two plays in and we enjoyed Jubako quite a bit. The basic game can lead to some fairly straight forward gameplay where you are focusing on one or two items to keep scoring points and hoping to get lucky with tile draws to allow you the five bonus points. Yes, there are a lot of variants in the box, as has seemingly become one of Herr Kiesling’s things, see Miyabi as well. I like the idea of the different variations of scoring in theory, but we’ll have to see if they ever get played. I do enjoy the 3 dimensional tile building games, and this one is no exception, although I am anxious to try the smaller board to see if there is more planning needed and thus the difficulty rampling up.

It’s a tough nut to crack, to manage to create something that has staying power, and I sometimes struggle to figure out what makes things stick around here. I think if the components were a bit heavier and nicer, Jubako would stand a better chance of sticking around, but those dominos easily shift when bumped and such. We’ll just have to see if Jubako manages to stay in rotation and maybe revisit it in the future.