In the press release for Cubitos, it is described as a game with “exciting and engaging push-your-luck racing!  Who doesn’t love to chuck massive handfuls of dice?  Even better if you get to determine what your dice will do!”  As expected, that description got me instantly interested…  Then, the box arrives, and the cover image is a cube of yellow holey cheese (or maybe think Spongebob without eyes and a nose) with super hairy legs, wearing a pair of lederhosen.  And then, I wonder “What did I get myself into?”

As it turns out, the game is a racing game where the inhabitants of Cubitos (a cube shaped world populated by little cube creatures, of course) have their annual Cube Cup race.  The aforementioned dice are the support crew for your runner.  There are two different double sided racetracks included in the box – each of the four tracks gives a different feel to the race.

There are starting dice in two shades of grey, and then 8 colored boxes of 10 dice each; each color representing a different ability.  The sides of the boxes have a convenient reminder of what is on the faces of each color.  Additionally, there are 56 Ability cards (7 each of the 8 colors) – of which 8 will be used in each game.  The rules give plenty of different suggested sets of cards, but you can also choose your own set.  These cards explain the ability of each color die (Which can therefore change with each game).

Each player gets a player board, 2 Runners in their color (one for the chosen racetrack and one for the smaller fan track).  They also start with 9 starting grey dice – 7 light and 2 dark.  The 8 dice boxes are set up around the track, and the 8 chosen Ability cards are placed near the dice box which matches their color.  A Starting player is chosen, and that player gets the Starting Player die in front of them.

The game is played in a number of rounds, each of which has a Roll Phase and then a Run Phase.  The game continues until a player has crossed the finish line of the race course.

In the Roll Phase, players first draw dice from the Draw section of their player board to the Roll section.  At the start of the game, you can draw 9 dice, but you can increase this number by gaining purple +1 hand tokens from the Fan Track as well as temporary +1 dice for each red line on the race track that you trail the first place runner.

Next, all those dice are rolled.  In general the Roll Phase can be done simultaneously; but if it matters,the player with the most dice in their Roll Zone must go first.  If you rolled any “hits” – that is any die with an icon showing (as opposed to a blank face) – these get moved to the active zone on your player board.  You can then choose to push your luck or pass.  If you pass, you are done with this phase.  If you push your luck, all of the misses are picked up and rolled again.  If you have 3 or more dice in your Active zone (at any point this turn) AND you roll all misses, then you bust.  If you bust, all the dice in your Active zone are moved to the Discard zone.  As a consolation, you move your marker one space ahead on the Fan Track and collect any bonuses.  You also may choose to move any dice currently in your Roll Zone to your Discard Zone.

Then in the Run Phase, players can use their abilities as shown on their dice in their Active Zone.  The red ability (the crossed swords) must be calculated, as generally only the person with the most red icons will get that activity. You also calculate the amount of Feet and Coins shown on your dice.

All players can move their movers, one space for each Foot icon as well as 1 space for each 4 coins/credits (blue squares) spent.  Coins are found on dice and are only a theoretical resource; you must use them from your dice or they are lost at the end of the turn.  Credits are generally spent in the same way, but they are represented by physical tokens and can last from round to round.  There is no limit to the number of runners on a space, so movement can happen simultaneously.  If you end your movement on a space with a bonus icon, you get the bonus.  If someone crosses the finish line, the game ends.  Otherwise, the starting dice passes to the next player and another round is played.

Cubitos was a game that flew under my radar initially but after reading some initial reviews, I became interested in giving it a try.  I have an affinity for deck builders and bag builders, and this seemed to have a lot of similar feel to it. Of course, there is no bag in this game, you get to see what dice you have in which zone, and you’re able to choose which dice you want to use – which is a bit of a strategic advantage over a random draw.  This means that in Cubitos, not only do you work on the composition of your dice pool, you also have to spend some energy on the management of the dice location to make sure that you have the particular dice that you want in the next turn.

So far, I’ll admit that I’ve had some really good games, and one notable bad game – though to be fair, the bad game was probably user error because the action cards in that game were completely randomly chosen (and the rules say this is possible but warn you against it).  All the other games have been played with recommended sets from the rules, and they have all worked out well. 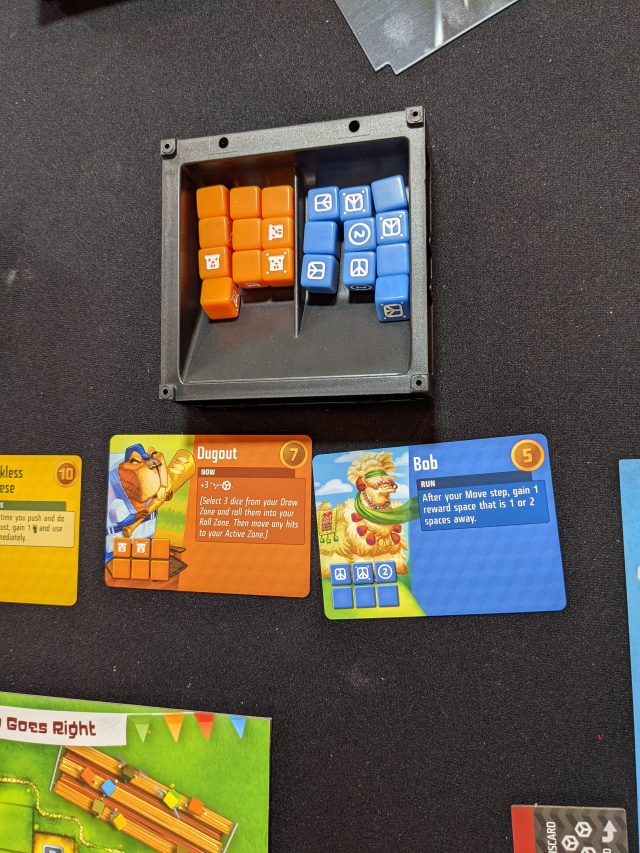 In addition, each of the games with the pre-determined sets has felt a bit different, and I really like that aspect of the game.  Depending on the different actions of the dice as well as the layout of the racetrack, each game has its own little puzzle to solve.  I like to take a good look at the action cards at the start of the game and try to see how to combine the different actions.  Of course, you’ll use more of the lower cost dice first and then move to the more expensive ones as you are able to generate more coins/credits.  The other thing to take into account is the competition for dice, especially in a four-player game where popular dice often sell out, so you have to plan to pick them up early in the game to ensure that you get them in your dice pool.

The game itself is a nice combination of strategy and planning combined with the excitement of the push-your-luck mechanism and the luck of the die roll.  As you collect dice of different colors, you will set up different combinations that you’d like to take advantage of.  You can put the needed dice in the roll zone, but then you have to hope that the dice roll in your favor in order to get the desired result.

I also like the way that the racetracks give you options on how to maneuver around the board.  The better bonus spaces are usually along the periphery of the course, causing you to take a longer route in order to gain the better rewards.  There are even times when you may not use all your feet in order to stop movement on a space with a nice bonus on it.

As you’d expect with a dice game, there is usually a nice ebb and flow of movement in the game, as some rolls will just be better than others.  The races tend to be close as there is a nice catch the leader system built into the game.  First, each time you bust, while you lose out on the effects of a turn, you do gain a space on the fan track which leads to permanent hand size increases – and this can be a huge boon at the end of the game.  Second, the bonus you get for trailing the leader on the track also helps give extra dice to the trailers, and this often turns into more feet to catch up.

The components are nice.  The custom colored dice are great, and they definitely make the game.  There are a bunch of display boxes provided for you, and it did take us a few times to figure out how to get them folded up right.  Depending on the night, we sometimes use the display boxes and sometimes we use our Gametrayz.  The boxes have the advantage of having the dice faces printed on the box but the action card already has this information on it, so the boxes are not mandatory.  Interestingly, there isn’t enough space to put all the boxes in the box bottom without throwing out the insert (which has been summarily recycled to generate the needed space for the storage boxes).

Our first game was a bit slow, but we were learning the flow of the game and watching each other roll the dice and figure out their turns.  However, as we became more comfortable, we started to roll simultaneously and this significantly speeds up the game.  The second half of the turn can usually also be done simultaneously – though there are a few turns (when the last die of a color is being bought) where someone will call for things to go in proper order…

With experience, the game moves along nicely, and my most recent 3p game took only 35 minutes (from the first die roll to the end of the race).  Each game gives you some different combinations to consider, and so far, I am not out of recommended combinations of dice – and I’m sure that the next time I try to set up my own action card set, I’ll have more knowledge to make sure that I choose 8 cards that work well together.

For a nice game that offers a changing set of challenges, I’d recommend Cubitos.  The game is a little less predictable than a deck builder, but there’s something about rolling a bunch of dice that makes the game enjoyable and exciting.