Dale Yu – Review of The Queen of Hansa

The Queen of Hansa 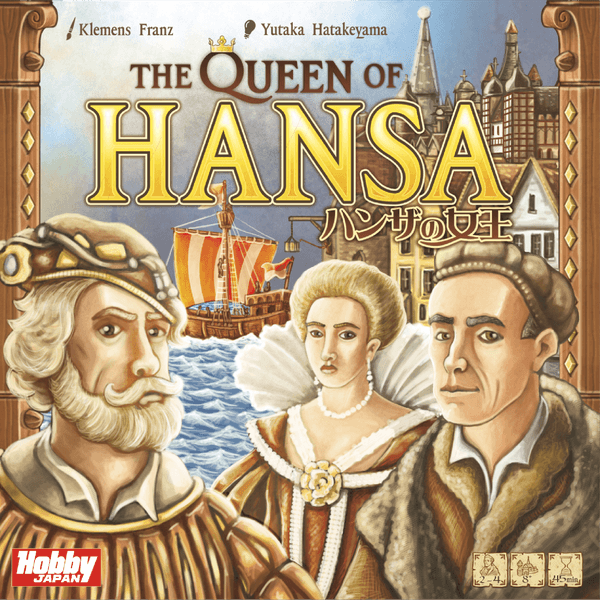 The Queen of Hansa (and actually, all of Hobby Japan) was a game that I hadn’t initially thought of looking at while in Essen last October. It’s a company that I’m not too familiar with, and none of the titles sounded familiar.  However, after a discussion with one of my good friends, Klemens Franz, I got some insider information that they had games I should really check out.  Sure, Klemens is biased as he is the artist for this game – but it was still a good tip, and I’m glad to have listened to my friend.  I discovered this game as well as finding a new reprint of a game that I adored, Tenka Maidou, which I had not been able to acquire – now called Rumble Nation – but more on that in a different review.

In Queen of Hansa, players are merchants plying the seas and ports of the Hanseatic League, trying to be the most successful trader in London, Bruges, Bergen and Novgorod.   There is a game board which shows these four cities as horizontal color coded stripes with the port spaces on the left and sea spaces to the right.  There is also a score board which keeps track of the round, the player’s score, and a prosperity track that records the relative values of the different cities and gives the scoring rubric for the game. 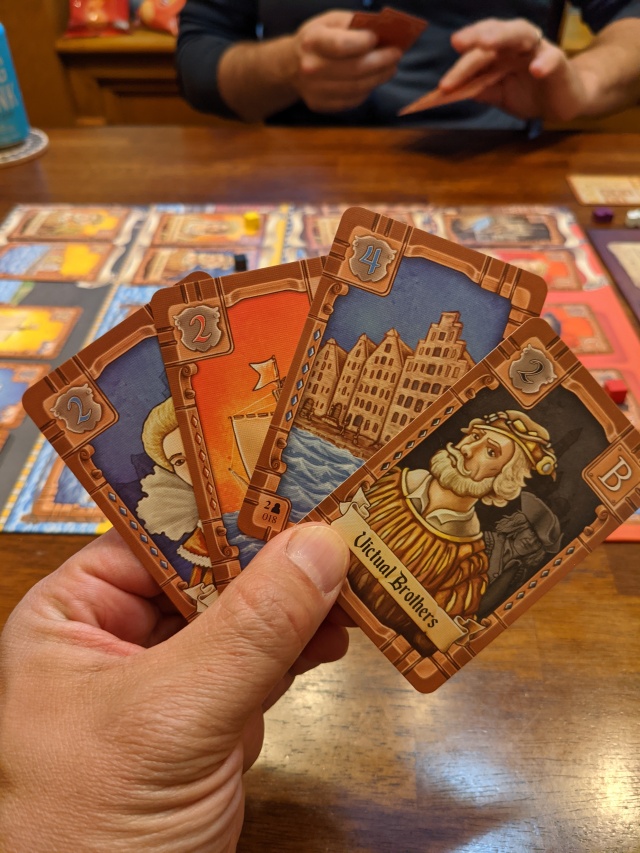 To start the game, a deck is made up of a predetermined number of regular goods cards and luxury goods cards.  These cards have a colored background, an influence value in the upper left and a set label possibly in the upper right.  These are shuffled and then distributed to the spaces (both port and sea) of the four cities.  Each Luxury goods card has a randomly drawn wooden luxury good placed on it.  The game is played over three rounds, each with the same three phases: Acquire Trade cards, Scoring, Storage/Preparation.  Each player starts with a hand of 2 regular trade goods.

Acquire Trade Cards: In this phase, players take turn in order either Trading with a City or Participating in the Council.  When a player Trades with a City, one trade card from his hand is played face up into his area. Then, the player takes a card from the port of the city (left two spaces) that matches the color of the card played.  This newly drawn card is added to your hand.  When a player Participates in the Council, a card from his hand is played face down to his area, then the player moves the prosperity marker of any city one space to the left or right and then takes a new card from any port into his hand. 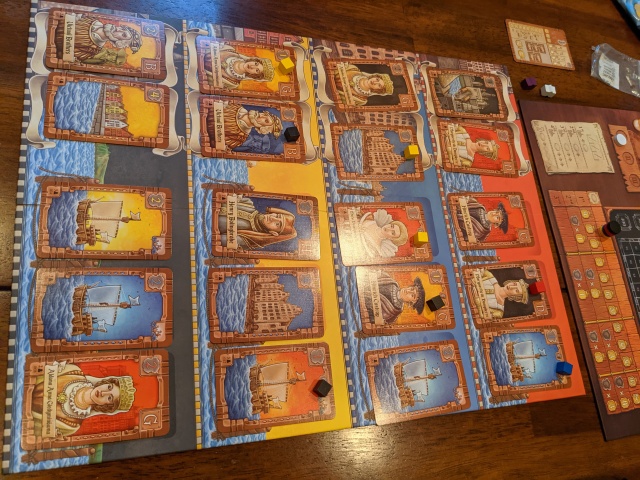 In either event, if a card with a Luxury good is taken, take the wooden cube and place it in your area near any cards of matching color.  Then, refill the port by moving all the cards in that row left (From the sea) to fill in the empty space.  If the final card from the sea is moved into a port, there is a Prosperity shift in that city and this will cause the Prosperity marker of that city to move (per the chart on the scoring board). End this phase by making sure that all players have 2 cards in their hand – as each time a card is played, a new one should be added to the hand from a port.  There are a differing number of rounds in this phase based on player count – 6/5/4 turns for a 2/3/4p game. 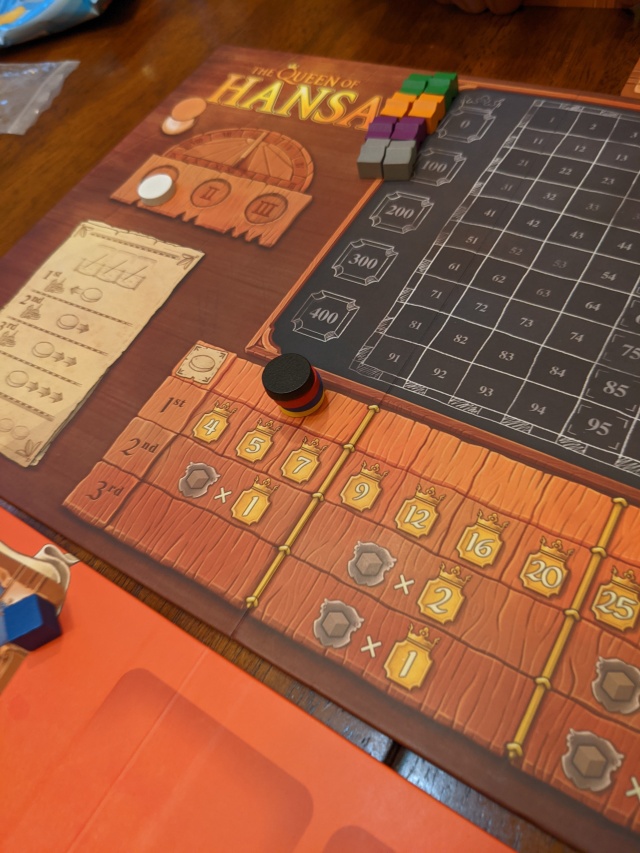 Scoring:  In the scoring phase, each of the cities is scored.  Each player calculates their influence over that city which is equal to the sum of all face up cards in their area in that color plus one point for each luxury good in that color.  Now here’s where it gets a little tricky – you then refer to the scoring chart at the bottom of the scoring board.  Find the column where the influence marker is for that city; the player with the most influence scores a fixed amount as shown just below the marker.  The second place player scores a score equal to his influence multiplied by a factor as shown on the chart; the same goes for third place.  The fourth placed player scores nothing.  Careful attention should be paid to the chart as it could turn out that the second placed player could score more points than the first! Repeat this process for all four cities.  Then, each player scores 2/6/12/20 for 1/2/3/4 different colors of luxury goods.

Storage/Preparation:  Now, each player may keep one luxury good of choice for each face up trade ship in their area.  All others are discarded. The city chart is updated so that the least prosperous city gets moved one space to the right.  Then, a new deck of cards is made to replenish all of the sea spaces which are empty on the board.  The player who currently has the lowest score chooses the starting player for the next round.

After three rounds, the game has a final scoring event.  There are three different ways to score points at the end of the game.

Council Influence – sum up the total influence value of all face down cards (color doesn’t matter); the player with the highest total scores the fixed value for the most prosperous city, 2nd place = scores for 2nd city, etc.  Leave these cards face up now in your area.

Well, from reading the rules, I wasn’t quite sure what to expect.  The designer of the game has no other games listed on BGG, so I have no prior experiences – but man, after playing this, I hope there are more designs to come!  The game is a wonderful mix of set collection (in the final scoring) combined with a bit of area majority along the way.  The push/pull of these two different mechanisms makes the decision of each card significant.

It is important to remember that you only get 16 cards in the whole game, so there really aren’t any throw away decisions.  There are multiple factors that go into each play.  Do you play a card face up (to compete in the end of round majority bonuses?).  If so, which color do you play – is it to help compete in a specific color or is it more important to choose one that allows you to draw a card that you particularly desire?  Ideally, you’d like both to happen, but that’s usually not how it works in real life, so you have to try to choose which path is best… Or, do you play a card facedown?  It’s a bit of a gamble if you’re working on the Council end game bonus scoring; but maybe you’re choosing to do it to modify the standing of one of the cities – or you need to do it because there is a card you specifically want, and there’s no other way for you to draw it from the board.

As I have mentioned above, sometimes the choice of card to draw is as important as the card that you play.  After all, the only way to get cards into your hand is to draw them from the board, so you do want to make sure that you are taking cards that you eventually want to play.

Make sure that you keep an eye on the city scoring track – as the changing status of the cities can affect how you play the game.  It’s interesting how certain spaces on the track might lead to the second most influential player gaining more VPs than the most influential!  Clever card collection (and possible manipulation of the city status track) can lead to big swings in fortune.  The movement of the city markers when the third card is chosen out of each city can also have a big effect – this may discourage you at times from taking a particular card, or sometimes it can be the most desired effect of a particular card play/draw situation.  Suffice it to say, there are a lot of different things to think about when taking your turn – and it is not always clear what is the best plan.

The scoring is somewhat convoluted, and I think some gamers may need a round or two to really see how things work out.  But, once you are familiar with it, the scoring moves along rapidly, and to be honest, the complexity of the system is what makes the game so good IMHO.  Things are clearly spelled out, so you know what happens with each city on any given space, but it’s not entirely clear where players will stand, and what spaces cities will be on, and that makes each decision so complex.

There is a decent risk/reward system in both the council cards as well as the set collection.  If you’re able to get 7 or 8 of the different letters, there is a huge payoff – but you really have to commit to that early on (as the set will take up 50% of all your cards!), and if you miss out on some letters, you’ll be in pretty bad shape….  Getting cubes can pay off both short term and long (if you have ships to store the cubes) – but again, if you’re collecting these things, then you’re not getting the letters nor do you have as much opportunity to play facedown as the ships have to be visible in order to store the luxury goods!

The game moves along quite fast, and I would think that experienced players would get this down to 30-35 minutes.  But in that short time, there are a lot of important decisions to be made.  I am a bit sad that it took us so long to get this game to the table again, but it was worth the wait!  I look forward to more plays of this, and I hope that this will help prove to some of the other Opinionated Gamers that not all great Japanese games have to be small enough to fit in your pocket!

James Nathan: Hobby Japan is a publisher I keep an eye on, as they reprinted the delightful Tenka Meidou/World Rumbling/Rumble Nation and are behind the upcoming Cat in the Box reprint, and this is one I had been curious to try, but didn’t know much about.

For me, it brought back those early memories of when you start in the hobby and everything seems new and clever and wonderful.  When it was easy(ier) to enjoy whatever was on the table in front of you, without your mind drifting to hot takes about how it doesn’t live up to such-and-such a game that came before it.  I quite enjoyed my one play and would be happy to play again.

Dale Yu is the Editor of the Opinionated Gamers. He can occasionally be found working as a volunteer administrator for BoardGameGeek, and he previously wrote for BoardGame News.
View all posts by Dale Yu →
This entry was posted in Essen 2019, Reviews. Bookmark the permalink.