Echoes is a new franchise of puzzle games by Ravensburger.  They remind me a lot of the Adventure game series from Kosmos (also designed by Matthew Dunstan).  For both, I am not sure if I classify them as games, they feel more like interactive fiction to me – but in the end, they are games on BGG, and I enjoy both of them regardless of which classification box they get smushed into….

In this series, the key is listening to the story.  The bulk of the game is moderated by a smartphone app.  You must have  the app running in order to play the game.  The box itself contains some physical pieces; in this case, you get 6 chapter heading tiles and 18 cards (split up into 2 sets of 9).  At the basic level of difficulty, you place the 6 chapter heading tiles and the first set of 9 cards face up on the table, reserving the second set of cards for later.  In the more difficult version, you put all the components face up at the start.

Then, using the smartphone app, you scan the front of any card or tile, and then use the app to listen to the associated audio clip.  As you listen to the different snippets – which range from 5 seconds to nearly a minute – you try to piece the story together.  Each of the chapter headings will have three cards associated with it, and you have to get them in the right order.  There are some clues both in the artwork on the cards as well as in the audio clips to help you figure out which cards go before or after which other ones.

When you think that you have a chapter complete – that is starting with the chapter header and then having the three cards after it in the right order, you can try to solve the chapter.  In the app, you click on the Solve button, and then scan the header and cards in order, and then the app will tell you if you are right or not.  Depending on the difficulty level you choose, it might simply give you a yes or no answer, or it might tell you how many cards you have correct.   If you are correct, you will get a chance to hear the entire chapter in one interrupted sound bite – and it’s important to listen carefully as there is usually extra information included in the full chapter clip – and this will provide important information in piecing together the entire story.

When you have completed the first three chapters, you will then get out the second set of nine cards and then attempt to put them in the right order with the correct chapter headers, again solving it with the app.  When you have all 6 chapters complete – you’re not quite done!  Now, you must place the 6 chapters in the correct order to complete you task.

When you have accomplished the final ordering of the chapters, you do not have to listen to the entire story, but instead you get a nice epilogue which ties the whole story together and fills in some of the gaps not necessarily evident from the snippets.

It takes about 40-60 minutes to “solve” the puzzle, and I expect it would take an additional ten to fifteen minutes if you played with the difficult variant where all the cards start on the table at once.  We used a bluetooth speaker to play the audio, and we found this to be very helpful as our individual phones are not always loud enough for everyone to hear the story. 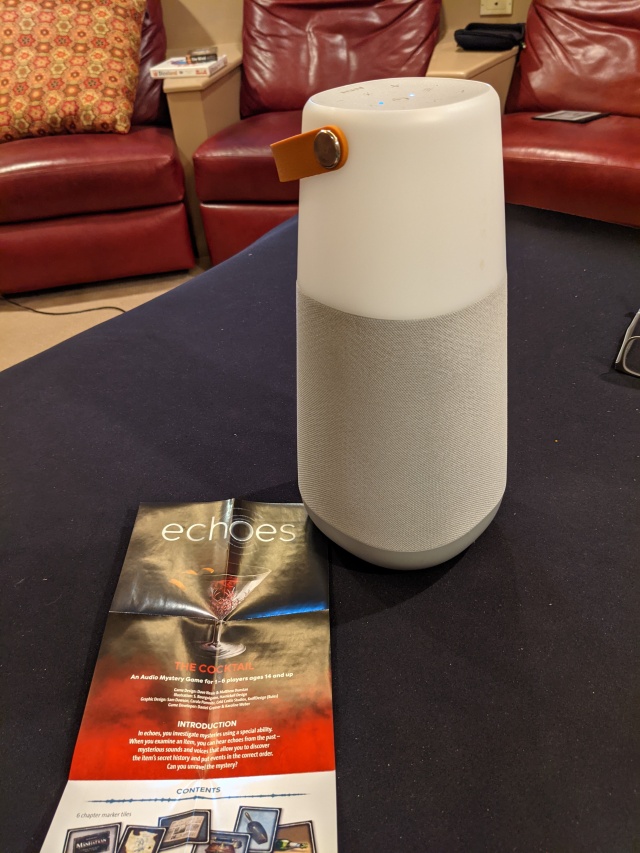 The audio acting and Foley sounds are well done, and I thought the story construction was good.  It was a fun challenge to piece together the bits in the right order, and we had a good time discussing the options around the table as we dragged cards here and there trying to get them right.

We played with the basic level of difficulty, and in retrospect, I think I will play future Echoes games on the difficulty setting.  We managed to get 5 of the 6 chapters correct on the first try, and on that one imperfect one, we had the right cards in the chapter, but in the wrong order.

As with most puzzle games, this game really can only be played once – once you know the story, I doubt you’ll forget it, and that makes it really impossible to be challenged again if you try to play again.  On the bright side, none of the components are damaged during play, so you can pass the game along when you are done, or maybe trade it for something else!

So far there are two episodes in the series, the Cocktail and the Dancer. After playing this first one, I’m interested in giving the other one a try.  Whether or not it is defined as a game is immaterial to me, it’s a good hour of entertainment, and these days, I can use all the entertainment I can get.

James Nathan: I enjoyed this, though I imagine it may ultimately be for the novelty of it. This sort of audio puzzle is a rarity in puzzle games and escape rooms, so it’s exciting to use some different synapses to find the solution. That said, I’ll be interested to see where the series goes – will there be a way to work in….something unexpected?