Normally, when I see that Stefan Feld has designed a game, I immediately think of the words “Point Salad” (yummy yummy).  I was pleasantly surprised to learn that this newest game from Feld is nothing of the sort.  Instead, it is a game about card placement and manipulation.  According to wikipedia – Kokopelli (/ˌkoʊkoʊˈpɛliː/) is a fertility deity, usually depicted as a humpbacked flute player (often with feathers or antenna-like protrusions on his head), who is venerated by some Native American cultures in the Southwestern United States.

In this game, each player has their own village – designated by a player board with 4 spots on it – and each has their own deck of cards.  This deck is changed each game – as 10 of the 16 possible ceremonies are chosen for any particular game (leading to 8,008 different possible combinations), and only the cards for the chosen ceremonies along with 6 wild Kokopelli cards are used to form the deck for any given game.  Each of the ceremonies has a special effect associated with it, and each player will get the special abilities of any ceremonies that are open in play on his own village board.  One of the interesting thing is that you can reach past your own board, and you are allowed to play on the two closest spaces of each neighboring opponent’s village.

The game is played over a series of rounds until either 9 ceremonies are exhausted or at least one player has exhausted their 36 card deck.  In each round, the active player gets 2 actions, which can be chosen freely from 5 options. You can do the same action twice if you want. 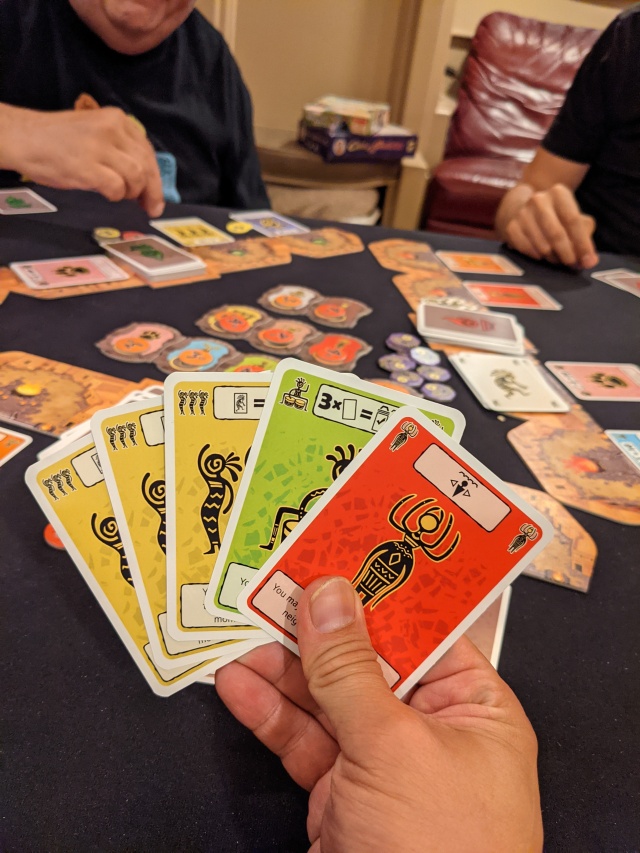 3] Play a card – play a ceremony card from your hand to an opened matching Ceremony that you can reach.  You can also play a Kokopelli card as a wild card, this matches any previously played card.  You can play on any ceremony in your play area (your own board or the two closest spaces of your neighbors).  If you play the 2nd or 3rd card in that stack, you are extending the ceremony – but if you play the 4th card, you finish the ceremony.  The player who plays that 4th card takes the 4VP tile for this particular ceremony; if the 4VP is gone, then take the 3VP tile and put the Game End Marker on the ceremony.  If the Game End marker is there, then you only get 1VP for closing the ceremony.  The owner of the ceremony takes the four cards and puts them on the discard pile in any order they like, and if they were not the player to close the ceremony, they get 1VP.  Note that since you can no longer see said ceremony, the owner loses whatever special ability existed from it.

4] Cancel celebration – you can simply discard all the cards in any one ceremony on their village board.  Again, you lose any special ability associated with that ceremony

5] Exchange cards – discard all of your hand cards, putting them under your drawpile in the order of your choosing, and then draw the same number of cards from the top

Examples of some of the ceremony powers are:

Paw – When you play a card to an opponent’s ceremony, gain 1VP

Drummer – Your ceremonies are completed with only 3 cards

Sun – You may open a fifth ceremony

After the two actions are complete, any cards in your hand in excess of 5 are placed on the bottom of their draw pile.  If you manage to completely play your hand out, you immediately score 1 VP and draw 3 cards (this does not cost an action). 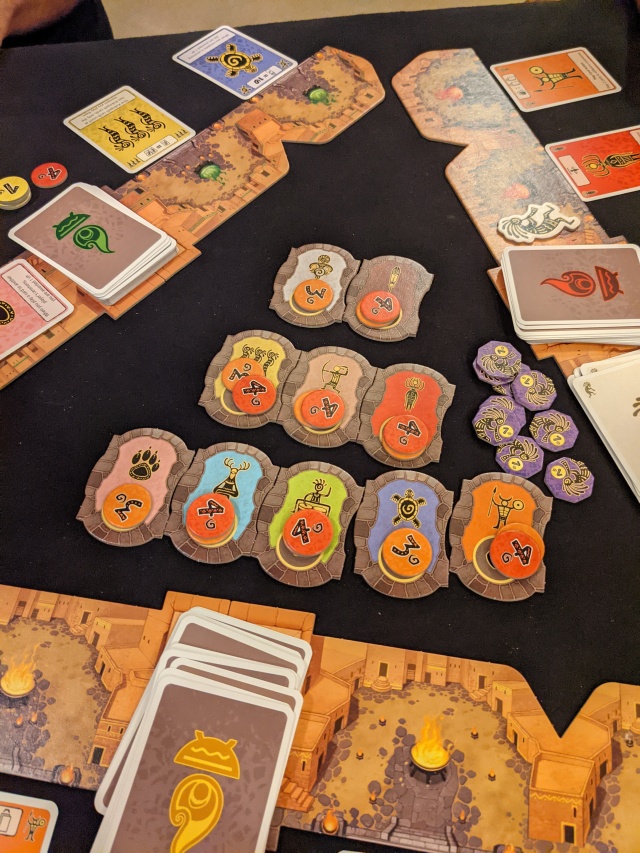 Again, the game ends when either 9 ceremonies are fully closed (2+ finished of each) or when a player exhausts their draw pile.   There is a bit of endgame scoring.  First all players put their hands into the discard pile and then count the cards left in their deck.  The player(s) with the fewest cards score 5VP, second least scores 3VP.  Then, each player scores 1VP for each ceremony on their own board (regardless of the number of cards in it).

The player with the most points wins.  There is no tie breaker.

Kokopelli is an interesting game where you have to roll with the punches, changing your strategy to match the ever-changing landscape of card abilities, both for yourself and your opponents.  In my first set of games, I’ve played with all of the base ceremonies at least once, and each adds an interesting twist to the game. Some of the actions give you flexibility (more cards or more actions), some reward you with points, and some make it easier for you to close ceremonies.

There is a nice balance of trying to play the cards you want as your own ceremonies while keeping enough cards in reserve to close out a ceremony; thus getting the larger VP bonuses for doing that.  Once you have ceremonies in front of you, then you also have to decide about trying to keep them (and thus keeping their special action) or closing them out to gain the points.  You’ll also want to know what ceremonies are on your neighbor’s boards – not only because you can play there, but also because you might want to try to hasten the completion of them in order to remove an ability.

Each game is different due to the relatively unique mixture of ceremony cards you get in each game, and I would recommend taking a minute or two at the start of the game to see what combos you want to try to set up (or avoid in your opponent’s).  Sure, a lot still depends on luck of the draw; so maybe you want to wait and see what your initial hand is before deciding on initial strategy – but as everyone has an identical deck, all of the ceremonies will eventually come into your hand… so you need to be ready for them (or be prepared to discard them to the bottom of your deck and draw new cards).

The overall feeling of the game is light, though it does take a few games to get used to what the different ceremony abilities are.  It’s generally pretty easy to see what icons are on the cards of your opponents, but even now, I probably make a play or two that I wouldn’t have done if I had remembered that John was going to gain a VP for every card I played on his board, etc.

The artwork is thematic, and I have no problem with the clarity.  A few of the ceremony colors are close in shading, but with the big icons, it’s no problem telling things apart.  The cards have held up to our initial plays without any issue.

Kokopelli is a game on the lighter side that will challenge you to manage your hand, play your cards wisely and adapt to the ever-changing rules for each player.  A full game can be had in 30-40 minutes, and the base rules are simple enough to teach in just a few minutes.  It is definitely near the low end of the complexity spectrum for a Feld game, but it’s nice to see the versatility in design showing that not all Feld games need to be point salads.

I’ve enjoyed my games of this and I agree that a game comes down to about 40 minutes once you’ve played it a few times. I often play with a different group and so my experience is that it takes probably closer to an hour for the first game. Also, depending on the experience of the gamers playing, you might need to explain the potential of the combinations so I’d also recommend going with the suggested powers to play your first game.