Hero Hockey is the newest iteration of Klask, a game I first discovered in 2016.  Since that time, there have been a couple of different forms of the game, but the click-clack of the Klask booth has been a mainstay of my SPIEL trips (well, when I used to go to SPIEL).

This newest version converts the simulated sport for soccer to hockey.  Each player gets their own hero which kinda looks like a gavel as there is a dowel sticking out of the side of the hero – representing the hockey stick. 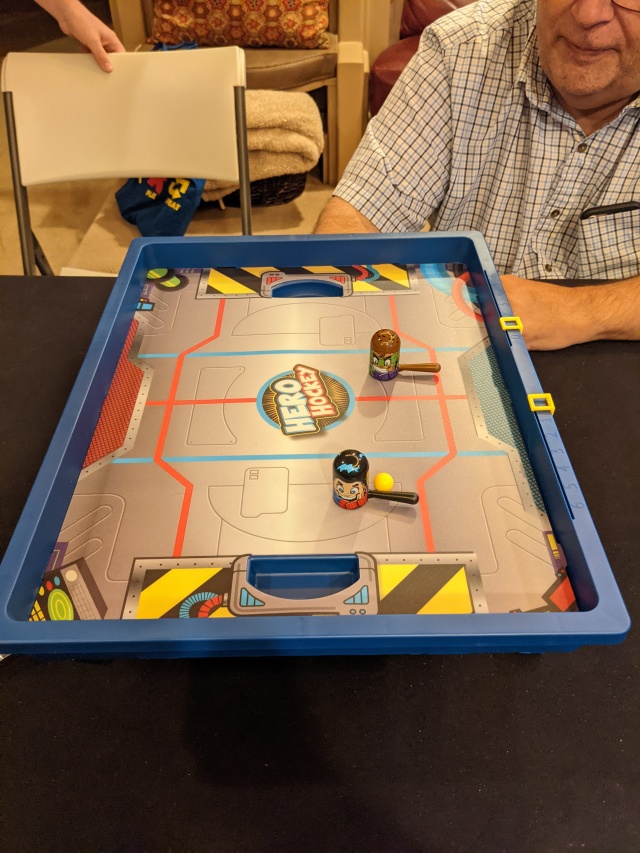 The game is a magnetic dexterity game with players controlling their pusher with a handle underneath the board.  Strong magnets keep the two pieces in connection.   At first glance, this game is reminiscent of Weykick – but it is smaller in size and has a few other features that make it a different game indeed.

The game is a race to six points.  At its core, it’s like a table top hockey game.  Each player has a single pusher which is controlled by a magnetically attached handle underneath the board.  Each player defends a round goal.  The plastic ball is pushed around the board using the pushers – either the body or the stick.  Due to a piece which spans the center line, you cannot move your magnetic controller onto the other side of the board. 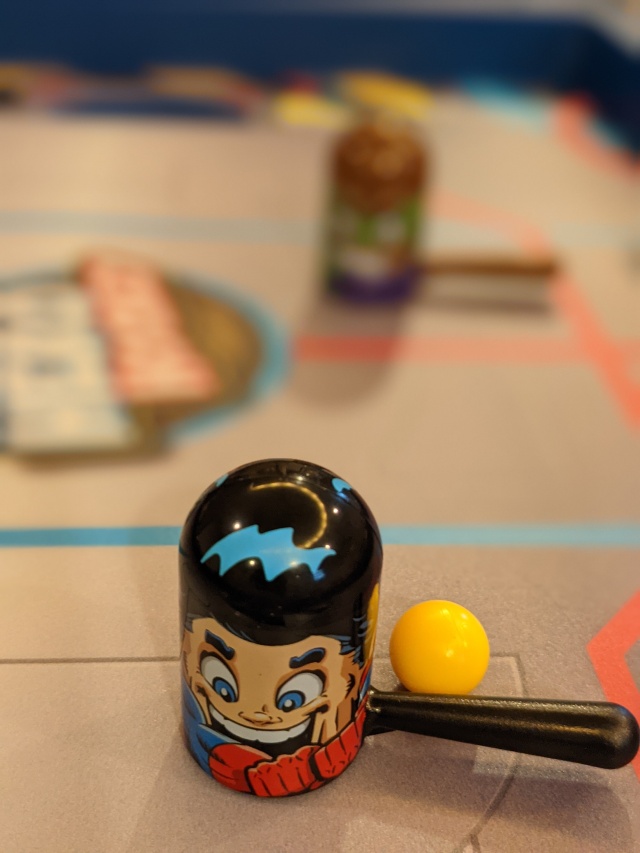 One player is chosen to start the game.  He moves the ball into one of the corners of his side of the board and hits the ball into play.  Play then continues until someone scores a point.

There are three ways to score a point in the game:

The most obvious way is to hit the ball into your opponent’s circular goal.  If you do this, you score a point.

If you somehow get your own pusher to fall into your own goal, play stops and your opponent scores a point.

If your pusher and controlled become magnetically detached (usually from a violently fast motion), play stops and your opponent scores a point.

After a point is scored, the player who did NOT score takes the ball on their side of the court and restarts play.  The game is a race to six points.

While the game looks like the original Klask – there are a few important differences.  First, the size of the goal in Hero Hockey is much larger.  This means there is a lot more space to defend, and the goals come at a quicker pace.  Second, the addition of the hockey stick adds a rotational possibility to your moves.  In the original form, the blocker just looked like a giant Sorry pawn.  Now with the stick, if you can figure out how to twirl the magnetic mover underneath, you can generate a fairly forceful slapshot!  Finally, Klask employed three small magnetic blockers to generally get in the way – these are simply not found in this version of the game.

The play is addictive, and I’ve found that we often want to play multiple games in a row.   I’ve shown this to different family members and school groups, and really kids of all ages readily picked up the game and were ready to play in seconds.  It maybe takes a few points to learn how hard you can move the magnet underneath the board (to not lose control of the hero on top) – but other than that, there isn’t a lot to figure out here, just grab the magnet and go!

The components here are made for the mass market.  Instead of the sleek light wood of the original, the basin and legs here are made from plastic.  One by-product of the plastic components is that the entire game is quite light.  We have found that players often want to hold onto the base of the game with their off-hand in order to stabilize the whole thing on the table.   The ostensible advantage of the plastic is that the MSRP is quite reasonable, currently listed at $29.95 on the Asmodee NA website.

I loved Klask, and I think that this version is a great way to bring the game to a larger audience.  I figure this will be a hit in the mass market stores this holiday season, and I would recommend it for kids of all ages (as well as some adults who act like kids).