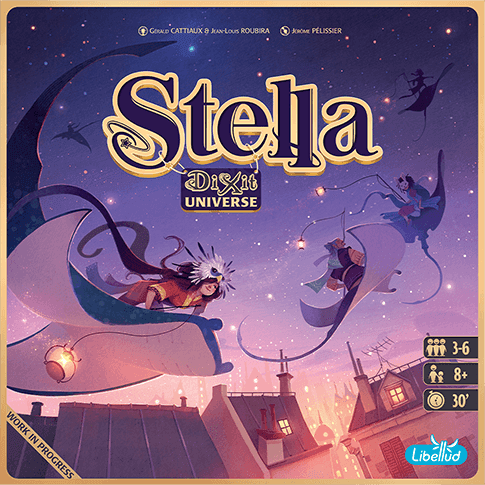 Stella is the newest game set in the Dixit universe; all games that require players to examine exquisitely illustrated cards and find common themes to match the other players.  To start, I should probably make clear that I haven’t been the biggest fan of Dixit games in the past – as many of them have felt more like activities rather than games.  My viewpoint may be unpopular, as the original game is a deserving winner of the 2010 Spiel Des Jahres, so there are plenty more people that feel opposite me…

In this game, each player gets their own player board and a marker.  The board shows a diagram of what you will set up on the table – a little scoreboard next to a 3×5 array of large picture cards, dealt from a deck of 84 cards.  FWIW, the cards have the Dixit logo on the back, and you can freely exchange these cards with any other Dixit cards you happen to have lying around. 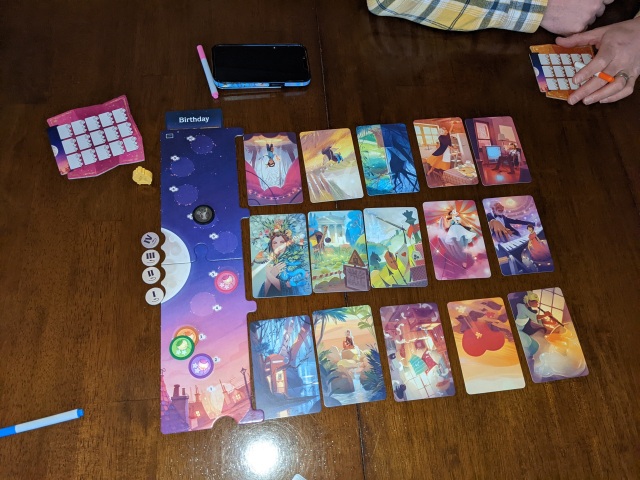 One player is given the start token, and that player draws a word card and places it near the top of the scoreboard.  The term shown is the Clue Word for the round.  Now, all players take their time to examine the 15 pictures on the table, and mark an “X” on their player board corresponding to the locations of cards the player associated with the Clue Word.  You must mark at least one picture and no more than 10.  Like most other picture association games (and Dixit games), there aren’t many guidelines as to how you would associate the pictures to the Clue Word… If you think they’re related – for whatever reason – mark an X on your board.   Each player board has an outline of the scoreboard on it; hold your board to match the orientation of how you see the table to ensure you are marking the right spots! 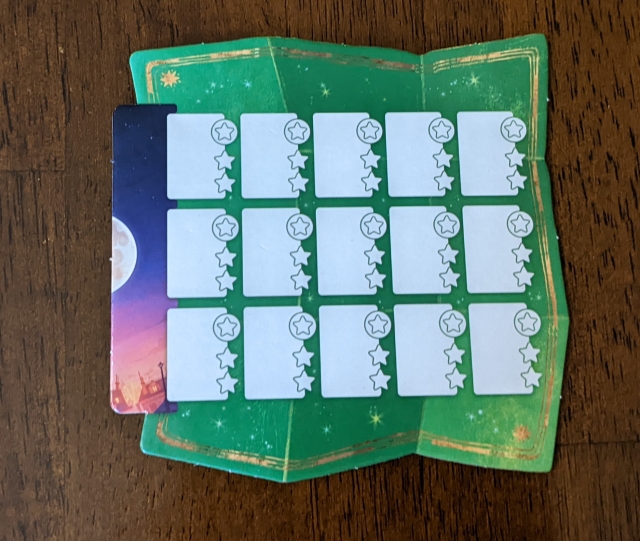 Once all players have finished making their choices (our group chooses to lay their board facedown on the table to show they are done) – all players then announce – but DO NOT show – the number of marks made on their board.  Each player moves their colored scoring piece onto their number of marks.  Pay attention to the most marks; if there is a single player who has marked more pictures than anyone else, turn their scoring marker over to the darker side.  Otherwise, all tokens remain on their light side.  This will come important when it’s time to score.

To determine the scoring, players now compare their answers.  Starting with the player with the starting token, players will point at one of the pictures that was marked on their board.  All other players then announce whether they have also chosen this picture.  As long as one other player has chosen it, it is a successful turn.  If only one other player also chose the picture, those two players color in all 3 stars next to that picture on their board.  If there are 3 or more players who have chosen the picture, all those players color in just 2 stars next to the picture.  If no other player has chosen the picture, the current player has failed; and they can score no further points this round.  They must still participate in the round, as their other picture selections might still help others score points.

The next player clockwise then chooses any picture marked on their board which has not already been chosen and repeats the above process.  If all of your marks have already been chosen, you simply pass.  If you have failed earlier in the round, you also do not get to nominate any further answers.  Continue until all players have had a chance to nominate all the pictures marked on their boards.

Now it’s time to score.  For everyone with a score marker on the light side (that is, everyone except for a possible single player who guessed more pictures than anyone else), simply count up the stars colored in next to your answers; record this score on the scoreboard.  If there is a Dark side marker, consider whether that person failed or not this round.  If that player failed, subtract one star from each picture that had stars colored in.  If that player did not fail, there is no penalty. 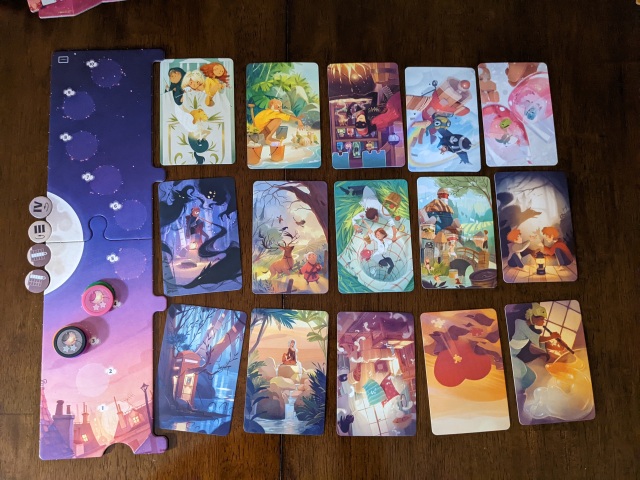 You will now set up the board for the next round by replacing one of the rows of picture cards with fresh ones from the deck. Rotate the start player marker, draw another Clue Word card from the deck and continue on.  Do this for four rounds.  At the end of the fourth round, the player with the most points is the winner.  There are no tiebreakers. 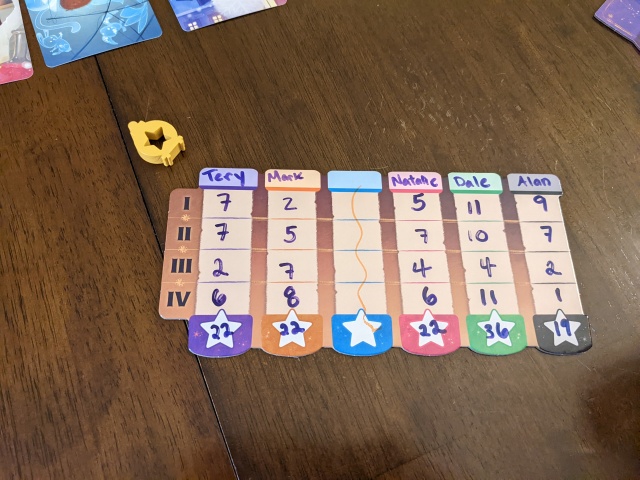 Well, here I am writing a review of Stella, only 2 weeks after receiving it, and having no less than 5 plays under my belt.  Based on my previous history with the series, that is probably a record for both number of plays and frequency of plays.  Stella has been a surprising hit, going over well with both my family as well as late night plays at a recent convention I attended.

Here, as there is no “judge”, it feels more like a game.  You really need to try to match the answers of your fellow players, and there is a bit of skill here – more so than what I feel there is in Dixit.  Additionally, there is a bit of skill/gamesmanship at the higher end of the scoreboard.  You can choose to pick a lot of pictures in order to maximize the number of chances you have to score; but you risk a painful penalty if you choose the most.  Heck, even if you are picking a more modest number of pictures, you might have to decide how many you want to mark in order to ensure that you don’t have the most. 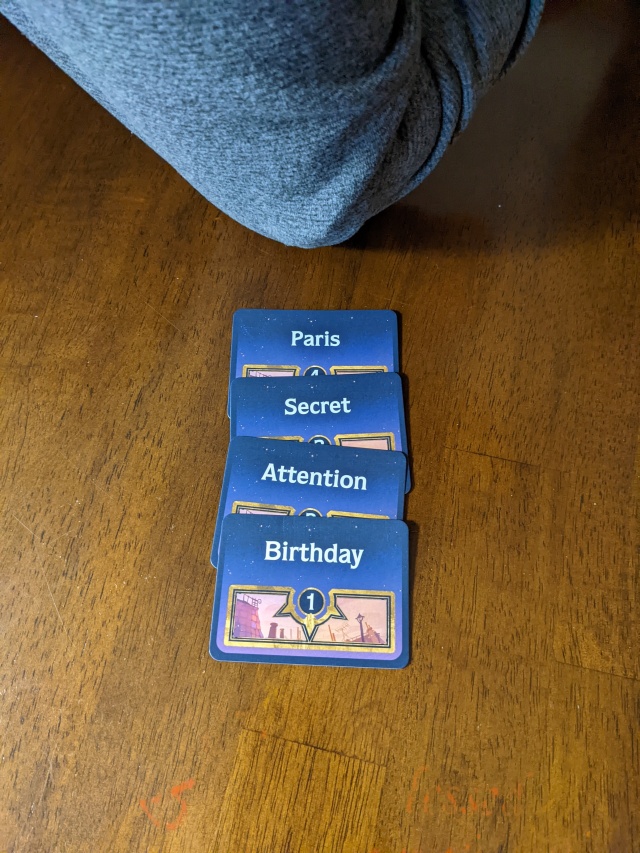 As with other Dixit games, the artwork is amazing, and I really like the fact that the cards are interchangeable with the other games in the Dixit Universe.  A few of my games were played in a room with poor lighting – and in this instance, it can be hard to have 6 people crowding around the table trying to examine the pictures, and it is kind of a giveaway when someone picks up a card to look at it closer.  We found a pretty elegant solution was to have people take a picture of the table with their phones and then they could look and zoom on their own private screen.

Games move fairly fast, and it is super easy to learn.  The scoring rules concerning the leader can trip up some non-gamers, but overall, it’s a good choice for just about any group.  While it still feels a lot like an activity, I think I can safely say that there is a game here, definitely more so than other games in the Dixit Universe.  As I mentioned earlier, I’ve already played it 5 times, and that alone should say something about how I feel about the game.  This sort of thing would likely never be requested at my weekly game session; but for holidays and social gatherings (as well as conventions), it’s a great choice I think…

Tery N: I am not really a Dixit fan. I can appreciate why others like it, and the cards are gorgeous, but it just doesn’t feel like a game to me; like Dale, I see it as an activity, and one that quickly wears on me.  I was not super excited to try Stella, but in the excitement of being with other gamers and playing an in-person game I agreed to it. It turns out to be much better than I expected. It feels much more like a game than Dixit does due to the structure and scoring.  I like that I am not trying to pick one card from someone’s phrase that may or may not make sense to me; since we have one word and are looking at the same cards it seems less arbitrary, and there is strategy to what match you reveal and when.

Dan B. (1 play): I like Dixit. This game doesn’t feel like Dixit to me; that’s bad in that I miss the creative aspect of Dixit, but good in that it’s faster and more accessible, since obviously there are people who don’t care for that aspect of Dixit but will play this. So, a perfectly fine game of its type, but not a Dixit replacement.