Micro Macro was one of my hits of 2021, and it was well acclaimed by others as it won the 2021 Spiel des Jahres.  The game was quite a success, and Pegasus is reporting worldwide sales in excess of 500,000 copies thus far.  Given those numbers, it is not surprising that a sequel was quickly put out; and I was thrilled to get a copy of it to play.

In this game, you get a map of Crime City, a city where crime lurks around every corner. Disastrous secrets, devious robberies and cold-blooded murders are the order of the day here. The local police are no longer able to control the situation. Therefore, the work of clever investigators is required.  Players solve 16 tricky criminal cases by determining motives, finding evidence and convicting the perpetrators. An attentive eye is just as important as a deductive talent in order to unravel everything on the 75 x 110 cm large game board. A magnifying glass is included in the game to help with finding every detail.  In this inventive game, the board is a paper fold-out map that takes up most of your table. It is a black and white line drawing affair with plenty of detail.  Depicted on the map is a snapshot of life in Crime City – you can see the people, buildings, vehicles, etc all drawn out in fine detail 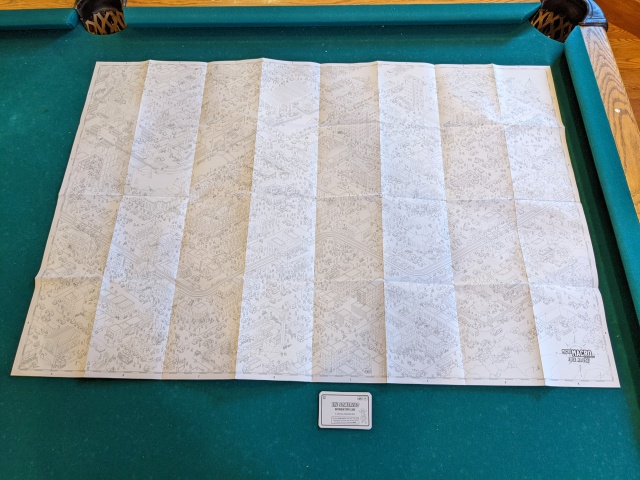 So, as the rules go – you start by opening up a case envelope and reading the first card (the one with the black background).  You get a little bit of background information on the case, and then you move onto the next card.  The front of the next card will tell you the first thing that you are looking for – giving you some clues where to look…. I.e. in the southwest corner of the city, near the water, close to city hall, etc.  You scan the map and try to find whatever the card is sending you to look at.  When you think you have found it, you flip over the card where you will see the target illustration (often with map coordinates) so you can confirm that you found the right thing.  Then… off to the next card, and back to the map.  When you have completed all of the cards, you’ll have unraveled the mystery and now you know how/why/where the crime was committed.  Time to repack the cards into the wax paper envelope and off to the next case!

The rules do suggest a variant – once you are familiar with the format of the cases, expert solvers are challenged to try to read only the first introductory card, and then only using their observational skills to completely reconstruct the case using the map alone and NOT reading the other cards.  This approach clearly raises the level of difficulty, and we found this approach much more appealing to keep us interested.  When you think you have completed the case (or when you get stuck), you can refer to the cards more as hints to see how far you’ve gotten on your own, and then resuming the search with the additional information as needed from the cards. 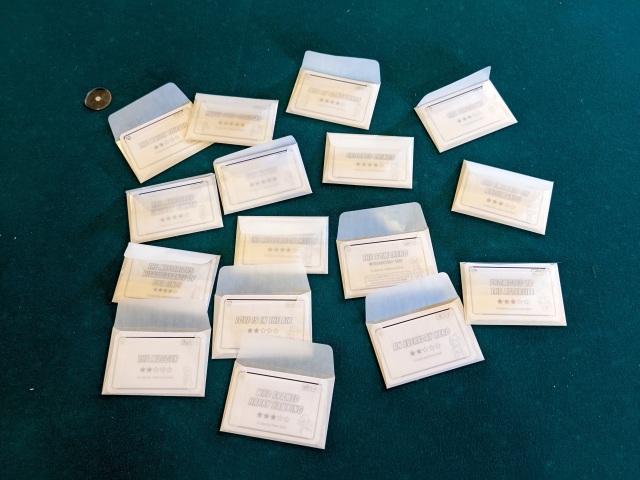 I’d definitely recommend playing the first 2-3 cases “by the rules” if nothing else to show you what sorts of tricks they use to clue in the story; it would be brutally difficult to try to do it on your own without some guidance on what to look for! 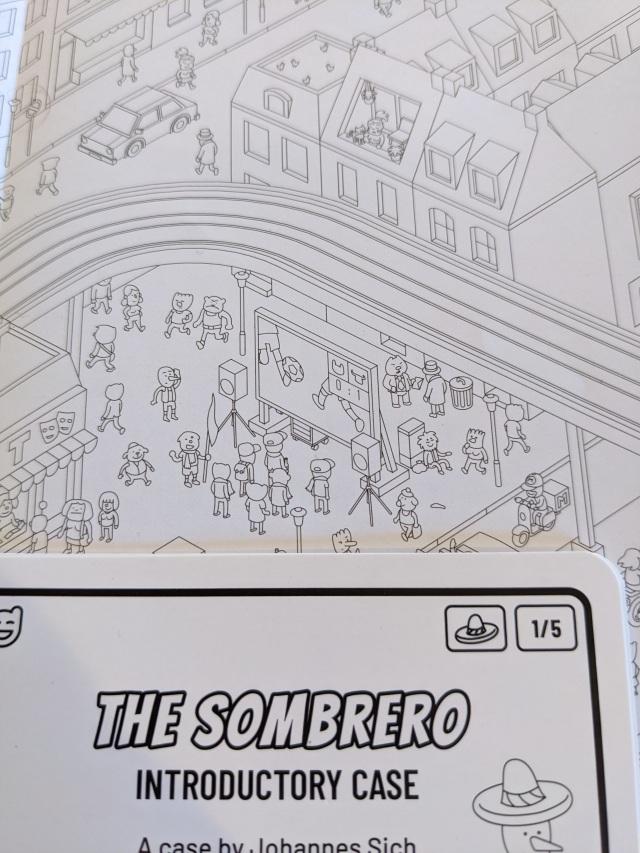 Also, depending on your skill, you may want to have some things available to mark down suspects or other interesting things.  There is a lot of detail on the map, and sometimes you want to track certain people or remember where a particular thingamajig is.  I have kept a cup of colored acrylic discs (bingo chips) next to the map to help me remember and then later find whatever it was I was interested in.

The cases are organized in ascending order of difficulty – ratings from one to five stars.  The introductory, one star and two star cases are ridiculously easy.  And I just wanted to mention this fact so that you don’t get discouraged or give up on the game because of it.  Those cases are easy, but again, I think that they serve a useful role in teaching you how the game works and what tricks the designer has employed to tell you a story using only a static 2d black and white drawing.  The later cases are much more complex and involved, but they would be hard to do well without these easier building blocks. 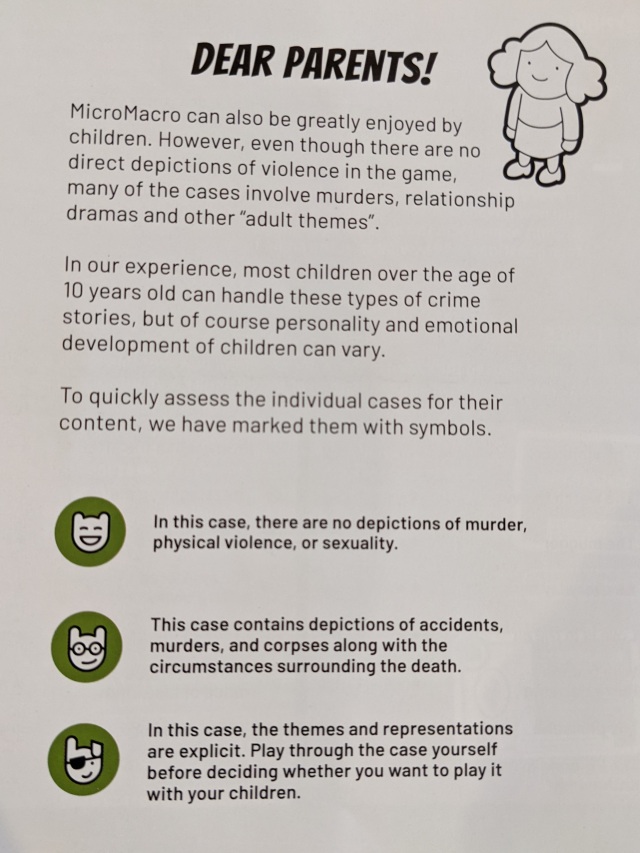 Additionally, there are icons on the cases to alert you to the subject matter.  One of the complaints of the original game is that a few of the cases were maybe not suitable for children; and this new version helps you decide whether or not the subject matter is appropriate for your younger detectives.  (I have also read that the reprint of the original will also include these icons…)

Though I have not yet completed the full roster of cases, I think I still have 4 to do – I felt I had played enough to write the review having spent about 3 or 4 hours playing it thus far.  In the end, it’s more of the same – which is awesome.  You get sixteen more cases, and based on size of the board, I’m sure there are already plans for expansions and promos to give you a few more cases with the map provided in the box.

If you liked the original, you will certainly like this followup effort.  If you are new to the system, you can start with either Micro Macro or Micro Macro 2, and I would definitely recommend either to a newbie.

The only downside I can see about the game is that the cases are generally only able to be played once; so once you finish the cases, there’s not a lot left for you to do but pass the game onto someone else to enjoy!  To test this, I did pull out a copy of Micro Macro (1) and tried the first two cases; I remembered enough of the details to prove that after a year, there still wasn’t enough mystery to replay a case…

Dale Yu is the Editor of the Opinionated Gamers. He can occasionally be found working as a volunteer administrator for BoardGameGeek, and he previously wrote for BoardGame News.
View all posts by Dale Yu →
This entry was posted in Essen 2021. Bookmark the permalink.