Well, we’re about the head into the summer convention season, and Origins has moved back to its mostly traditional spot at the opening of summer…

Held each year in the Columbus, Ohio Convention Center – this show has been one that I have generally made the start of my gaming summer.  The OG will be represented by some of our writers (and we’ll hopefully get reports from them during the show) – but prior to the show, I’ve been keeping an eye out for some of the new games to be seen there.

Akropolis (Gigamic) – Gigamic is a company best known for wooden abstracts and family games, but they appear to be making a move back into the adult strategy titles.  This is a tile placement game that has three simple steps:

OK, there’s probably more to it than that, but that’s what I’ve read so far. And I like tile games and pattern matching.

Amygdala (Game Brewer) – I mean it’s probably enough to just say that this is a new release from Kramer and Kiesling.  That sentence alone is enough to have me look at it.  In this abstract strategy game, players vie for control of different regions, each associated with an emotion. They must collect and store emotional resources in their memory bank which they will use to unlock emotions from their mind, then place these emotion tiles on the main game board. Emotion tiles can be connected in networks of like emotions to score points. The player with the most emotions in each region can score big points at the end of the game, but only if they manage to unlock and place a claim tile belonging to the region they wish to score.  Sounds interesting, and again, until proven otherwise, a K+K game is pretty much a must-see for me. 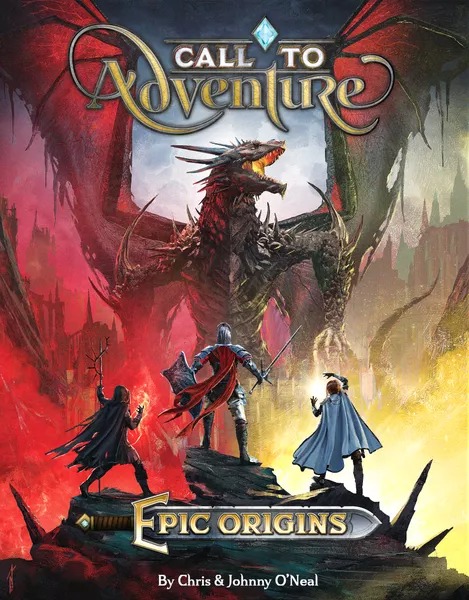 Call to Adventure: Epic Origins (Brotherwise) – I liked the original game, Call to Adventure, and for players familiar with Call To Adventure game system, Epic Origins introduces a high fantasy theme inspired by classic dungeon-crawling RPGs. The new Heritage card type provides options like Elf, Halfling, and Dwarf. Class cards allow you to invest Experience to “level up” your character. High fantasy themes and challenges can be found throughout the game’s 150+ unique cards. This game also features overhauled Solo and Co-Op play. Double-sided Adversaries provide an evolving challenge.  I’m defintiely interested to see how the Brotherwise folks have furthered the game system with this newest release. 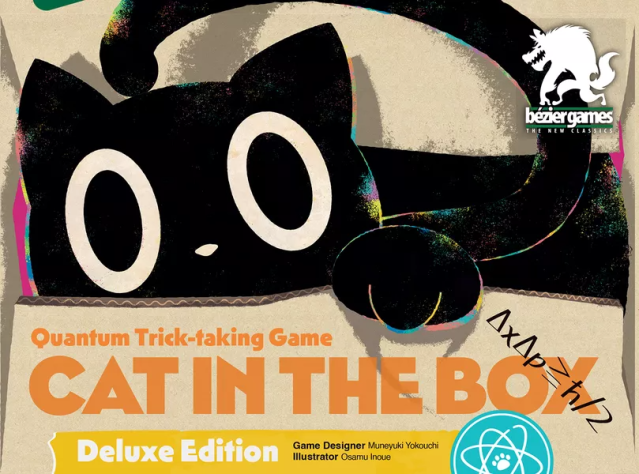 Cat in the Box (Bezier) – This is the English language version of a Japanese trick taking game that I’ve enjoyed for quite a while now.  This new version has nice inset boards to hold the bits.  It’s a trick taking game, with a nice twist – you play a card and get to decide what suit it is!  Yeah, it’s a lot to wrap your head around, and I hope that the new English version is able to gain a new audience for this great game.

Distilled (Paverson) – Distilled is a highly thematic strategy card game about crafting spirits in a distillery, with resource management and push-your-luck elements. In the game, you have inherited a distillery, and are hoping to someday achieve the title of master distiller through purchasing goods, building up your distillery, and creating the world’s most renowned spirits.  Use cards to purchase new ingredients and invest in upgrades to your distillery, all while eventually distilling the spirit and sending it to the warehouse. Once in the warehouse, age your spirit to enhance its flavor and bottle it to sell it for major profits!  The artwork that I’ve seen so far looks great, and I’d not be against a great game to sip some whisky while playing….

Ferret Out (R&R) – I got a chance to play a version of this at the Gathering of Friends, and it was a great party game – a niche that R&R Games is good at filling.  Ferret Out is a social deduction party game where players try to uncover the lone weasel mingling among ferrets. The unique feature of the game is that no one knows who they are – Not even the lone weasel.  Everyone has a card with a hidden word. All players have the exact same word except one player (the weasel). To Ferret Out the weasel, every player provides a clue to their word. The goal is to read all the clues, and determine which player gave a clue that does not match the others (the weasel).  Players earn points for correctly identifying the weasel. BUT weasels are clever critters, so all players must be careful when providing clues to their hidden word. Because if the weasel can deduce the ferrets’ hidden word (by connecting the clues) the weasel will earn bonus points.  This game is like a combo of Just One and Spyfall.  If your group likes those, this will be definitely worth a look.

Foundations of Rome (Arcane Wonders) –  The city-building board game Foundations of Rome puts you into the role of an architect competing to own land and build magnificent structures!  Build domūs and insulae, fountains, foundries, and more to increase your renown – gaining glory for yourself and the empire! With 96 wonderfully detailed miniatures in the base game, Foundations of Rome is a testament to the glory of Rome that you can bring to the table. Foundations of Rome is the next, and biggest game to date from famed designer Emerson Matsuuchi.  I have been a big fan of Matsuuchi’s previous games, and I’m a Roman history buff, so the theme immediately catches my eye.  There has been lots of buzz about this one, some about the game, and some about the $140 price tag.  I’d love to get a glimpse at the game to see if it is worth the price!

Ghosts of Christmas (Boardgametables) – This is the new version of Time Palatrix, another game from Japan that most people have never heard about.  It is part of the newest set of Japanese Games being redone by Boardgametables.com.   As winter blows in and ghosts start to appear, play “tricks” to the past, present, and future.  (That’s right, you play to them simultaneously!)  As turns progress, your foes will play – out of order – to any of these time periods, and you will start to figure out who might “lead” each trick. Even though you can play to the tricks in any order, the tricks will resolve based on who was leading. Can you figure out who will be leading or manipulate the leader to set yourself up to win tricks?  Points are awarded to whomever has correctly bid on the number of tricks they thought they’d win. If you’ve played as many hands as there are players, the game is now over, otherwise keep playing! Whoever has the highest score and collected the most wreaths wins the game!

Holly Jolly (25th Century) – OK, I’m a sucker for Christmas themed games.  That alone is enough to make me look at this one.  The designers (Pinchback and Riddle) have made a number of games in the past few years that I’ve liked, and that also makes me more inclined to give this one a try.  We’ll see if it replaces Christmas Tree as my go-to Xmas game.

Suspects (Hachette) – Suspects is a range of investigation games with streamlined rules and plots centered on the psychology of the characters in the style of Agatha Christie’s novels. This first edition will feature the ingenious and fearless Claire Harper in three stories that pay tribute to the great classics of detective literature!  I’ve enjoyed a lot of the mystery/puzzle/escape room type games in the past few years, and this one will give you 3 detective cases to puzzle through.  It remains to be seen whether or not they are less “read-my-mind-y” than Sherlock Holmes Consulting Detective…  As with most of the genre, this is a play once and move on sort of game because once you’ve solved the mystery, you likely won’t forget the details, and thus you can’t play again. 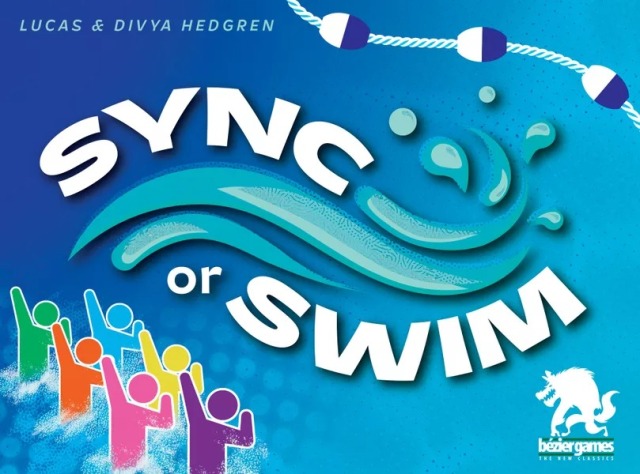 Sync or Swim (Bezier) – Mild disclaimer here – I was once on the development/playtest team for this game, but had to back off due to COVID conflicts.  In any event, I’m really excited about the cooperative game set in the world of synchronized swimming.  I thought it was great in the beginning stages, and it’s been awhile since I’ve played it. I want to see what it has been developed into – and see how the phone app which goes with the game looks.  Oh, and one of the designers (Lucas) is one of our very own contributors here – so congrats to him! 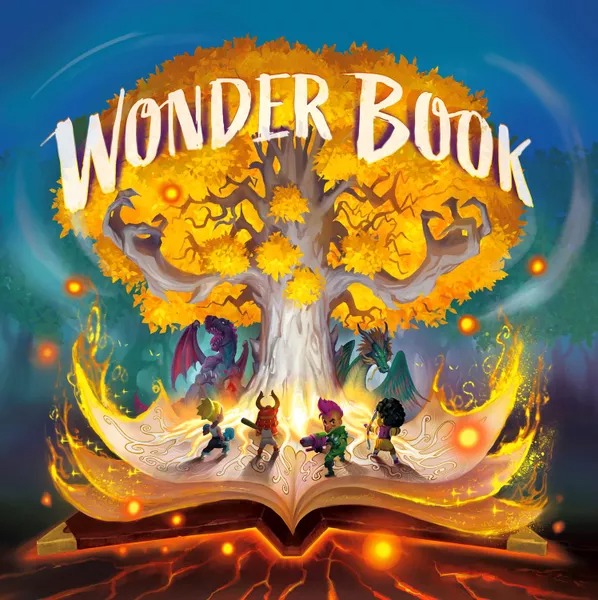 Wonderbook (davinci) – Wonder Book is a pop-up game for 1-4 players in which each player takes the role of a teenage kid in a group of adventurous friends. This is a co-operative game in which you all win or lose as a team.  The game is split into six consecutive scenarios (“chapters”), each composed of a specific deck of pre-sorted cards that contain the rules, the story, and the challenges you have to face. Each chapter has you explore a new part of the interactive 3D cardboard pop-up book and reveals more about the world in which your adventure is set.  From the pictures that I’ve seen of the game, it looks breathtaking, and I am certainly interested to learn more about this one!

I’m sure that there will be other games at the show that catch my eye – but these are the games that I’ll already be wanting to learn more about before the show even starts!  The Origins Game Fair goes from this Thursday thru Sunday in Columbus Ohio.   You can still get a badge online or at the show itself – https://www.originsgamefair.com/get-a-badge