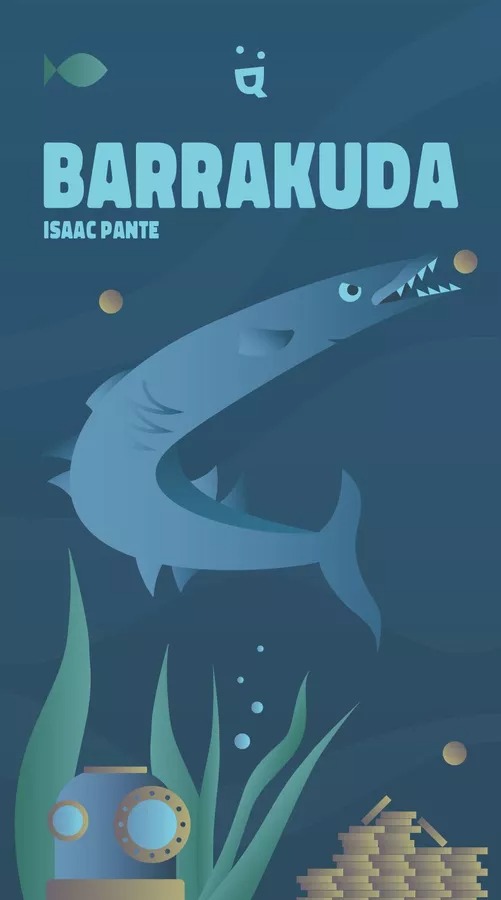 In this game, players find themselves in Cartagena, Colombia, and they will maneuver their way through a path of connected cards on the table trying to discover sunken Spanish treasure… Sound familiar?  In this mini-sized game, the ocean floor is constructed using six out of the twelve available shipwreck cards, set in a pattern so that each card is connected to at least one other card by an adjacent side.  There will always be 6 cards in the game, one of each number 1-6.  There is a second set of treasure cards numbered 1-6, and when you are more experienced, you can swap out some of the starting cards for a more varied board, though you’ll always have 6 cards, and one of each rank.  That being said, even using the same set of 6 cards, games can play out differently if they are arranged differently on the table.

Each player chooses a color, takes their barracuda card, deck of 5 movement cards, money bag card (with 2 gold on it to start) and vault card.  The Barracuda meeple is placed on the treasure card numbered 6.  The goal of the game is to be the first player to collect 8 gold pieces in their vault from the shipwrecks on the ocean floor.

Each round is played in three phases: play cards/move divers, move the barracuda, resolution.

In the first phase, players secretly and simultaneously choose a card from their hand; when all chosen they are revealed.  Numbered cards are placed face up on the table, and player pawns are placed on the matching numbered treasure site.  If you played a Barracuda card, you place your pawn on its side and it does not move.  If you have played all of your movement cards, you get to take them all back.

in the Resolution phase, you go through the shipwreck cards in ascending numerical order. What happens here depends on what pawns are on the card

After all the cards are resolved, the round ends.  If the Barracuda is on Shipwreck 6 OR all Barracuda cards have been played, then all players can retrieve their Barracuda cards.  All pawns are placed upright.  Check to see if anyone has won the game (having 8 gold pieces in their ship vault).  Otherwise, play another round

Barrakuda mixes a few different concepts – pushing your luck, reading the minds of your opponents, and avoiding the sometimes random movement of the Barracuda.  In the basic setup, there is only one card, the 1, where you can bank coins from your bag to your vault.  As the banking action is the special action for the card, you have to have the best initiative when you are on that card to be able to use it.  So… that is the biggest thing in the game; figuring out when to get to the 1 card when you have coins in your bag and you have the initiative to stash your coins.  And then, once you have done it once; you need to do it all again at least once as you can only move a maximum of 7 coins to your vault each time…  All of the other cards are used to gain coins and/or remove cards from your tableau – thus improving your initiative.

The barracuda can be a menace, especially when someone else is specifically controlling it.  Even if you’ve managed to collect a lot of coins in your bag, it only takes one visit from the barracuda to have them all falling to the ocean floor…  ‘

As you are reading the minds of your opponents, you are not only trying to figure out where they are wanting to move their meeple, but also when they are playing their barracuda.  There are a lot of different things to consider when you’re trying to choose your card.  Are you trying to go to a specific space and take the special action?  Then, you want to have the best initiative over the other players you think are going to go there.  Are you trying to block someone else? Then go to their desired space.  Do you want to control the Barracuda?  Make sure that you think no one else is going to play their card, or else all you’ll get is a random dice roll for your efforts this turn.

So far, all of my games have ended up into a back and forth game at the end as one or more players gets to the point where another visit to the “1” card will win it for them.  Then, multiple barracuda attacks ensue, and the darn fish ends up camping out on the 1 card for much of the time.  The players needing the space can try to move it away, but there’s no guarantee that it won’t just be moved back on the next turn!

Despite that, the game still plays quickly, maybe 15 to 20 minutes at most…  Each individual round moves quickly, and this keeps everyone involved as they are constantly making plans and making decisions to further their progress.

The components are cute, and I like the art in the cards.  I assume that the box is a “usual” size, though it seems weird that the top does not sit flush on the bottom (there is about a 1cm gap), and the components do not seem to need the extra height provided by this overlap.  While it does make it easier to take off the box lid, it does make the game 20% taller for no other discernible benefit.

This game is a bit more complex than some of the other Helvetiq family games that we’ve played over the years, but I think that the 8+ recommendation still is a good one.  There may be a few issues remembering the actions of the six different cards in play, but they aren’t that tough and the iconography is pretty good.  For a sea themed night (maybe play this with Deep Sea Adventure) – you could have a night of fun that all fits in a small purse!