Dexterity-based balancing games are a dime a dozen, I’ve got at least a ½ dozen sitting on my shelves at home. (No, I won’t sell them for a nickel.)  There are several good reasons why the genre is so popular.  First, these games tend to have fun little bits and pieces giving the game an excellent game presence on the table, suitable for attracting new players.  Second, these games tend to be very light on rules, so those new players can get up and running right away.  Third, the core of the game revolves around the difficulty of performing a physical action rather than mental acuity. This makes balancing games great for cross-generational gameplay.  Flotsam Float satisfies all three criteria, making for a very colorful and approachable game for a diverse range of ages.

As one might expect, players take turns placing little wooden pieces into a stack, hoping that they do not cause any part of the stack to fall down. The game starts with 7 mountains (cardboard platforms) on the table, each surrounded by 4 island cards that are underneath one of the many assorted tokens. The cardboard “boat” begins on the middle mountain.

On their turn, the active player chooses one of the wooden pieces surrounding the boat and places it on top of the boat. Pieces do not have to be on top of previous pieces and you can even use the currently held piece to adjust other, previously placed pieces, if you desire (and are coordinated enough to do so.)  The newly-uncovered island tile is then flipped over to display two things: one is a group of seashells (typically 2 to 4) which serve as victory points and the other is the symbol of one of the other mountain tiles. The active player must then pick up the boat and move it to the new mountain without dropping any pieces. (If the card indicates the current mountain, the active player can pick a mountain of their choice.) If the move is successful (no pieces drop) the player collects the card and the play passes to the next player. If pieces fall off, the boat continues its movement, the active player gains nothing, and the lost pieces are simply removed from the game. When there’s only one island left with cards around it, the game ends. 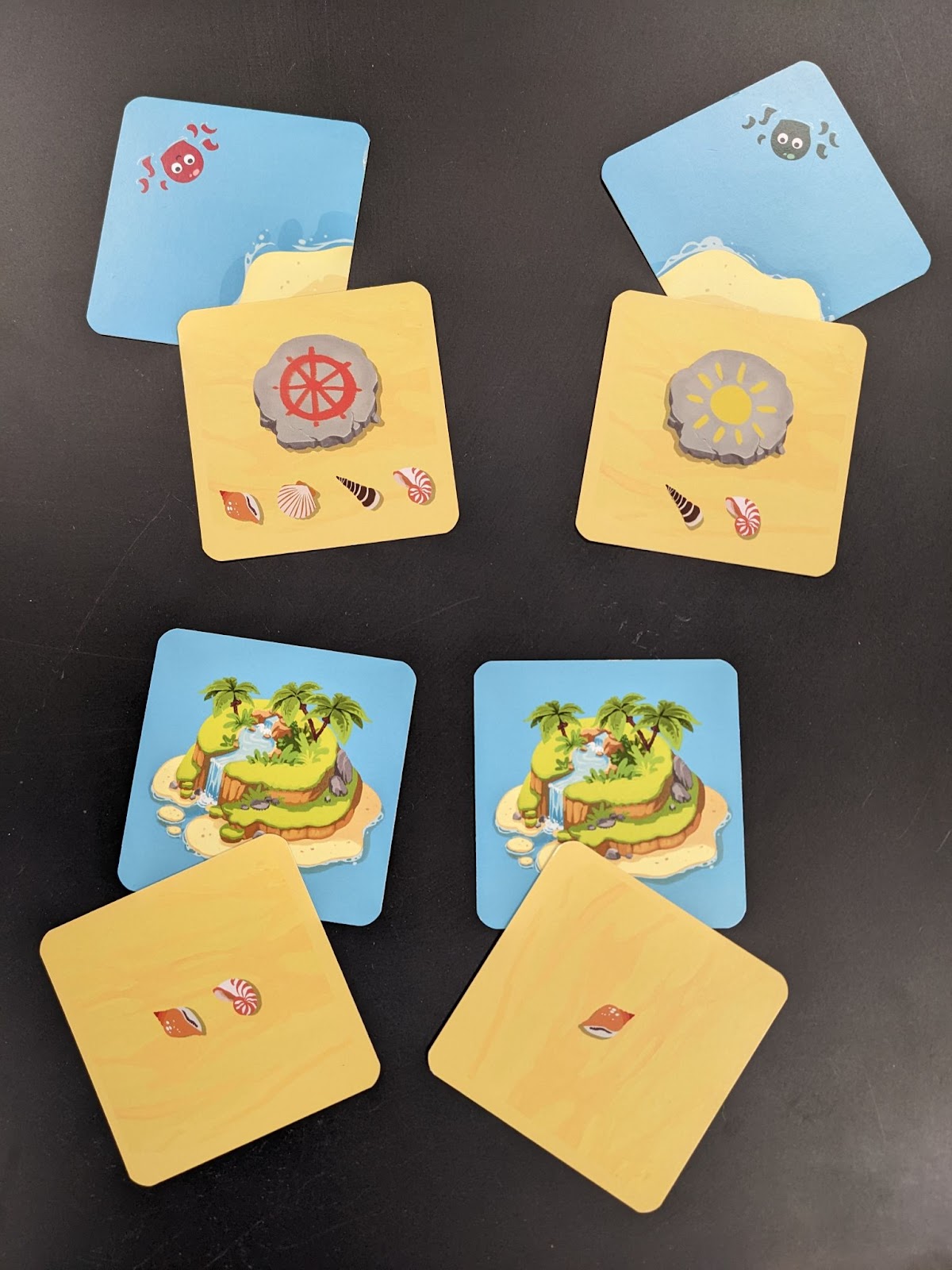 There are two additional special twists during the game. First, if there are at least three pieces on the boat and any part of the most recent piece is higher than all the rest, a successful boat movement provides an additional bonus scoring card (typically 1-3 shells) which is not revealed to the other players. The second “advanced” twist revolves around colored octopi on each island card. The player with the most cards of each colored octopus scores an additional bonus scoring card at the end of the game. This gives just a slight push for players to perhaps choose a non-optimal piece in order to try for most octopi of a specific color.

The interesting or unique feature of Flotsam Float is that players first place their piece, but then have to immediately move the entire stack to a new location. It isn’t enough to just barely balance that one evil piece for the next player. You also have to be able to move the entire stack before it gets to the next player’s turn. This reduces a bit of that screwage-factor and puts even more pressure on the dexterity aspect.

Another thing going for the game is its table presence.  The little islands with widely different bits and pieces scattered around are a great draw. I’ve brought the game out at a few international student boardgame gatherings and seen it occupy groups of 10 or more people for a half an hour. The rules are simple enough to explain and there are just enough bits of rules-flair in there to make it feel like there’s another layer beyond pure dexterity. Giving players a choice of piece to add (when there are extra island cards at your location) lets players decide how much risk they want to take. 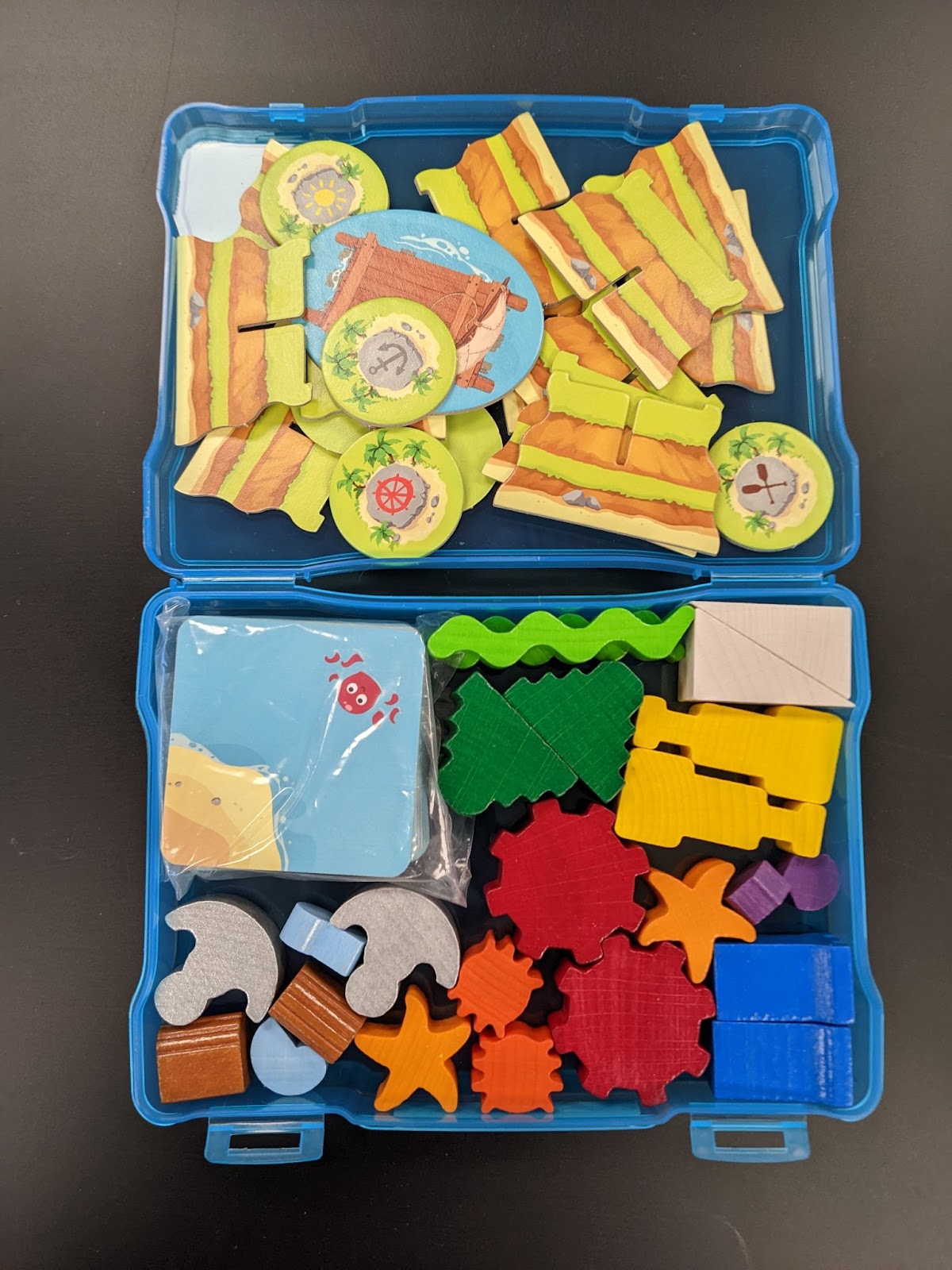 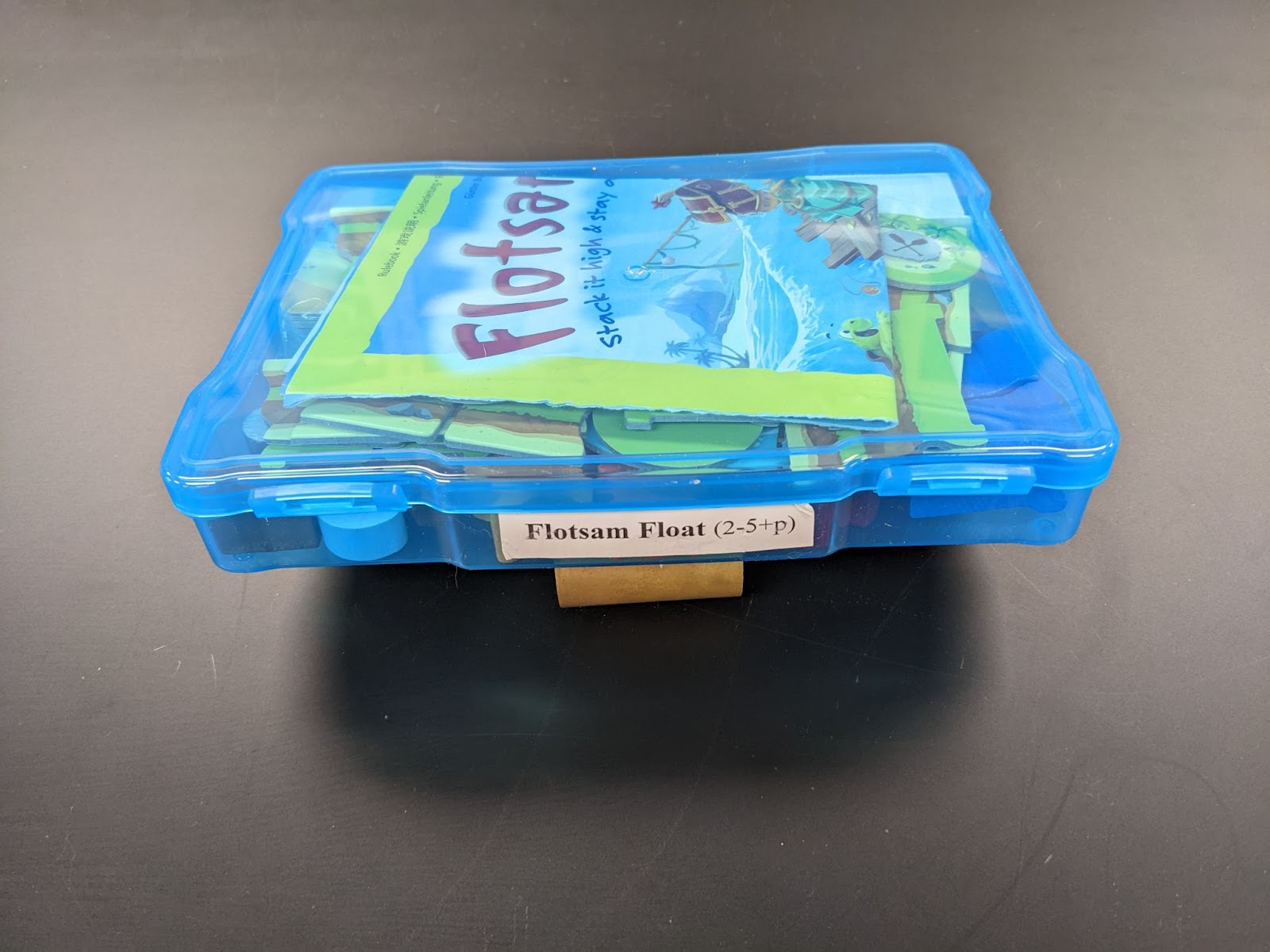 The one strike against the game might be its over-large box. I understand the need to have a specific box size for retail reasons, but it is always unfortunate when my shelf storage space loses out. In an imitation of Dale, I’ve started down-sizing some of my games into 5”x7” photo boxes. I managed to get the whole game into a single box.

Despite that very minor quibble, I’m going to rate the game as “I Like It” but I’d be comfortable ranking it as “I Love it!” for when I’m bringing games along to a community game night.  (And it’s even easier to do when it’s packed in my tiny box!)

Dale: Well, this is a cute little dexterity game, that I’m absolutely awful at because I have an intention tremor that comes out whenever I play dexterity games.  I’m pretty good about putting the new piece on, but man, I can’t move the card to the next place!  I do like the fact that this game doesn’t seem to have an age benefit/penalty; I think that gamers of just about any age can play this fairly.  If I still had small ones at home, this would definitely get a lot more play.  With my all adult game group, it was fun for a few plays, but not enough here to supplant Kapitan Wackelpudding or Tier auf Tier.

Dad, Gamer, Science Teacher, Youth Pastor... oh and I have green hair. To see me "in action" check out Dr. Carlson's Science Theater up on Youtube...
View all posts by Matt J Carlson →
This entry was posted in Essen 2022, Reviews. Bookmark the permalink.

1 Response to Review of Flotsam Float