Essen Preview #12 – Preview of On The Cards (Surprised Stare Games)

Essen Preview #12: On The Cards

Sebastian Bleasdale first made his mark on the boardgaming world with On the Underground, a networking game set in the London subway system.  His newest effort, On The Cards, is quite different indeed.  On The Cards is a set of 50 cards (split into 5 categories of 10 cards each) which provide rules to govern a trick taking game played with a regular deck of cards.  In every hand that is played, the rules of the game will change based on which cards are face up in the center of the table. 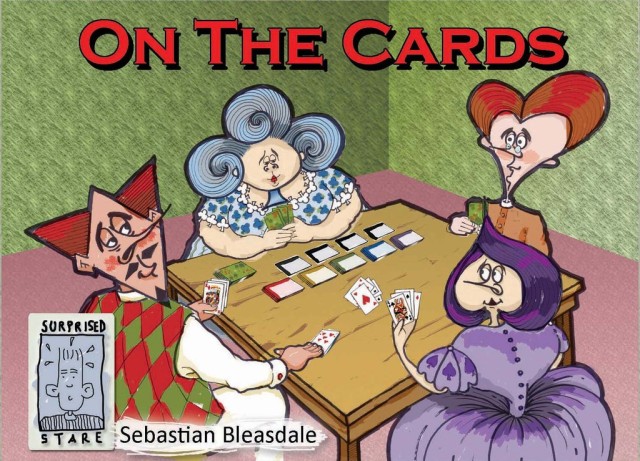 At the start of the game, each separate type of card is shuffled and one from each type is revealed in the center of the table.  The rules on these cards dictate how this particular hand will be played.  In general, a lead is made and then all further card plays must follow the current rules.  Unless otherwise specified, ranks go from 2 (low) to Ace (high), and if suits need to be ranked, they follow the Bridge sequence of (Clubs, Diamonds, Hearts, Spades).  The hand continues until at least one player is out of cards in their hand after a trick is won – at this point, the hand is over.  At the conclusion of the hand, the “winner” of that hand will select any one of the rule cards to keep as a scoring card.  The game continues on until one player has collected 4 scoring cards.  If the game continues, a new card of that type taken is revealed – and this, in turn, will change how the next hand is played as it has a new rule on it.

The basic rules that always apply (unless other rule cards specifically contradict these!)

The first set of cards determine how the hand will be dealt.  Some cards simply specify a number of cards which each player receives.  Others can be a bit more complex – i.e. “Deal each player seven cards.  After you have played one or more cards, if the deck is not empty, draw a card”.

The third set of cards tell you how the tricks are to be played.  Unlike most trick taking games, there is no guarantee that each player will play a single card to each trick.  These cards range from mild (before playing cards to a trick, evaluate the cards previously played in the trick – if you have played the best cards so far, you take the trick) to extremely complicated (If the cards you play result in there being three or more cards with the same suit amongst the cards played in the trick, then evaluate the cards.  The player of the best cards takes the trick).

The final set of cards tell you how to play the cards in that particular hand.  These are all fairly convoluted.  One example is: Play as many cards as the previous player.  Your cards must have consecutive ranks.  Treat wild cards (2s) as having a rank of your choice (and their printed suit) until a player takes the trick.  If you cannot or choose not to play, then pass.

The fifth type is optional, and they are called the Twist cards.  These are zany cards that really shake things up.  One that has been difficult to keep up with is: “After any trick is taken, reverse the ranking of the cards and the suits”.  Another says: “You are helping the player on your left, and score their points in addition to your own at the end of the round”.

So, really what On The Cards gives you is a framework to play a bunch of ever-changing mini trick taking games.  The good news is that each particular hand is fairly short, so even if you don’t like the combination of rules (or you are dealt really bad cards for those rules), it should be over quickly and you’ll get another chance with slightly modified rules.  The game is constantly changing because the rules to the card play are always slightly different. Again, the winner(s) of each hand takes a rule card from the table which is then replaced from the appropriate deck.  It’s honestly a bit surprising to see how much the card play can changed when only one of the four or five rule cards is switched up.

The downside of all these rule cards is that there are times when it is not entirely clear how the cards interact with each other.  While it is often clear what the general gist of a card is, some combinations can give competing rules lawyers plenty of work.  In our most recent game, we had to spend a fair amount of time before the start of each hand making sure that all four players could agree to how we were going to interpret the interaction of the different rule cards.  I think that a few of the cards could stand to have more precise writing on them to prevent this confusion, but it’s not a big deal as long as all the players agree on how the rules work with each other prior to the hand starting.

In the end though, the game is a lot of fun to play.  Eventhough we had our fair share of discussions/arguments over how to interpret the rules, once we started to play, we were definitely all laughing at the game and the sometimes mind-bending convolutions of the interacting rules.  The game seems to slightly outstay its welcome as a full four-player game can often take 10 or more hands for someone to win by collecting his fourth scoring card – putting the game time at just over an hour –  but this could be easily modified by changing the target number of scoring cards needed to win.

Overall, I think that On The Cards is a very interesting take on the trick taking game, and is certainly something that will be enjoyed by those who like the challenge of having to constantly adapt to new rules.  It feels somewhat similar to Stich-Meister (which came out last year at Essen 2010), but different enough to merit its own space in the “wacky trick taking card game” drawer in my game collection.

Nate Beeler: (1 play) When I heard the description of this game I immediately thought, “doesn’t Stich Meister already cover that territory?”  Having played it now, I can say On the Cards definitely isn’t breaking new ground, and it doesn’t appear to be much of an improvement on its predecessor.  In Stich Meister you have a tiny bit of control over which rules come into play each round, and you can try to choose a rule that matches your hand.  Many is the time when that choice hilariously backfires because you’ve given yourself a very strong hand when what you suddenly want is a hand to hide with.  In On the Cards the game is all about reacting in the best way you can with what you’re given; back to the slightly less interesting domain of the vast majority of card games.  I think having some input into the rules after having seen your cards makes a world of difference.

The rules combinations don’t always work particularly well, either.  When it plays nice, On the Cards is perfectly fine and fun and something I could see wanting to own, even.  Dale’s right about needing to stop and figure out what the rule interactions exactly mean before each round.  I have no problem with that, as it was pretty easy to get people to agree to anything that seemed reasonable.  Really, the only problem I had with the game is that even in my limited experience (and more from looking through the rules available) the different combinations often weren’t fun.  As a whole the game could represent thousands of different card games, but it feels like a good third of those are going to be crappy card games.  I didn’t experience that with Stich Meister, though to be fair that game does have a lot less variety with the rules it offers.

As an example, we had a situation where players had to take the trick if a mini three card straight or three of a kind came up in all the cards played in that trick so far.  In that hand we didn’t want tricks, because each card we took was negative.  Since we had our entire hands dealt to us up front, it was just a matter of playing along until the first person who couldn’t play one or two of the safe numbers was forced to take a trick and lose.  It didn’t feel like there was much of a reason to play one safe card above another, or until the end much reason to play one, two or three.  Not fun.  Another rule had the person to take the last trick losing ten points, the penultimate losing five, and all other tricks losing one each.  Sounds fairly unbalanced toward the last tricks, but considering we had a rolling trick that round, we only had four tricks total: it was supremely unbalanced, and came down to bad luck and not good play. In the end, even in a chaotic wacky card game, I want a little bit of control.  Right now that control would come in the form of setting this game down and picking up Stich Meister.

Jonathan Franklin: I’m going to disagree with Nate, in that On the Cards brings rolling tricks to the Stichmeister/Cosmic Eidex universe.  Some tricks end with everyone passing, rather than everyone playing once.  Some tricks end when one person passes, then they are forced to take the trick.  This adds a meta level to the game, in that all the options have to work with both rolling and whist trick styles.  I like the idea behind On the Cards, but found the variations a bit too uneven, leading to some pretty high luck results (all tricks worth 1 point, penultimate trick worth 5 points, last trick worth 10 points).  Another point in the game’s favor is that it incorporates both trick taking and trick avoidance goals, so you can get Hearts, Spades, Poker-ish, and all sorts of other hand types all in one game.  I’m tempted to suggest a variant that if all players simultaneously roll their eyes at the new set of rules, that the loser of the previous hand discards another rule from the game until someone wants to play the hand as dictated.

Dale Yu is the Editor of the Opinionated Gamers. He can occasionally be found working as a volunteer administrator for BoardGameGeek, and he previously wrote for BoardGame News.
View all posts by Dale Yu →
This entry was posted in Convention Report, Essen 2011, First Impressions. Bookmark the permalink.