So I have been mostly a Eurogamer and lately it seems the trend has been towards more theme but I have actually been more attracted to abstracts lately. So here are a few of the newer ones I’ve had a chance to play this fall.

Coerceo
The game comes in an appropriate sized box for the standard edition. One of the perks of most abstract games that I find appealing is that generally they are great looking games. Pretty and shiny if you know what I mean! Coerceo does not disappoint in this regard. I played the standard edition and it comes with nice, solid, triangular pyramids with a black 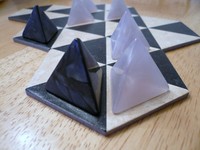 or white pearlescent appearance.
The pyramids have a nice feel to them. Each player starts with 18 pieces. The board is made of 19 hexes which are divided in alternating black and white sections. The game includes multilingual rules and the English rules are concise and well illustrated.

Game play is pretty easy. The basic set up has players pieces on triangle sections of their own colors on the outer most hexes of the board (which is the hexes placed to form a larger 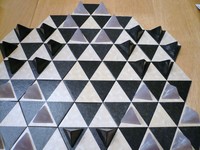 hex-Settler’s style).
Players alternate moving a piece from one triangle or their color to an adjacent triangle of their color. They may capture an opponent’s piece if the surround it by their pieces on 3 sides. If an opponent’s piece is on the edge of the board then only 2 pieces are need to surround an opponent’s piece. If you place your piece into a spot surrounded by opponent’s pieces you are not captured.
The other aspect of the game involves a shrinking playing area, like ZÈRTZ. If you are the player to move the last piece off a tile and it is connected to the rest of the board by 3 or less adjacent sides it is removed (ie. no islands can be created). Players keep the removed tiles and at a later turn 2 of these tiles may be turned in to remove any 1 opponent’s piece from the board.
The game ends when one player resigns or their last piece is removed from the board.

So, I like this game it’s nice looking it’s fun and it plays within an hour. I’d love to get my hands on a limited edition copy with red and black player pieces-it’s pretty! It’s easy to explain and play and there are ample opportunities for clever moves and set ups. Of course I hate it when someone does clever moves on me! Coerceo has the same sort of gameplay feeling as one of the Project GIPF games. It was interesting playing on the triangular portions of the hexes, one opponent felt like the triangular spaces with the triangular pyramids made it very challenging to see threatened pieces. It is a bit of a different perspective than you might be used playing on vertices/intersections or square grids.
The shrinking player area helps keep the game from running on interminably and I suspect helps deter stalemate type situations. Trying to decide when to pick up a tile adds nicely to the decision making process. With the modular board it’d be interesting to see if the company or players have any other suggestions for starting set ups. The rule book did not initially address draws/stalemates or repetitive movement (we just applied common sense) but since then, modified winning conditions have been posted stating that the first player with only one piece left loses and also discusses the conditions for a draw. In addition, a shorter game may be played with the winning condition of being the first to remove 12 of the opponent’s pieces.

Talat
Talat from Bruce Whitehill was released by HUCH! & friends this year. It was originally released as Drei. Talat is a bit unusual in that it is designed for 3 players. It can be played by two but I haven’t tried it yet. Talat is a nice looking game with 3 boards with 5×5 grids. 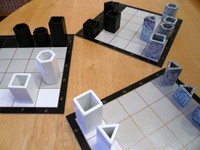 Each player has 9 pieces/towers (they are black, white and speckled). The pieces are 3 sizes – big, medium and small and 3 shapes – triangles, squares and hexes. Talat is a game of hierarchies where the weakest piece can capture the strongest piece completing the cycle.

Game play is a bit more involved here. Each player has two boards in front of them. The boards are 5×5 grids with player colors located on one side and opponent’s color on the other. Players take turns placing one of their towers on their home color of one of the two 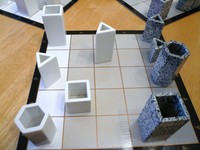 Players may then move or capture on one of the boards on their turn. Towers move either 1 space ahead vertically or diagonally. You may not move backwards. To capture another player’s piece you most be either adjacent horizontally, or vertically or diagonally ahead. In addition the rules of the hierarchy must be followed. Big pieces may capture medium towers and medium may capture small. If pieces are the same size, pieces with more sides top the hierarchy, in other words, hex beats square, square beats triangle. The small triangle can capture the big hex tower. Captured pieces score 5 points.
You can also earn 3 points by moving your towers to the opponent’s side of the board to their colored area.   The game ends when two of the three player boards are “frozen” meaning it is not possible for any more pieces to be captured.

As a three player game, Talat provides an interesting challenge. You have to balance your moves over the two boards, sometimes sacrificing a move on one side to make gains on the other. At times, one player may feel “ganged up” on if both other players are making moves against them. In some ways the meta game is more interesting, do you go after your stronger or weaker opponent, do you attack the same opponent or play defensively? Set up is interesting too, trying to decide when and where to play the more powerful pieces is a tough decisions. I think 3 player abstracts are difficult to balance but I think Talat does a reasonable job. My main drawback to the game is that it may have a somewhat limited audience in my gaming world. 3 player abstracts aren’t that much in demand and I generally prefer them with a lighter feel than Talat; it’s probably a bit heavy to play as a filler and not one I would use as a first choice introduce to non-gaming friends. That said, I find it interesting to play and wouldn’t mind trying it out a few more times against a variety of players.

Mondriaan 2020
Mondriaan 2020 is probably my favorite filler of the year. It’s a smallish 2 player abstract from Cwali. It’s been available to play at www.mastermoves.eu as Comino, but the designer, Corné van Moorsel feels it’s much better as a f2f game and I agree. The game comes in a nice small box and it holds 21 tiles representative of the artist, Mondrian. All tiles have red, yellow and blue or some combination of the colors. The tiles are a nice size

Gameplay is easy. The players are each dealt 10 tiles, 10 at random and one player takes the red and the other the yellow tile. All tiles are face up. The extra tile is the start piece. The start player gets a 5 point handicap. Each player takes turns placing a tile orthogonally adjacent to one already on the table assuring that all colors of touching borders match.
The player scores points equal to the number of tiles of the orthogonally adjacent touching colors, not including the tile just played.
If a tile cannot be played it is discarded from the game. After each player has had 11 turns, the game ends and the winner is the player with the most points.

As you can see, a simple game, but I enjoy the puzzle aspect to it and the challenge comes in figuring out how score big and block your opponent from doing the same. The game plays in about 10-15 minutes. I find games like this, the perfect after work game when you’ve had a long day, short in length and a little challenging and a lot satisfying when you play well. 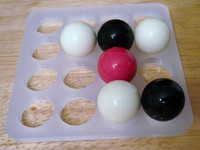 spheres. The system includes a base with a 4×4 grid and 16 spheres in each of 3 colors – black, white and red. nestorgames produces 3 versions of Shibumi. The fancier sets come with phenolic balls which are like billiard balls in feel and density-really nice quality.
I found a nice wooden bowl in my cupboard to hold them when playing and they look great on the table too! 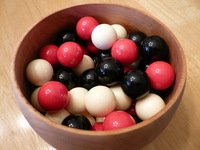 There are several games for Shibumi with rules listed on http://www.boardgamegeek.com.  Many of these are connection types games or grouping games. The number of players for the games range from 2-3. More are being designed as this is written. I have tried about 4 of the 2 player games so far. I’m not that great at the connection games but with the small grid the games play quickly so you don’t have to suffer too long if you are losing! The games are challenging.

The only issue I have is that some of the rule sets seem a little vague such as determining whether placements include diagonal or not or what is considered touching for example. Perhaps these are clear to people that play frequently but we made a few house rulings that seemed to go with the games. I like the concept of this game system quite a bit and this set is very nice. I look forward to trying out more of the games.