I remember watching Kurosawa’s Seven Samurai and Yojimbo as a youngster and was fascinated by the samurai heroes in those movies. Seiji Kanai‘s game Say Bye to the Villains evokes the fun I had cheering on those good guys. Say Bye is a pun on the Japanese word for punishment, seibai. A young girl’s father has been murdered and she prays for vengeance at the local shrine. Her prayers are answered by the Vanquishers who vow to avenge her father.

As usual the component quality is quite nice with decent cardstock and a sturdy box. The art and graphic design of the cards are great.

Game play reminds me a bit of Sentinels of the Multiverse which I played once a few months ago. Now cooperative, card driven, comic book themed games are 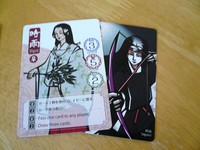 usually not my thing. Sentinels wasn’t bad but it seemed overly long and there didn’t seem to really be that much interaction in our game amongst the heroes.

In Say Bye, players each play a vanquisher or hero trying to dispatch the villains. The number of villains equals the number of heroes in play. In the final battle, each hero will have chosen a villain to fight.

Each character has 3 basic characteristics: speed, power and life. Speed determines who will attack first. Power determines the strength of the attack. If the Power of the attack is greater than your Life you are defeated. Some characters have special abilities.

The heroes have a mild, mannered secret identity and an attack mode card. 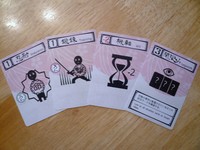 Each hero is allotted 10 units of preparation time. Time is spent in playing Preparation cards

that may buff the hero, cards that may allow you to look at villains Situation cards and cards that may affect other Preparation cards or Situation played. This is the basic mechanism of the game. In addition a hero’s special ability may be used, some of these abilities cost time units as well. The cooperative aspect of the game includes passing a card to another player which costs a time unit, hinting at which villain a hero might best defeat etc. 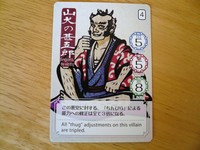 each have Situation cards 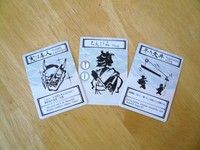 Players take turns playing preparation cards, using their special ability, doing a standard action or deciding aim at which villain the will engage in combat. After a hero takes aim at a villain that player is not allowed any more actions. When all players have chosen a villain the final battle ensues. All the situation cards are flipped face up and each combat is resolved.

Our first game didn’t go that well as we were handily defeated by the villains. In our second game, we were able to utilize our powers and cards much better and cooperate resulting in victory! The game is easily scalable to with variants to make it easier or more challenging. One of our players said he  thought it would make good solo play as well.
The game plays quickly and is pretty fun.  The rules are straightforward.  It will make a nice filler and if you like the theme,  I can see it being a hit. This type of game is generally not my favorite but I have enjoyed my plays of Say Bye.

Board game enthusiast
View all posts by lornadune →
This entry was posted in First Impressions, Reviews. Bookmark the permalink.

1 Response to First Impression – Say Bye to the Villains