Do Agricola and an iPod Touch go well together? Read and find out.

I just played Agricola on a screen under 4” and lived to tell about it.  If you don’t know about Agricola, it is a 2+ hour game about farming in the Middle Ages.  You can plow, sow, raise animals, and build by placing your family members, aka tokens, on certain locations on a central board.  Agricola is also one of the most highly rated boardgames around. 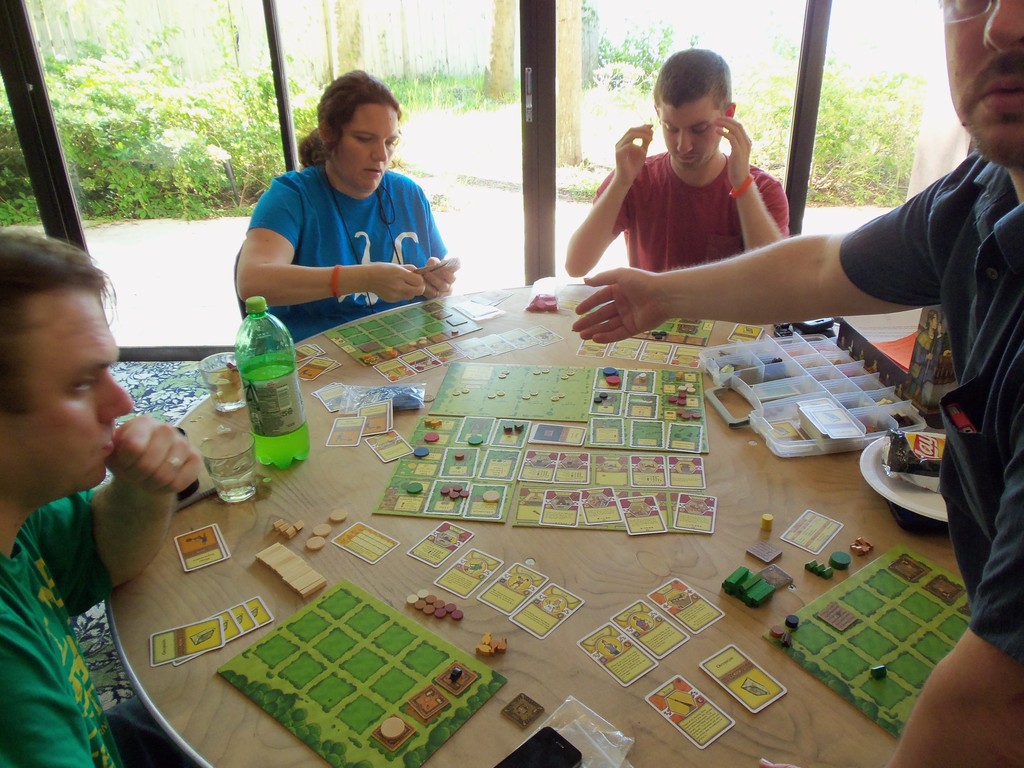 You have a central board, player mats, and tons of cards and bits.  Many tables are too small to truly spread everything out.

The geniuses at Playdek designed an iOS version of Agricola that I can play on my iPod Touch.  The question is how well can you play it on a Touch.

This is a very elegant online version of Agricola.  They have taken the central board and made it horizontal, using landmarks, such as rivers to divide sections of the board.  For example, the left side of the central board is on the left side of a river with a bridge over it.  If you cross the bridge, you are in the area where the 14 cards are that are revealed round-by-round.  This makes it easy to use one finger to move left and right.  There is a slight bit of up/down movement, but it is generally when you are getting used to the game. 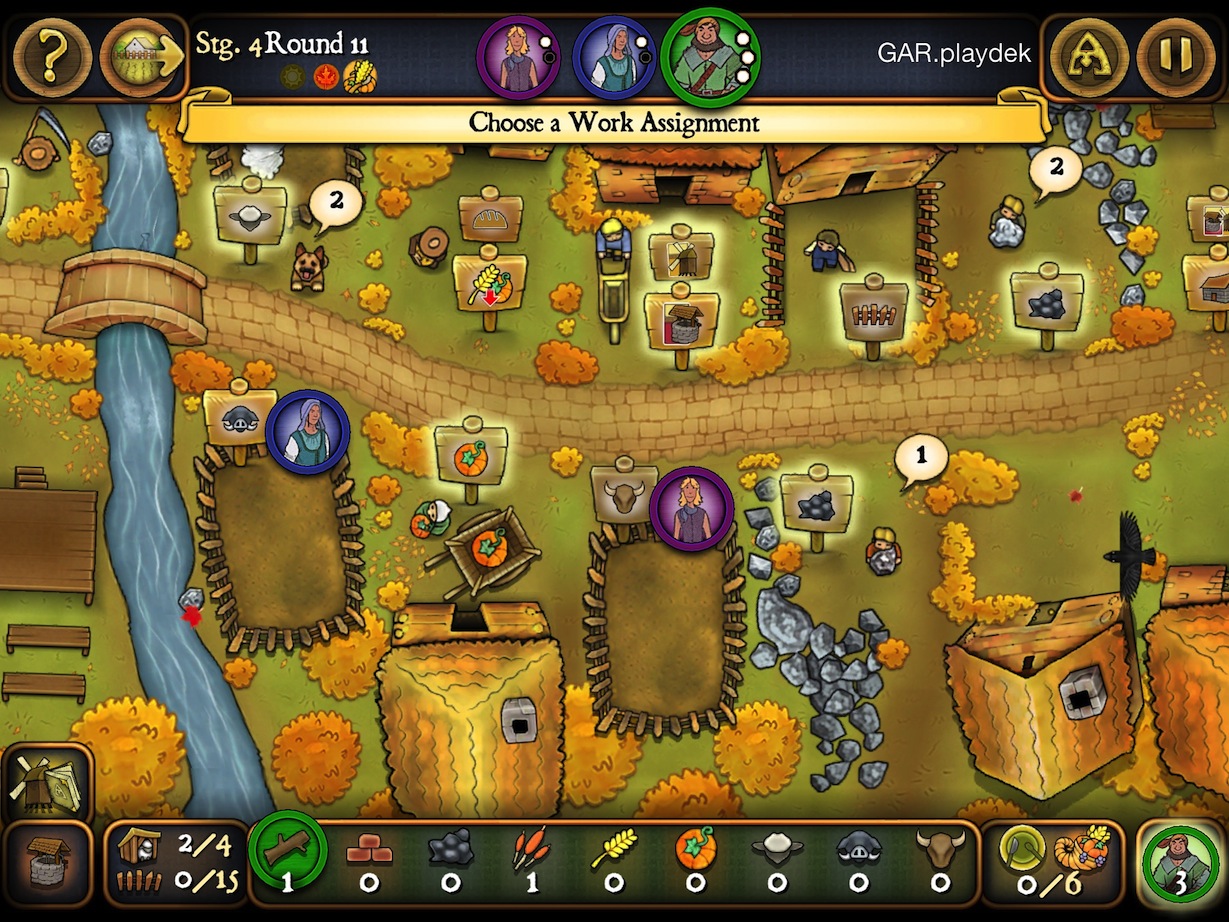 Image thanks to the fabulous website/blog PocketTactics, my go-to source for the few times I choose to tap and drag to play a game.  See http://pockettactics.com/2013/05/22/the-agricola-interview-joel-goodman-on-playdeks-biggest-game-yet/

Above, you can see a three-player game in progress.  The turn order is in the top center.  The choices that you have are shown by the signs.  To choose an option, you drag your token from the lower-right on to the card/space you want to use.  I’m not sure why they don’t just have you tap on the spot, but I am sure they have good reasons for having done it this way.  If nothing else it is a skeuomorphic design choice.  Glad Jony Ive did not get ahold of this.

I have not yet mentioned the player mats.  These are reached by tapping on the icon in the upper left to the right of the question mark.  You can see anyone’s mat, but if you play Agricola at the level where you want to see all the other players’ farms and cards at one glance, this is not the implementation/device for you.

On the lower bar, you have from left to right, the major improvements and the minor improvements & occupations.  They are stored as ribbons that appear and disappear when those icons are tapped.  Next is how many stables and fences you have left.  The middle is your stock, then to the right of that is how much food you have and how much you need.

The game layout is logical and clear if you have already played the game in its physical incarnation.  I took the Tutorial and appreciated it, but cannot really imagine learning the game and playing it on the Touch’s screen without having the physical overview to see all the pieces and how they interconnect.

I thought the implementation was excellent and after a few games, everything felt quite intuitive.  One feature that I used quite frequently was the question mark in the upper left.  It turns on ‘card mode’.  This covers the stalls with the corresponding cards.  You can still drag your token, just to the card covering the location.  This felt more natural to me than dragging a token to a pretty picture that might or might not do what I want it to do.  Remember the small screen?  Well, the type is legible and prevents mistakes.  In addition, there is an end turn’ button, so until you confirm wanting to do what you played, you can undo to your heart’s content.  Under settings, you can turn off the move confirmation, but I have not dared to do that yet.

I am not an Agricola Jedi.  More like a padwan.  I could crush the apprentice level (lower level) and hold my own against the journeymen (middle level).  I’ll leave it for someone else to evaluate the masters (higher level), but the game is so good that I learned some tricks by watching the AI master players.

I was thrilled to be able to try Agricola on my Touch and I proclaim it an astounding success with a few caveats.

1. Agricola takes thought.  I commute by bus and walking.  Sometimes I could not get through a whole four-player offline game in 45 minutes.  If you get home and pick up the game a few hours later, it is hard to remember what you were trying to do.  If you usually play Match-3 games and other time wasters, Agricola likely won’t take their place when standing in line at the Post Office, unless you are there around the holidays.

2. Text and icons on a small screen can be hard to read.  The younger you are and the better your eyes are, the less this is an issue.  Enough said.

3. I only tested the game in offline mode.  There is a whole online mode that I did not use because I was using a Touch on a bus without wifi.  If you have an iPhone or iPad, I could see sitting and playing it online, but I would tend to use a computer and go online to find competition.

This is the best gift you could give a gamer who travels a ton by plane, bus, or train.  I know it won’t be leaving my device any time soon.

Matt Carlson:  I’ll be adding Agricola to my latest iBoardgaming round-up within the week (it’s already half written!).  Some key points to keep in mind not mentioned above:  the game is universal so getting it for an iPod Touch / iPhone / or iPad means you can play it on all 3.  I haven’t done much on my iPod, but it is very nice on my iPad.  I’d consider playing a 2 player game in pass and play mode.  I also appreciate the solo gaming aspect of it.  Yes, you can play online in asynchronous modes, but I particularly enjoy playing the computer to explore strategies, and am very pleasantly surprised that Playdek has implemented the solo “campaign” game where you carry over some food and one occupation from each previous game, as you go for increasingly high scores.  Kudos for yet another very good boardgame translation to iOS!

If I were to rate the implementation, apart from the game, I’d say “Love It”.