Plunder is a new deduction game designed by fellow OG writer, Jonathan Franklin.  It will be in wide release this October (Essen 2013), and R&R Games sent me an early copy to take for a test drive.  I am, admittedly, a big fan on deduction games, and I’m always willing to give new games a try.

The idea is simple – each of the players is a pirate, and they have hidden their treasure in a secret location – denoted by three cards.  At the start of the game, each pirate is dealt one card from each deck (numbers vary from 1-6 in Red, green, and blue).  Each player receives a board to record information, and the search for treasure begins!  In the center of the table, there are three decks of cards, each has 18 cards, 3 instances each of numbers 1-6.

At the end of the game, players will score points in two ways: 1) by figuring out where other players have hidden their treasure and 2) by keeping opponents from guessing where his own treasure is.

A start player is chosen, and each round follows a similar pattern.  The player who is the active player for the round flips over one card from each deck.  If he wants, he can flip over the top card of any ONE of the decks to try to get a different face-up card.  After this, going clockwise around the table, each player says either Yes or No. (Well, in our game, it was “Aye” or “Nay”…)

As the answers are given, players can mark down the yes/no answers on the left side of their dry erase board.  The right side has three separate grids – one for each color – so players can use this space to help them deduce which cards are being held by which players. 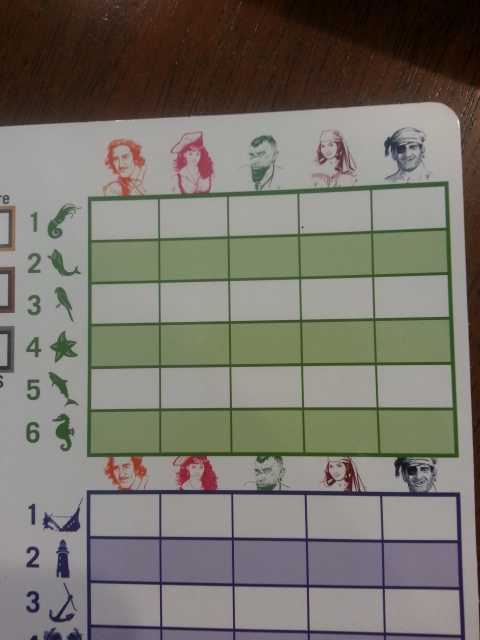 At any point in the game, if you think you know the three cards of another player, you circle them on answer card, and then place this card face down into the treasure chest that is used to collect these cards.  This can be done at any point in the game, and you want to do it as soon as you know as there are more rewards for answering sooner…  Interestingly enough, you don’t have to identify which player’s cards you are looking for, you simply need to circle the cards…

The round ends after all players have answered yes or no, and when all players have had enough time to record their answers and make deductions.  The active player is the next person clockwise around the table, and that player will then flip up one card from each of the 3 decks…   The game lasts for a maximum of 15 rounds, though it can end early if all players have used up all of their answer cards.

Now the game is scored.  The treasure chest is turned upside down so that the cards are in order from earliest to latest played into the chest.  The answers are read out, and if the 3-card combination on the answer matches any of the players, scoring happens.

My thoughts on the game:

I’ve only played Plunder twice, but I have enjoyed both.  The game moves quickly, each under 30 minutes.  There is a good amount of challenge in deducing the cards of your opponents, and the games have felt tense because of the real time nature of the answer cards.  As most winning scores are in the single digits, losing a point here or there because you were too slow to answer makes a big difference!

My big hangup with deduction games is that most of them require the players to be 100% correct in their answers during the game or else the game is ruined.  I can recall many a game of Black Vienna, Inkognito, Mystery of the Abbey, etc that were made unsolvable because a player game an erroneous answer at some point in the game.

Plunder does not solve this issue with deduction games, as each player still has to answer a yes/no question each round, but it certainly makes it a simple answer as there are only 3 cards to look at, and player are able to refer to their own cards each time they need to make an answer.  Furthermore, because of the nice answer grid provided for each player, there is a clear record of answers to allow double checking of answers, etc.

I’ve played the game with my boys (ages 10 and 12) and they had no issues with the level of deduction needed for the game.  In fact, it may have even helped one of them figure out their logic word problems on their math homework this weekend!

Production quality is nice.  The dry erase cards and boards erase easily, and the dry erase markers are hardier than most… We accidentally left one uncapped overnight, and it still works fine the next day.  Many of the other dry erase markers that have been included in games are so fragile that I have started to ask people to re-cap them between each turn in order to keep them working as long as possible.

Unnatural Selection is a small-box party game where players try to impress the judge with their creature creations.  The box is filled with 170 creature cards, each of which has a creature on one side and some sort of ability/characteristic on the other side.

In each round, one player is the judge.  That player deals out 3 cards to each other player in the game. All those players look at their cards and choose one creature to play face down to the table.  The judge then adds one card face down from the top of the deck.  All of the cards are shuffled and then revealed.

Now, going around the table, each player now plays a card onto one of the creatures – this time using the ability/characteristic side.  Once all of the cards are played, the judge then reads out the wacky creatures that are set to battle it out this round.

The judge then picks whichever modified creature he thinks is the best (using whatever criteria he wants).  The player who played that particular CREATURE to the table scores a point.  There is a variant which uses 10 double sided cards that have some predefined categories on them, but we found it more fun trying to read the mind of the judge to figure out what he/she would want in a creature…

So… if you were judge, who would win?

It’s a fun game for kids.  My boys have had a good time with it, and their first play here (with their neighborhood friends) kept them occupied for almost an hour.  There were plenty of laughs, and it was clearly a hit with that group.

I’ve also tried to play it with my gaming group, and lets just say that it didn’t get as good of a reception there… Though, I wouldn’t have expected it to do so.  After all, it’s not like my gaming group is going to sit down and play Apples to Apples or Zobmondo either.

The artwork on the cards is well done and whimsical in style.  I think that it’s a good fit for the target audience.  Given the reception that the game got from the neighborhood kids, I’ll keep this one around for them!

Dale Yu is the Editor of the Opinionated Gamers. He can occasionally be found working as a volunteer administrator for BoardGameGeek, and he previously wrote for BoardGame News.
View all posts by Dale Yu →
This entry was posted in Essen 2013. Bookmark the permalink.