Dahschur: Die Rote Pyramid is part of Mucke Spiele’s Edition Laufer, along with Taschkent, which was reviewed earlier this week. Games in this line were winners in a competition run by the publisher that required the use of certain game parts including a runner figure and red, green, and blue glass beads.

So, how did Dahschur tackle this challenge? 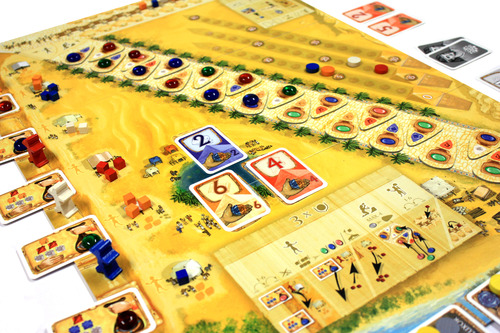 Another great photo by Henk Rolleman

Dahschur is not an easy game to explain.  It involves several parts of the boards serving different functions, so I will refer to the photo above.

At the top left is the procession.  Player’s place cubes in the procession or move them up towards the front to gain benefits in later phases.

Along the lower left, you see the market.  The market is made up of stalls which are the cards.  You move your runner figure, a salesman in this game, between the stalls to gain the gems, trading in the cubes that you see near the market.  Each player is a color and that color is a specific commodity, so at the market, some gems will be inexpensive for you, requiring only one of your commodity, but very expensive for another player, as the merchant was three of their commodity for that same gem.

In the lower right, where the blue is, you can see territories to be gains.  They have one gold and one silver coin on them to start.  In addition, they are worth points.  Silver coins are worth 1-3 and gold coins are worth 4-6, but they are hidden and of variable value within those ranges.

At the top center is the score track.

Play of the game

The game is played in four round and each round has the same three phases for each player in that round.

The first phase is for the non-active players to play a card numbered 1 to 6 from their hand to the board.  In a four player game, this will yield three cards numbered 1 to 6.  In a three player game, one of the cards is contributed by a dummy player.  You may not play the same number as a previous player.  This is important, as you will see.

The second phase is for the active player to use these three cards to take three actions.  The same action may be taken multiple times, so long as a different card is used for each one.

The Procession Action – Place a commodity of the active player’s color on the procession up to the space noted on the card used to take the action or move a commodity already on the track up as many spaces as the number on the card. 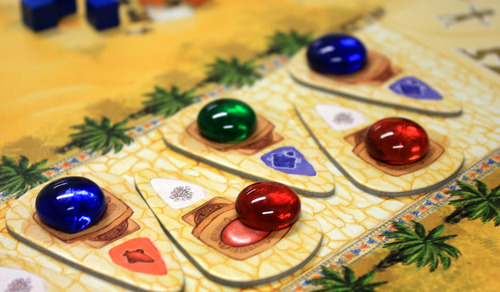 The boulevard by Henk Rolleman – note the owner color and the gem color on the marble plates.

The Boulevard Action – You may always place up to four gems on the boulevard, as this is not tied to the value of the card.  Let’s say that you have four gems to place, blue, blue, red, and green.  However, the next four plates are blue, red, red, green.  You have one too many blue gems and one to few red gems.  You may swap two marble plates that don’t have gems on them, so long as they are not further apart than the number on the card, so in this case, you could swap out a red plate and replace it with a blue plate from further down the boulevard to be able to play all four of your gems.   The awesome part about this is that placing gems on the boulevard earns you recognition points with the Pharaoh and is recorded on the score track.  While placing one gem on the boulevard earns you 2 points, placing four earns you 10 points.  In addition the player color on the plates gets points, so you might find yourself swapping one blue plate for another one before placing gems.

After the card is used to take an action, that card is returned to the player who used it.  I’ll bet you are asking yourself why you would ever play a high card to help an opponent do more when you could play a low card and limit them,

After each player has taken their three actions, they have the cards they played and had returned in front of them.  In a four player game, I might have 3-2-6 in front of me, as I played a 3 to the first player, a 2 to the second one, and a 6 to the third one. 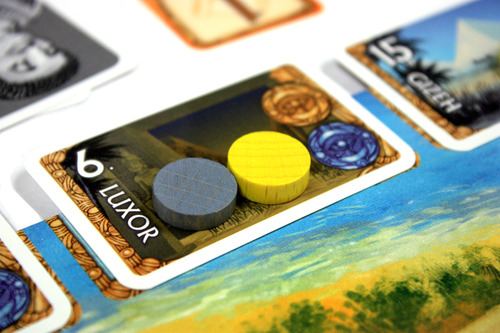 Another beautiful shot by Henk Rolleman

Each player then selects a card from the three in front of them and places it in a side board called the grave chamber and the next round begins.

The game ends after four rounds and the fourth card of of each player has been placed in the grave chamber.

Remember those gold and coins you have been collecting??    Wondering why I have not yet mentioned the procession??

Based on the order of the procession, you place your coins on cards in the grave chamber of the same number as the coin.  If you place a coin on your own card, you get that may RP.  If you have to place a coin on the card of another player, you get that many points and they get 1 point if it was a silver coin and 2 points if it was a gold coin.  Coins that cannot be placed are worth nothing.

Finally, players score 1 point each for their remaining gems and the highest score is the winner.

Whew.  I liked the idea of long term gain by manipulating the procession vs. the shorter term gain of the markets and boulevard.  I thought the choices of which cards to play were made more interesting by their multiple uses, but overall, this was not a game for me. The mechanical nature of the game, the extended playtime, and the baroque interrelationships led to a less than satisfying experience for me, but your mileage may vary.

Ben McJunkin (1 play) – Dahschur: Die Rote Pyramide is a relatively simple, relatively abstract 4-player-only game. More importantly, it seems to be my kind of game. The game’s mechanics aren’t really as polished as they could be, but I found the game relatively full of meaningful decisions.

To start with, there are some interesting hand-management decisions going on. On each player’s turn, the other players contribute a uniquely numbered card from their respective hands, which the active player uses to perform actions.  Given that there are various rewards for contributing the highest card on any given player’s turn, and that players might collect a coin if the sum of a player’s contributed cards match the numbers on one of four random cards, the conflicting incentives were rather fun to muck about with. You want to play low cards (to weaken your opponents’ actions) unless you play the highest card (to gain some benefit) and you want to have your cards sum to a specific number (for a coin) but you lose one card each round, so summing cards becomes very difficult (if you are always playing or discarding low cards, you lose flexibility).  And as the game progresses, you have increasingly fewer cards to work with.

As for the actions themselves, Jonathan is correct that they are abstract. But the abstraction of actions has never stopped me from enjoying a well-made game.  And I quite like all the interlocking parts (“baroque interrelationships” was a particularly impressive turn of phrase, Jonathan). You buy gems and place them for points. This takes cubes (which are limited). Or you use cubes to affect your coin-scoring opportunities at the end of the game. You collect coins by playing cards that sum correctly, but the cards you play affect the strength of your opponents actions. Playing high cards can get you some good benefits, but you must permanently discard one card each round, so you want to play cards you are willing to part with. And, of course, the cards you discard determine which coins will score, so you’d like to ensure that your discarded cards match the coins you collect.

Nearly everything you do in the game benefits your opponents in some way, but you usually only benefit one opponent and you often get to choose which one. The gem placement is perhaps the most interesting in this regard because you get more points (and save actions) for placing more gems in a single action, but you may also end up giving away points to specific opponents. So you want to figure out which opponents you want to give points to, and you have a small opportunity to alter the opponents who score for a given action. You want to make sure you’re not just pushing the leader ahead. If you try to avoid giving points to others, you usually end up taking away opportunities for others to give points to you. Managing that correctly throughout the game can be tricky.

The game is also chock-full-o-screwage if you know where to look. Since two players aren’t allowed to contribute the same numbered card to a given player, you can sometimes ensure that an opponent won’t reach an intended sum or can’t play a card that will give him/her a highest-card bonus. When players tie for things, the winner is determined by a single die-roll (and the loser of the roll gets a considerably weaker benefit). Forcing ties can be a ton of fun.

So, basically, its a neat little game, with a lot of hard tactical decisions, a lot of interaction between players (both for better and worse), and a fair dose of randomness. I had a hunch that I would like the game when, during the rules explanation, I kept saying “that’s really clever” after each new mechanic was described. If you’re the sort of person who plays shorter abstracted games like Web of Power or Before the Wind, this game would likely fit into that same mold.  After only one game, I can’t quite justify loving it, but I unquestionably “like it.”