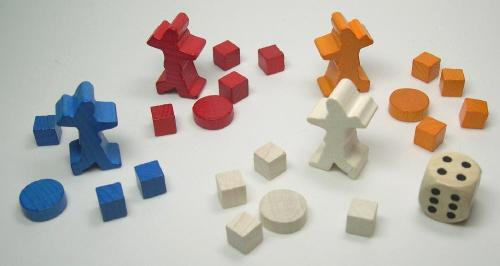 What game would you make if it had to include these pieces plus glass beads in three colors, red, green, and blue?

In 2009-2010,  MückeSpiele held a competition to design a game with these pieces.  There were 80 entrants in the competition and several of the winners were published.

This is a review of one of them, Taschkent.  It is part of an eight part series, Edition Läufer, which means runner in English.  I reviewed another game in the series, Dahschur: Die Rote Pyramid yesterday.  Two other games in the series are Urknall and Exposaurus.  The edition gains its name from the Läufer (runner in German) piece pictured above

I have never been to Uzbekistan, but I can say that I had a nice hour in Peer Sylvester’s Taschkent.

Taschkent is a pick-up-and-deliver trading game that uses the runner to move between stalls in a caravan, acquiring what is needed.  There are beautiful glass gems to be gained from some stalls, while others offer other benefits, such as placing huts, which can then consume the gems. 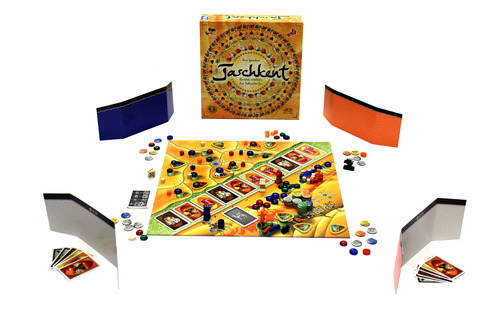 The board has four sections.  At the top left is an area with different regions that can hold huts that accept gems.  In the middle is the row of goods cards.  Below that is a row of camels which is called the caravan.  It offers special abilities based on which spot on the caravan you are on.  It is important to note that the cards in the row are not related to the caravan.  You do not get the silk, spice, or silver card when you stop at a caravan location  At the bottom right, there is a turn track, which provides huts and also generates tension using the die that was required to be included as part of the competition.  The art is all very attractive thanks to Klemens Franz, but there was confusion about the relationship between the card row and the caravan row.

There are some starting huts printed on the board and the players add more as the game progresses.  The regions are numbered and that is important for how they are resolved. 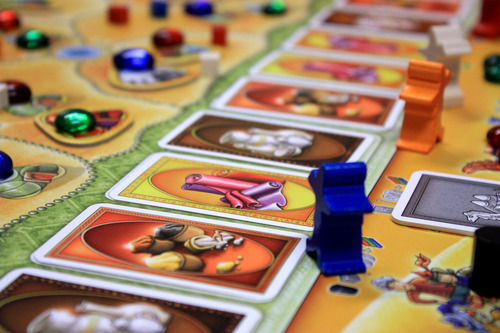 The above photo shows the runners along the market with three good types on cards (spices, silver, and silk).  In addition, below the runners are the special abilities, such as the cards, the gems, and the trade routes.

The game is played in a series of turns, each of which is two to four action rounds followed by a trading phase.   Each round each player gets to build a hut, build a trading post, move your runner (called a cameleer), or take one tugrik, the money of the game.  After taking one of those four, the player moves his cameleer.  After each player has one this, the round marker is moved. Each player is guaranteed two rounds, but after the end of the second round a die is rolled and depending on the result, there may or may not be a third round.  A fourth round is less likely, and there is never a fifth round.

Placing a trading post – place it in one of the upper regions and pay the price, depending on how many huts and trading posts there already are in that region.

Placing a hut – each player starts with one hut in their color and they may place it in the upper area during the action phase at no cost.

Moving the cameleer – you may move the cameleer up to three spaces in either direction in the middle part of the board.  You may pay to move him more.  Then you take the action of the space you landed on, so long as you moved the cameleer that turn (no staying where you were and taking that action again).  Each location on the caravan offers different benefits, making this the most common choice of action.  Check out the rules for details on the different actions of the caravan spaces.

After rounds of gaining goods (red gems = iron, green gems = jade, and blue gems = indigo), there is a trading phase, where you sell those goods to the huts at the top of the board.  When you sell goods, you gain either Turgrik (money) or cards (silk, spice, or silver).  You may not mix them, so it is one or the other.  The tension here is that money is needed to build more trading posts, as they are removed when you trade, but cards win you the game.

Ah, yes, the goal of the game – it is hard to explain until you understand the game –

The end game is triggered when either the special power cards run out, which come from one of the caravan locations, or the silk, spice, and silver cards run out.

Then you count up the Tugrik each player has.  The player with the least Tugrik cannot win the game.

I liked several of the ideas in Taschkent, notably the actions on the caravan and movement rules.  It felt like a linear rondel with some interesting choices.   I also liked the use of the gems in supplying the huts and the tension between supplying a hut for short term gain but having to remove that trading post vs. holding out for more.

It felt like quite a bit of churning and different math systems (how much do I get for selling this gem?  How much does it cost to place this trading post?  etc.) for a short game.  It is a solid design and attractive to look at, but did not inspire me to have another go at it.  I really like other games by the designer, notably King of Siam, so I look forward to his future games.

For more on the design process of Taschkent, see Peer’s designer diary at http://boardgamegeek.com/blogpost/12143/designer-diary-have-painting-will-design-taschkent

Ted Alspach: I like Taschkent in terms of gameplay and I like the board design. It packs a lot into a short amount of time, and like most of Peer’s games, it has a fresh feeling to it; Peer Sylvester doesn’t do copycat games. The weird thing about this game, given its origins, is that I think the meeple pieces are incredibly ugly and the components as a whole are not particularly relevant to the game. I have to wonder if this game would have been better served to be designed using these pieces, but actually produced with appropriate pieces instead of the ones forced on it by the game design contest.