Matt Carlson: Review of Lord of the Rings The Two Towers Deck-Building Game

Unsurprisingly, The Lord of the Rings: The Two Towers Deck-Building game is the stand alone sequel to The Lord of the Rings: The Fellowship of the Ring Deck-building Game.  I fully expect The Lord of the Rings: The Return of the King Deck-building Game to appear sometime in the near future.  Even naming it TLotRtTTDbG seems a bit much.   Oh, if only I was paid for my reviews by word count.  Since I’m not, let’s call it the Two Towers game.  As a sequel, the Two Towers game is similar to its previous incarnation, except for the inclusion of a Wall deck which is occasionally triggered to cause “bad things” to happen.  Running out of wall cards is a new way to lose so players will occasionally cooperate to prevent it.  The two versions can be mixed, although mixing works best with certain limitations.  Overall, the game plays as a reasonable central-deck deckbuilder, with a bit of Lord of the Rings theme.  However, the theme didn’t completely jump out at me and the rest of the game simply wasn’t quite my style. 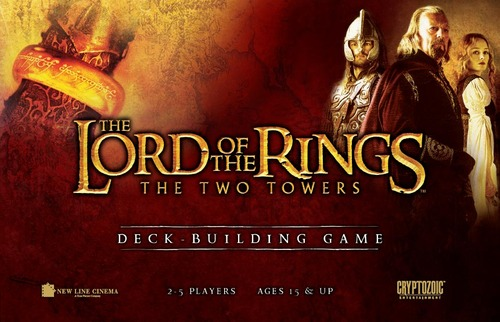 Standard deckbuilding rules apply, players start with a deck of cards and then attempt to improve it by adding and subtracting cards during the game.  As the game progresses, decks become more powerful while players try to accomplish the overall goals of the game.

The Two Towers has many familiar components to previous deckbuilders, so lets go over some of the common components to see how they stack up to other card games.

Starting Cards:
Players start the game with nine basic cards (3 bad, 6 good) plus one unique bonus card based off their chosen Hero.  In addition to their special starting card, each Hero (of the 7 available) has a special ability that can be used throughout the game.  This is a nice plus, giving every player a slight kickstart in a specific direction and helps to make things slightly different in future plays of the game.

Purchasing Cards:
Cards are drawn from a central pile and placed on a tableau (called the Path) of five cards.  Cards purchased are only replaced at the end of the turn.  Judging a card purchase is easy, as there is a single resource in the game: Power.  Power is used to obtain cards with “good” themes (locations, allies) as well as “bad” themes (enemy cards as well as archenemies).  Having a single resource avoids the common two-resource problem where a player ends with too little of both resources to accomplish something significant.  Since cards are replaced at the end of the turn, and cards may have harmful Ambush effects when drawn – a player may choose to purchase several lower cost cards just on the off chance their opponent may get hit by a bad card revealed on their turn.  Fortune cards are present in the deck which, if “bought” for a cost of zero, grant a minor immediate benefit.  While they may help the theme along a little bit, I found their presence somewhat confusing.  They essentially are a free “bonus” event that almost never provide an additional tactical decision on the part of the player (if it isn’t “bought”, the next player can “buy” it on their turn).  Had the cards offered some sort of “either/or” cost benefit option, it would feel less like winning a minor lottery.

Playing Cards:
Most typical cards are present with card combinations keying off previously played cards, cards in one’s discard pile, etc…  A few location cards represent cards that stick around granting small additional abilities after they’ve been played.  While most cards advance one’s own position, some cards punish the opponent, often by giving them useless Corruption cards worth negative points.  This can be countered by having defensive cards on hand (one primary use of the “One Ring” card) or simply using other cards to cull back out unwanted flack in one’s deck.  There is a moderate amount of player interaction, as in a typical game someone will play an attack card every few turns.  It should be noted in the Two Towers game, cards can affect the Wall card stack.  Many of the Ambush abilities simply trigger a draw from the Wall pile which holds many of the worst card penalties in the game. 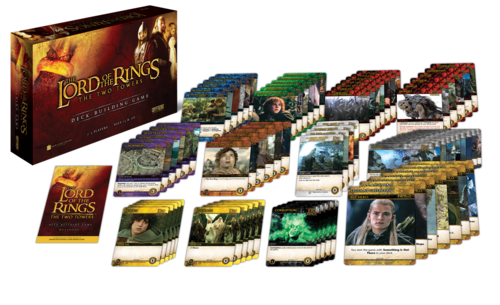 Points and Victory Conditions:
The game ends in a loss for all if the wall deck runs out or if the central deck runs low.  If the final Archvillain is defeated, the player with the most points wins.  In keeping with the single game currency (Power), there is only one primary source of points.  Each card has a point value, with higher priced cards worth more points – archvillain cards are worth the most points of all.  Points are somewhat balanced, one doesn’t have to defeat the final villain to win, but it would be difficult to win without capturing at least some of the archvillain cards.  A few cards have special victory point awards (X points for Y things in your deck, etc…) which can give minor goals for players in the game.  Those finding the base game too easy to beat can play with a separate set of archvillian cards designated for “impossible mode.”

Theme:
I enjoyed the books and movie, but haven’t gone so far as to learn Elvish. As a fan, but not a fanboy of Middle Earth, the theme of the game didn’t shine through brightly.  I believe part of the problem lies in the requirements of creating a specific number of cards.  There are only so many significant places, items, and characters from which to draw.  Less than half the cards  triggered some memory from the story.  Sure, the wall deck adds a bit of theme, but it wasn’t enough for me.  Instead of a looming breach with huge consequences, it simply seemed to be yet another game timer.  Hardcore fans will appreciate the theme, but the rest of us would need a bit of a brush-up on the books or movie to fully enjoy it.

Concluding Thoughts:
The Two Towers is a deckbuilder drawn from a single-deck, which is not my preference.  I find a single-deck experience adds yet another source of randomness (in addition to one’s card draws.)  This makes card purchases far more short-term tactical rather than long-term strategy.  I prefer planning out longer term strategy than a central deck offers.  In this case, the randomness is exacerbated by the inclusion of cards containing a player-specific ambush and the freebie Fortune cards.  One is an unavoidable penalty, which the other is an unavoidable boon.  I would prefer both types of card to somehow harm or benefit the entire party.  In some cases, this would even assist in the theme.  Why should a particularly harsh Wall card affect only one player, aren’t we all on the inside of the stronghold?

On the plus side, a central deck is much less intimidating for players new to the deckbuilding genre.  Players can set up quickly and then jump into the game, whereas a large static pool of available cards would all need explaining at the start.  It also allows for a much larger variety of cards to be present in any specific game.  However, for gamers familiar with deckbuilding but new to the game, it can be frustrating to play with only a few cards in view at a time.  Good strategies and correct tactical decisions will require familiarity with the rest of the (unseen) cards.  After a few plays, both concerns tend to equal out.  As I mentioned, my preference is to have all the cards available, allowing for more long-term planning.  This is a better fit for many of my gaming sessions where one or more of the players will be new to the game.

I rate the Two Towers as yet another deckbuilder that is satisfactory, but doesn’t have what it takes to stand out from the crowd.  I would play it if asked, but there are many other deckbuilders I would prefer to play.  Unlike many licensed games, this title has a solid underlying game.  Big fans of Middle Earth should enjoy it, but hardcore gamers will not be picking it up in order to broaden their gaming library.

Ratings Review from the Opinionated Gamers
I love it!
I like it.
Neutral.  Matt Carlson
Not for me…

Dad, Gamer, Science Teacher, Youth Pastor... oh and I have green hair. To see me "in action" check out Dr. Carlson's Science Theater up on Youtube...
View all posts by Matt J Carlson →
This entry was posted in Reviews and tagged cryptozoic, deckbuilding, LotR, reviews. Bookmark the permalink.

1 Response to Matt Carlson: Review of Lord of the Rings The Two Towers Deck-Building Game