Heroes of Metro City is a superhero themed deckbuilder for 2 to 4 players.  Players attempt to defeat the main archenemy before the tableau runs out of cards.  Unlike licenced superhero deckbuilder that are constricted by intellectual property concerns, Heroes of Metro City has its own setting allowing it to have a more free-form feel to the cards and combat.  While the player who defeats the archenemy is considered the “winner”, I find the game fits the theme better when played as a purely cooperative affair.  Heroes has a solid theme and ruleset with a few nonstandard elements to make it a decent game.  However, the game doesn’t quite reach the level needed to stand out from an already crowded field of deckbuilding games. 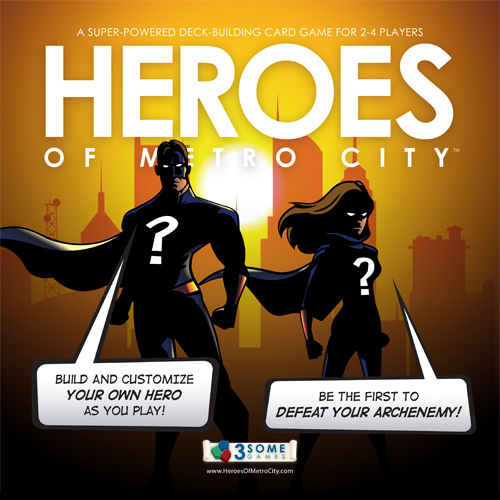 Hopefully, you are aware of the basic principles of a deckbuilding game.  Each player starts with a deck of cards which they use to acquire new and better cards in order to improve their deck by the end of the game.  In Heroes of Metro City, players are attempting to acquire cards that increase their plot points each turn or deal damage to the topmost card on one of the three enemy piles.  Defeated enemy cards are then rotated 180 degrees and are added to a player’s deck, typically granting additional plot points when played.

Several mechanisms give Metro City a different deckbuilding feel  First, the game technically has three unique resources.  Plot points (used to purchase cards), Damage (of different types, provided by Power Cards), and Energy.  Most (all?) Power cards cost plot points to purchase, but also have a energy cost needed to be paid when played.  Many deckbuilders have only two main resources (money and points, for example)  and those that have three different resources often run into problems creating situations where card-combinations can occur (for many, the most enjoyable part of a deckbuilder.)  Heroes solves this problem by allowing players to “lock in” energy cards into one of four slots so that they can be reused each turn.  Thus, once a  powerful energy card is obtained, it can often be reused again and again throughout the rest of the game.  Energy cards that can boost other energy cards (such as the basic, starting energy card) can still be used but they are placed in the discard pile after use.  Due to the superheroic nature of the game, cards do not typically affect other players – eliminating the need for defensive cards as well. 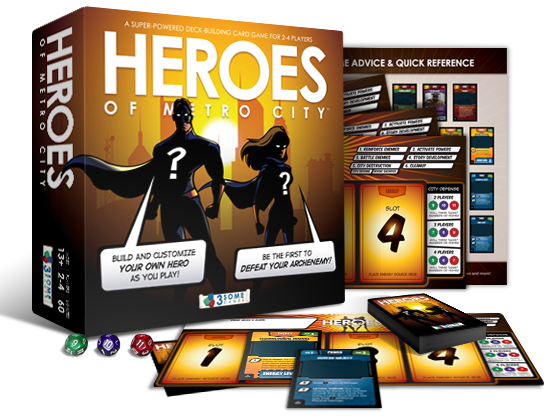 Another atypical mechanism is the game-end mechanism.  Any revealed enemy card that isn’t defeated during a turn must then roll and attack roll on one of three 12-sided dice, with attacks more likely when playing with fewer players.  Enemy attacks almost always take the form of eliminating the cards available for purchase (often called the tableau).  Most enemies target specific types of cards, and if an enemy requires eliminating a type of card that is no longer available, the game immediately ends in a loss.  Since the elimination categories are often rather broad, there is some strategy to picking the right cards to eliminate – especially as the end of the game approaches.

Players can prevent these attacks on the tableau by eliminating cards from their hand that match those targeted by the enemy.  In fact, this is even noted in the instructions as a great way to “cull” weaker cards from one’s deck.  However, I find this feature to be one of the weakest elements of the game.  Most deckbuilding games have a way to remove unwanted cards from a player’s deck in order to streamline the deck’s power. Since enemies target specific cards on the tableau, a player will often not have the appropriate cards in their hand to cull or, even more likely, the appropriate cards are some of the stronger cards in their deck.  In my games I’ve encountered only a few enemies target the basic starting cards (granting a single energy or plot point) leaving them to clog one’s deck for most of the game.  In fact, in one game I played particularly poorly I ended up with too many weaker enemy cars clogging my deck and since no enemies target enemy cards, I had no possible way to get rid of them.  In the future I will have to think twice about defeating too many weak enemy cards in order to keep my deck “pure”.  This is a fine tactical decision but ignoring available enemy cards seems to go against the superhero theme.  The difficulty in culling cards makes for a slower game, slightly outstaying its welcome.

Winning is not guaranteed, which is fine.  Most of my games included only two players, so that may affect the difficulty, going 0 for 3 in my first three games, finally winning in the 4th.  I’ll chalk up the first game to inexperience, but the next two games were stymied by enemies granting defensive bonuses to other strong enemies arriving early in the stack making it extremely difficult to make much progress.  Meanwhile, the enemies slowly chipped away at our tableau.  It reminded me of the occasional early monster imbalance in the first edition of Thunderstone.  Our fourth game went fairly well, and I attribute part of that win by a convenient “culling” of three of my starting cards early in the game. This allowed me to build up my deck much faster than normal.

On the plus side, all the cards (including enemies) include phase numbers to help newcomers figure out the appropriate times to activate or play abilities.  I do like the theme, including specific fun-sounding cards; who wouldn’t want an armed super-vehicle?  Players are given a chance to “jump start” their deck buy purchasing one or more cards before the game even starts.  Turn order bias is even reduced since players later in the order are given more plot points to spend.

Finally, I enjoy how the game doesn’t take itself too seriously.  After the tableau has been created, players then write their hero’s name at the top of their player card with a dry erase marker.  This can have an effect on the gameplay since a few of the energy cards give small bonuses depending on a hero’s name.  For example, affinity with nature grants 2 energy but also allows you to draw a card if your hero’s name includes any type of animal.  I find this hilarious, but it simply isn’t taken far enough.  Only a few of the possible energy cards have this addition, so games average about one bonus type per game.  If I want to play “The robo-bat from Mars” as my character and get the chance to earn three possible bonuses, I say the game should accommodate that!  Kudos for including such a “fun” little aspect to the game, but if you’re going to include such a thing don’t just dabble with it, fully commit to it.  Put something on almost all the energy cards and allow players to simply ignore it if they think that’s too silly.

Is Heroes of Metro City for you?  As I mentioned, it is a decent game if not a stand-out.  Its only real fault lies in poor opportunities for “culling” and the danger of unfortunate enemy combinations early in the game.  Both of these are focused around the enemy cards.  I love the idea of having my character’s name affecting the game, making the theme come just a little bit more alive.  However, I think it could have been so much more.  It isn’t as polished as branded superhero deckbuilders (Marvel, DC, etc.) but I prefer the style of putting myself more into the game.  A healthy number of strategies exist within the game (go for speed – drawing cards, or brawn – high damage) so a game isn’t always the same-old thing.  Heroes of Metro City doesn’t rise to the top, but it should be interesting enough for fans of the deckbuilder genre to give it a go.

Ratings from the Opinionated Gamers
I love it!
I like it.  Matt Carlson
Neutral.
Not for me…

Dad, Gamer, Science Teacher, Youth Pastor... oh and I have green hair. To see me "in action" check out Dr. Carlson's Science Theater up on Youtube...
View all posts by Matt J Carlson →
This entry was posted in Reviews and tagged deckbuilding, game salute, reviews, superheroes. Bookmark the permalink.

2 Responses to Matt Carlson: Review of Heroes of Metro City