Oink Games has done it again and managed to come up with another fantastic filler. Like Dungeon of Mandom before it Deep Sea Adventure is terrific multiplayer “push your luck” game for up to 6 players. The small box contains a submarine, a marker for air, 6 player pieces and several ruin chips (treasure) tokens and markers.

All players start in the submarine which also has the game timing mechanism-air. You start with 25 units of air which is used collectively by the players.

The players roll 2 dice and move from the submarine down to the ruin chips.

After the initial roll, you must decide if you go forward or turn around and return to the sub before you roll. When you land on a ruin chip you may pick it up and keep it in front of you without looking at it’s value. The deeper ruin chips tend to be worth more.  You replace the ruin chip you picked up with a blank marker with a X on it. 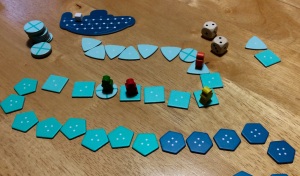 Sounds easy enough, right? Well the tricky part each player prior to their turn marks how much air they’ve used. Air units used are equal to the number of chips picked up so far on that exploration round . Also for every chip you have picked up during that exploration you move one less than the dice roll. Did I mention the dice are numbered from 1 to 3? Once divers have picked up their treasures it’s a race to get back to the sub without running out of air! If you do not make it back to the sub your ruin chips are lost and land at the bottom where they stack up. You are allowed to drop a ruin chip if you land on a blank chip.

If you failed to make it back to the sub, your colleagues will rescue you minus your treasure, throw you in a decompression chamber to get you into shape for the next dive. If you succeeded in returning to the sub you get to keep your ruin chips and flip them over as treasure. They will not count against your air in the next round.

The game consists of three exploration rounds or dives. The player with the most points wins.

I really like this game. It has a fun theme and it hits all the right buttons for a push your luck mechanism. You can feel your greed as you try and pick up one more treasure but it’s so heavy you start panting and using up more air…The race is on heading back to to the sub, can you get there before the air is gone? Will my fellow divers make it back in time? The tension rides high! I really recommend this game  and stop using all my air!

Eric Martin: (7 plays on a purchased copy) Deep Sea Adventure plays like a collective Diamant, with everyone trying to push their luck in order to go deeper and get more — but now what you carry affects the fate of everyone else and time runs out much quicker than you think it will.

This entanglement leads to the only issue that some have had with the game, namely that the player who leads after the first or second round can try to pick up as much as possible to kill everyone before others can score. I don’t have a problem with such evil doings as it’s amusing to see a game encourage suicidal tendencies (so to speak); you just need to collectively work against the leader so that you can all dive deeper, but you know at some point that players will break and start grabbing things, then you’re all on your own once again…

This entry was posted in First Impressions. Bookmark the permalink.