After dinner, time for more new games. We tried to translate the rules to Tschakka Lakka, another complex (not) game from Rudiger Dorn. 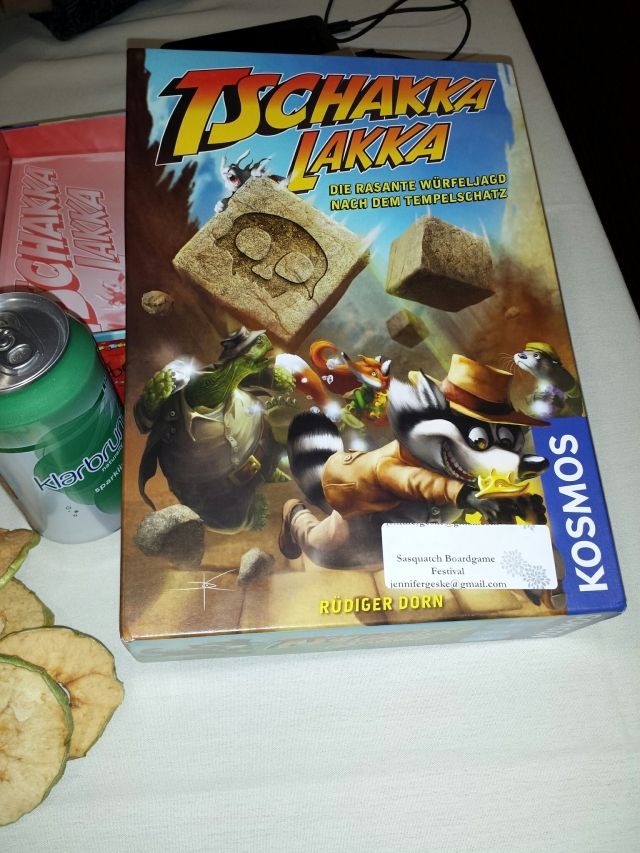 It’s a dice rolling, sorta push your luck game where you try to collect the most of each of the colors to score points

We’ll have to play it again later in the week with a better translation.

Next up is Cacao. Jeff from Zman just showed up with English versions of this and Marco Polo.

It’s a tile laying worker placement-ish game. The workers are on the tiles though, so that’s a slightly different twist.

I like this one a lot after the first play.

Next up was Crabz from Superlude. A cute light game that channels Hive. One game of this is enough. 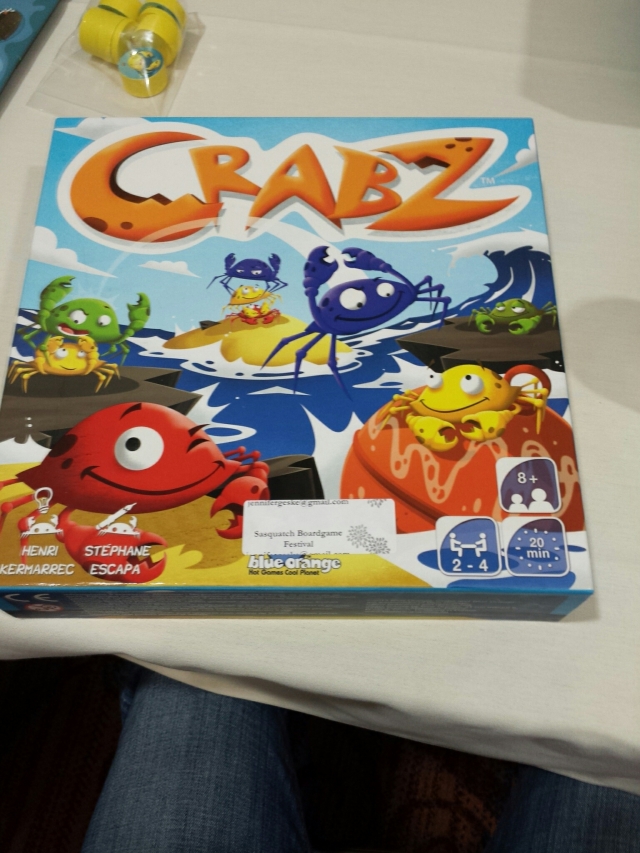 Following this is a different sort of deck builder called Design Town. It has double sided cards and you don’t hold a hand, you just flip from the top of your deck

The game is Taiwanese. About a year old says Dan Blum. An interesting idea, but a little fragile. Like Machi Koro, not quite enough cards in the box to be a really interesting game.
It also has a problem similar to Bruges where you can slightly move your cards in your deck to unwittingly give yourself information about the cards below.

At 10pm, only 3 active tables in the ballroom: our game of Design Town, a 4p game of the Zman version of Marco Polo and a 4p game of Kanban. A few others are mingling around, but there are less than 20 people in the room at this time – and there probably haven’t been more than that all day.

Then I figured that I would try a co-op game, The Game, a new game from Nuremberger.

After my first play, I don’t see what the fuss is about. Part of that is my lack of enthusiasm about cooperative games, but there’s not that much cooperation in it either.

We lost with about 30 cards left in the deck.. I might try it once more later in the week just to see.

The next game is the weird Japanese beauty pageant of a game called Too Many Cinderellas. 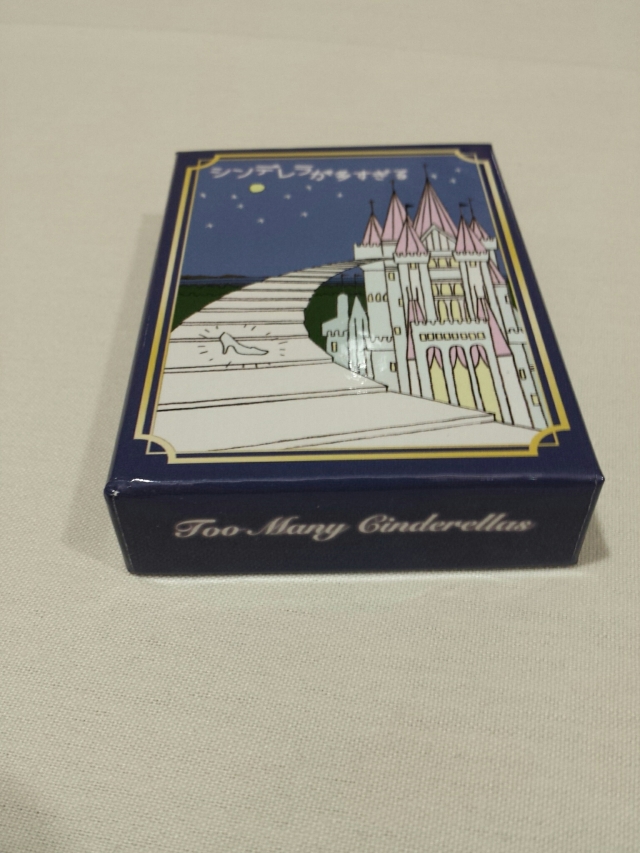 The game takes about 7 minutes. It’s really a neat design. Players take turns playing cards that rule out characteristics. Once they have been laid out, the player who has a still legal card is Cinderella and wins the game.

Finally a few new games from Pegasus are here.

No rules in this box full of wood from FF
I’ll have to get Peter to teach me this tomorrow. 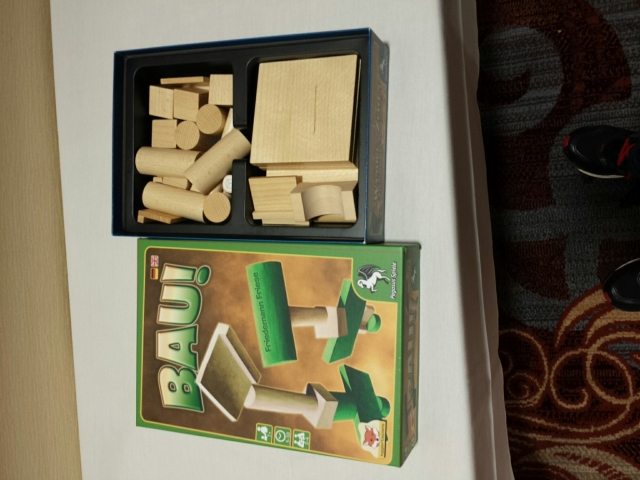 Also here are Mombasa, Residenz and My Village. 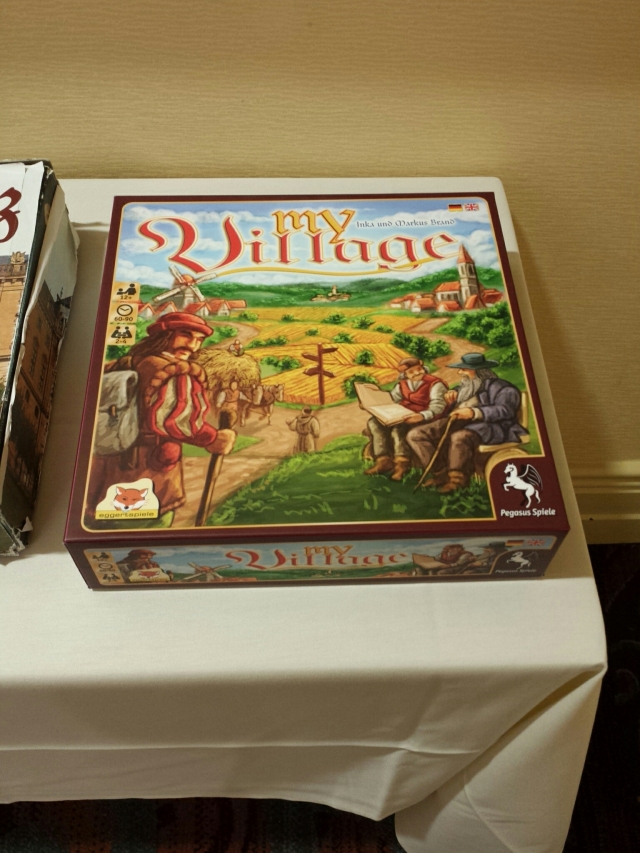 Ok. That’s a good first day. A lot of fillers, but twelve games today. 7 new titles for me.

More tomorrow. Marco Polo and Bau are high on my list. As Friday is also the first official day, I’m hoping that many more new games arrive!

Again, these posts will go up through the day, but I’ll try to post a fairly live picture stream on Instagram. My account there is dalepatrickyu