The Princess Bride is one of the iconic movies of my childhood.  Released in 1987, I would say that I have conservatively watched it at least 100 times, and I’ve worn out more than one pirated Betamax copy of the movie due to overuse.  Some of the quotes from the movie remain in my lexicon to this day.  Inconceivable? Not so much.

To the surprise of some, this 28 year old movie is still selling off licensing rights – and Game Salute continues their series of games which started with The Princess Bride: Prepare to Die back in 2013.  There is a set of three new releases, all small card based games, for 2015 that bring the movie back to life on your gaming table.  Though each of the three games stands alone in its own right – we have enjoyed playing them together as a set.

In the Miracle Pill, players compete in a drafting game to come up with the best Miracle Pill to help save the Man in Black from his mostly dead state.  There are 3 separate decks in the game, and each is shuffled to start the game.  Players will choose cards to play in front of them – and they will interact in different ways to score points.  The player who scores the most points from the cards in front of him will end up making the best Miracle Pill.

Well – let me describe the cards a bit.  Each suit has a slightly different feel to it 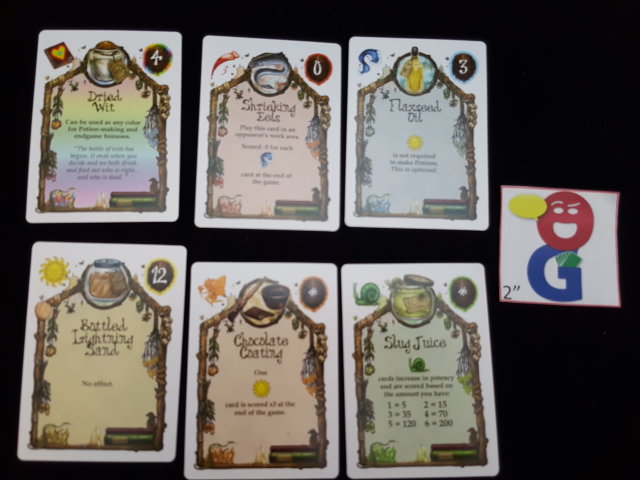 examples of the 6 suits

So what are these potions?  In Decks 2 and 3, you will find many potion cards.  They’re fairly easy to spot as the title of the card generally has the word “potion” in it and there is a flask in the bottom left corner of the card.  Potions are more valuable or more potent cards – but in order to play them to your area, you must first discard one or two cards already in play. The cost of a particular potion is on the bottom of the card.  In general, to play a Deck 2 potion, you must discard a card from one of the two suits listed.  To play a Deck 3 potion, you must discard two of the three suits listed on the bottom.  Of course, if you have some Blue cards already played, this might reduce the cost of the potion – perhaps even making the potion free.

So – how do you play the game?

Players each are dealt 4 cards from Deck #1 for the first round.  They will each look at the cards dealt and then decide which one of those 4 they want to keep.  When all players have selected a card, they are simultaneously played to the table.  If any of these cards have actions, they are dealt with immediately.  Then, all of the remaining cards are then passed to the left.  The procedure is then repeated with each player selecting one of the three cards just handed to him.  Again, they are played and resolved simultaneously and the cards are again passed to the left.  Now, players choose one of the two cards to play (and then discard the last card).  These cards are played, resolved, and then the first round is over.

The second round is much like the same – players are again dealt 4 cards, but this time from Deck #2 – but the cards will be passed in the opposite direction – this time to the right.  Once each player has drafted three cards, then the round ends.  The third and final round has the cards being passed to the left (and, of course, dealt from Deck #3).

After the end of round 3, you simply tally up your scores.  First, if you have any Rainbow cards in front of you, you must decide what color they are – as this could affect how other cards interact with them.  Once this is done, you figure out how many points you score.  They player with the most points wins. 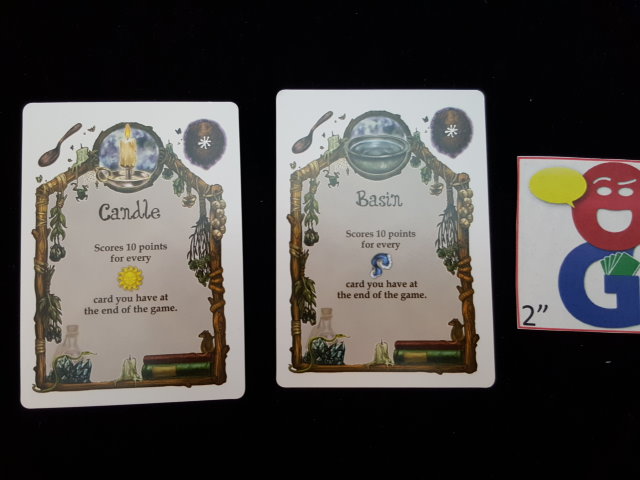 Miracle Pill is a clever streamlined drafting game.  The cards are set up nicely into three different decks so that the action and interaction of the cards continues to build thoughout the course of the game.  There are enough different ways to score points that each player can end up taking a different strategy if they want – though a lot of your strategy comes down to dealing with the cards that are handed to you.

Like any drafting game, your success is defined in part by what cards are passed to (or perhaps kept from) you.  It is important to always know what your neighbors are trying to do  because you can then anticipate what sorts of cards they might keep or what they would want.

The potion cards are a nice change to the drafting genre.  It helps give more value to different cards because sometimes you might end up taking a card only for its suit – in hopes that you can discard it later in the game to make a potion.  But, who knows, maybe you’ll end up getting the chance to take a card that makes that previously drawn card worth a lot of points?!

The game is played very quickly, I’d say that we’re probably finishing games in 10 minutes now.  After all, there are only 9 cards drafted per player in the entire game.  Near the end, it does take a little bit more time as you have to sometimes try to do the arithmetic in your head to figure out which card is a better play for you – but in general, the game simply flies by.  We’ve had winning scores as low as 120 and as high as 400+, and this is obviously due to just drawing the right cards at the right time.

I’ve found this one easy to teach and easy to introduce to beginning gamers.  If I were looking for an introductory drafting game, this is one I’d readily pull off the shelf before getting into some of the more complex drafters in my collection.