Dale Yu: Review of The Princess Bride: As You Wish

The Princess Bride: As You Wish 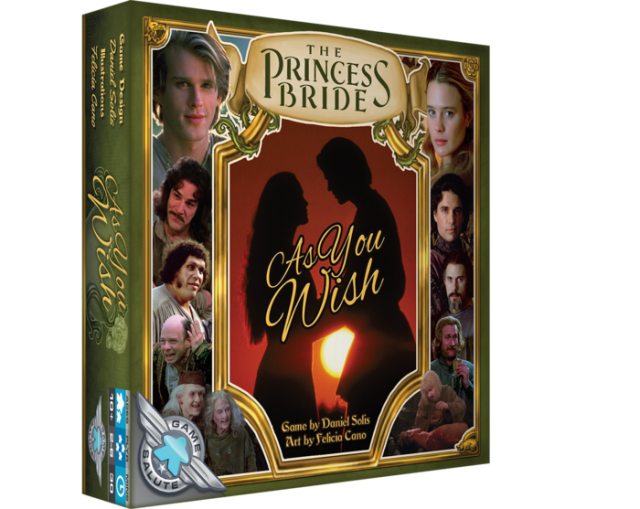 The Princess Bride is one of the iconic movies of my childhood.  Released in 1987, I would say that I have conservatively watched it at least 100 times, and I’ve worn out more than one pirated Betamax copy of the movie due to overuse.  Some of the quotes from the movie remain in my lexicon to this day.  Inconceivable? Not so much.

To the surprise of some, this 28 year old movie is still selling off licensing rights – and Game Salute continues their series of games which started with The Princess Bride: Prepare to Die back in 2013.  There is a set of three new releases, all small card based games, for 2015 that bring the movie back to life on your gaming table.  Though each of the three games stands alone in its own right – we have enjoyed playing them together as a set. 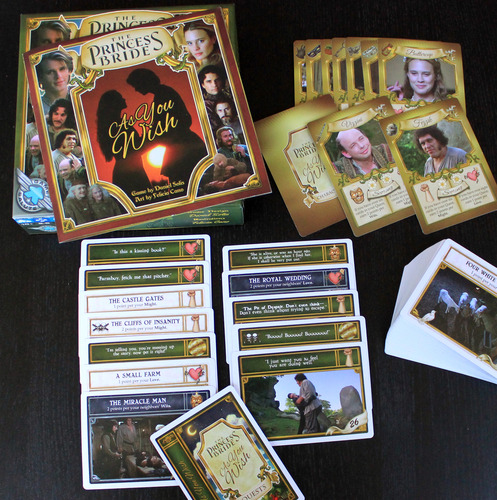 As You Wish is a set collecting game at its core.  In the game, each player takes on the role of one of the main characters from the movie.  Their character card gives them 2 different scoring choices.  The deck is made up of 75 Quest cards, each of which has a still frame from the movie and a corresponding title or quote at the top.  All of this is just flavor though.  The important parts of the cards for game purposes are found in the corners. 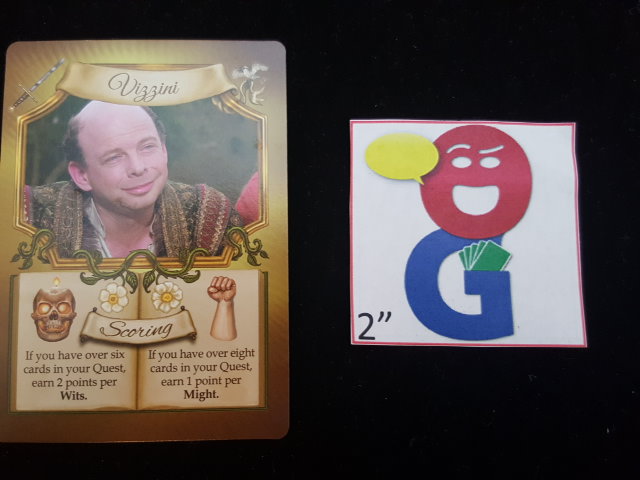 My favorite character card in the game 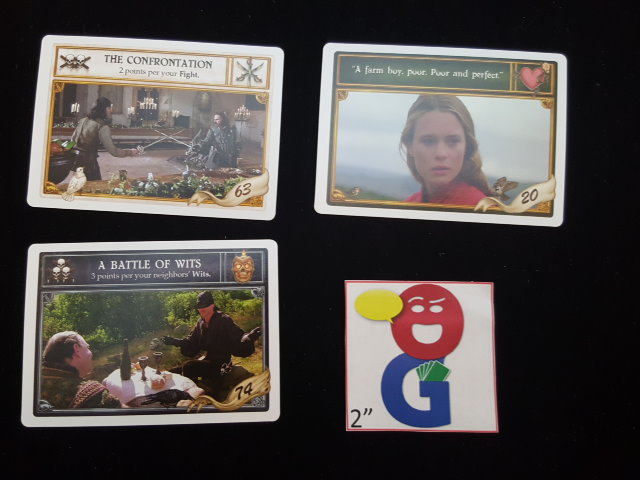 The most important thing on each card (regardless of type) is the icon in the upper right.  There are five different icons (Fight, Glory, Love, Might and Wits) – and all of the scoring in the game is based on these icons.  There is a number in the bottom right of each card which is important for determining turn order.  Finally, the upper left of each card may have one to three skulls that represent poison.

In each round of the game, the Dealer will draw (# of players + 2) cards from the deck.  He will then examine these cards and then place two facedown on the table and the remaining ones are face up on the table.   Players will choose one of the cards and add them to their story.  Cards are added on top of each other so that you can only see the most recently drafted card.  You will still be able to see all the icons though.  If you draft a card with skulls on it, you must check and make sure that you only have three or fewer skulls visible.  If you have more than that, you must then turn over cards until you only have three or fewer showing.  These cards will still count towards the length of your quest (important for end game scoring of your character card) – however, you will not have any icons for scoring on these facedown cards.

The order of drawing cards is done in ascending numerical order (of the cards drawn in the previous round).  The player with the highest number showing is always the Dealer, and that player is also the one who goes last in each round.  While all non-Dealer players choose only one card from the display, the Dealer must choose two of the three cards which remain by the time his turn comes up. 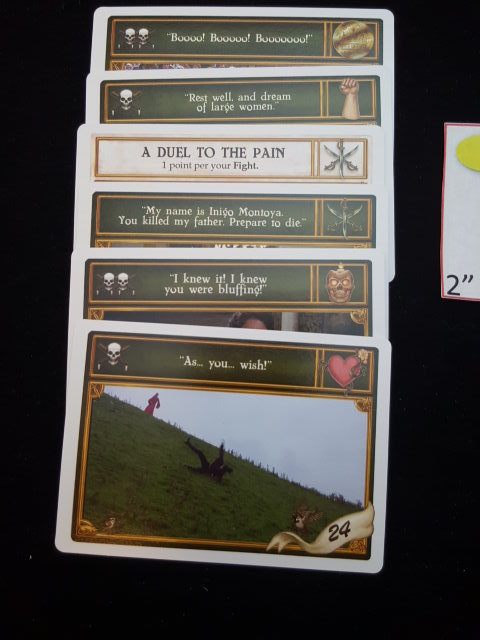 A quest in progress

The game continues on until at least one player has 9 or more cards in his Quest at the end of a round.  At that point, you move into the Scoring phase.  Again, there are three main ways to score points

Of the three games in the 2015 Princess Bride set, this one is my favorite.  While the theme still seems mostly painted on, the actual set collecting game presented here is well constructed.  The game plays quickly, usually lasting between 5 and 7 rounds.  As such, each card choice in the game is fairly important to your overall result.  I do like the format of having two face down cards in each round. You do have to try to read the Dealer’s mind a bit to guess whether he’s tried to hide the best cards facedown where only he knows the identity.  Do you choose one of those cards? Or do you stick to the faceup cards where you are assured as getting something that you want? 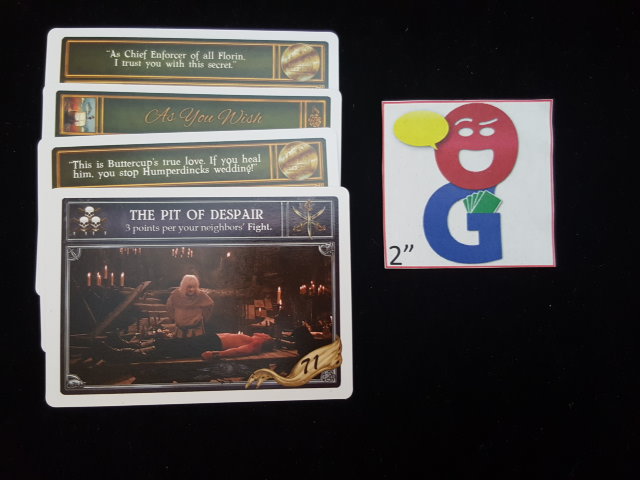 I’ve found that there are many things to consider when choosing a card.  First, if you know that you are collecting a particular icon, you will be naturally disposed to getting cards with that icon on it. However, you do have to be mindful of the poison skulls on the card as you are limited to only having three skulls visible at any time. You also need to be mindful of how the card you choose this turn affects your turn order in the next round. For instance, if none of the current cards helps you, you might want to draft a card that allows you to pick earlier in the next round so that you have a better choice.  And finally, if you see a scoring card available (white or blue), you likely need to strongly consider picking it up because it’s hard to score points without them, and if you pass it up, one of your opponents will then likely add it to their Quest and score points with it instead.

There are also times when you’ll want to be last in turn order.  Remember that the highest number from the previous round becomes the Dealer in the next.  While you have the least choice of cards, you do get to draw two cards to your Quest – and this is the best way to ensure that your own Quest is long enough to trigger one or both of the scoring opportunities on your Character card.

The game moves quickly, and most of ours have ended in 20-30 minutes. While we play, we have made sure that players read each quote aloud as they add the card to their stories, which usually generates a few smiles and chuckles.   The theme is nice, but the big thing for me is that this game would standalone as a nice filler even without the theme.