Tumult Royale was one of my more anticipated games coming out of Essen 2015.  It was one of the two new big box games from Kosmos – something that generally piques my interest – but it was also a new release from Klaus Teuber, one of my favorite game designers.  I got a little peek at it during the show, and then I was extremely glad to hear that it was getting a US release not long after SPIEL 2015.  As you probably know by now, Thames & Kosmos has started to release most of the Kosmos game line here in the US.  Their initial releases were mostly reprints of the famed Games for Two series, and this year’s releases represented T&K’s first chance to co-produce the new games from Essen.

In the game, players take on the role of competing royals, each trying to show up the others by building the most statues of themselves across the countryside – a countryside that has been conveniently divided into a uniform square grid of differing landscapes. It is comprised of a number of larger square (3×3) tiles.  At the start of the game, the board is built with half of the landscape tiles being face up and the other half being face down.  Each player also starts the game with one of their statues built on a pasture space.  Furthermore, each player is randomly dealt a rank card (ranging from 1 to 4, with 1 being the highest rank) and receives 30 supporter tokens.  Each player gets a castle shaped player board where his 25 statues rest (until built).  This board also serves as the player reference as both a building cost chart as well as a game phase summary are found on it. 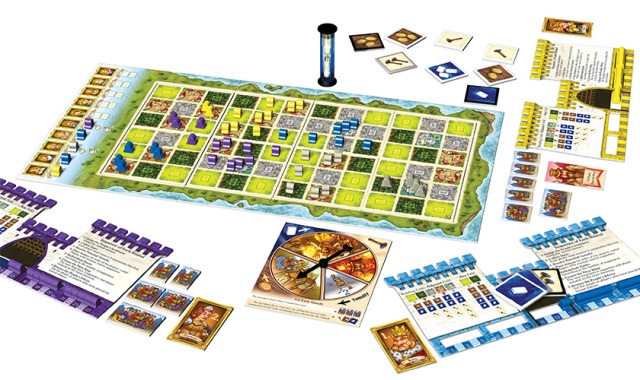 Promotional picture of the game in play

The game is played over a number of rounds – each with the same seven phases.

1) Spinning the spinner to determine what the people want.  There is a spinner which will determine a result of 2, 3, 4, or 5.  Whatever number comes up indicates the number of commodities that the people need at the end of this round.

2) Collecting taxes – the game has 39 commodity tokens – bread, marble or tools with values of 1, 2, or 3.   These are turned facedown in the center of the table, and then three are randomly chosen and set aside for this round.  The remaining tiles are left in the center, and when all players are ready, a sandtimer is turned over and players have about 20-25 seconds to pick tiles from the table. Players may only use one hand in this phase – they pick up tiles, look at them and then decide to keep them or not.  If they choose to keep them, the commodity is placed face down on the player’s castle board.  If they do not want the tile, it is returned facedown to the table.  When the sand timer runs out, players all stop picking tiles, and then all the tiles (both on player boards and in the center of the table) are revealed.

examples of the different tiles – normally these would be face down

3) Check for tumult – in general, commoners hate having their stuff stolen by the nobles, and now the people see if they have been left enough to survive.  The commodities in the center of the table are arranged by type, and each of the three types is checked to make sure that there are at least as many of that type remaining as the number on the Tumult spinner showed in the first phase of this round.  If there is not enough left, there is a tumult for that particular commodity.  All players count up the number of that commodity which lie on their player board, and the player who took the most (i.e. stole the most from the people) is punished by the people.  (Your number of commodities may be modified by the People’s Mercy – more on this later).  That player loses 3 supporter tokens and is allowed to only keep a single tile of that type, and it must be the tile with the lowest value.  If there is a tie for the greediest noble, the player with the higher rank (i.e. lower number) is the big loser.

4) Build statues – so what do you do with all of your stolen commodities?  Use them to build statues, of course!  In rank order, players are allowed to build 1, 2, or 3 statues on a particular field of the board.  In general, you have to build on a space that is orthogonally adjacent to a space where you have previously built; though you can build on any non-adjacent unoccupied forest or pasture space at double the normal cost.  Refer to the chart on your player board for the cost to build in each type of space (and the number of statues that are placed for that cost).  You discard commodity tiles to pay for your construction, and if you have any excess materials, you will receive one supporter token for each unused commodity on a discarded tile.  Once all players have had a chance to build, you start again with the king and build again on one more space.  This continues until all players cannot build anymore.  At that point, the phase ends and all players discard any unused commodity tiles back to the supply – note that players will NOT receive supporters for discarding tiles in this manner. 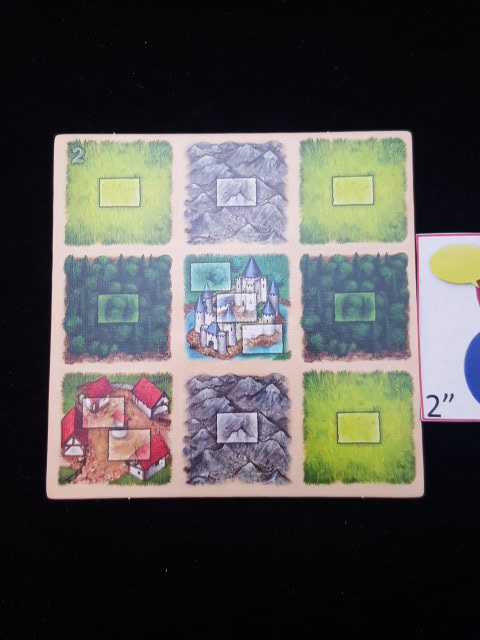 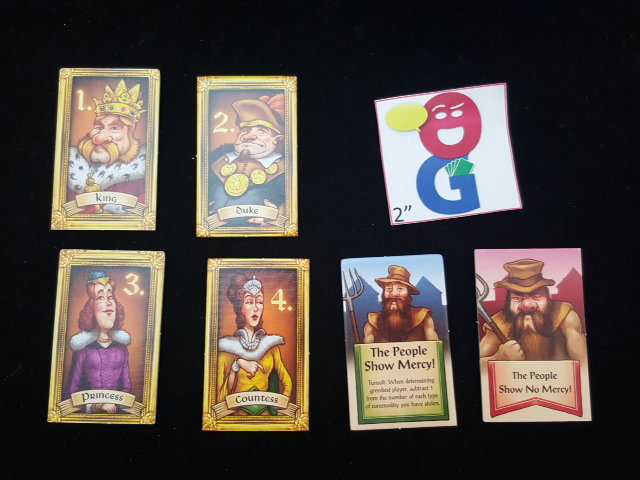 6) Crowning the king – the king must now return 5 supporters to the supply and then moves one of his statues to the leftmost unoccupied space on the royal chronicle.  For the first five rounds of the game, a single statue is placed on the chronicle.  From the sixth round onwards, two statues will be placed.  Furthermore, at the end of the third and fifth rounds, you are instructed to reveal some of the face down landscape tiles on the board.

7) Receive the People’s Mercy – whichever player(s) have the fewest statues on the board receive mercy from the people.  They turn their Mercy card to the “People Show Mercy” side while all other players turn their card to the “No Mercy” side.  In the next round, if there is a Tumult, players who have the People’s Mercy are able to subtract one commodity for each of their personal totals when trying to judge who was the greediest royal.

If the game end is not triggered, you go back to Phase 1 and play another round.  The game can end in two ways.  First, if a player is able to place his 25th and final statue, the game ends immediately and that player wins.  Second, anytime after the sixth round is complete (that is, any round where the new king places two statues on the Royal Chronicle), you check to see if the game ends.  There is a number underneath the double spaces.  If the difference between the highest and lowest number of statues placed by a player is greater than the number printed on the board for that round, then the game ends.  The winner is the player who has played the most statues.  If there is a tie, the tied player with the highest rank at that moment wins.

Due to the combination of the designers and publishing house, Tumult Royale was high on my list of games to try.  It should be available in the US by this time as I received my review copy from Thames and Kosmos.  After my initial fan boy excitement wore off, I got a demo of the game in my meeting with Kosmos at Essen, and I was initially put off when I realized that the game involved simultaneous play.  This is a mechanism that I’m not really a big fan of as it often rewards the player who can grab things the fastest or rewards the player who is 5% better at a task.

However, the constant threat of being the cause of a tumult makes the simultaneous resource acquisition phase to be more than just grabbing things as quickly as possible.  You really do need to try to get what you need without too much extra – or at least keep an eye on what others are doing and try to have less than what they are getting…  The risk/reward ratio is tight, and you can have some really nice turns when you pick up extra tiles, though you can also have some turns where you can’t build a single thing if you’ve been hit by a tumult.

The cost for building in a non-adjacent space is hefty, costing double the base cost – but this will likely prove to be worth it down the road as it gives you many more adjacent spaces on later turns… This might help you salvage a turn where you don’t quite collect the right tiles… 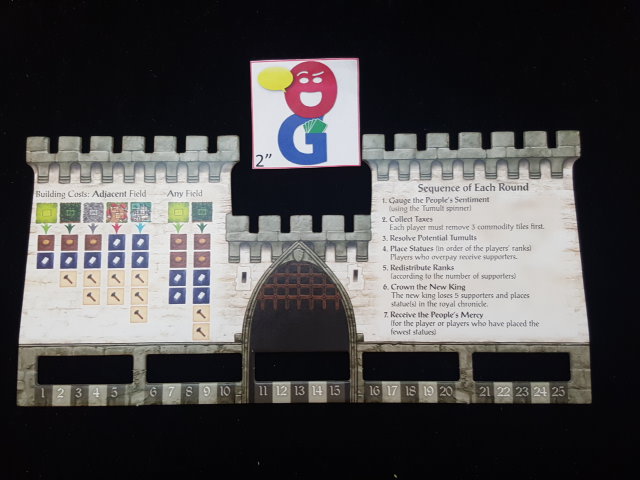 I will say that our group tends to forget about having the People’s Mercy until they get stuck with a Tumult – and then this causes them to recount the stolen goods with the bonus!  It’s a pretty good catch up mechanism as it allows the player in last place to be a bit more aggressive with their tile collection which in turn should lead to more building on the next turn.

For me, the bigger challenge for me in the stealing phase is not the simultaneous play but rather the time pressure of getting the right tiles and enough of them in the time allotted, and thus my fears about the game are unfounded.

The game plays quickly – each round doesn’t take that much time.  The stealing phase is only about 30 seconds long, and the resolution of the tumults often is quickly accomplished.  Choosing where to build your statues takes a little bit of time, but in many rounds, you only have enough resources to build one or two statues, so you don’t have that many things to consider.  The other thing that you can try to manipulate is how to spend your resource tokens in a way to generate extra followers.  Getting the placement of one or two extra statues on the royal chronicle is a nice bonus for the cost of 5 followers – and it can really be a boon to be the one who chooses which extra tiles are flipped up at the end of the 3rd and 5th round – as you’d like to be able to open up spaces near your existing buildings.

After two games, I very much like Tumult Royal, though I’m not sure yet if I will end up loving it.  It will certainly hit the table more over the winter, and I’ll probably revisit this review in a few months to report back.

Andrea “Liga” Ligabue: it is just a first impression after one play in Essen but me and Caterina enjoied the play. Tumult Royal is a good game, with interesting decision and some nice mechanic. Probably a bit too much abstract for my taste and I’m not sure about the longevity.