That would be Helios by designers Martin Kallenborn and Matthias Prinz.  Players are high priests forming and developing their lands, hoping to secure a virtuous place in the history of their people.  Success is dependent upon the movement of the sun god Ahau, for the sun is necessary for the land to produce the resources needed to construct the fabulous cities.  Will Ahau be merciful?

Players will construct their world on their personal circular board by acquiring and placing hexes representing different types of terrain (redwood, granite, bamboo, obsidian or springs) and temples.  They will take actions to move the sun, which produces resources on the lands upon which it shines.  They will then use these resources to construct buildings, which will give them various abilities, mana stones (used primarily to recruit characters) and victory points.

In each of the four turns, one of each of the five types of terrain are made available, plus one random terrain tile.  Three rows of six action tiles are revealed.  These action tiles will allow the player to perform the major actions of the game:  create land, add a building or temple, or move the sun.  A player’s turn consists of taking the bottom tile of one of the three rows and performing the corresponding action.

Create Land.  The player takes one of the available terrain tiles — or a bonus tile — and adds it to his player board, placing it adjacent to a previous tile and within the confines of the grid.  The path of the sun, which circles these tiles, cannot be impeded.  A resource of the appropriate type is placed on each newly placed tile.  Bonus tiles do not produce resources, but rather earn the player end-game victory points for achieving the conditions depicted on the tile.

Build Temple or Building.  A temple is built on an empty tile and will earn the player points for adjacent hexes when the sun shines upon it.  Further, when constructed, a temple earns the player one or more mana.  The construction cost for a temple is progressive, one resource for each temple present on the player’s board, including the new one.  For example, constructing a third temple will cost the player three resources.  These resources are removed from the player’s world and returned to the general supply. 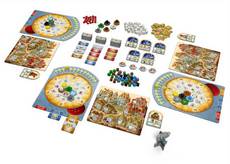 Building are not constructed on a player’s personal board.  Rather, there is a separate board depicting 12 different buildings.  Each of these buildings lists the resource cost to construct it, the benefits earned, and any special abilities it grants.  Benefits may include victory points, mana and increased sun movement.  The special abilities are also wide ranging and can be quite useful.  For example, the Warehouse allows the player to place two resources on a land tile when the sun shines upon it, while the Land Steward allows the player  to take and place an extra land tile on his personal board.  Each player may construct each building once, and this is indicated by placing a player’s token (shaped like a small house) upon it.

Move the Sun.  In order for land to produce new resources, the sun must shine upon it.  This action allows the player to move the sun token on his personal board a number of spaces equal to his current “sun movement” level.  This level is increased by the construction of certain buildings.  It begins at a movement rate of two, but can be increased up to 14 … or even infinity if the Power Plant building is constructed.

The sun’s movement clings to the edges of a player’s land tiles.  Thus, with proper land tile placement, it is possible to move the sun so that it shines upon multiple tiles at once, thereby causing them to produce.  When this occurs, a new resource of the appropriate type is placed upon each such enlightened tile.  As mentioned, an illuminated temple will score victory points for itself and all surrounding tiles.  Properly positioning tiles and gaining flexibility in moving the sun is critical in order to produce those vital resources and gain victory points from temples.

Whenever a player causes a complete revolution of the sun, he earns five victory points.  This amount can doubled by the construction of the Watchtower.  Quickly increasing one’s sun movement capability and rapidly moving the sun can be a viable strategy.

When an action tile is taken, it is placed below the player’s board, sorted by appropriate color (red, blue or yellow).  When a player accumulates four tiles of a color, he may immediately take a free action as described above, but does not actually take one of the action tiles.  These extra actions are always very handy, so it is advisable to concentrate on accumulating the necessary numbers to gain this advantage.

Once each player has taken four action tiles and performed the corresponding actions, characters may be purchased.  Only eight characters are available for the entire game, and the supply depletes quickly, often in just two rounds  Characters cost mana to purchase (ranging from 2 – 4), but must be activated in order to secure the benefits they provide.  Activating characters cost a specific number and type of resources as indicated on the tiles.  Once activated, a player will receive the immediate benefits depicted (resources, additional sun movement, mana, etc). Further, at game’s end, the character will potentially provide an abundance of victory points if the conditions listed thereon are met  For example, the Inventor will give an additional five victory points for each bonus tile the player has placed in his world, while the Architect grants three victory points for each temple and building a player has constructed.  Characters are vital and, as mentioned, are scooped quickly.

At this point, new action and terrain tiles are revealed, and players in third or fourth place in the new turn order receive a bonus resource token.  A new round is conducted, and after the fourth round, final victory points are earned and the winner determined.  Final victory points include meeting bonus tile and character requirements, constructing next to the six corner spaces on one’s board, surplus mana, etc.  Thus, there are numerous ways to earn victory points.  A typical game of Helios can usually be completed in just over an hour.

Helios certainly has some interesting features, some new and others quite familiar.  The concept of selecting tiles to perform specific actions is clever, especially when combined with the incentive to collect specific colors in order to perform bonus actions.  Since each action type is limited on a turn and they appear in a random order, players are often forced to adapt their tactics as different tiles are available for selection (remember, a player may only select a tile that is located at the bottom of one of the three rows).

The sun movement aspect is quite clever.  Players must carefully plan the placement of their land tiles so as to insure maximum exposure from the sun.  Maintaining a steady supply of resources is critical.  At the same time, however, moving the sun fast can also earn a considerable amount of victory points, so choices must be made.

The 12 buildings do provide some variety, but the number seems deficient.  Each player usually constructs 2/3 or so of these available buildings.  A greater variety would have added  more strategic paths and options.

The biggest limitation for me is the lack of characters.  As mentioned, there are only eight available for the entire game, and in my games, all but one or two were purchased in the first round.  Thus, there were no more to purchase after the second round, and mana’s usefulness decreased considerably.  Yes, it does take an extra step to activate these characters, but that is usually not problematic.  There should have been more characters available, thereby having some available beyond just the second turn of the game.

Helios certainly has some interesting features and does force players to make numerous important choices throughout the game.  I enjoy the sun movement aspect, as well as the limitation on the selection of action tiles in order to perform specific actions.  I do wish there were more buildings and characters (expansion?) to help keep the game fresh and offer more variety.

What may ultimately condemn Helios for dedicated gamers is that it is good, but not great.  Dedicated gamers will likely have 300+ games already on their shelves competing for table time.  Plus, hundreds of new games are published each year.  Thus, in order for a game to survive, it must be excellent or unique.  Sadly, at least for me, Helios falls a bit short in those categories.  It is good, and I certainly enjoy playing, but it doesn’t rise to the level of greatness.  With so many game choices, that does not bode well for its future in my collection.

That being said, for folks who don’t have a large collection — or don’t mind adding yet another game to their burgeoning collection — Helios is certainly a fine selection.

Larry (2 plays):  I played Helios a couple of times when it first came out and really enjoyed it.  The Sun mechanism is very clever and I like the dramatically powerful abilities you can purchase (which kind of presaged the very powerful player abilities in HiG’s Marco Polo, which came out the following year).  However, I haven’t made a big effort to play it again.  The reason is I have some genuine concerns about the game’s replayability.  As Greg says, with only 8 characters and 12 buildings, it seems as if it would only take a handful of plays to come up with optimal strategies.  At that point, I would think that the game would lose much of its interest.  Maybe that assumption is a faulty one, but the game’s lackluster ratings and buzz, despite a very nice first impression, leads me to believe that it might be accurate.  Too bad, but if I someone asked me to play, I’d enthusiastically agree, since I bet there are still a few more good sessions in it.

Greg Schloesser is the founder of the Westbank Gamers and co-founder of the East Tennessee Gamers. He is also a prolific reviewer of games and a regular contributor to numerous gaming publications and websites, including Counter, Knucklebones, Boardgame News, Boardgame Geek, Gamers Alliance and many others. Greg has been a gaming enthusiast his entire life, growing up in our hobby mainly on the war game side. His foray onto the internet exposed him to the wonderful world of German and European games and now nearly all of his gaming time is devoted to this area of our hobby. He travels to several gaming conventions each year and is the co-founder of Gulf Games, a regional gaming get-together held in the Southern USA. Greg was born in 1961 and lived his entire life in New Orleans before moving to East Tennessee in 2005. He is married and has one daughter (now married.)
View all posts by gschloesser →
This entry was posted in Reviews and tagged Hans im Glück, Helios. Bookmark the permalink.