Essen Day Four: A Summary of Spiel 2016, What Was Hot, and What I Played (Chris Wray)

Spiel 2016 is in the history books!  By this afternoon the halls were emptying out, and the fair was drawing to an end.

This posts covers four topics: (1) my general thoughts on Essen 2016, including publishers/designers that stood out, (2) my final analysis of what was hot this year, (3) a few more scenes from the Messe, and (4) snap reviews of the games I played.  Today was a short day at the Messe for me, filled mostly with last-minute shopping, but I have snap reviews of The Game Extreme, Inis, and Pandemic Iberia.

I had fun at Essen 2016, but I don’t know that there were as many stand out games for me this year as there were last year.  2015 was an exceptionally strong year in gaming — we saw 7 Wonders Duel, Codenames, Food Chain Magnate, Mombassa, Mysterium, Pandemic Legacy, Through the Ages: A New Story of Civilization, T.I.M.E Stories and several others I’m likely forgetting.  Those all made it into the BGG Top 100.  Will 2016 live up to that high standard?  Based on the hotness list below, my initial impression is that this is unlikely, although I guess it is certainly possible.

For designers, I think two stood above the rest.  Friedemann Friese had an exceptionally strong Essen this year, and so did his publishing company, 2F-Spiele.  Fabled Fruit ended up on the Fairplay list, and his two other big titles — Power Grid: The Card Game and Fuji Flush — got a significant number of votes.  PG:TCG and Fabled Fruit also made it into the Top 20 on the BGG hotness list.

Uwe Rosenberg also had an exceptionally strong year.  A Feast for Odin and Cottage Garden were both towards the top of the Fairplay and Geekbuzz lists.  His third title — the two-player Bohnanza: Das Duell — seemed to have sold out today, as I couldn’t find an extra copy to take home with me.

Among publishers, 2F-Spiele stood out because of Friedemann Friese’s games.  But Stronghold Games also generated a lot of really positive press, and many of the games they’re publishing or co-publishing did exceptionally well: Great Western Trail and Terraforming Mars both topped the FairPlay/BGG lists, and Stronghold is doing the English versions of both Fabled Fruit and Fuji Flush.

As of yet there don’t seem to be any surprise hits of Essen 2016.  The final hotness lists, which I discuss below, mostly line up with expectations.

I didn’t get to play as many games as I would have liked, but for me, the standout games were Colony and 7 Wonders Duel Pantheon.

I noticed one more small change in Essen this year, but maybe it is just me.  Last year I was able to pick up several “free” promos for games I already owned.  This year there wasn’t much of that; so little, in fact, that I didn’t do my “Select Promos and Mini Expansions” post like I did last year.  There were still a ton of promos around, but they came with the purchase of a game.  That makes economic sense for the publishers, and I don’t blame them for doing it: I was a bit surprised last year by how many freebies and cheap extras I got!

I don’t know which year had more attendees, but this year did feel a bit more crowded.

And that’s a good thing: it shows just how strong the gaming hobby/industry is in 2016.

Here’s the final Fairplay list, in the order they are listed (see photo below):

The following games also had a significant number of votes, as shown on the bottom list: 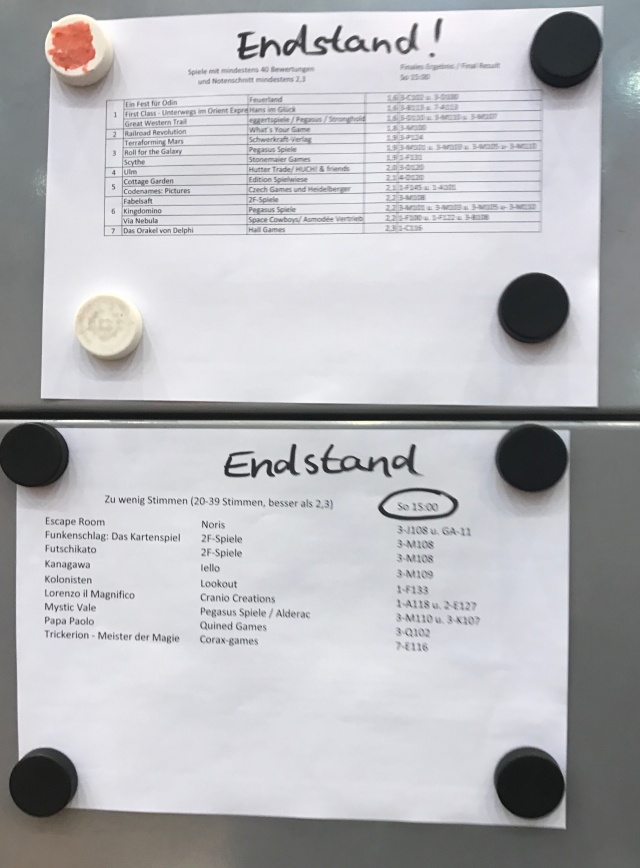 Here’s the BGG top 20 list, in order (keep in mind that this might change over the next few hours/days):

As I’ve mentioned in recent days, my advice to tell what’s hot is to look for overlap between the Fairplay list and the BGG list.

My personal list — which is unchanged from yesterday — is below and is based on my conversations and what I saw people buying.  (Keep in mind that my list has a strong English-language bias, as I only got impressions from talking to gamers that speak English.)

I’m also saw a lot of interest in The Colonists, Colony, Four Gods, Key to the City – London, Lorenzo il Magnifico, Oracle of Delphi, Scythe, and Ulm.  There are also a ton of people buying Codenames/Codenames: Pictures and Isle of Skye, showing the impact of the Spiel des Jahres awards.

And later today I heard a lot of people talking about Honshu.

Scenes from the Messe

The Z-Man demo area was really popular this year: 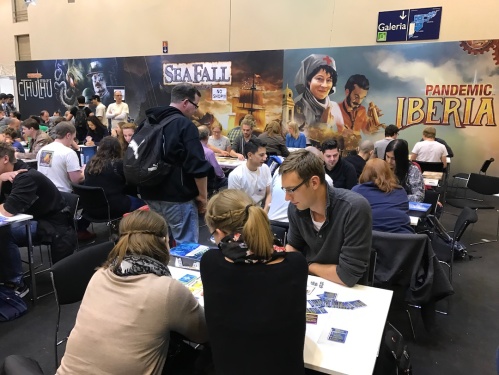 I was late to the scene, but I believe this is the Carcassonne World Championship in progress:

A lot of the companies have designers stop by for an hour or two to sign games.  Most of the time there isn’t a huge line, so you can get a game signed quickly, but folks really came out today to meet Seiji Kanai, designer of Love Letter.  And I saw why: he really gets into signing boxes, and he’s very fun to talk to!  (Pictured below is the new “Love Letter Premium” edition by AEG.)

These are all based on one play, sometimes under less-than-ideal circumstances.  We at the Opinionated Gamers will likely follow up with full reviews, based on more plays at different player counts, in the coming weeks.

I’m a big fan of The Game.  I don’t play it much in physical form anymore — I prefer the solo version on the iPad — but after picking up The Game Extreme today, I’ll revert back to the physical game for a while (including possibly on the plane tomorrow).

This is largely similar to The Game, only now 28 cards have “commands” (7 commands x 4 cards each) on them that change gameplay.  The commands are activated when the cards are played.  There are three “lightening bolt” commands that apply only to the current player: one forces him to stop playing, one forces him to put down exactly three cards, and the last (showing a scull and crossbones) forces you to immediately cover it.

There are also four “infinity symbol” commands that affect not only the current player, but future players as well, at least until they are covered.  One prevents speaking at the table, one cancels the “backwards trick” (i.e. the jump back by 10), one forces play all on one stack, and one forces hand replenishment down to just 1 card.

You are free to talk about the commands you have, or about which ones you would prefer not be played.  As normal, though, you’re not allowed to talk about specific numbers.

If you like The Game, I think you’ll enjoy this.  Did it take an already difficult game and make it impossible?  Absolutely.  But I think that was the point: this is the Extreme version, after all.  Just go in knowing that you’re almost certainly going to lose!

Dale did a preview of Inis, so I’ll keep this short.  Inis is a celtic-themed card drafting and area control game, and like many of Matagot’s big box games, it is a well-produced “men on a map” game.

Players draft cards showing actions they can take, and then on their turn they can play the card, pass, or, assuming they meet a victory condition, take a “pretender” token and try to win the game.  Players are trying to (a) control territories where at least six other player pieces are under their control, (b) be present in territories with six or more sanctuaries, or (c) be present on six or more territory tiles.

The first thing I noticed about Inis is the artwork, which is beautiful.  It seems to be impressionism mixed with Celtic-style art.  It isn’t what you normally see in boardgames, and I think it worked well here.

Then I noticed how clever the gameplay is.  This is equal parts setting yourself for victory while preventing your opponents from doing the same, and then towards the end, the gameplay becomes really tense.

The rules are simple, yet the gameplay affords plenty of interesting decisions.  You could teach this in five or ten minutes and then start playing.

I’m bringing home a copy, and I think this will be a hit in my game group.  It plays decently quick (60-90 minutes), and other Matagot tiles (Cyclades, Kemet) have gone over well, so I expect this will too. 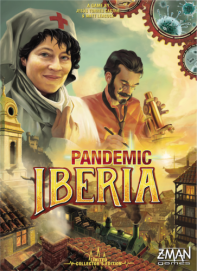 Pandemic Iberia feels a lot like Pandemic, but with some clever twists, and I think fans of the series will enjoy what Matt Leacock has done for this special edition.

There’s obviously an all-new map featuring the Iberian peninsula.  The map has fewer places to travel than in the original game, but it is also initially a bit more difficult to travel between parts of the map.  Whereas in Pandemic you can fly around the world, here, that technology was not yet invented.  The only way to fast travel at the start of the game is by ship, which allows movement between port cities.

But fear not: players can make it easier to travel by building railway line!  Building a line costs an action, and then players can move as far as they’d like across an existing line for only one action.  This helps quite a bit in moving around the board.

According to the person that taught me the game, it comes with a couple of historic scenarios that are quite challenging.

I preordered this months ago, so I didn’t buy it at Essen, but I’m really excited for my copy to come.  I’m a huge fan of Pandemic, and while I’ve been having fun with Pandemic: Reign of Cthulhu, this will be where I turn next.  It feels fresh, and the decisions about where/when to build the railroads is fascinating.  I’m also excited to try the scenarios.