Rival treasure hunters (i.e., players) have discovered the Temple of Codinca while exploring the Yucatan rain forests.  To open the Temple and find the great treasures contained within, players must use various mechanisms to manipulate a grid of sixteen carved Symbol Tiles to match specific Key Patterns.  The first player to match their own Symbol Tiles to their four Key Patterns will unlock the secrets of Codinca.

Codinca is an abstract strategy game that combines skill and chance.  Players take turns using various actions (e.g., flipping, swapping, and shifting) to manipulate a common grid of tiles to create patterns that match their individual Key Cards.  The game is meant to be fast-paced and tactical.

Codinca was first available as a pre-production release at the Essen Game Fair (Spiel) in 2012.  Only 150 copies were available and it sold out.  A Kickstarter campaign was launched in September 2013 to fund a full production release, but it failed to reach the necessary goal.  The game largely disappeared until it re-debuted at the 2016 UK Game Expo in new pocket edition.  According to the announcement from the publisher, “the mechanics have been streamlined, the tiles made substantially chunkier, the rules include six languages (English, French, German, Dutch, Spanish & Polish), and it all comes in a very pretty pocket sized magnetic closing box.”  This review is for the new 2016 release of Codinca.

The game includes the following components:

There are four sets of four Symbol Tiles in Codinca and each player chooses one to control during the game:

Each tile has the corresponding Symbol engraved on each side.  The Symbol is colored white (representing Stone) on one side and yellow (representing Gold) on the other.  Regardless of the number of players, all sixteen Symbol Tiles are used and are placed in a 4×4 grid on the table according to the diagram depicted inside the box lid.  This starting configuration ensures an even start for each player.

The player wearing the most gold is the starting player.  On a turn, the player takes two basic actions in any order/combination.  The available basic actions are as follows:

In addition to taking two basic actions, the player may play one or more Spirit Cards at any time during their turn.  Each player has three Spirit Cards that can each be used once per game to perform extra special actions during the game and can be critical to winning.  Each Spirit Card can provide one of the following three possible special actions:

Finally, a player can match a Key Pattern.  If the player’s Symbol Tiles in the grid match the pattern (both in position and colors; the Key Card can be rotated either direction) on one of their Key cards, then the player shows the Key Card for verification and then places it face down in front of them to show that it has been completed.  A player has the opportunity to match a Key Card at different times:

A player may not immediately reverse the last exact action taken by the previous player.  The tiles involved in the preceding action are not locked and can be manipulated again, just not back to the way they were previously by the same exact action.  For example, Tile A switched with Tile B through the Switch a Tile action cannot be switched back using the Switch a Tile action again.  However, it is possible to effectively do so using a different action (e.g., use a Spirit Card to shift the entire row in the desired direction).

Players continue to take turns in a clockwise order around the table a player successfully matches all four of their Key Cards.  The game then ends immediately.  That player has unlocked the Temple of Codinca and is the winner of the game. 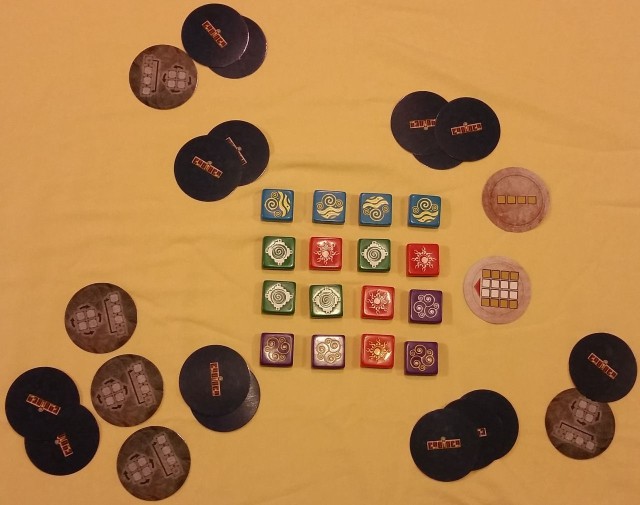 Craig V: My first play of Codinca was a four player game.  Each player working to align tiles to match specific patterns at the same time all of the other players are doing the same can make for chaotic play since the board can change drastically in the three turns that occur before it’s your turn again.  Lack of control is frustrating because of the push and pull occurring from multiple angles.  It seems possible that players could battle back and forth trying to meet their individual goals and in the end neither succeed.  Luckily, that did not occur during our game.  It’s also surprising how a single Line Push or Trap that flips the tiles across the board can unexpectedly free everything up.  Although this is meant to be an abstract strategy type of game, it’s probably best played in a more casual manner, especially with four players.  We are very experienced hobby gamers, but played pretty fast and loose and were able to finish a four player game in about 30 minutes or less.

One of my other plays was with three other family members that are very infrequent gamers, and the experience was much the same as my first four player Codinca experience.  Each player had a moment of frustration during the game between turns due to the dynamic nature of the tiles.  The back and forth seems agonizing at times, but then a single action can dramatically alter the entire board and suddenly things feel good again.  This particular game was also played friendly and casual rather than cutthroat and mean.  The game played out in less than 30 minutes as well, and everybody enjoyed the experience.

I enjoyed playing Codinca most as a two player game.  Fewer players reduces much of the unintended back and forth.  That allows just enough space in the board for more strategic planning since the tiles aren’t changing so much between each turn.  It also feels less random/unfair when a player is able to match a Key card at the end of the other player’s turn since that player’s turn is automatically over and it’s back to the previous player for another turn. Two player games of Codinca only take about 15 minutes to play completely.  It is an engaging experience without being too stressful, so it’s a compelling choice to just play another game after the first.

With respect to production, Codinca is nice little package overall.  The box has a magnetic closure and is bar-shaped with dimensions of only 5.9” x 2.9” x 2.0”.  It’s just big enough to hold the game components with no wasted space.  While it’s a small package, it’s not quite “pocket-sized” due to its blocky shape.  The tiles are thick and nicely engraved, but some of the paint used to accent the Symbols could be better since the white and yellow can be difficult to distinguish and/or are different shades on a few of the tiles (this seems to be most noticeable on the red Fire tiles).  The thin cards are sufficient since they are generally just held and shown rather than being actively used and frequently shuffled.  The rules are well-written and easy to follow and only fail to explicitly address a couple small details (these I tried to clarify in the game play explanation included in this review).  With an MSRP of just under $20, the game is attractively priced.

The rule set for Codinca is straightforward and the game can be taught in five minutes or less. Setup is also very quick, so it takes no time at all to get a game underway.  Although it is an abstract game that could be played in a very serious manner (think Chess or Go), I really enjoyed playing it with more spontaneity rather than lengthy calculated moves.  The Spirit Cards create enough randomness that the game play becomes more tactical than it is strategic (especially with more players) anyway.  Overall, the puzzle aspects of the game appeal to me and I enjoyed my experiences playing Codinca.

Dale Y: I have played this a few times now – first at the Essen when it originally came out, and then now in 2017.  My feelings back then are the same as now – it’s a decent little abstract game, but one that I don’t know if I’d want to play with more than 2 players.  The game has the potential to grind to a halt if players choose to block the next player.  You only get three special action cards, and you must score  four scoring cards to win the game.  Unless you’re extraordinarily lucky (or have a similar scoring card to the player prior to you in turn order), you’ll often need to spend one of the special action cards in order to create a valid scoring combination.  If you use them for your first three combinations, you’re kind of in a pickle for the final one.  The player behind you should be able to remember what pattern you need to score, and if nothing else, should be able to stop you from being two moves away from that arrangement.  Because, the gamer in me will say – if I can’t win this turn, I should at least stop Dr. Lucky from winning on his next turn so that I have another chance to try to win on my next turn.  Of course, they might want to actually work on getting towards their own scoring arrangement, so it’ll fall apart at some point – but you might have a number of turns where you’re slowly moving towards the line that you need to score and then watching the next 3 people slowly move you away from that position, only so that you can claw back closer on your turn.  It’s just an unsatisfying way to end a game which starts out so much better.  With fewer players, there is less intervening action between turns and more chance that everyone works towards their own goals.

I'm an outdoor adventurer, kettlebell/strength enthusiast, foodie/beer guy, and a touch of geek all rolled together. Some of my many interests include: beer, homebrewing, fitness (kettlebell and barbell), travel, food and cooking, hiking, backpacking, camping, canoeing, kayaking, stand-up paddleboarding (SUP), letterboxing and board and card games, of course!
View all posts by Craig V (shigadeyo) →
This entry was posted in Reviews and tagged Cards, codinca, Family games, Kickstarter, Puzzles, review, reviews, tiles. Bookmark the permalink.